The countries most affected by global warming, based on natural disasters

Global warming has intensified natural disasters in recent years, including earthquakes, superstorms and wildfires. But which countries are most affected by these hazards? Uswitch investigates.
Share this guide

In recent years, climate change has increased the intensity of natural disasters such as floods, storms and wildfires. But which countries are most susceptible to these hazards? To find out, the energy comparison experts at Uswitch analysed data between 1902 and 2021, which included over 15,000 recorded natural disasters. A total score was then calculated by using the average percentrank across four different categories: number of people affected, fatalities, disasters and damages. 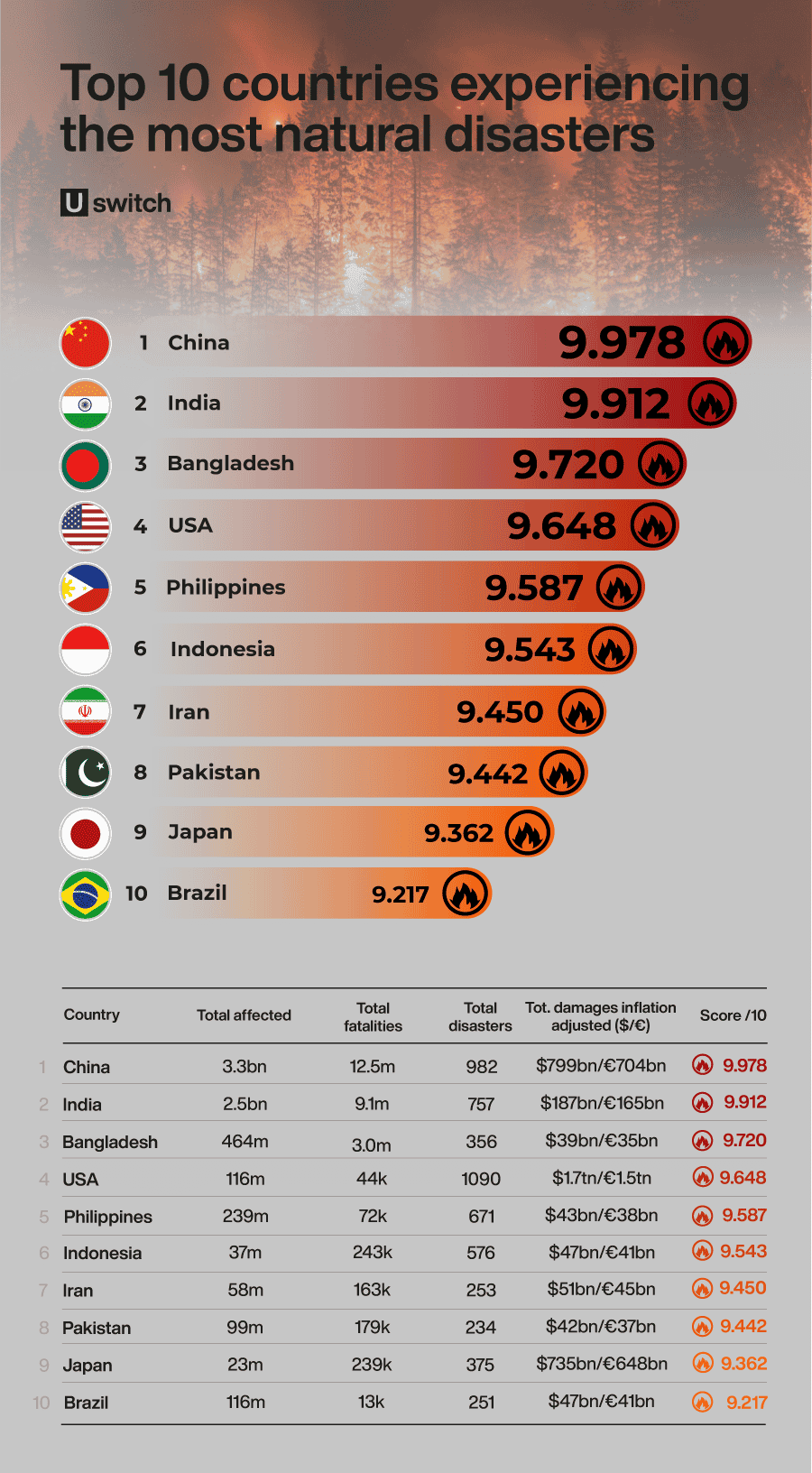 China comes out on top with a score of 9.978, having been ranked first for both total number of people affected (over 3.3 billion) and second-highest estimated economic damage (almost $800 billion or €704 billion). Global warming has contributed to this country suffering from more droughts than any other country on our list, with 39 recorded events since 1902.

India is in second place among the countries most affected by global warming with a score of 9.912. There are 60 cases of extreme temperature events recorded in India which makes it the only country in the top 10 to experience glacial lake outbursts.

Bangladesh comes in third with a score of 9.720. Out of the 356 natural disasters recorded, almost 80% have been either floods or storms. In total, 464 million people have been affected by these events and cost $39 billion (€35 billion) in damages.

In fourth place is the USA with a score of 9.648. This nation experiences more natural disasters than any other country and the highest amount of economic impact, at an astounding $1.7 trillion (€1.5 trillion) - about 8% of its GDP. Because of the effects of global warming, the USA suffered from 685 recorded storm events which is the most in the world.

In fifth, sixth and seventh position are the Philippines, Indonesia and Iran. These Asian countries have scores ranging from 9.587 to 9.45 in terms of natural disasters. Volcanic eruptions are one of the most common hazards across these three countries, with 60 recorded in Indonesia, followed by earthquakes.

With a score of 9.442, and in eighth place, is Pakistan. Almost half of its natural disasters can be attributed to floods, with the remainder being made up of mainly storms, landslides and earthquakes.

In ninth position is Japan, with a score of 9.362. The islands have been hit by more than 400 natural disasters since 1902, causing more than $735 billion (€648 billion) in damages. Storms account for almost half of its disasters, while earthquakes, floods, and landslides make up the rest.

Completing the top 10 countries experiencing the most natural disasters is Brazil, with a score of 9.217. Compared to other countries in this list, its economic impact of $47 billion (€41 billion) is modest, as it represents only 3% of its total GDP.

Energy expert Will Owen says reducing your carbon footprint is one way to help slow the rate of global warming:

“Carbon dioxide is a greenhouse gas - as it builds up in the Earth's atmosphere, it traps sunlight that is reflected back into space, warming the planet. 'Global warming' refers to these issues, as well as the potentially harmful effects of a warmer planet.

According to the Energy Saving Trust, domestic properties produce 30% of the CO2 emitted annually, so reducing household carbon emissions would make a big difference to our overall carbon footprint and help to halt the effects of global warming."

Learn more on how to reduce your carbon footprint. 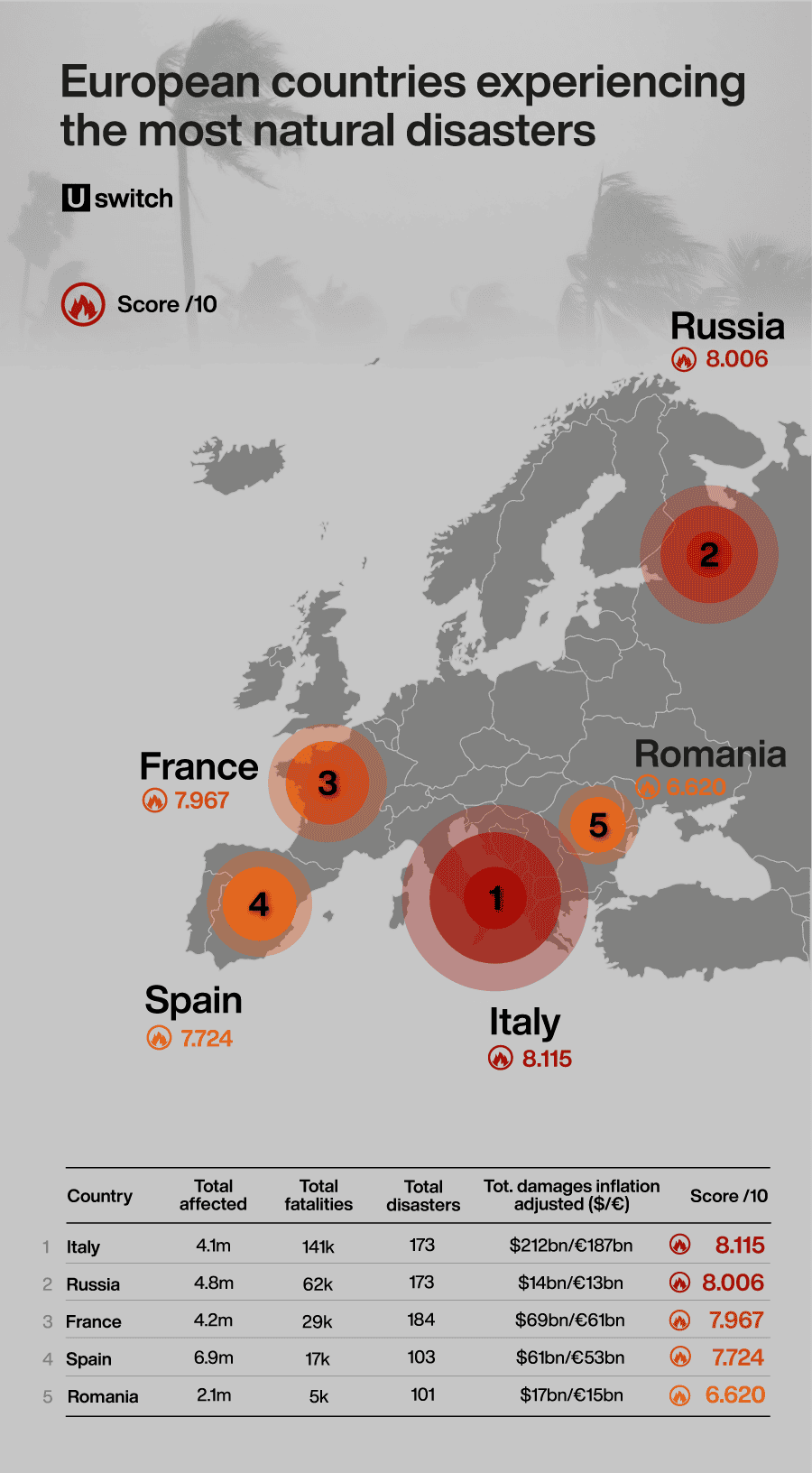 Italy is the worst affected European country for natural disasters, with a score of 8.115 - since 1902, there have been a total of 173 disasters. The economic damage suffered by Italy from these hazards is three times that of any other European country in the top five, at $212 billion (€187 billion).

Russia, second in the European rankings with 8.006, has experienced the same amount of natural disasters as Italy. Global warming has meant that this nation experiences the most floods and wildfires across Europe and the only recorded extra-terrestrial natural disaster of all the countries in our study - the Tunguska Fireball.

France is ranked third with a score of 7.967. With the highest total disasters in the top five, the economic damage is around $69 billion (€61 billion). Out of these disasters, France experiences storms the most (71), followed by floods with 57 recorded since 1902.

Spain comes in at fourth with a score of 7.724. The influence of global warming has resulted in 53 recorded floods, 43 earthquakes and 30 storms in this country. The location and geography also mean that there have been 16 landslides since 1902.

Completing the top five is Romania with a score of 6.620. Similar to the rest of Europe, natural disasters like floods and extreme temperatures are the most common as a result of climate change.

Just outside of the top five, but still being heavily impacted by global warming, is Greece, namely from earthquakes (44), floods (26), and wildfires (15). In 2021, Greece experienced widespread wildfires which left many without homes and an immense amount of financial cost needed to rebuild the affected areas. In total, across all natural disasters since 1902, the cost of damages sits at over $24 billion (€21 billion).