The Cities With The Most Beautiful Green Spaces

Gardens and parks in cities look beautiful and also soak up carbon emissions, which means they’re great for the environment too. But which city has the most beautiful green spaces in the world?
Share this guide 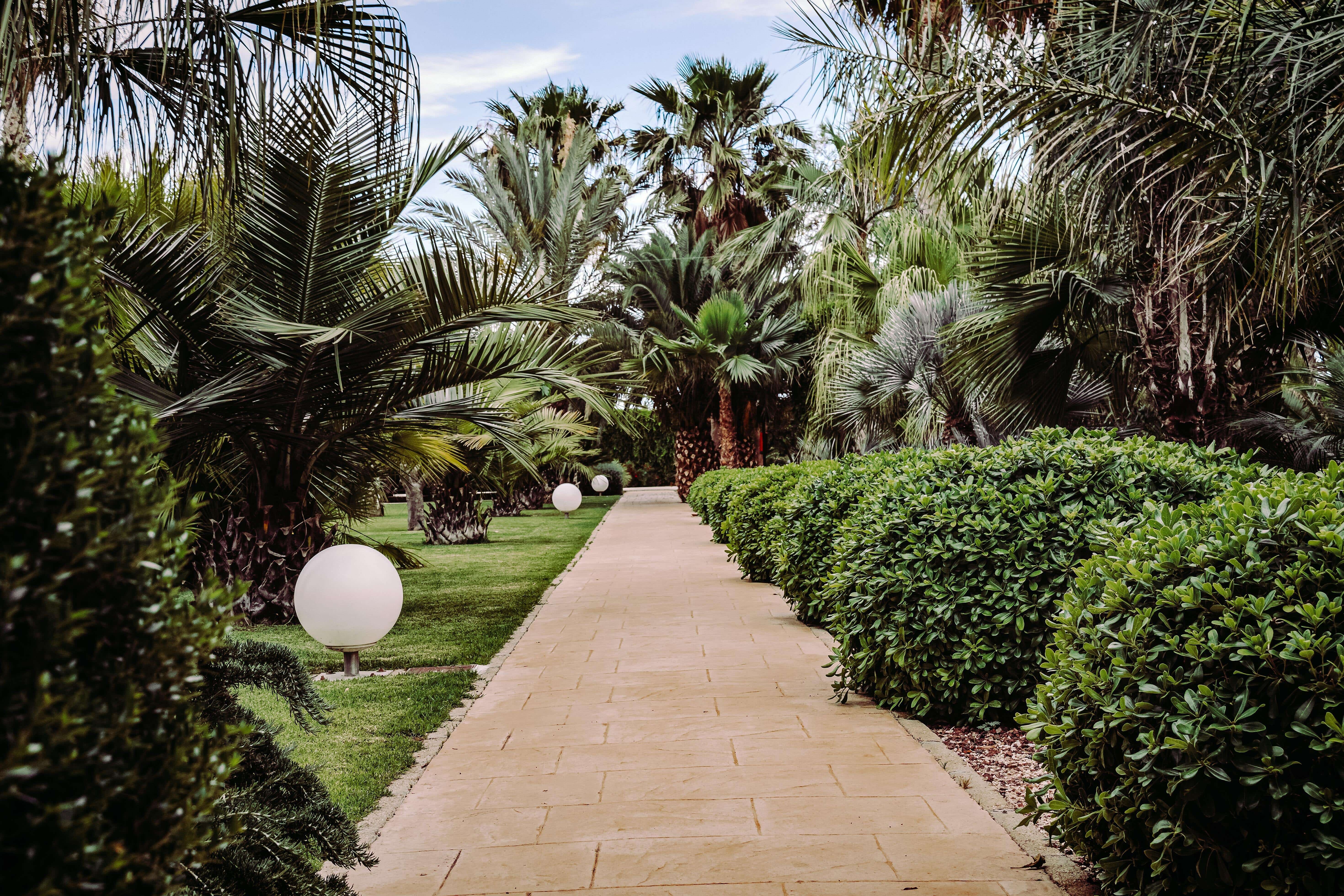 When you think of a cityscape, most of us would probably imagine a scene of tall buildings forming a concrete jungle. However, as our attention turns to the environmental impact of metropolitan lifestyles, city councils are keen to create more green spaces as a way of absorbing carbon emissions.

This is a global movement encouraging cities to grow more trees and plan more parks, resulting in some cities transforming over a third of their total area into green spaces2. According to the World Economic Forum (WEF), Tampa in Florida is the city with the highest density of greenery (36.1% trees) helping to reduce the carbon emissions of urban living3.

Curious to discover which city is home to the best picturesque parks and gardens on the planet, the Uswitch energy comparison experts combed through TripAdvisor to uncover the top rated parks in the world’s largest cities, and then analysed Instagram data to see which ones are the most Insta-worthy.

If you’re conscious about your lifestyle and the impact it may have on the environment, use our carbon footprint calculator to discover the ways you can minimise your emissions and waste.

The most picturesque parks that are helping their cities breathe

New York’s Central Park is revealed as the world’s most Insta-worthy park. With over 7.9 million hashtags on Instagram (and over 5 million more than the park in second place), the vast green space wins the crown as the most picturesque city-based park by a landslide.

Central Park is also cleaning up the air of the bustling New Yorker lifestyle, thanks to the 18,000 trees that live there. It’s estimated by the Conservancy Tree Care team (the people nursing the trees in Central Park) that roughly one million pounds of carbon dioxide is removed from the city’s air each year by the 18,000 trees.

Nestled in the heart of Manhattan and brushing shoulders with the fashionable Upper East Side, Central Park takes up a huge 843 acres of New York City. It’s estimated to receive 42 million visitors every year, so it’s no surprise that it has featured on the photo-sharing app so many times. It is also the backdrop to many popular TV shows and films - Gossip Girl, Home Alone, When Harry Met Sally, to name a few - making it an even more iconic place for tourists to visit and photograph.

The second-most picturesque park in the world is Hyde Park in London and it’s racked up an impressive 2,363,707 hashtags on Instagram thanks to its beautiful scenery. According to Treeconomics and The Royal Parks, the 4,000 trees in Hyde Park remove a total of 2.7 tonnes of pollutants each year and store an impressive 3,900 tonnes of CO2, preventing it from lingering in the London air5.

Apart from working hard to remove emissions from London air, it also has a sprawling lake where guests can hire pedal boats, and it is home to the Princess Diana Memorial Fountain. Originally a hunting ground for Henry VIII in the 16th century, it continues to have a huge appeal for tourists in 2022.

Hangang Park (한강공원) in Seoul, South Korea is third on the list. It is made up of 12 parks in total and it is one of the only spaces where you can escape the hustle and bustle of the city. Despite the official number of trees homed in this park not being shared, just last year The Seoul Metropolitan Government planted 90,000 trees in the park in aid of tackling fine dust, car emissions and noise pollution.

It is made even more tranquil by the art installations placed around the park, as well as waterside views of the Han River. It has been shared on Instagram nearly 750,000, with a lot of the posts featuring tourists posing beside the iconic ‘SEOUL’ sign.

Two Californian-based parks take fourth and fifth place on the world’s most picturesque green spaces. Los Angeles’s Griffith Park, which was featured in the critically acclaimed film La La Land, is fourth on the list with over 493,000 Instagram hashtags. Interestingly, LA is another city listed on the World Economic Forum’s list of cities that are most densely populated with greenery (15.2%).

Griffith Park is one of the largest municipal parks with urban wilderness areas in the United States with a great variety of carbon-absorbing plants on offer; from coastal sage scrub at the lower end of elevation right up to Californian species of oak, walnut and mahogany trees.

San Francisco’s Golden Gate Park is fifth on the list with nearly 487,000 hashtags. Although that seems an achievement in itself, it’s also got great eco-credentials. Despite the official number of trees in the park being unknown, it is estimated to be around 130,000 with the most common tree varietals being Monterey cypress, Monterey pine, and eucalyptus9. This is great news for the people of San Francisco, as eucalyptus trees can store up to 15.7 tonnes of CO2 per hectare, per year, which means these pretty-to-look-at trees are also working hard to clean up polluted air.

Making up the rest of the top 10 most beautiful eco-spaces are two Spanish parks; Barcelona’s Park Güell (famously designed by the renowned Antoni Gaudi) is sixth as a result of 431,577 Instagram posts featuring the hashtag #ParkGüell. Many of the pictures shared are people admiring the views from the hillside garden and the incredible artistry of Gaudi. Barcelona is currently in the midst of fulfilling their Green and Biodiversity Plan, with targets to plant 235,000 trees in an urban area, ensure 17.71 m2 of green area per capita, and to create 54 spaces of natural interest within the city centre11.

The other Spanish green space to make the top 10 list is Parque del Retiro - located in Madrid and ranking in ninth place, this park was recognised for its splendour in 2021 when it was named a UNESCO World Heritage Site. The park covers over 125 hectares and homes more than 15,000 trees12, including a series of sculptured cypress trees that visitors regularly share on Instagram. With this impressive number of trees on offer, they have the potential to clean up over 833,000 pounds of carbon dioxide from the city of Madrid.

Sao Paulo’s Parque Ibirapuera is seventh with 371,104 hashtags on Instagram, Tokyo’s Shinjuku Gyoen National Garden is eighth with 351,842, and Bosque de Chapultepec in Mexico City rounds off the top 10 most beautiful parks list with 317,756 hashtags.

Interestingly, no other British-based park or garden features in the top 20; however, there are many more American green spaces on the list. Chicago’s Millennium Park is 13th with so many tourists trying to get pictured next to The Bean (the iconic silver bean in the middle of the park), closely followed by Atlanta’s Piedmont Park with 241,710 Instagram hashtags in 14th.

“Our outdoor spaces have become more valuable than ever since the start of the pandemic and it’s easy to understand why – with so much time spent indoors, having access to a big wide-open space to breath fresh air, and relax and unwind in, is hugely beneficial to our mental and physical health.

“There are some incredible parks and green spaces around the world, and we wanted to highlight some of the most beautiful ones for people to visit.

“Green spaces also provide many benefits for the environment too, including improving air quality, decreasing air pollution, noise reduction and cleaning up contaminants. So parks and green spaces really are some of the most important parts of our cities.

“If you’re keen to find other ways to help the environment and reduce your lifestyle’s impact on the planet, a great place to start is with our carbon footprint calculator to discover the ways you can minimise your emissions and waste.”

Simply put, yes. Trees absorb CO2 via photosynthesis, which is the act of converting inorganic compounds into fuel for living organisms and provides energy for plants to live and grow.

Trees absorb light into their leaves, draw up water through their root system and take in carbon dioxide through the tiny holes in their leaves while putting out oxygen - essentially, they recycle the air.

Green spaces can refer to many different things. Parks are a great example of green spaces, as they are typically grassy areas that include the trees and flowers that benefit our environment.

Any kind of vegetated land within an urban area can be defined as a green space, including parks, gardens, playing fields, children's play areas, and more.

Green spaces are important not just for the mental and physical wellbeing of residents who live near to them, but also for the environment. Green spaces in urban settings can mitigate the effects of pollution and reduce the amount of carbon dioxide lingering in the air of polluted cities.

It also helps to reduce the heat generated by human activity, including public transport, people, shops, and general industry. Green spaces can help to reduce temperatures by absorbing excess heat.

There are many things we can do at home to ensure we are reducing CO2 emissions where we can. We can start by making our homes more energy-efficient - from draftproofing windows to installing heat pumps, we can make really make a difference with just a few changes. Reducing the amount of red meat that we consume can also help to make a difference.

Switching to an electric vehicle is another easy way to reduce our carbon footprint, but as they come at a considerable cost, you can also try alternative methods of transport such as local bus routes, walking and cycling.

Using the WorldPopulationReview to source a long list of the world's 100 most populated cities: https://worldpopulationreview.com/world-cities we ran each one through TripAdvisor, selecting the 'Top Rated Parks' to discover the top rated in each city.

We ran the name of each park through Instagram to discover which ones have been shared the most. If some parks are given multiple names (e.g. locals referring to it differently than tourists would) we ran both names through Instagram and totalled the figures to give a more accurate representation of the number of times the park has been shared on the platform.

The parks were then ranked according to the number of hashtags, with the winner being crowned the most beautiful. As Instagram is inaccessible in China, no Chinese parks were included in the study.

To calculate the amount of carbon dioxide absorbed by the parks, we took the size (in acres) of each park multiplied this by the estimated number of CO2 that urban soil can absorb (based on estimations from experts at Science Daily: https://www.sciencedaily.com/releases/2016/12/161213074347.htm) The calculation being per 1 acre = 55.5lbs of CO2 absorbed.

1.Friends of The Earth UK: https://policy.friendsoftheearth.uk/insight/englands-green-space-gap