The songs that have caused the most carbon emissions

Did you know that jamming to your favourite Katy Perry song or relaxing to Beethoven's 5th causes CO2 emissions in the atmosphere? Uswitch reveals which most popular songs are guzzling the most electricity and causing the most significant environmental damage.
Share this guide

Listening to our favourite tunes is the most popular form of entertainment in the world. While it’s not typically considered an environmental issue, it does have an impact on the environment.

With billions of people worldwide listening to music every day, all this consumed energy contributes to global CO2 emissions. We wanted to find out what this damage was. In addition, which songs are proving to be the biggest climate criminals?

The green energy comparison experts at Uswitch have studied the carbon footprint of the most popular chart-topping songs. Chart rankings are based on sales (physical and digital), radio play, and online streaming.

With over 200 songs selected, using various filters, we whittled this down to look at the top 10 guzzlers of electricity, causing the most CO2 emissions. We also identified how many trees are needed annually to mitigate the CO2 damage caused by each song.

Top 10 most popular songs causing the most CO2 emissions 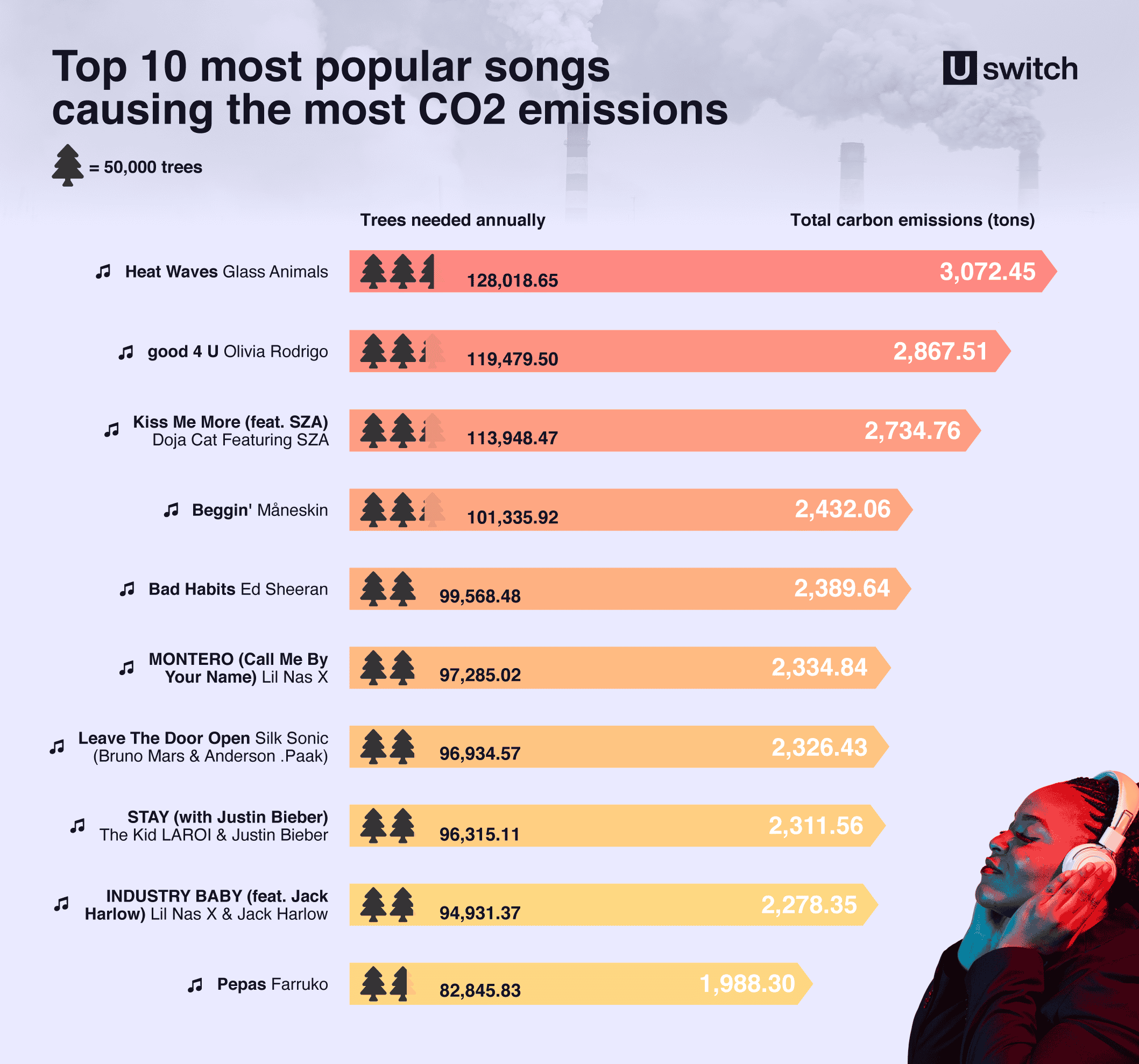 Straight into number one is ‘Heat Waves’ by Glass Animals, producing 3,072 tons of carbon emissions with just over 128 thousand trees needed to absorb the output in one year. According to Billboard, the London-based group created this melancholy hit in just one hour during a late night studio session. However, with a playcount of 842 million and a duration of 3.98, that equals an astonishing 6,376 years of playing time.

‘Good 4 U’ by Olivia Rodrigo just misses the top spot with a total emissions count of 2,867 tons. This 3-minute track topped the UK chart for five consecutive weeks and has been played over a billion times globally.

In third place by Doja Cat and featuring SZA is ‘Kiss Me More’ with 2,700 tons of emissions produced. Released in April 2021, the song requires almost 114 thousand trees to be planted to make up for the emissions caused.

‘Beggin’ by Maneskin is next with 2,432 emissions and just over 100 thousand trees needed to counteract its impact. Originally recorded by the Four Seasons back in the '60s, this version from Italian rock band Maneskin makes it to fourth place on our list.

Famed for his auburn locks and songwriting skills, Ed Sheeran drops into fifth position with ‘Bad Habits’. Our research shows it has a total emissions count of 2,389 tons and over 99 thousand trees needed.

In sixth and seventh place, we have ‘MONTERO’ by Lil Nas X with 2,334 tons and ‘Leave The Door Open’ by Silk Sonic producing 2,326 tons of emissions. Both have a combined tree count of just over 194 thousand to combat the environmental damage caused.

Rocking into eighth place is ‘STAY’ by Kid LAROI and Justin Bieber with over a billion views and 2,311 tons of CO2 emissions emitted as a result. Almost 97 thousand trees are needed to counteract its impact on the environment.

‘INDUSTRY BABY’ (feat. Jack Harlow) by artist Lil Nas X, the second time he’a appeared on this list, with a total emissions count of 2,278 tons and 95 thousand trees needed to be planted to absorb the emissions. ‘INDUSTRY BABY’, produced by Kanye West, plays its way into number nine on this list.

The song causing the fewest emissions in our top 10 list is ‘Pepas’ by Farruko. The music has been played over 453 million times, almost half the play count as our first place. Almost two thousand tons of emissions and 83 thousand trees are needed to prevent the damage caused. 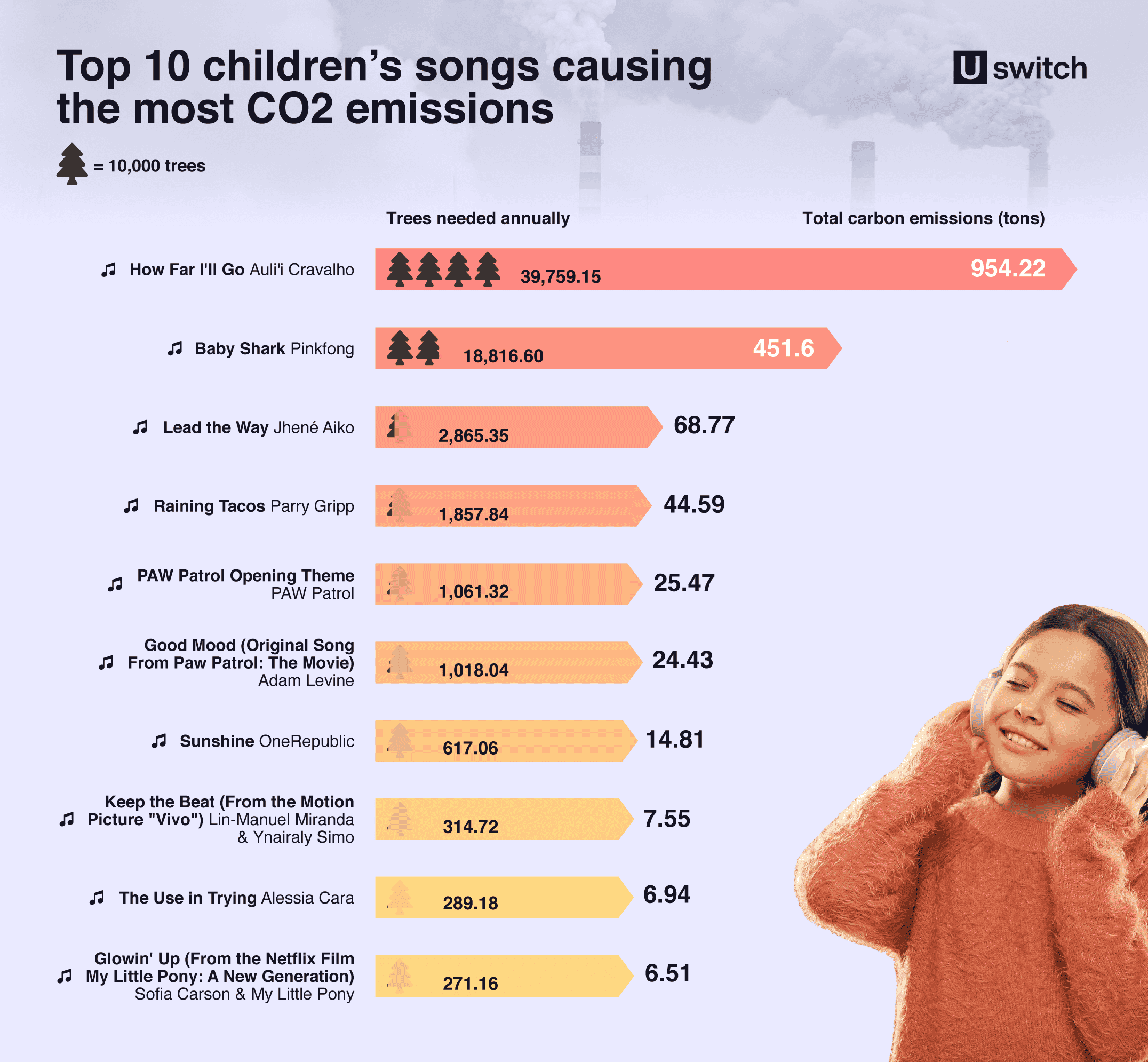 For those who have children, it's easy sometimes to stick on their favourite lullaby if they get restless. However, you might think twice when you realise the environmental impact this is having.

We analysed our data to find the top 10 children's songs causing the most CO2 emissions.

In first position is 'How Far I'll Go' by Auli'i Cravalho, producing a more respectable number of emissions than the previous category with 954 tons. However, almost 40 thousand trees are still needed to be planted to mitigate environmental damages caused.

In second place is the viral hit 'Baby Shark' song by Pinkfong. The song came out in 2015 but didn't become a viral hit with families worldwide until 2017. With a low duration of only one minute and 35 seconds, total emissions dropped down to 451 tons.

Taking third position is 'Lead The Way' by Jhené Aiko, a song featured in the movie Raya and the Last Dragon. With a heavily reduced play count of just over 20 million, the song causes just 68 tons of emissions.

First becoming popular due to inclusion in ROBLOX, an online platform game, 'Raining Tacos' by Parry Gripp is next, coming in fourth, with 44 tons of CO2 emissions generated and almost two thousand trees needed to counteract the CO2 impact.

The theme song to the popular children's programme PAW Patrol slides into fifth position. With a play count of 41 million and the lowest duration time we have featured on any of these lists, with 68 seconds, it is responsible for only 25 tons of carbon emissions. Although, this still equates to just over one thousand trees needed.

With 10 tons of fewer CO2 emissions, 'Sunshine' by OneRepublic dropped into seventh place with 14 tons emitted. This single was released as part of the soundtrack to Clifford the Big Red Dog in 2021.

The bottom three in this top 10 are; 'Keep The Beat' (from the film Vivo) by Lin-Manuel Miranda & Ynairaly Simo (7.5 tons), 'The Use In Trying' by Alessia Cara (7 tons), and 'Glowin' Up' by Sofia Carson & My Little Pony (6.5 tons). All produce under 10 tons of CO2 emissions, with 875 trees combined needed to counteract the effects of CO2. 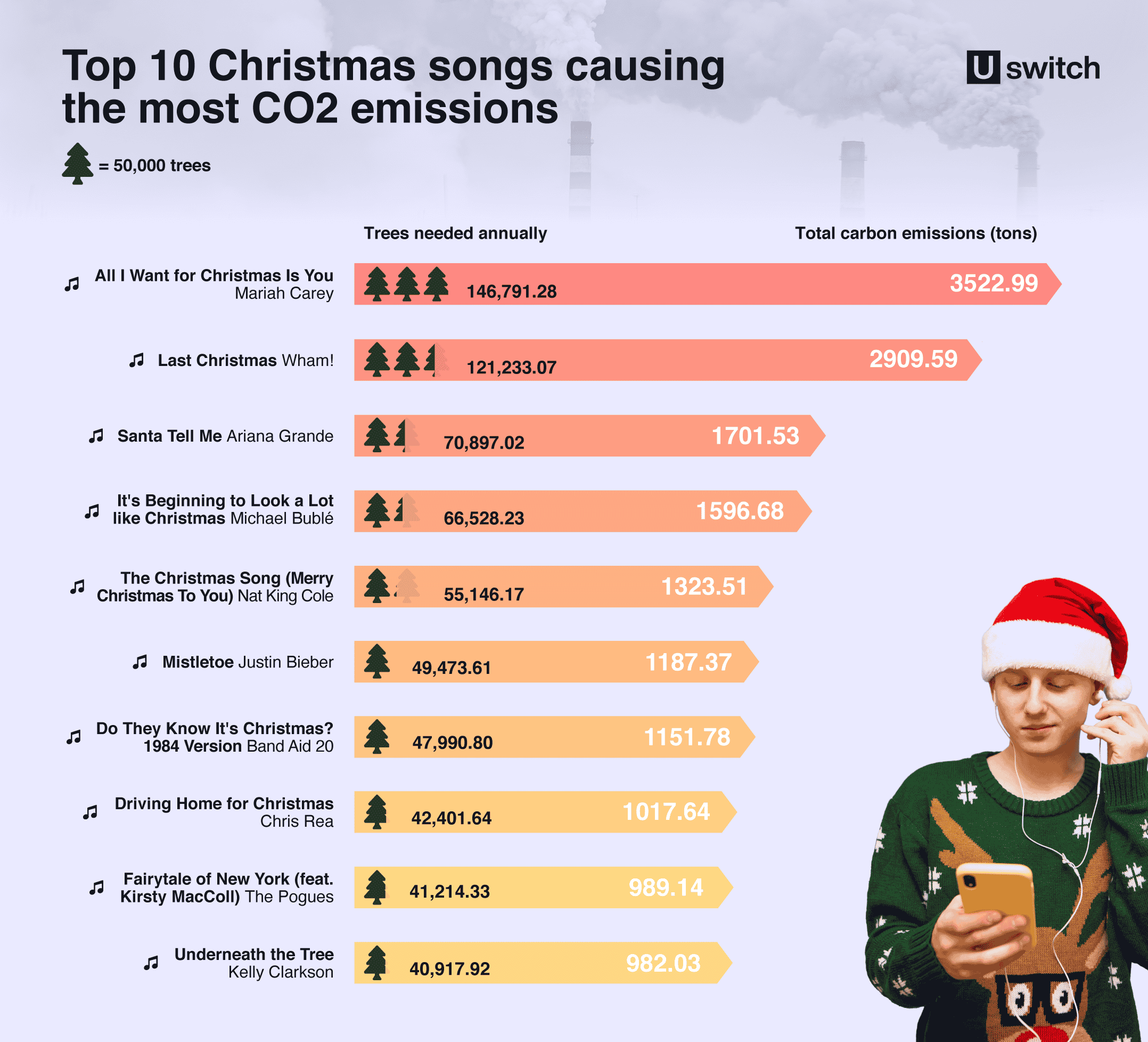 Leading the way in the top 10 most popular Christmas songs list and causing the most CO2 emissions is 'All I Want For Christmas Is You' by Mariah Carey. This chart-topper made its debut in 1994 and has become one of the most popular Christmas anthems every year. Since its release, the song has been played 956 million times in total, producing over 3 thousand tons of emissions. To combat this damage almost 147 thousand trees will need to be planted.

'Last Christmas' by Wham comes in second and is another popular hit year on year with a play count of 724 million and a total of 2,900 tons of CO2. It may shock you to know, but according to Mental Floss, 'Last Christmas' isn't about Christmas at all. It is about a failed relationship that just happens to have begun at Christmas time.

In third position is 'Santa Tell Me' by Ariana Grande, and with almost 240 million views on YouTube alone, it has made its way into our top 10. 'Santa Tell Me' requires 71 thousand trees needed to hit back against the 1,700 tons of CO2 emissions produced.

Swinging its way into fourth position is Michael Bublé's 'It's Beginning To Look A Lot Like Christmas' with a play count almost half that of first place on this list (almost 506 million views) and with 1,600 total emissions produced.

Next is 'The Christmas Song' sung by Nat King Cole - a warm Christmas track that will get even the hardiest Scrooge into the festive spirit. With a duration of three minutes, 20 seconds and a play count of 45 million, this song has emitted 1,323 tons of carbon into the atmosphere, requiring just over 55 thousand trees needed to filter the air we breathe.

Another Justin Bieber song lands in sixth place.'Mistletoe' causes almost 1,200 tons of emissions into the atmosphere. The song was released in October 2011 and reached the top 10 in Canada, Norway and Denmark, just missing the top 10 in the US.

The bottom four songs are as follows; 'Do They Know It's Christmas?' by Band Aid (1,151 tons), 'Driving Home For Christmas' by Chris Rea (1,017 tons), 'Fairytale Of New York' by the Pogues (989 tons), and ‘Underneath The Tree’ by Kelly Clarkson (982 tons)— for all four songs combined, almost 173 thousand trees are needed to counteract its CO2 impact.

Despite promises by musicians and streaming platforms to reduce their energy consumption, the climate emergency in the music industry continues.

There is very little in terms of legislation globally around the carbon footprint of streaming technologies. However, this may change as environmental issues continue to rise.

“Although listening to music is generally lower in energy consumption than streaming other media formats, the huge growth in online music consumption outweighs this advantage. It isn’t just the multiple devices we plug in to stream our favourite music that contributes to carbon emissions – the servers we connect to that provide us with these services take up more energy, creating a much bigger carbon footprint.

Here are some ideas for reducing your carbon footprint while still enjoying your favourite music: