If you’re in the market for a new iPhone you’d be forgiven for being a bit confused by all the different options.

To help you pick the perfect iPhone, let’s take a look at three of the best choices if you’re looking to upgrade without breaking the bank. 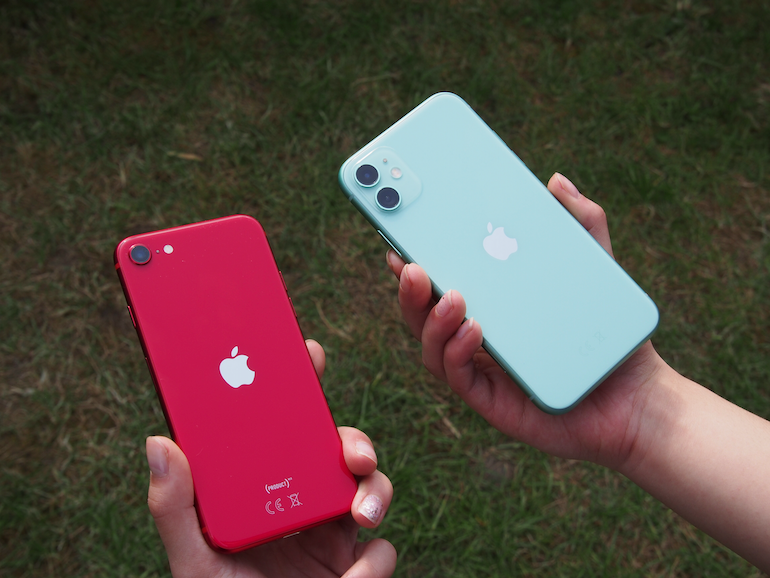 The new iPhone SE is identical in size and shape to the iPhone 8, it is the smallest iPhone you can buy right now, it’s water resistant and has the same A13 processor found on the iPhone 11 and iPhone 11 Pro**.

The iPhone XR is an excellent proposition if you like the shape and large screen of the iPhone 11 but would rather save some money.

The real deal if you’re looking for a larger iPhone at a lower price. Same 6.1-inch screen as the XR but with a better camera.

It includes an optical zoom and fully featured portrait mode - but you'll need to stretch your budget a little further.

Size is a big consideration if choosing between these three models.

The iPhone SE is based on the iPhone 8 design. This size was considered standard when it was first released in 2017 but the trend to bigger screens that started in the Android world has meant iPhones have grown noticeably bigger.

The iPhone SE has a more “classic-iPhone” look. The display has straight angles and sits in the middle of the body leaving sizable gaps at the top and the bottom area, where you’ll find the old style home-button familiar to long-time iPhone users. 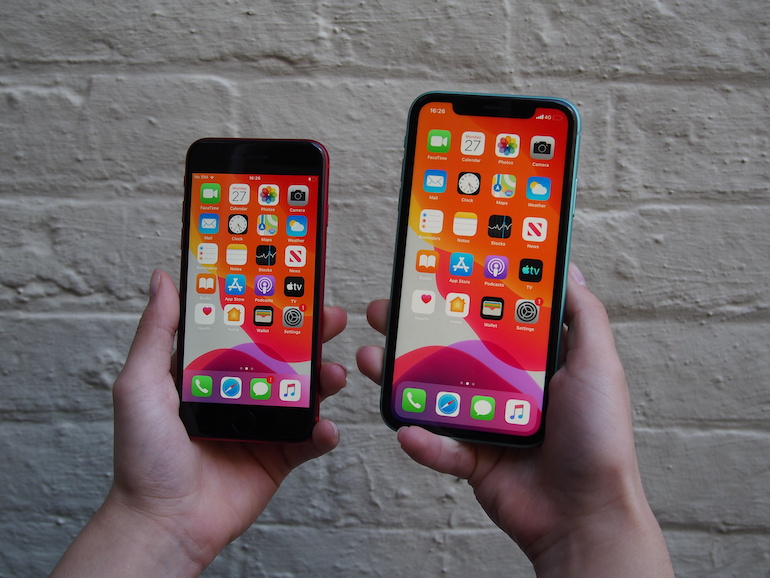 The display of the iPhone SE is a 4.7-inches, considerably smaller than the iPhone 11’s 6.1-inches

The iPhone 11 (and XR) have the new iPhone style with a screen that stretches almost to the edge of the frame and a black notch at the top.

The home button is gone and so is fingerprint recognition. Swipe gestures have replaced the system browsing functionality while face recognition is the only available way to secure your iPhone without having to enter a passcode.

It is of course a bigger device that will sit less comfortably in your pocket, it is considerably wider, taller but also a whole millimetre thicker than the SE. 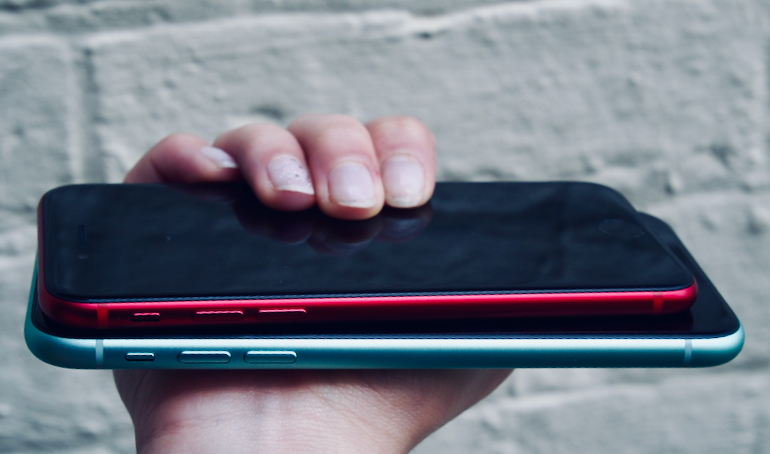 The iPhone XR looks pretty big next to the diminutive iPhone SE but can be still considered “pocketable” when you compare it to the larger iPhone 11 Pro Max.

Despite the rounded corners and big notch at the top, the bigger 6.1-inch still offers that best experience. It allows you to set a bigger display font without too much compromise and if you’re into mobile games you’ve got more screen to play with.

Brightness is almost identical, both screens use LCD technology and have a pixel density of 326ppi, which is identical to the one found on the more expensive iPhone 11.

Both the SE and XR models are water resistant to the IP67 standard that means a depth of 1 meter for up to 30 minutes.

The iPhone 11, on the other hand, pushes its water resistance credentials even further as it conforms to the iP68 standard. It can withstand full immersion for up to two meters for 30 minutes.

If “more screen” is what you’re after you’ll be better served by either the iPhone XR or iPhone 11. The two big models have identical 6.1-inch screens but the latter has an edge thanks to its superior water resistance.

The iPhone 11 is by far the best of the three as a camera phone.

It comes with a dual 12MP standard/ultra-wide main camera with Night Mode, and a selfie camera capable of recording in 4K.

On the XR you’ll find a stripped down version. Same 12-megapixel with Optical Image Stabilisation but the selfie camera is not as sharp.

Portrait lighting is also supported as well as the same sophisticated Night Mode. 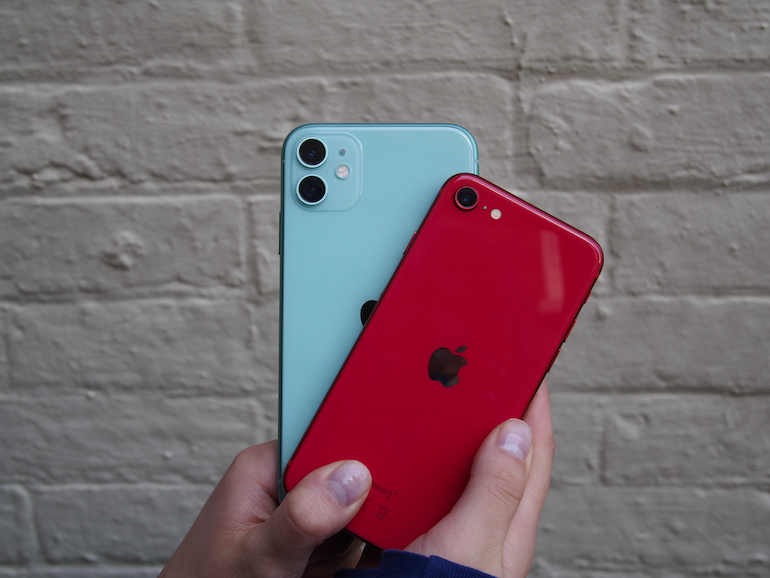 Single camera for the SE and XR. Double for the iPhone 11.

The iPhone SE, on the other hand, uses the same camera system seen on the iPhone 8. Excellent at the time of its release but limited compared to what Apple has achieved with the latest generation.

There is no dedicated Night Mode, the Portrait mode is present but limited to a smaller number of effects and more importantly, the front camera does not support face recognition, a big selling point of the latest generation of the iPhones.

It’s not all bad news on the camera front for the SE. Apple has managed to improve the camera performance thanks to the same A13 processor used on the more expensive devices.

If you’re upgrading from a first generation SE or iPhone 8, you will notice the addition of a Smart-HDR, Portrait Lighting options on the main camera and video stabilisation.

The SE falls behind in versatility but the software improvements make it an excellent all-rounder especially considering the low price.

iPhone 11 wins hands down if the camera is a priority.

The processor is the only area where the iPhone SE betters the more expensive XR.

The inclusion of the A13 processor, the same unit used on the iPhone 11 and iPhone 11 Pro signals that Apple is serious about maintaining support for the SE and its capacity to handle future system updates.

This difference is also a red flag when it comes to future support. Given these specs, the iPhone XR is the one that will be likely to be discontinued first, with the iPhone 11 filling the gap left by it.

Storage space is identical for both models, the cheapest variant comes with 64GB, and the option to upgrade to 128GB (or up to 256GB in the case of SE).

All three models support wireless charging via a Qi charger. They are also compatible with quick charging, a key feature if you’re upgrading from an old generation iPhone. But to take advantage of the “50% charge in 30 minutes” promised by Apple you’ll need to buy a compatible 18W adapter with USB-C to lightning cable.

The iPhone XR has a 2,942mAh battery which offers a considerably better performance compared to the tiny 1,821mAh included in the SE.

The iPhone 11 on the other hand uses a 3,110mAh battery that performs slightly better than the one found on the XR.

Both the SE and the iPhone 11 win over the XR when it comes to sheer performance and their ability to withstand future system upgrades.

Winner: It's a tie between the iPhone SE and the iPhone 11 when it comes to sheer performance.

The iPhone 11 has also the best battery life of the three.

The iPhone SE is a classic iPhone 8 with the latest processor and an improved camera that will please long-time iPhone customers.

The iPhone XR would seem, at first, a good way to buy a latest generation phone at a lower price but, the compromises on the processor and camera are enough to make stretching your budget and buy an iPhone 11 look totally worth it.

For an extra £100 when bought outright, the iPhone 11 would give you a fully featured camera complete with wide-angle lens, a more capable selfie.

Above all, it comes with a more powerful processor and more memory, (4GB instead of the 3GB of the XR) a factor that will ensure greater longevity and the ability to handle future system updates.

Anyone upgrading from an iPhone 8 or older that is happy to stick to the familiar compact size, the iPhone SE makes it a natural upgrade at a great price.

If you’re attracted to the bigger screen of the latest generation of iPhones, you’re better off stretching to the iPhone 11.

Pick out the perfect iPhone 11 deal

Check out some great deals for the iPhone SE

Testing out the new Huawei flagship.

Apple surprise us with the new iPhone SE.

We compare two of the best smartphones on the market.