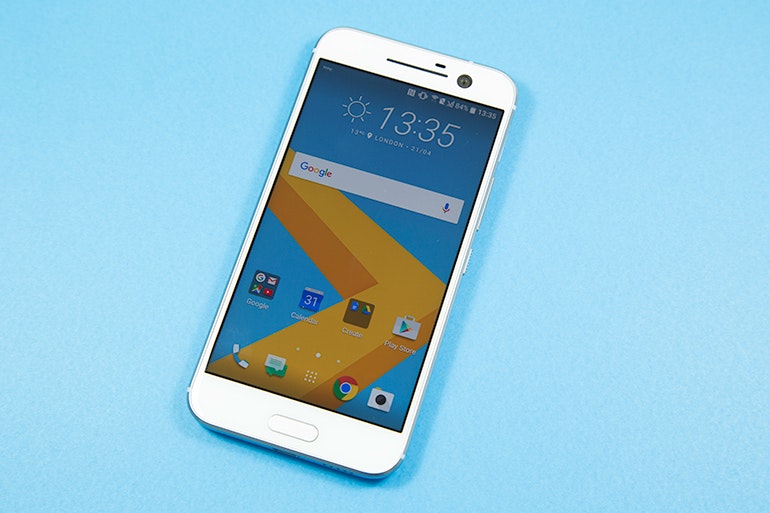 HTC has made some good phones in recent years, but bar a couple of innovations (BoomSound speakers and slightly disappointing 'UltraPixel' camera tech), they haven't really stood out from the competition. So a lot is riding on the HTC 10.

Break it out of the box, and it'll strike you as a tall, fairly thick handset.

Tall, because of the thick bezels above and beyond the screen that house the speakers (more on those later).

Fat, because it is: at 9mm thick, it's almost 2mm thicker than the iPhone 6S.

That said, while the HTC 10 is discernably a bit heftier than some of its rivals when you're holding it, you surely won't notice the extra bulk when it's in your pocket. 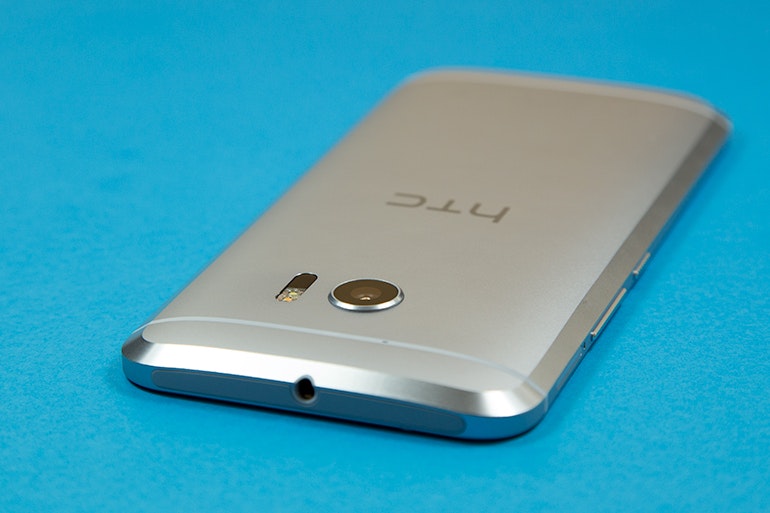 While previous HTC phones have been guilty of emulating the iPhone's design rather too closely (not least the One A9), the HTC 10 has a look all of its own.

Large bezels sit above and below the screen and there's a tablet-shaped home button that's touch-sensitive rather than a standard click-to-activate button. This also doubles as a fingerprint reader.

Best of all, the angled edges at the rear make the HTC 10 seem a little slimmer than it actually is, and combine with the sober colours and metal finish give it an attractive, 'industrial' look. Overall, we like the design a lot. 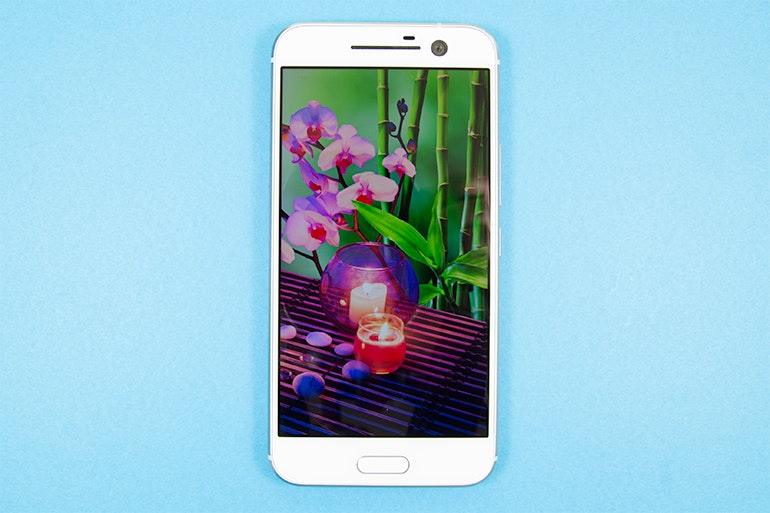 This is the first HTC handset with a QHD screen. That means it has a resolution of 2,560x1,440 pixels, which makes it one of the sharpest displays around.

Combine that with its screen size of 5.2 inches, and you've got a pixel density of 564ppi.

In plain English, that means you get a very crisp image indeed. By way of comparison, the iPhone 6S and SE only have a pixel density of 326ppi.

Colours are bright without being over-saturated, plus you can customise its colour balance to the nth degree.

The only downside is it's not an always-on display, so you have to wake the screen to see notifications and the time.

Now that Android rivals Samsung and LG are fitting their phones with always-on screens, the HTC 10 seems a little behind the times. 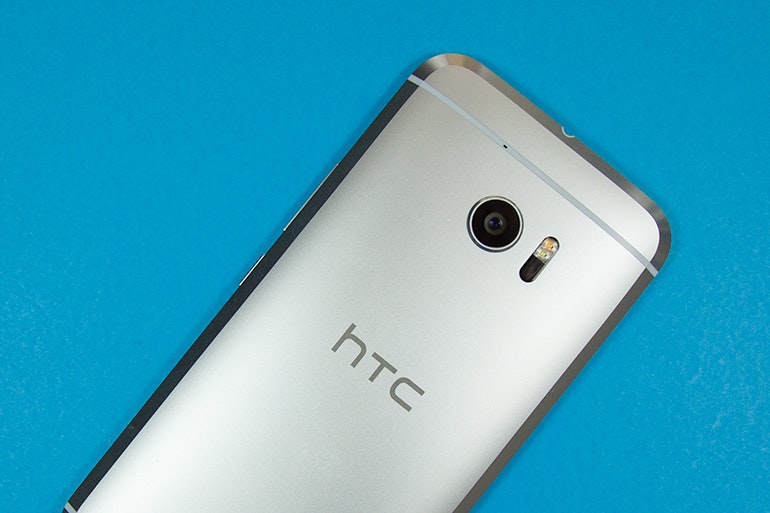 Let's be honest, the camera on the One M9 wasn't the best in the world.

This time around, HTC has stuck with its UltraPixel tech (this involves using bigger pixels, to let in more light and improve low-light performance).

But the big change is that it has dropped the number of megapixels from 20 on the M9 to 12 on the HTC 10. It might sound worse, but numbers rarely tell the whole story.

A photo of sunflowers really showed off their yellow hue, while even on a drizzly day our snaps looked clear and free of graininess.

Portraits benefited from warm skin tones too, which always goes down well with the person in the snap. And it's quick to focus, thanks to laser-focussing technology.

HTC has equipped the front and rear cameras with optical image stabilisation (OIS), meaning you can look forward to blur-free selfies. Even shaking our head didn't cause our self-portraits to smear, though we did look a bit silly.

That's a unique selling point, considering the iPhone 6S doesn't even have OIS on the main camera.

In conclusion, the HTC 10 is a huge step on camera-wise from the One M9.

But although it's hugely praised by camera-rating specialists DxO, for us it's still not quite as good as the best around, namely the iPhone 6S and Samsung Galaxy S7. 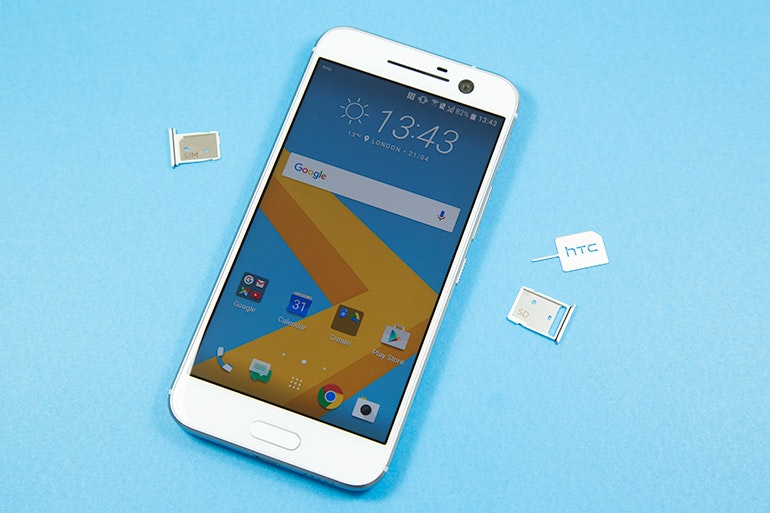 If power is what you want from a smartphone, the HTC 10 might just be the one for you.

It runs on a Qualcomm Snapdragon 820 processor, which is one of the brawniest on the market.

That's partnered with a huge 4GB of RAM to give impressively speedy performance, whether you're switching between apps, loading the latest games or just whizzing around menus.

The fingerprint sensor is also very responsive, even quicker than Touch ID on the iPhone 6S. No sooner have you touched the sensor than the screen has woken up and you're ready to get going.

HTC has really scaled back its Sense interface too – this is the customised software it lays on top of phones' Android operating system.

Usually the presence of Sense means you're saddled with a lot of duplicate apps. So, for instance, you'd typically get Google Hangouts and the manufacturer's own messaging app as well. But that's all changed with the HTC 10.

Instead, it offers a selection of Google apps, and some of HTC's own that complement rather than compete with Google's. The upshot is that there's only one camera app instead of two, for example. And with some themes, you can even hide apps you don't use so your phone's layout is cleaner and less cluttered.

Sound has traditionally been HTC's strong point, thanks to its BoomSound speakers. The 10 is no different.

This handset really is loud. So much so that the sound of whatever you're watching on YouTube or playing on the MP3 player will easily fill a room.

Unlike some phones, the speakers are well-positioned too, so they're not muffled by your hands as you hold the handset.

Finally, battery life. As with most phones, the HTC 10 will last more than a day with moderate usage, but if you're busy streaming, taking photos, playing games and using GPS-enabled apps, and your battery bar will soon deplete.

Thankfully, Qualcomm's Quick Charge 3.0 tech is there to help and can restore your battery to 50 per cent from just a 30-minute charge. 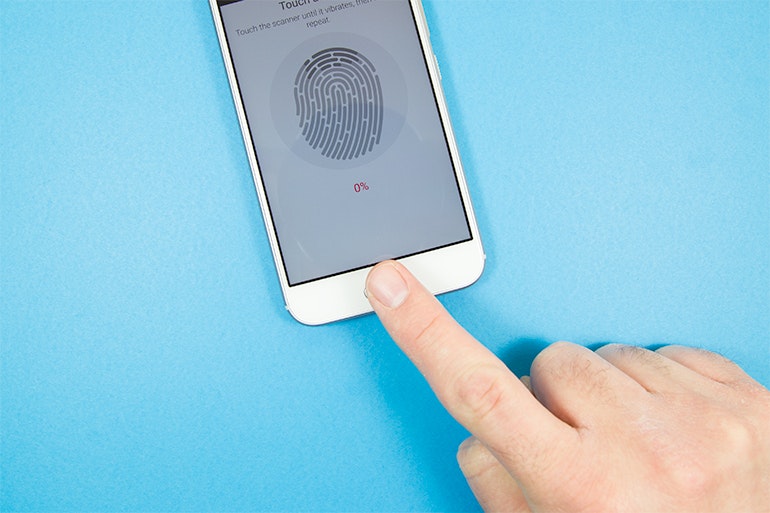 SIM free, the 32GB HTC 10 will set you back £570. That's cheaper than the Samsung Galaxy S7, though pricier than the LG G5 and the (admittedly lower capacity) 16GB iPhone 6S.

Pick it up on a monthly contract, though, and expect to pay a shade over £30 per month, with no upfront charge.

For that you're getting a premium handset with lots of things to recommend it. It's not the best around and we'd have liked it be a little bit cheaper, but it's certainly the best HTC phone for a long time.

The 10 sounds great, takes decent snaps and is fuss-free and easy to use.

A perfect 10? Not quite, as the competition is so fierce right now. But it's a definite improvement on what came before it.