Tech journalists knew for months that the iPhone 7 would be virtually identical to both the iPhone 6 and iPhone 6s.

But it’s only when you open the box and see the iPhone 7 for the first time that the reality sinks in.

Aside from the removal of the antenna bands across the back and the lack of a headphone slot, the iPhone 7 looks exactly the same as 2014’s and 2015’s models.

It’s hard not to feel disappointed, even in the certain knowledge that Apple will be massively overhauling the iPhone in 2017.

The 4.7–inch screen is brighter than the iPhone 6s and the jet back finish is sleeker and less slippery too.

However, while omitting the headphone slot gives the bottom of the phone a cleaner finish, it really looks as if it’s lacking something.

Looking for our iPhone 7 Plus review? Here's our verdict on the larger edition of the iPhone 7.

Our review handset was a black iPhone 7. This colour looks much sleeker than the silver, gold and rose gold versions and, despite claims to the contrary, is not as much of a fingerprint magnet as we had first feared.

You can’t argue that the iPhone 7 isn't sleek. But compared with Samsung’s Galaxy Note 7, it feels a bit dated.

The biggest change is undoubtedly the removal of the headphone slot. The 3.5mm port, which has been a fixture of consumer electronics since the mid-'60s, gives way to a new speaker.

Yes, it looks a lot cleaner and less cluttered and the sound from the speaker renders secondary Bluetooth speakers pointless.

But those positives are tempered somewhat when you plug in the unsightly adaptor, which comes bundled with the phone.

If you use standard headphones this will either need to stay plugged into the phone or on the end of your ear buds at all times.

Failing that, you can use the specially designed EarPods, which fit into the Lightning charging port and also come free with the phone.

These are perfectly serviceable, but hardly any use when you want to charge your phone and listen to music at the same time.

Apple will counter that you can use its expensive new wireless AirPods, which we did not test.

However, it’s hard not to see this move as somewhat arrogant on the Californian company’s part.

Apple executive Phil Schiller claims it's courageous gambit, but for us this is a step which shows the company is in danger of becoming out of sync with consumers in general.

The other major change centres on the home button. This is no longer a physical key.

Instead it is a touch-sensitive area that uses what's called haptic feedback technology to vibrate gently when you touch down on it and create the illusion that you're pressing a real, physical button. It also vibrates in different ways to notify you of new messages or a missed call.

While the button still functions as before, there are some minor tweaks. Not least that you have to use bare skin for it to work. If you're wearing gloves, it simply won't register your press and you won't be able to wake up your phone with the home button.

That's mitigated somewhat by the new ‘rise to wake’ feature. This means the display wakes up every time you lift the phone, so you can check the time and see your notifications.

According to Apple, the iPhone 7 is certified IP67 for water resistance. This means it can be submerged in up to a metre of water for up to half an hour and come out right as rain.

It's a very welcome addition. Especially if you're a bit clumsy.

Not too long ago, the iPhone's Retina Display was the best-in-class smartphone screen. Much has changed since then.

This time around Apple has brightened the 1334 x 720 screen by 25%. But it’s still not as crisp and clear as those found on Samsung’s Galaxy Note 7 and Galaxy S7.

This is an issue, though, only for those who obsess about marginal differences. Overall, the display offers rich levels of detail, especially when watching HD clips on YouTube and Netflix.

At 4.7–inches, it remains one of the smaller screens out there. However, it’s still just about usable in one hand, something which can’t be said for Samsung’s Galaxy Note 7 or Apple’s own iPhone 7 Plus. 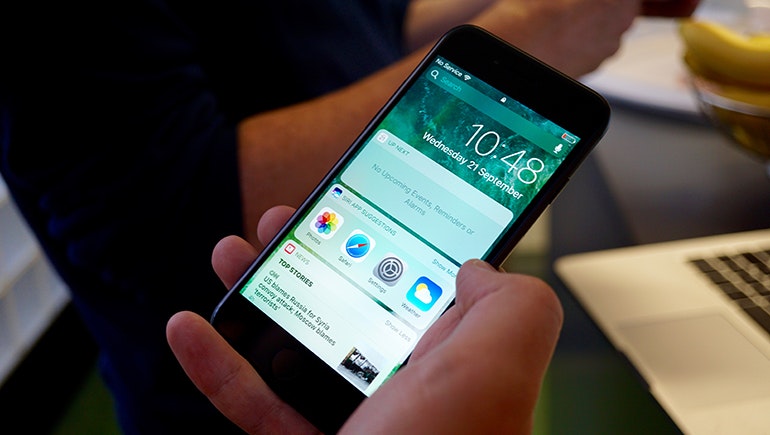 The updated lockscreen in iOS 10 is accessible via a quick swipe to the right.

Clearly taking design cues from Google Android, it’s a clever and much better solution than previous versions and means you don’t need to dive into the phone to read messages and get the latest headlines.

For us, this is one of the iPhone 7’s best new features. Although it's worth noting that it's also available to iPhone 6 and 6s owners who download iOS 10.

The quality of the camera is where the iPhone 7 really stands out against its predecessors.

Apple may have stuck with the same 12-megapixel camera as the iPhone 6s, but don’t let that fool you. The camera on the iPhone 7 is a vast improvement over older models.

The lens is larger and has a wider aperture, which lets in 50% more light.

The results are much less grainy and far sharper compared with photos taken on an iPhone 6 and iPhone 6s.

While it might not have the double lens pairing of the iPhone 7 Plus, the iPhone 7’s camera is still every bit as good as that on the Galaxy Note 7.

Digital zoom, so often a letdown on camera phones, serves up sharp detail without any nasty ‘noise’. And automatic adjustments to white balance and focus mean it's really, really hard to take a blurry snap.

The fact that the lens still protrudes from the body of the phone is not ideal, but appears to be an increasingly common design feature from all smartphone-makers. Even so, we expect Apple to fix this in the next-generation iPhone.

The front–facing camera has now been boosted to seven megapixels. And coupled with the iPhone 7's ability to use the screen as a flash, it delivers some of the best pictures we’ve ever seen from a secondary camera.

If anything, it’s a little too detailed - so make sure you’re looking sharp before taking any selfies. 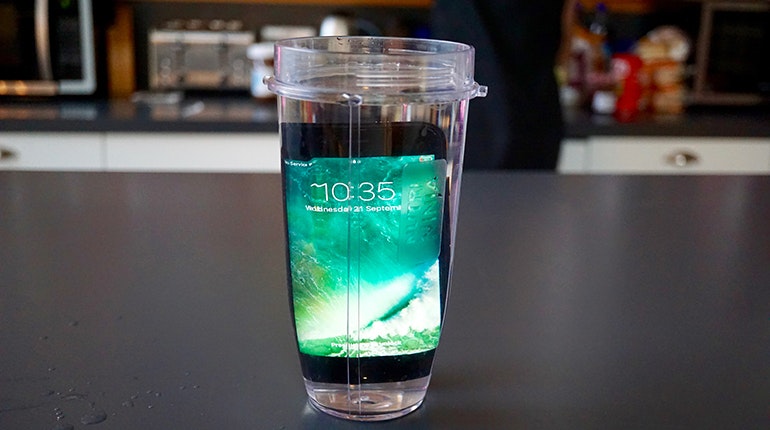 Apple’s new A10 Fusion processor is the unsung hero of the iPhone 7. It ensures the camera works quickly and is capable of A-grade shots, while making sure that everything from Safari to Messages open up instantly.

You can feel the difference immediately when you switch from an older iPhone.

Apple says that the processor will aid battery longevity. We found a standard day’s use of email, web browsing, streaming tunes on Spotify and watching the odd YouTube clip gave us 24 hours of life.

That's not bad. But for us at least, there’s still the lingering feeling that Apple would be better served by loading the iPhone up with a larger battery.

iOS 10 is undoubtedly the best software Apple has produced and is at its best on the iPhone 7.

The updated version of the Siri voice commands app is fun to use and now works with apps that aren't made by Apple. But it's still hard to consider voice commands much more than a novelty.

Conversely the updated lock screen, with notifications and other key information, is extremely handy and a much–needed improvement.

The problem is that while that price is commensurate with other similar smartphones, it’s still a lot of money.

That said, you're getting a very good smartphone. Whether it's worth it depends on which phone you own now and how much of an upgrade the iPhone 7 represents. 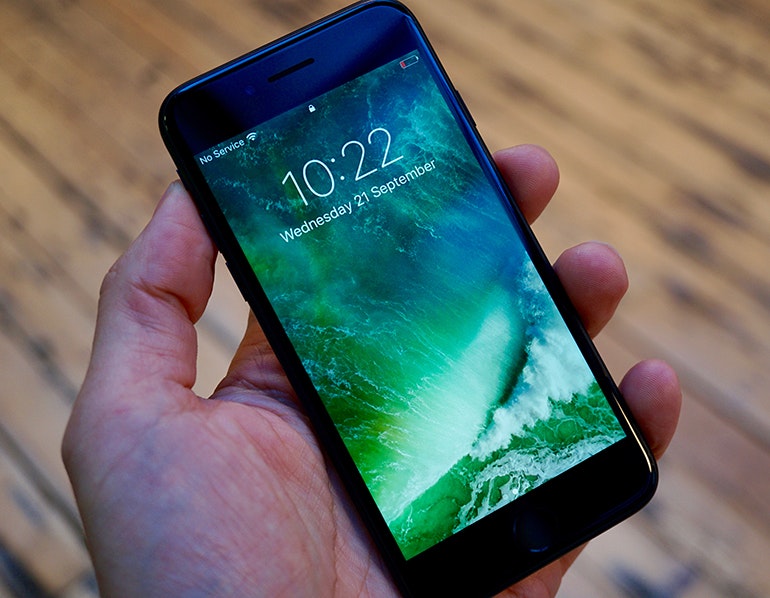 It’s hard to shake the slight twinge of disappointment that the iPhone's design has barely changed for two years, as well the annoyance caused by having to carry around an adaptor if you want to use your existing headphones.

But there’s no denying the iPhone 7 is laden with cutting-edge tech. iOS 10 and the A10 processor combine brilliantly and the camera is undoubtedly one of the best we’ve tried on a smartphone.

See what's on offer at our dedicated iPhone 7 deals page