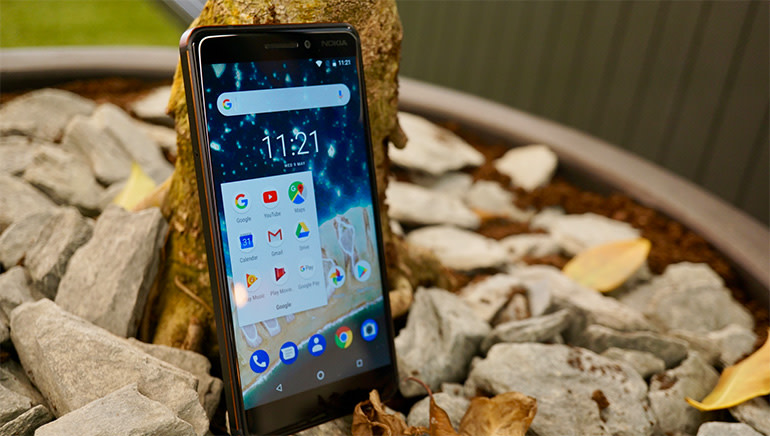 The reemergence of the Nokia brand has been a good news story for smartphone fans over the past 18 months.

Now owned by HMD, its range of entry-level and mid-tier smartphones represent decent value even if they don’t inspire huge amounts of excitement.

Pull it out of the box and the first thing you’re struck by is its bronze trim.

This manages to look classy rather than tacky and makes the Nokia 6 look less utilitarian than the black boxes we’ve become used to in recent years.

What’s also notable is the sheer heft and size of the thing. At 172g, the Nokia 6 (2018) isn’t particurLaly hefty (just 5g heavier than the new Moto G6), but the aluminium frame and the sheer width make it somewhat cumbersome.

This is due to the inclusion of a 16:9 screen, rather than the narrower 18:9 efforts favoured by most mobile-makers. The immediate sense is that it feels a mite outdated.

This feeling isn’t helped by poor button positioning, with the power and volume keys so high up the right-hand side of the device that they are hard to reach without stretching.

Likewise, the rear fingerprint scanner is awkwardly placed and hard to get used to.

Pick up the Nokia 6 SIM free from Carphone Warehouse.

Mobile-makers have long been making the switch to narrower, 18:9 displays, the better to showcase videos on streaming platforms, such as Netflix and Now TV, and offer a more immersive gaming experience.

And while the bezels at the top and bottom of the phone have been trimmed down compared with last year’s model, it feels dated and makes the handset cumbersome.

The screen itself, at 5.5–inches and with 1080p HD, is actually pretty good for its class.

We caught a few episodes of Love on Netflix and watched a BBC documentary about space tourism and were struck by the deep blacks and the strong colour reproduction.

The display also works well when the phone is pulled out in bright light, while the night view mode also helped after dark, cutting harmful blue light.

The sound cranked out by the speaker at the bottom of the Nokia 6 (2018) is certainly loud and brash.

But its positioning means that your hand often covers it when watching videos and playing games. It’s best to use headphones via the 3.5mm jack instead.

This means that it comes with the most basic version of Android, without any bloatware or custom skin, with the promise that it will receive updates faster than other non–Google branded phones.

The version here is Android 8.0, rather than 8.1, but that’s a small quibble and one we’re not overly fussed by.

The experience is much like using a budget version of Google’s own Pixel phones.

The navigation is breezy and intuitive and will be second nature to all Android users.

It’s also great to see that HMD has decided to offer Google Assistant as part of the Nokia 6 (2018) package.

The virtual assistant from the Big G is head and shoulders above Apple’s Siri and can be activated by simply saying ‘OK Google’.

The device we tested came with 32GB of storage and 3GB of RAM.

The former can be expanded by microSD, meaning there’s ample room for locally stashed videos and music and all but the most space hungry games on Google Play. 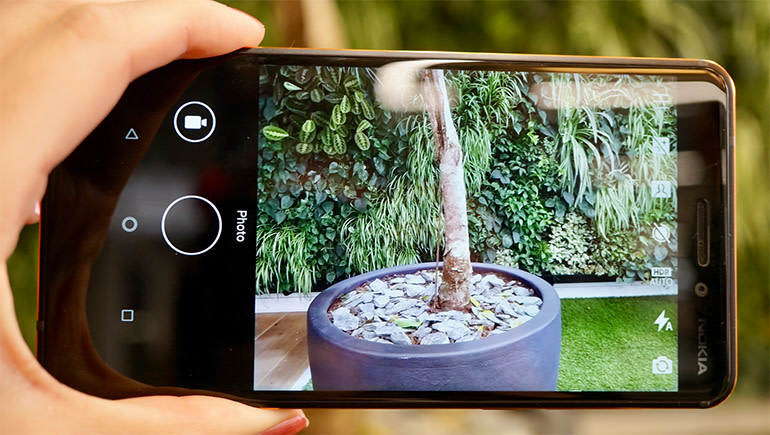 The good news is that where the entry-level Nokia 2 failed, the Nokia 6 steps up.

Its main 16-megapixel camera is never going to beat the Samsung Galaxy S9 or Apple iPhone X, but it performs admirably when the conditions are right.

It has Zeiss branding, which may sound enticing, but that’s merely (ahem) optics.

Sadly, it’s not all good news. Try shooting in a dark room or outside once the sun goes in and the Nokia 6 (2018) isn't all it might be.

Pictures appear grainy and noisy, with foreground details often lacking. The fact that the Moto G6 and other rivals have dual lens setups also help make the Nokia 6 seem a bit superannuated.

That said, 4K shooting is a welcome addition and the front–facing eight megapixel camera does the job when it comes to taking selfies.

For a midrange phone, the Nokia 6 (2018) performs admirably. That's in no small part thanks to the Qualcomm Snapdragon 630 which keeps things ticking.

This chipset is more efficient than the one found in last year’s model and means that screen transitions are snappy and opening apps doesn’t require a painful wait.

It’s also the reason the relatively standard 3,000mAh battery can last more than a day on a single charge.

We had 20% battery left after a day of watching videos on Netflix, making calls and wasting time on Twitter. A good return which could easily be upped with more judicious use during the day.

The Nokia 6 (2018) also powers up a lot faster than its predecessor thanks to the inclusion of USB—C and a variable voltage power pack, You can go from zero to 100% in around 90 minutes.

Although the Nokia 6 doesn’t have an IP rating, and therefore isn’t water or dust proof like so many higher end phones, its aluminium unibody design inspires confidence.

It feels rock solid in the hand. But it still pays to be more cautious around liquid, so no leaving it on the table down the pub.

It also comes with Corning’s Gorilla Glass 3, like the cheaper Nokia 2. This isn’t Corning’s best–in–class offering, but it does give reassurance to those who are forever letting their phone drop onto solid surfaces.

Only the unluckiest users will see their phone smash if they drop it.

At £229 SIM–free, it’s hard to complain about the Nokia 6 (2018). Its features are commensurate with its mid–range status, even if the new Moto G6 range has rewritten the rulebook on what an affordable phone can offer.

Its biggest draw is its Android One status. This might not seem like much, but in an age when budget phones from the likes of Samsung never see a major Android update, potential users could see this mid–tier effort get a fully updated OS just weeks after it launches.

The battery life and processor also help make the Nokia 6 (2018) stand out, alongside its natty bronze finish. Meanwhile the camera performs to a strong if not spectacular level.

That’s not to say there aren’t issues. The 16:9 aspect ratio is clunky, even if the 1080p screen looks the part, and it makes the phone feel cumbersome in the hand.

Throw in poor button positioning and it's fair to say that the design could've been better.

Even so, if you love Nokia it’s likely that you’ll love this phone.

But there are similarly priced devices with a lot more to offer for savvy consumers, making it hard to outright recommend snapping up the Nokia 6 (2018).

Pick up the Nokia 6 SIM-free from Carphone Warehouse.