The OnePlus 8 and OnePlus 8 Pro are the latest flagship devices from the popular Chinese brand, and they offer a number of long-requested features that make these devices a must-have upgrade for OnePlus fans.

The Pro model, for example, boasts IP68 certification and wireless charging, along with a market-leading 120Hz display, a quad-camera setup and 5G connectivity. 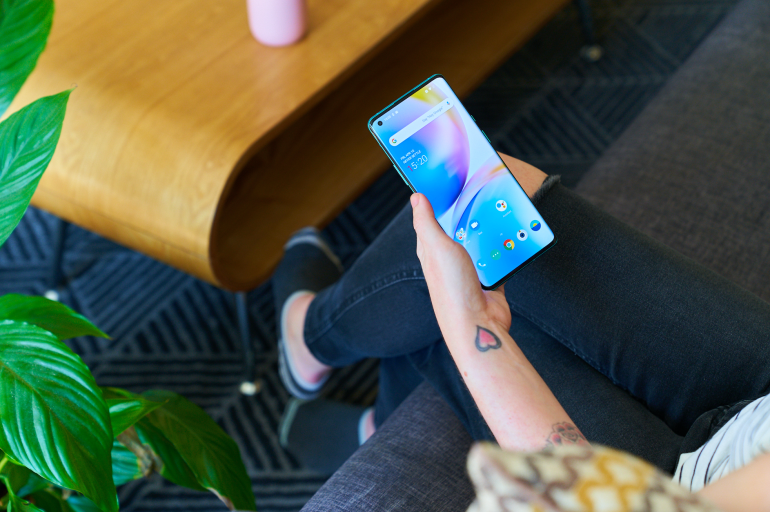 OnePlus has always made stylish looking handsets and the OnePlus 8 and 8 Pro are no exception. Both devices have curved glass on the back and front and we love the new ‘Glacial Green’ colourway, which catches the light and exudes high-end. Both handsets will also launch in a glossy ‘Onyx Black’ variant.

Thanks to its 6.7-inch screen, the OnePlus 8 Pro is quite a large device at 165 x 74 x 8.5mm. It’s tall dimensions mean some may struggle to operate the device with one hand, while its chunky frame means it’s unlikely to squeeze into skinny pockets. The OnePlus 8, which features a smaller 6.5-inch screen, is more pocket-friendly at 160 x 72 x 8mm, and much more comfortable to use with one hand. The smaller model is also noticeably lighter at 180g compared to 199g.

Around the front of both the OnePlus 8 and 8 Pro, the pop-up mechanism that housed the front-facing camera on the OnePlus 7T is gone and replaced by a tiny punch-hole cutout. This measures in at just 4mm and it’s barely visible when you’re immersed in content.

On the back, OnePlus has got rid of the circular camera array that debuted on the OnePlus 7T. Instead, both the OnePlus 8 and OnePlus 8 Pro - which feature triple and quad-camera setups, respectively - sport a more aesthetically-pleasing vertical array, though this still protrudes from the back of the phones somewhat.

The OnePlus 8 Pro is also the company’s first device that’s IP68 rated, enabled by the lack of pop-up selfie camera, so it can withstand dust, dirt and sand, and is resistant to submersion in water for up to thirty minutes. Unfortunately, the standard OnePlus 8 doesn’t offer this, but OnePlus tells us it still features a decent level of water resistance.

Both the OnePlus 8 and 8 Pro feature a bottom-mounted USB-C port and dual speakers, a volume rocker on the left-hand side, with alert slider and standby buttons along their right edge. 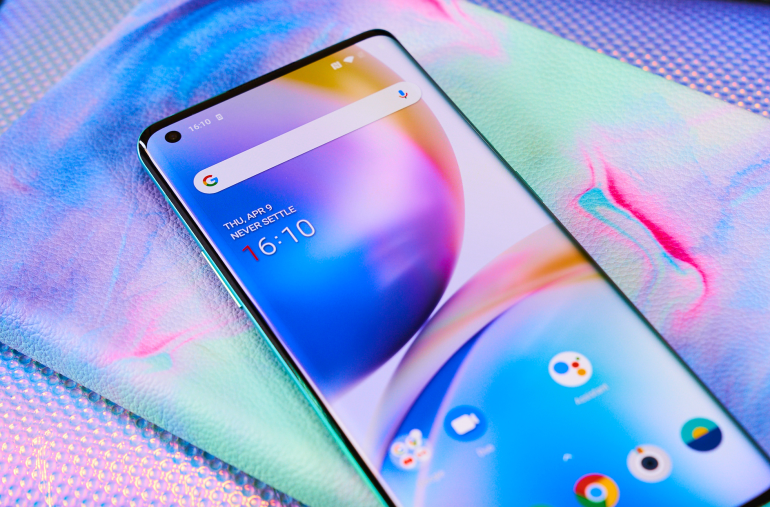 The higher-end 8 Pro is the first OnePlus smartphone to feature a 120Hz screen, following in the footsteps of the Samsung Galaxy S20 and Oppo Find X2. This means the handset’s 6.7in QHD+ AMOLED panel will refresh 120 times a second, rather than 60 or 90 times a second. This makes scrolling through Instagram and swiping across home screens incredibly smooth.

What’s more, unlike the Galaxy S20, this 120Hz refresh rate will work when the screen resolution is set at its highest QHD+ level.

The OnePlus 8 Pro’s screen is impressive beyond its 120Hz refresh rate. The AMOLED panel makes for deep blacks and punchy colours, its HDR10+ support means Netflix content looks smooth and dynamic and its touchscreen sampling rate of 240Hz makes it among the most responsive we’ve used.

Another new display feature on offer is Motion Graphics Smoothing, which automatically upscales content you’re watching on Amazon, Netflix and YouTube to 120Hz. This is something that will no doubt be welcomed by some and promptly switched off by others who dislike the way the feature can break the immersion of cinema.

This feature isn’t available on the OnePlus 8, which sports lesser display credentials than its Pro sibling with its 6.5in FHD 90Hz panel. Though not as immersive and rich as the QHD+ panel, the OnePlus 8’s screen is still perfectly bright and crisp and ideal for those after a smaller-sized handset.

Both phones, like last year’s 7T and 7T Pro, have a screen embedded fingerprint sensor, which is simple to set up and unlock the handsets rapidly. We have found it can struggle if your fingers are wet, so we also set up Face Unlock on the devices. 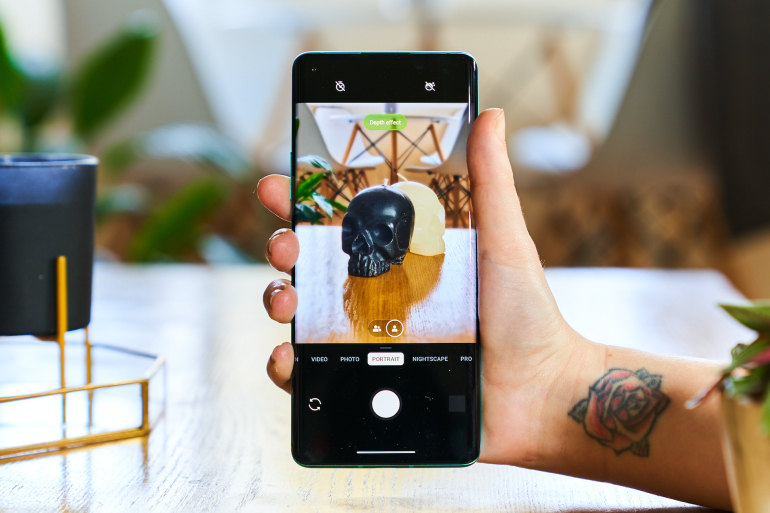 The Pro model is a phone of “firsts”, as it's also the first OnePlus device to feature a quad-camera array. This comprises a 48MP (Sony IMX689) main camera, an 8MP telephoto lens, 48MP (Sony IMX586) ultra-wide-angle lens and a 5MP colour filter camera.

This rear-facing setup is quite an upgrade over the 7T Pro’s triple-camera offering, particularly when it comes to capturing wide-angle shots thanks to the higher-resolution sensor. Images taken outdoors and in natural light were vibrant, crisp and full of natural colour, and the built-in Nightscape mode produces impressively detailed shots when daylight is lacking. The telephoto lens is decent too - though we found images started to become noisy and lose detail beyond 3x zoom.

We weren’t so impressed with the all-new colour filter lens, however. This 5MP sensor has been implemented for the Instagram and Snapchat generation who want their “photos to stand out from the crowd.” Perhaps we’re not of the right audience, but we found the fourth camera somewhat unnecessary, producing images that look like they’ve been shot through night vision goggles.

The OnePlus 8 features less of an upgrade in the camera department, sporting a triple setup comprising a 48MP main sensor, a 16MP wide-angle lens and a 2MP macro camera - an all-new addition that lets you take extremely close up shots.

Both devices feature 16MP front-facing camera, which proved perfectly adequate for video calls and for touching up our makeup. 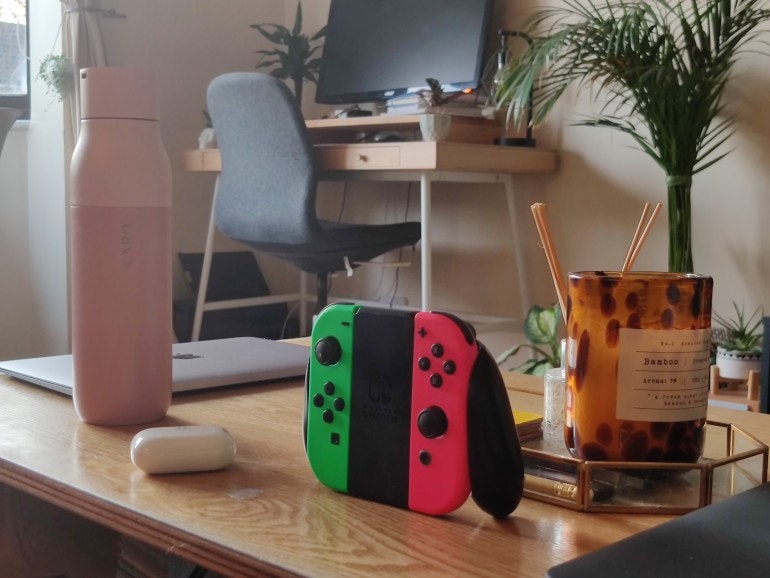 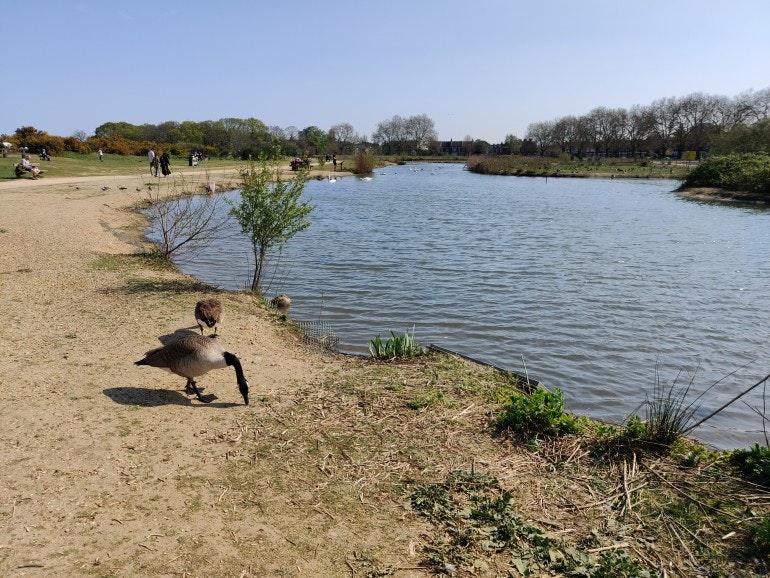 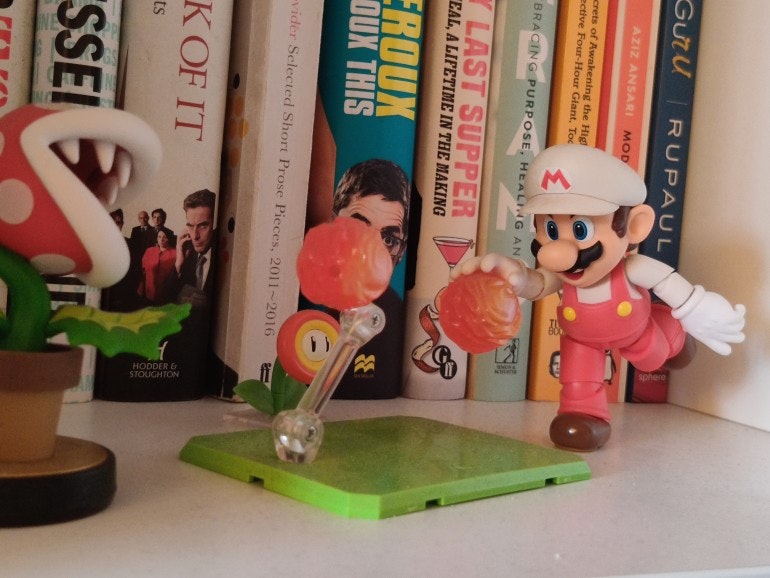 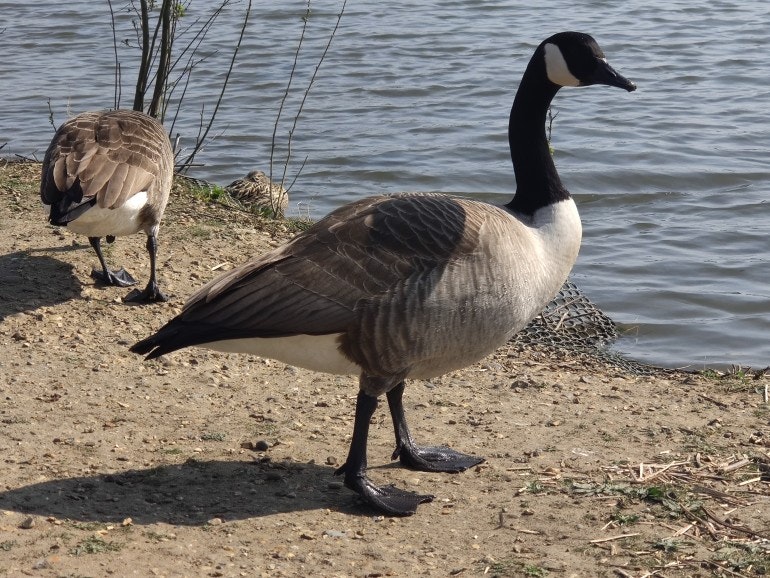 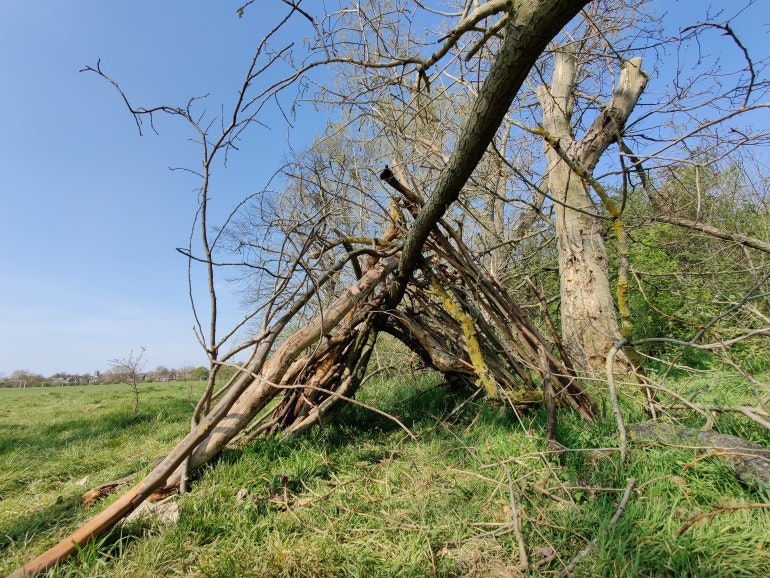 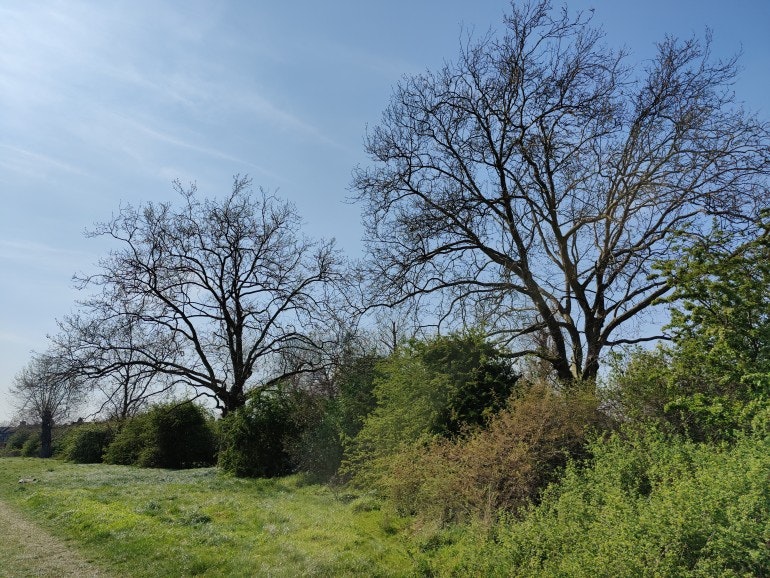 Though they differ in the display department, the OnePlus 8 and 8 Pro are fairly evenly matched when it comes to performance. Both handsets pack Qualcomm’s latest-and-greatest Snapdragon 865 processor paired with either 8GB RAM and 12GB storage or 12GB RAM and 256GB storage.

Both devices are also the first from OnePlus to feature 5G connectivity. So people who live in 5G supported areas can enjoy super-fast download speeds. With a 5G SIM in the OnePlus 8 Pro, we achieved 5G download speeds of up to 100Mbps.

In terms of battery life, the OnePlus 8 Pro packs a 4,510mAh battery, which the firm claims “will last” even with both the 120Hz screen and 5G enabled - something other manufacturers haven’t been able to achieve. We found the handset lasted most of the day - even when we had the screen cranked up to full brightness and set to 120Hz; after watching a 25-minute workout video over WiFi, the battery sank from 94% to 91%. However, by around 9 pm after a heavy day of usage, we found ourselves reaching for a charger. 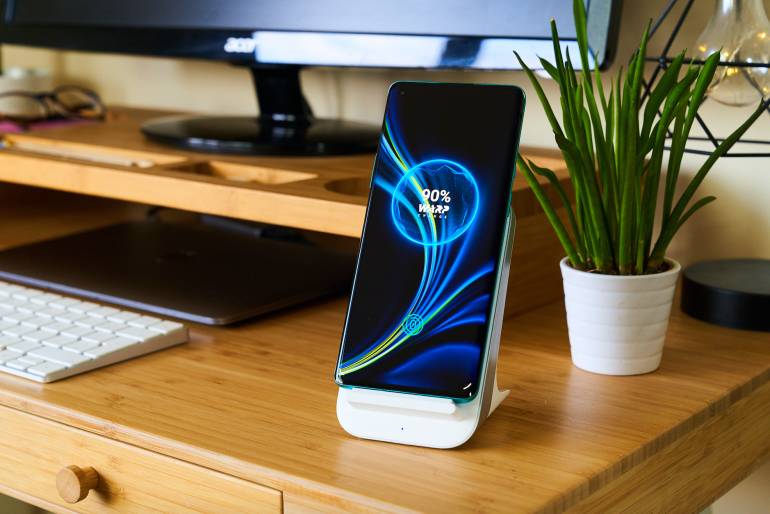 Thankfully, the device charges quickly. The OnePlus 8 Pro comes with support for Warp Charge 30T wired charging and, for the first time, Warp Charge 30 wireless charging which will juice the device from 1% to 50% in around half an hour. Though a great addition, and a long-requested feature among OnePlus fans, the handset doesn’t ship with a bundled wireless charger so take full advantage you’ll have to buy one separately.

There’s another new battery feature on offer in the form of Smart Charging Optimisation. Enabled when using the bundled wired charger, this software feature will ensure your phone isn’t set fully-juiced for hours on end, which can cause the battery to degrade over time. Instead, if you plug your phone in at 10 pm but won’t use it again until 6 am, the charge won’t kick in until it needs to.

The OnePlus 8 features a smaller 4,300mAh battery, though we found it lasted around as long as the Pro model due to its lesser 90Hz screen; it’ll get most people through a day, though heavy users will likely need to re-juice in the evening.

On the software front, both the OnePlus 8 and 8 Pro ship with Android 10 topped with OnePlus’ Oxygen 10.5 OS. As its name suggests, this isn’t a major leap over Oxygen 10 OS, and it instead adds a handful of nice-to-have features. These include Google One, support for Amazon’s Alexa voice assistant and, naturally, a custom dark mode. 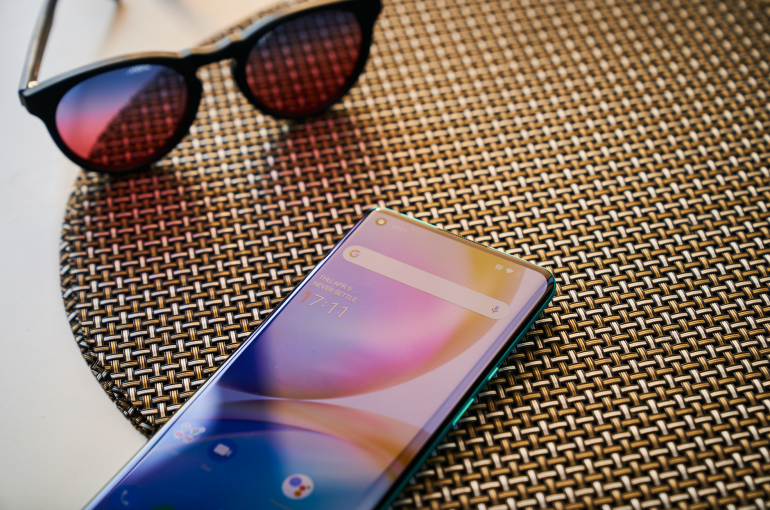 Although the OnePlus 8 Pro is the company’s most expensive smartphone yet, with a starting price of £799 SIM-free, it’s sure to be a must-have upgrade for devoted OnePlus fans. Not only is it the company’s first device to join the elite club of handsets to sport a 120Hz screen, but it’s also the first to adopt a number of fan-requested features, including IP68 certification, support for wireless charging and 5G connectivity.

Though it’s not as impressive spec-wise, with its lack of IP68 certifications and wireless charging, the OnePlus 8 is still a worthwhile upgrade for those after a less-flashy, less-expensive handset. The device, which will be available to buy from £599 SIM-free, boasts the same high-end design as the Pro model, along with the same level of performance.