The OnePlus 8T has arrived right on schedule. Each year, OnePlus releases a major upgrade in the spring followed by the launch of a “T”-suffixed model in the autumn. However, things are a little bit different this time around as there’s no OnePlus 8T Pro. Instead, OnePlus tells us, the OnePlus 8T essentially replaces the OnePlus 8 as the company’s new mid-range flagship and will sit alongside the flagship OnePlus 8 Pro and budget OnePlus Nord.

While a replacement for a six-month-old phone might seem somewhat unnecessary, the OnePlus 8T introduces some neat upgrades. There’s now a 120Hz display, a quad-camera setup, and lightning-fast charging technology that sees the phone juice from zero to full in less than 40 minutes.

OnePlus devices have long been among the most stylish on the market, and the OnePlus 8T is no different. It retains the glass-backed aluminium chassis of its predecessor, which feels cool and premium, although the rear of the device also introduces some significant changes. There’s now a prominent camera housed in the top left corner of the rear of the device, similar to Samsung's Galaxy S20 range, and there are two new colour versions: Aquamarine Green and Luna Silver - we’ve been testing the latter.

There have been some tweaks around the front of the device too, as the OnePlus 8T is completely flat, ditching the curved edges seen on the OnePlus 8 and 8 Pro. We actually prefer this new approach. The handset is less prone to glare and felt better protected against potential shattering, though thankfully we haven’t tested this (yet).

In terms of size, the OnePlus 8T is not too dissimilar from the OnePlus 8. It’s slightly wider at 74.1mm (versus 72mm), and a tiny bit chunkier at 8.4mm (versus 8mm). For those looking to upgrade from last year’s OnePlus 7T, the two phones are almost identical in size.

The OnePlus 8T features the same inoffensive punch-hole cutout as the OnePlus 8 and 8 Pro, which you’ll barely notice once you become immersed in a game or video content, and it boasts the same slim bezels around the display.

Things remain unchanged elsewhere too. You’ll find the same bottom-mounted USB-C port and dual speakers, a volume rocker on the left-hand side, and alert slider and standby buttons along their right edge. 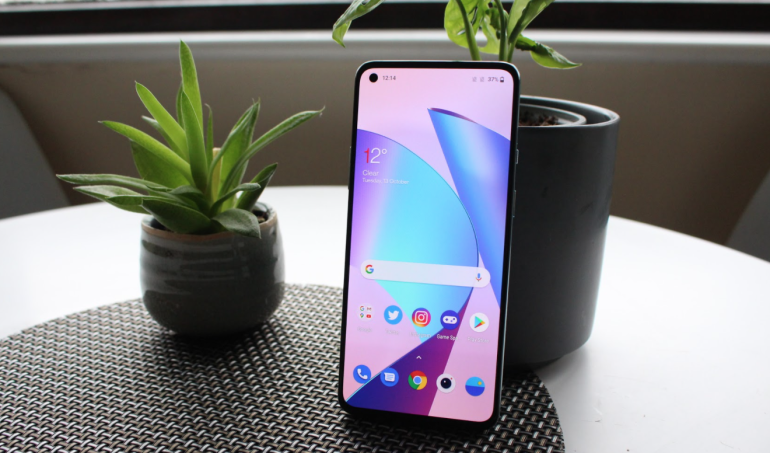 The screen on the OnePlus 8T is a combination of features from the OnePlus 8 and OnePlus 8 Pro. It measures in at 6.55-inches and features an FHD+ resolution, like the former, and boasts the 120Hz refresh rate that was previously reserved for the top-end model. This means the handset’s AMOLED panel will refresh 120 times a second, rather than 60 or 90 times a second, which makes scrolling and swiping feel silky-smooth - particularly compared to the 60Hz display on the OnePlus 7T.

While not quite as punchy as the QHD+ panel on the OnePlus 8 Pro, the 2400 x 1080 resolution display is perfectly crisp and sharp, and its HDR10+ support makes it a great phone for binge-watching Netflix. The screen is more than bright enough too, boasting an impressive 1,100 nits of brightness.

Like all of OnePlus’ handsets since the 6T, the OnePlus 8T has a fingerprint sensor embedded into the screen. Although we prefer a hardware-based fingerprint scanner, the in-screen scanner works perfectly well and it’s impressively quick, though it took us a few attempts to set up. Face Unlock is supported too, though it’s worth noting that this will struggle to function in bad lighting. 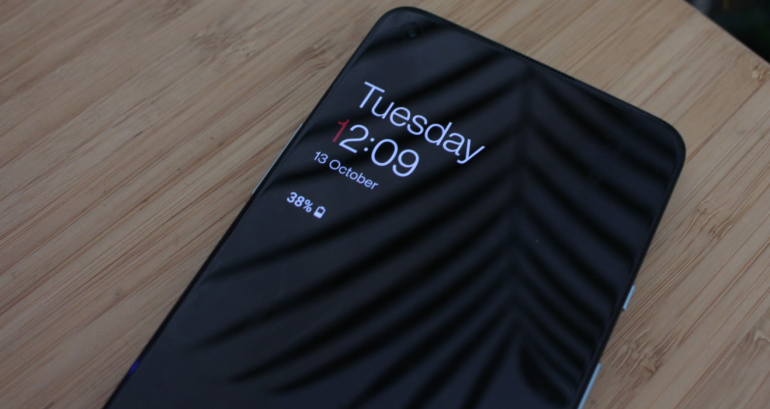 This processor comes paired with 8GB RAM and 128GB storage on the Lunar Model we’ve been testing, while the Aquamarine Green variant ups that to 12GB RAM and 256GB storage.

Even though we were using the lesser-spec model, we have no complaints when it comes to overall performance. The OnePlus 8T is as fast as you need it to be, switching between apps and games without delay.

And for those who plan to use the handset for heavy gaming, it comes with a new vapour chamber that’s almost 300% larger than that found in the OnePlus 8. This uses graphite and thermally conductive silicone grease to dissipate heat effectively across your device, ensuring optimal system performance.

Thanks to the inclusion of the Qualcomm Snapdragon 865 SoC, the OnePlus 8T also, unsurprisingly, comes with 5G connectivity. While 5G is yet to roll out fully across the UK, those who live in supported areas can enjoy super-fast download speeds; with a 5G SIM in the OnePlus 8 Pro, we achieved 5G download speeds of up to 100Mbps.

While an improvement on paper, the OnePlus 8T’s new features - such as its 120Hz screen and Always On Display - means you probably won’t notice too much of a real-world boost. We found our OnePlus 8T required a charge most evenings, although we were using the handset heavily and had the Always On Display on at all times.

While the OnePlus 8T’s battery life is somewhat average, its baked-in charging technology is not. It’s the first OnePlus device to come with Warp Charge 65, which as its name suggests is a major improvement over Warp Charge 30.

This means, as long as you’re using the bundled charger and charging cable, you can get a “day’s power” (around 60%) after just 15 minutes on charge while keeping it plugged in for 38 minutes will re-juice the smartphone to full.

On the software front, the OnePlus 8T ships with Android 11 right out of the box, topped with its latest OxygenOS 11 release. This introduces some welcome resign changes, including new minimalist animations and gestures that make the handset more iPhone-like.

There’s also a built-in Dark Mode, voice notes, a one-handed mode and Always On Display (AOD). OnePlus allows you to customise the AOD; there’s a digital-wellbeing focused option, for example, along with ‘Canvas’ AOD that turns your photos into sketches. 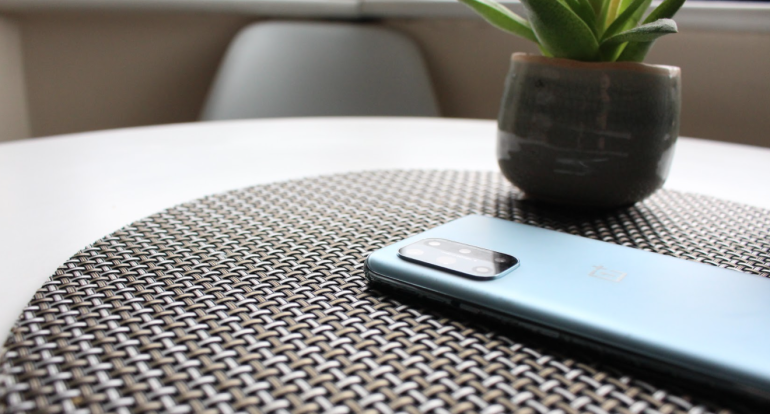 There’s a quad-camera system on the OnePlus 8T, much like that on the flagship 8 Pro. This comprises a 48MP (Sony IMX689) main camera, a 16MP ultra-wide lens with a 123-degree field of view, a 5MP macro camera and a 2MP monochrome lens that takes solely black and white images.

While this sounds like a major upgrade over the OnePlus 8’s triple-camera setup, it’s actually not that different. The 48MP and 16MP lenses remain unchanged, the macro camera has been upgraded from 2MP to 5MP, and there’s the addition of the monochrome lens, which you’ll likely never use anyway.

While this lens does produce crisp black-and-white images, we would have preferred a telephoto lens, particularly as this was a feature found on the OnePlus 7T. This lack of telephoto lens meant macro images were more difficult to capture, and the OnePlus 8T appeared to struggle with close-up and heavily zoomed-in shots.

The other cameras perform similarly to those found on the OnePlus 8T. The 48MP lens, which automatically captures images at a 12MP resolution, produced bright and detailed images in well-lit locations and natural light.

And its Nightscape mode means it takes reasonable photos in an overcast environment, though these can often appear a little noisy. The Portrait mode, too, wasn’t as impressive as others we used, with the OnePlus 8T implementing aggressive smoothing that can make you look somewhat washed out.

It’s a similar story with the 16MP wide-angle lens, which does a good job of capturing plenty of detail into an image, though these images suffer from distortion once you start to zoom-in.

Around the front, the OnePlus 8T packs the same 16MP front-facing camera as its predecessor. The lens captures perfectly-detailed selfies and will be more than ample for video calls. 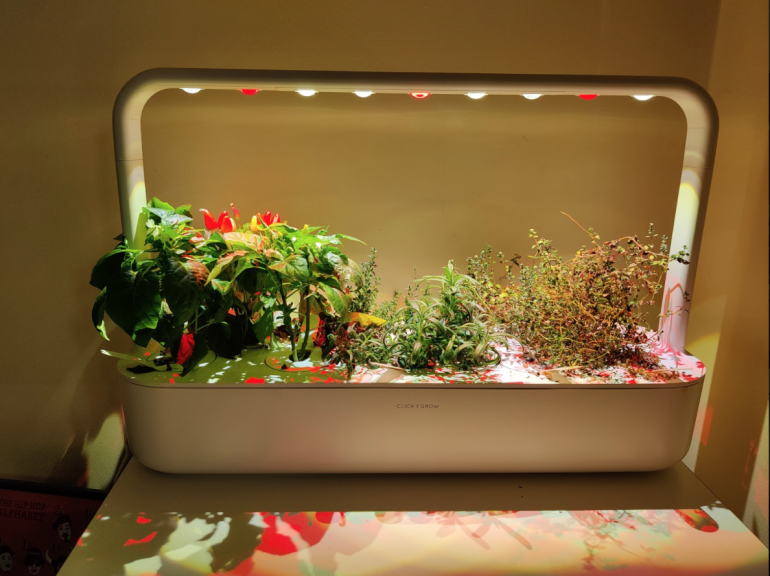 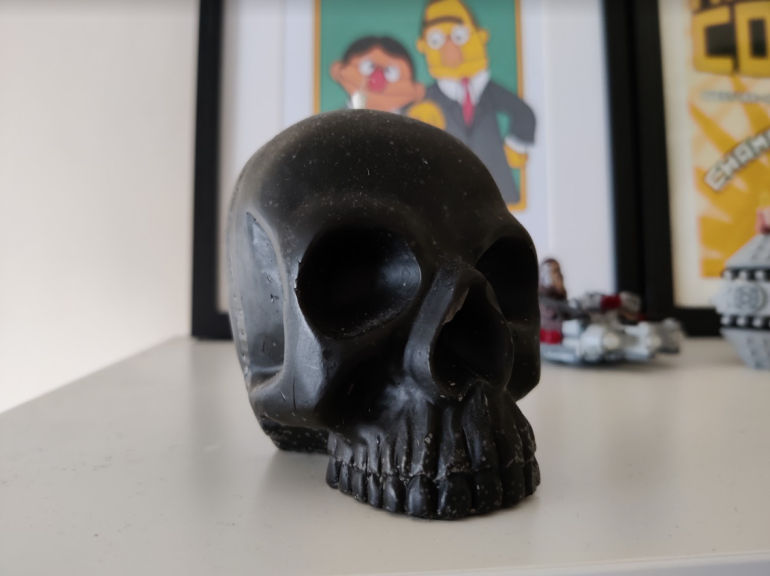 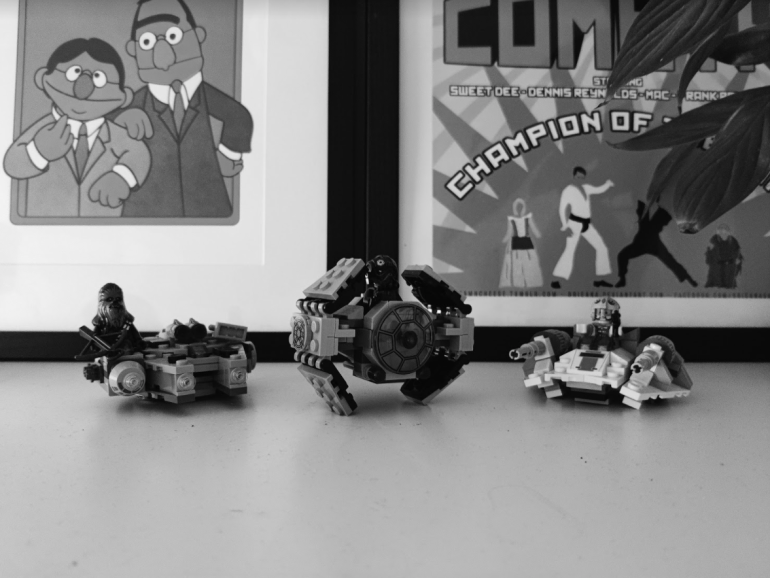 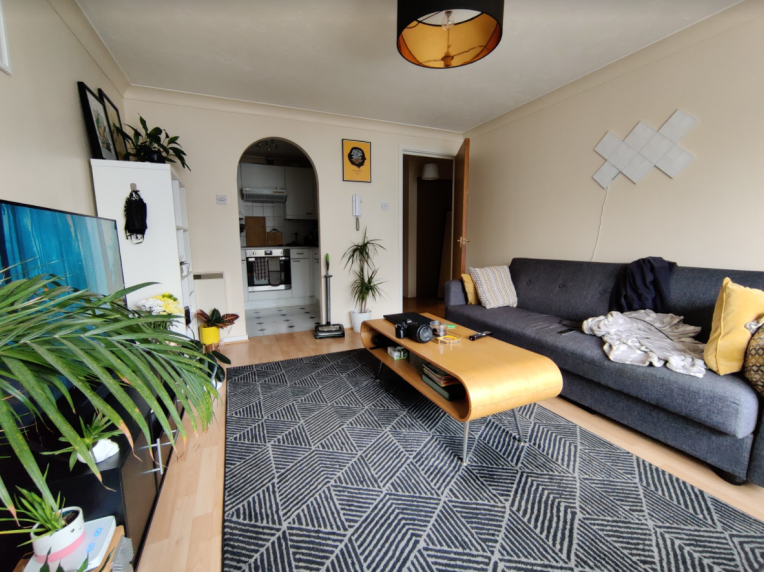 The entry-level 8GB/128GB OnePlus 8T model will be available for £549, while the higher-spec 12GB/256GB variant will fetch £649. Impressively, that’s £50 cheaper than the equivalent OnePlus 8 models cost, despite the handsets’ upgraded 120Hz display, quad-camera setup and Warp Charge 65 battery technology.

It’s without a doubt a decent upgrade for owners of the OnePlus 7 and OnePlus 7T, which shipped with 60Hz screens and Qualcomm’s now-dated Snapdragon 855 processor.

That said, however, the arrival of the OnePlus 8T does seem somewhat unnecessary, particularly given the six-month-old OnePlus 8 will no longer be offered. It’s also added an extra layer of complexity to the OnePlus lineup, which now boasts three differently-named products; the OnePlus 8T, OnePlus 8 Pro and the OnePlus Nord.