The OnePlus Nord is quite possibly the most interesting phone the Chinese company has launched in recent years. That’s not because it boasts the flashiest features or most elaborate design, but rather because it marks the resurgence of the mid-range OnePlus smartphone - a rare sight not last seen since 2015's ill-fated OnePlus X.

Despite costing just £379 (or £469 is you opt for the higher-spec 12GB/256GB model), the OnePlus Nord boasts many features that are usually reserved for higher-end devices, including a quad-camera setup complete with optical image stabilisation, a 90Hz screen and support for 5G connectivity. It also delivers the same level of performance you’d expect from a flagship Android device, despite costing a fraction of the price.

The OnePlus Nord isn’t your typical mid-range smartphone, as it boasts the same high-end design as its OnePlus 8 and 8 Pro siblings. You’ll find the same metal frame sandwiched between glass on the front and rear, minimal bezels surrounding the 6.4-inch OLED screen, a fingerprint sensor embedded in the display, and a duo of eye-catching colours. The OnePlus Nord is available in Blue Marble and Grey Onyx variants (we tested the latter).

Although it feels a little plasticky compared to its flagship predecessors (and is more susceptible to fingerprints) the OnePlus Nord still feels like a solid, premium device in the hand. It’s easy to operate with one hand too, despite its ample 6.4-inch display. The Nord measures in at 158.3 x 73.3 x 8.2mm and tips the scales at 184g, which means it’s shorter than the OnePlus 8, albeit slightly thicker and heavier.

Design-wise, you’ll find all the usual bells and whistles. There’s a standby key on the right-hand side of the glossy chassis, along with OnePlus’ familiar alert slider that allows you to quickly switch between silent, vibrate and loud modes. A volume rocker sits on the opposite side, while on the base you'll find a centralized USB-C port flanked by a speaker and a dual SIM card port.

Unlike the OnePlus 8 Pro, however, there’s no official IP rating, which is hardly surprising given this feature was also absent on the OnePlus 8. The company tells us that, despite this, the Nord offers a certain level of water resistance which means it’ll likely withstand a drop in the toilet, but we wouldn’t recommend you take it swimming with you.

That’s not the only corner OnePlus has cut in order to keep the price of the Nord impressively low. While the screen continues to dominate the front of the handset, with the only interruption its punch-hole cutout that houses two front-facing cameras, the screen lacks the elegant curved edges of the flagship OnePlus 8 handsets.

The camera bump, too, is not as sophisticated. The oblong array, which houses a quad-camera setup, is mounted on the right side of the phone instead of down the middle. It also protrudes from the handset by a couple of mm, which means the device sits awkwardly when you place it down on a table. 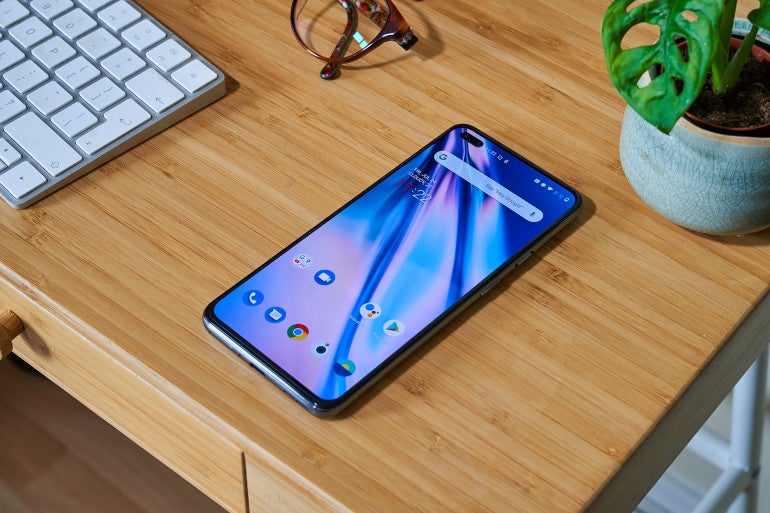 The OnePlus Nord punches way above its weight when it comes to its display. Specs-wise, the panel is almost identical to that found on the Oppo Find X2, with the Nord boasting a 6.44-inch AMOLED display with a 20:9 aspect ratio, a Full HD+ (2400 x 1080) resolution, and a 90Hz refresh rate.

Unsurprisingly, the display is bright and clear, blacks are deep and punchy, animations are fluid and responsive, and with a maximum brightness level rated at 1,000-nits, it’s easily visible in bright sunlight too.

The OnePlus Nord also has an in-screen fingerprint sensor, a very-nice-to-have feature on a phone at this price point. Perhaps more impressively, the embedded scanner on the Nord seemed to work quicker and more efficiently than the sensor on the OnePlus 8 Pro.

Under the hood, the OnePlus Nord packs a 7nm Qualcomm Snapdragon 765G processor, 8GB or 12GB of RAM, and 128GB or 256GB of internal storage space. While that’s a downgrade compared to the Snapdragon 865 SoC found inside the OnePlus 8, it’s an impressive setup for a smartphone that costs less than £500.

We found the OnePlus Nord performance as well as a flagship Android smartphone, too. Animations and transitions were smooth and swift, apps fired open in an instant and gaming on the handset was no slower than on the higher-spec OnePlus 8 series handsets. This, OnePlus claims, is because it’s made over 300 optimisations to Android 10 to ensure it performs at its best on Qualcomm’s mid-range chipset.

It may not be Qualcomm’s latest-and-greatest SoC, but the Snapdragon 765G also brings support for 5G connectivity to the OnePlus Nord, too. That makes this one of the cheapest 5G-capable smartphones on the market and means you’ll be able to enjoy download speeds up to an impressive 450Mbps.

Rounding out the OnePlus Nord’s specs is a 4,115mAh battery. While not quite as large as the OnePlus 8’s 4,300mAh offering, we didn’t find it offered too much of a compromise in the battery life department. The Nord made it through almost an entire day even after hours of near-constant screen time, with brightness levels cranked to full and the 90Hz refresh rate enabled.

While power users may find themselves reaching for a charger before the day is out, the good news is that the OnePlus Nord supports Warp Charge 30T fast-charging, which will re-juice the Nord from empty to 70% in just half an hour.

There’s another novel battery feature in the form of Smart Charging Optimisation, which will ensure your phone isn’t sat fully-charged for hours on end, which can cause it to degrade over time. Instead, if you plug your phone in at 10pm but won’t use it again until 6 am, the charge won’t kick in until it needs to.

Unfortunately, there’s no wireless charging support, with OnePlus dropping the feature in order to keep the price of the handset low. Again, while we miss the ease of being able to drop the handset onto a Qi pad to charge, the lack of support is unsurprising given this feature also didn’t make it onto the standard OnePlus 8. 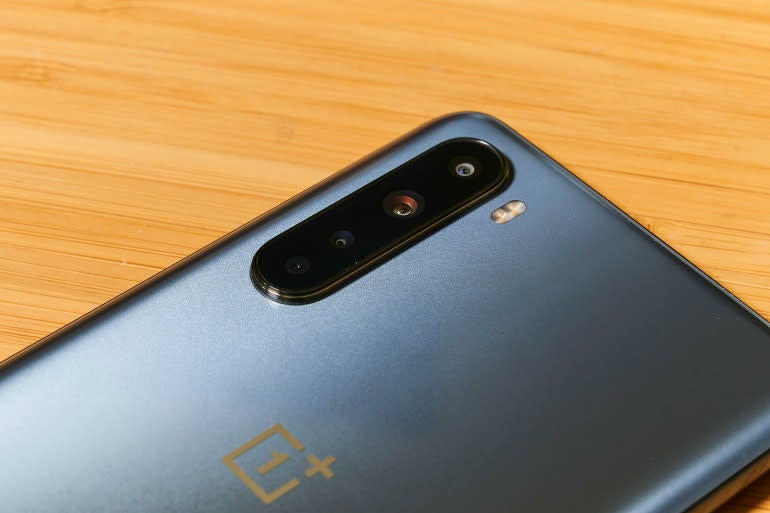 Although it costs almost half as much as its flagship siblings, the cameras on the back of the OnePlus Nord are of a similar calibre. The handset packs a four-sensor unit, which includes a 48MP (Sony IMX689) main camera, an 8MP 119-degree ultra-wide sensor (down from 12MP on the OnePlus 8 Pro), a 2MP macro camera and a 5MP depth sensor for portrait mode.

The main camera - undoubtedly the most important - has exactly the same sensor that you’ll find on the OnePlus 8, complete with the same f/1.75 aperture and optical image stabilisation, features you’ll rarely find on a mid-range smartphone. That means, with the OnePlus Nord, you’re getting a camera experience that’s on par with a smartphone that costs double its price.

Much like the OnePlus 8 Pro, the cut-price handset produces images that are vibrant, crisp and full of natural colour, even when lacking natural sunlight. We remain huge fans of the ultra-wide lens too, which enables you to cram a huge amount of detail into a single shot, though it’s not quite as impressive as the 12MP lens on the OnePlus 8 Pro.

We’re less enamoured by the macro and depth-sensors, though. While a novelty and fun to play around with, it’s unlikely they’ll ever get much use, as the low-resolution lenses fail to produce images that offer the same level of detail as those shot on the main sensor. Though it’s impressive that the OnePlus Nord packs a quad-camera setup - especially when you consider both the iPhone SE and Pixel 3a both sport just one camera sensor - we’d rather OnePlus had opted for a dual-lens system with a higher-quality ultra-wide lens.

Around the front, OnePlus has taken that unusual decision to stuff two cameras (32MP and 8MP) into the unobtrusive punch-hole cutout. The feature has been designed for ultra-wide selfies, which means you can take images with lots of friends in them without the need for a selfie stick, or a selfie crammed full of background detail. We found this worked well during our time with the OnePlus Nord and were impressed with the sharp, detailed images produced by the cameras. 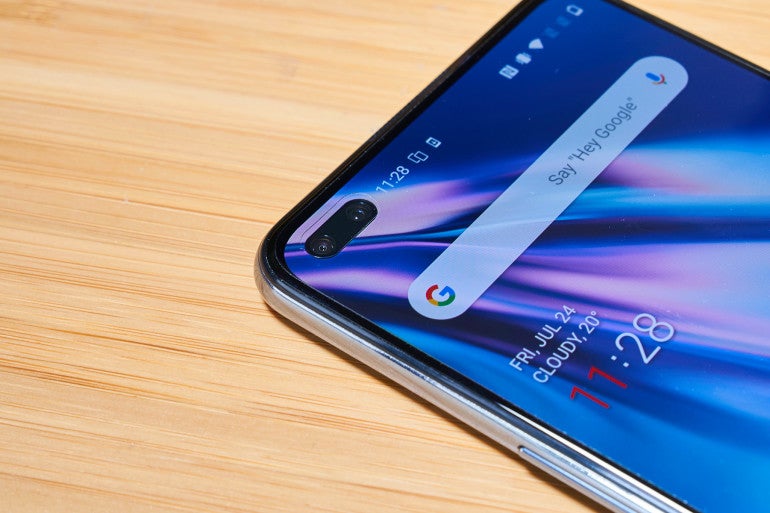 It may not be the most exciting device on paper, but the OnePlus Nord is a seriously impressive smartphone that should have the likes of the iPhone SE and Pixel 3a worried. Not only does it boast flagship specs throughout, but it also looks and feels like a premium device. It’s fast and responsive, and delivers camera performance on-par with the OnePlus 8 Pro.

Given its competitive price point, we’re not too upset by the handset’s lack of IP rating and wireless charging. After all, these were features already missing on the OnePlus 8 and reserved only for the more expensive OnePlus 8 Pro.

Priced at £329, the latest OnePlus device has a lot to recommend it.