Are you a loyal Samsung customer but the new Galaxy S20 price tag makes your eyes water?

The Samsung Galaxy A51 promises to deliver the same level of tech sophistication Samsung fans love - but at half the price.

The body of the Galaxy A51 is where the compromises made by Samsung are most visible. The design is pleasant enough with a smooth frame and a subtle pattern of intersecting lines at the back, but the materials are different from what you’ll find on the likes of the Galaxy S20. The backplate is made of plastic rather than reinforced Gorilla Glass.

Samsung has gone all out on the screen for the A51. It is one of the sharpest and brightest you can buy for less than £400.

The material used for the body is a durable plastic that makes the device lighter while maintaining a smooth surface with a softer, warmer feel than the one you get from hardened glass.

After a few days of use, I could barely see a scratch on the surface, credit to the premium materials used by Samsung. Yet, plastic will always be more prone to abrasion, and there is no doubt your Galaxy A51 will age a lot less gracefully than a glass-backed Galaxy S20 or S10. 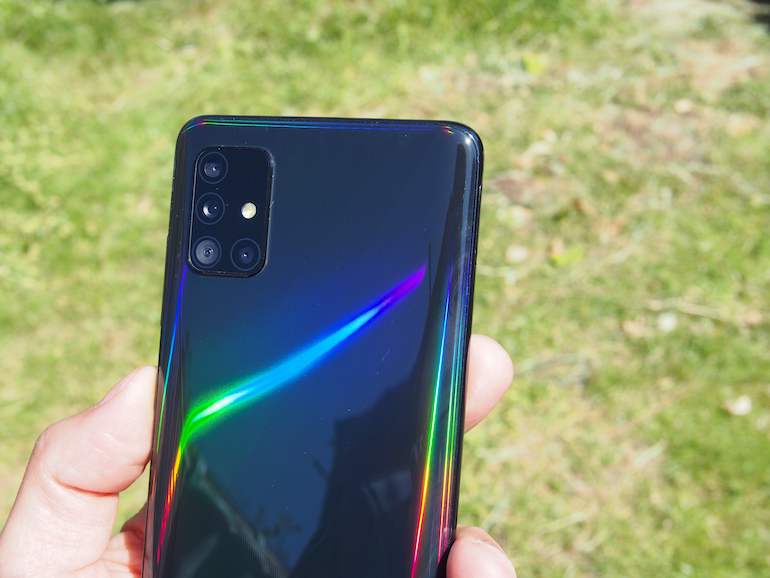 The plastic back panel carries some bold design touches by Samsung’s standards: you get interlacing pinstriping in the bottom half as well as a rainbow prism effect when the panel catches the light. 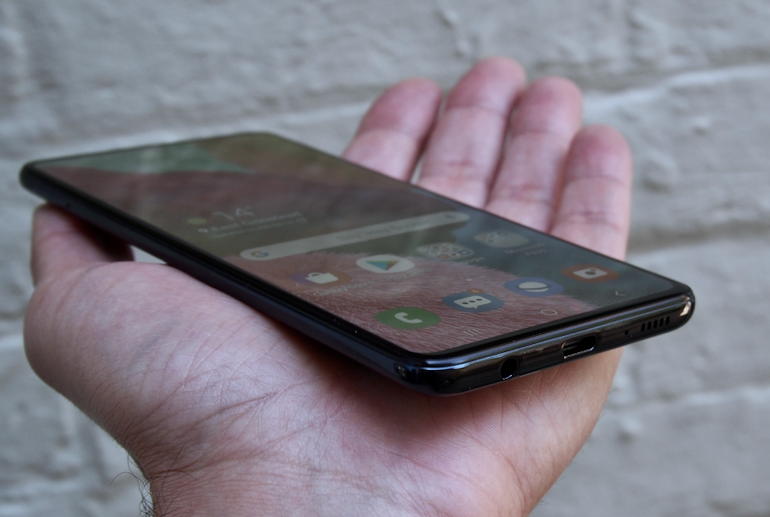 The side buttons appear no different from any other modern Samsung until you start fiddling with them. Both the volume and power buttons are plastic, another compromise that makes the A51 feel slightly less robust than other competitors at this price point. 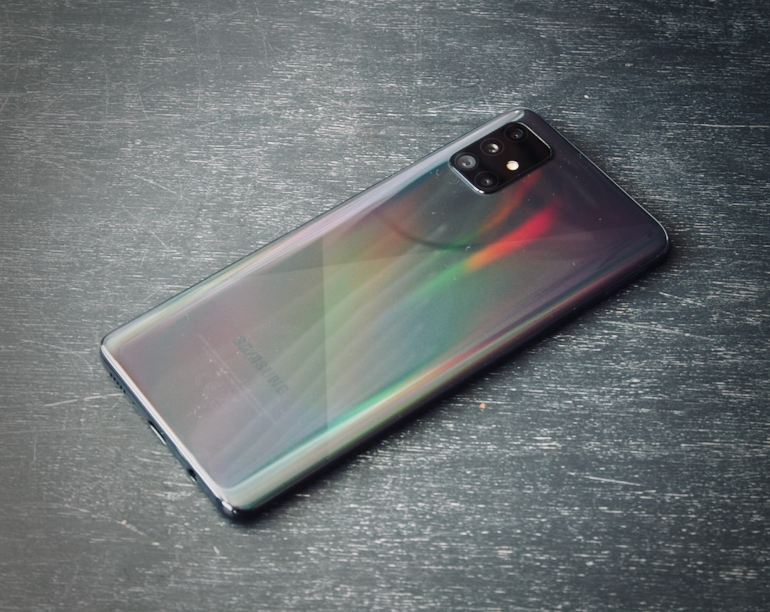 The back of the Galaxy A51 in another light. The surface is very smooth, and it is not unusual for it to slide off sloping surfaces when you least expect it. Unlike other brands, Samsung doesn’t include a protective cover with its devices. Luckily there are plenty of cases out there to suit all budgets.

The front of the device is built with reinforced Gorilla Glass albeit version 3 rather than the version 6 seen on more expensive handsets. The A51 is not likely to show significant scratches, even after a few months of use, but drop resistance is limited compared to the Gorilla Glass 6 used on the Galaxy S10/S20.

The screen is a flat 6.5-inch OLED display with a visible black frame around it and a pinhole-style selfie camera. Not having an edge-to-edge display is perfectly acceptable at this price point and all you need to know is that when it comes to the screen quality, you’re getting your money’s worth.

The display resolution is a respectable 1080x2400, and a pixel density measured at 405ppi puts the A51 at the top end of the mid-range price bracket.

Brightness is impressive in almost any situation, and I have found that the screen is pleasant to use even in full sun.

There are limits, of course, so don’t expect to be able to watch a movie while lounging in the sun.

Colours appear a bit too saturated, but that is easily fixed by reaching for the display settings. Switching from Vivid Mode to Normal Mode will result in more realistic tones, less eye strain and some reduced battery consumption. 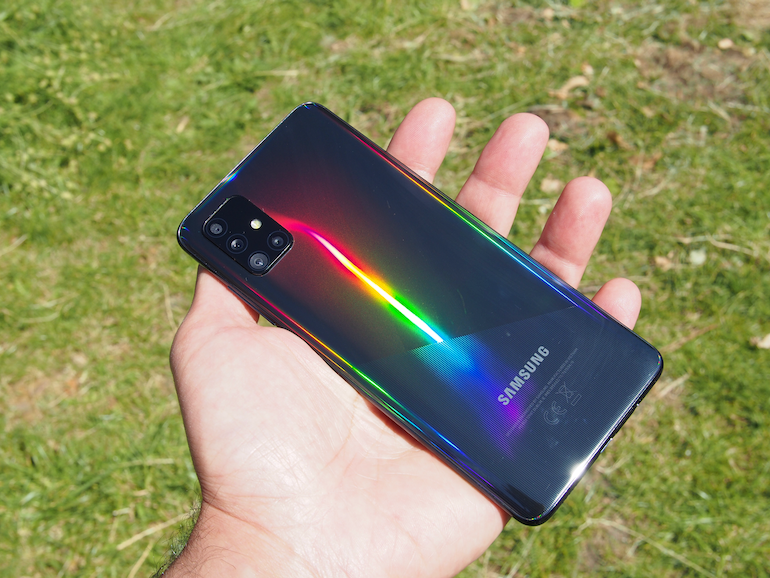 Unlike the S series, the A51 is not water-resistant. Any well put together device will, however, have some splash resistance and I wouldn’t think twice before wiping it with a wet cloth or spray it with sanitiser regularly. Washing it under the tap is not advised. 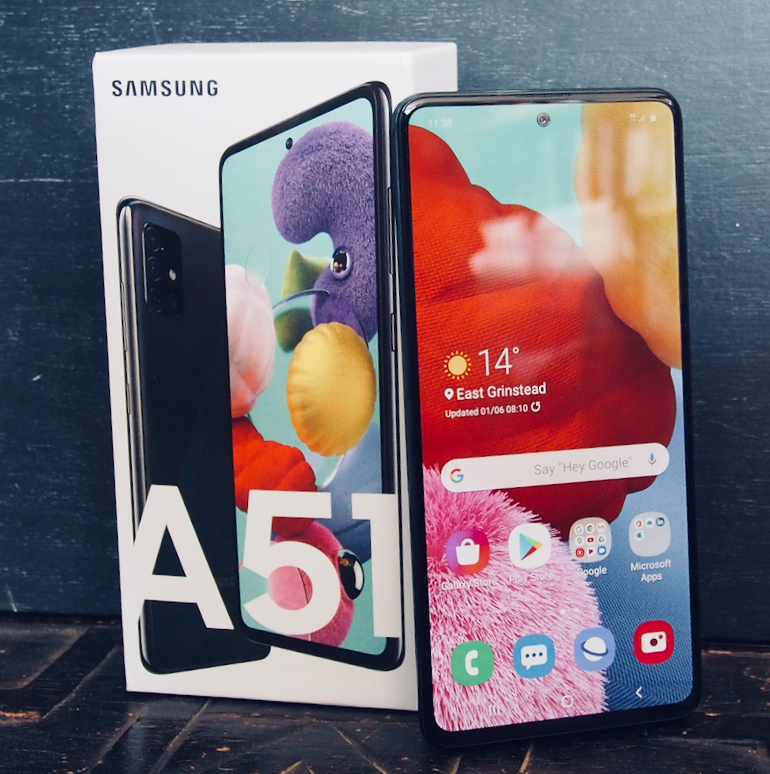 The Galaxy A51 uses the Samsung One UI system. This Android skin is one of the most refined in the industry, with a high level of customisation and an overall design that is the culmination of almost ten years of improvements.

Judging the real-world performance of a phone can be a bit tricky as different users have varying needs and expectations. Gaming can also be too broad a term to use a yardstick to assess the abilities of a device. Is your definition of relaxing downtime a session of Word Search and Piano Tiles or you’re more into first-person zombie hunting in realistically rendered environments?

I’ll keep it simple and answer the one question that pops up whenever people ask me about a phone: Does it lag?

It seems that even people claiming to “never use the phone for anything but calls and the odd WhatsApp chat” are sensitive to the sluggish behaviour of a phone.

Does it lag? Honest answer: yes, it does, and this puts the A51 slightly behind its direct competitors at this price range.

Switching between apps and opening the camera can take a bit longer than comfortable, while demanding games can suffer from some stutter on loading. Is it a significant issue? Not for everyone.

For many people, the reliability of the Samsung brand, and its familiar interface are too essential to be ignored. 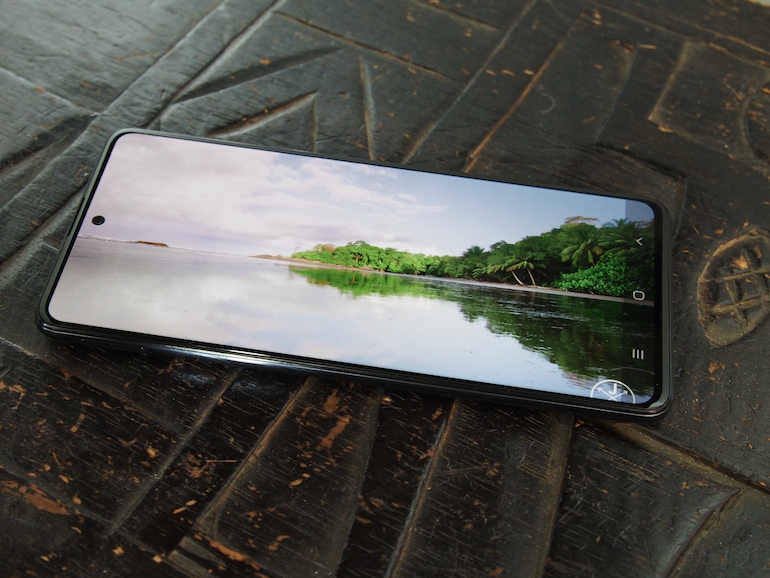 The Galaxy A51 is perfectly suited for high-resolution video streaming.

Slow, often unresponsive and generally irritatingly unreliable, biometric unlocking is another sore point for all Samsung phones. The on-screen fingerprint is nowhere near as good as the equivalent we have tested on similarly priced devices like the Huawei P30 Lite or the Oppo Reno 2. Luckily, you can set up face-recognition and, using a combination of the two, and with a little practice, things will be less frustrating. 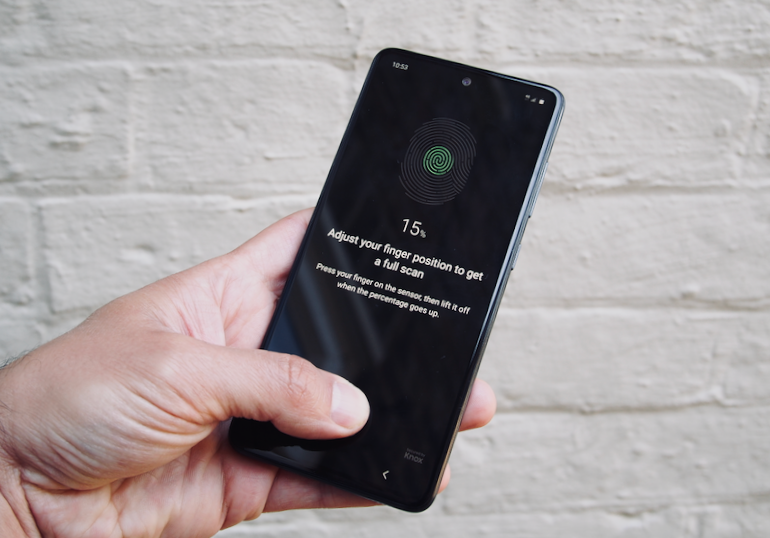 The on-screen fingerprint can be frustrating at first. My advice is to also enable face-recognition for a better chance to fast unlocking every time.

Given the large screen, battery performance is acceptable and never felt the need to reach for the charger during the day.

The 15W adapter charges the battery from zero to around 30% in 30 minutes. 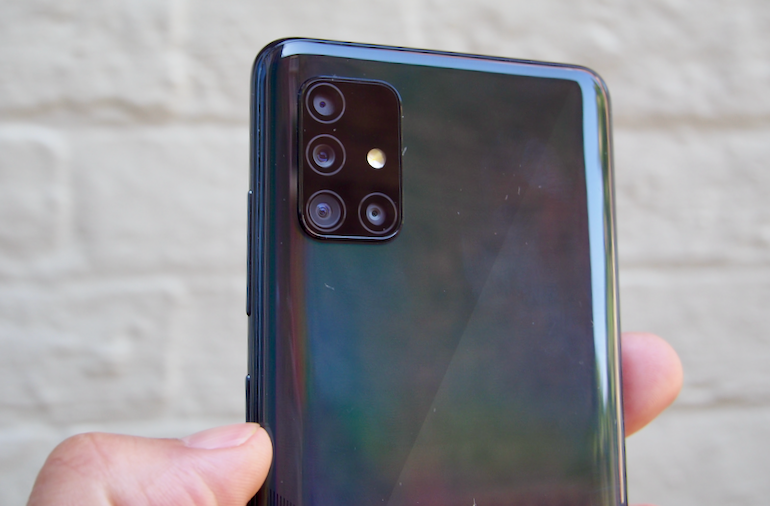 The four lenses at the back make the A51 look expensive. The standard camera is good but there is no Zoom or Optical Image Stabilisation

The camera setup on the A51 includes a 48-megapixel central unit followed by a wide-angle and, more unusually, a macro-lens for close-ups.

The camera interface is identical to all other new Samsung devices. Intuitive and well laid out, it makes it a cinch to capture any scene. The default selection will use the standard camera, but in case you need to catch a larger area, simply tap on the trees icon and the device will switch to the ultrawide-angle lens.

When there is plenty of natural light, both modes will deliver good photos but be advised that the wide-angle is less capable in low light. Sunny beach? Wide-angle is your friend. Group photo during an evening out? Squeeze more people in by taking a few steps back.

Background-blur is supported by switching to “Live Focus” Mode. It automatically applies a soft focus to the background, and it will enhance small object close-ups and portraits. The effect can be easily overdone, but you can always tweak it by opening the image from the Gallery app.

In terms of image quality, the Galaxy A51 does a good job handling colours with a pleasant level of saturation.

The scene optimiser will also detect the light conditions as well as the type of subject, making automatic adjustments to the exposure settings. In good natural light, it is hard to tell the A51 from a top of the range Samsung but its limitations are more visible in low-light where there is a high level of noise and colour can be muted.

In darker settings, the camera of the Galaxy A51 loses the realistic colours that you get in better light and instead tries to achieve an overall balanced level of brightness.

Samsung has also included a “Night Mode” feature. It compromises on the resolution and produces soft-looking images with muted colours. Still, if you want a photo in a dark setting, and you can hold the phone steady for a few seconds, results are impressive.

The primary camera is capable of capturing 48-megapixel photos. More megapixels the better right? Not quite. By enabling the super-high resolution, you lose the automatic image processing that makes Samsung cameras so forgiving no matter the light conditions. The results will suffer from the lack of dynamic range, and while some areas of the image will indeed preserve detail when zoomed in, you’ll have a worse-looking picture overall.

If you’re not in the habit of carrying light diffusers or you are not even sure what Dynamic Range is, forget the 48-megapixel option and stick to the default mode for best results.

The Galaxy A51 camera setup includes a dedicated Macro Lens for detailed close-ups. There is no autofocus, so you’ll need a bit of luck to capture a bee, but for still subjects, the Macro Mode can produce some of the best results we’ve seen. 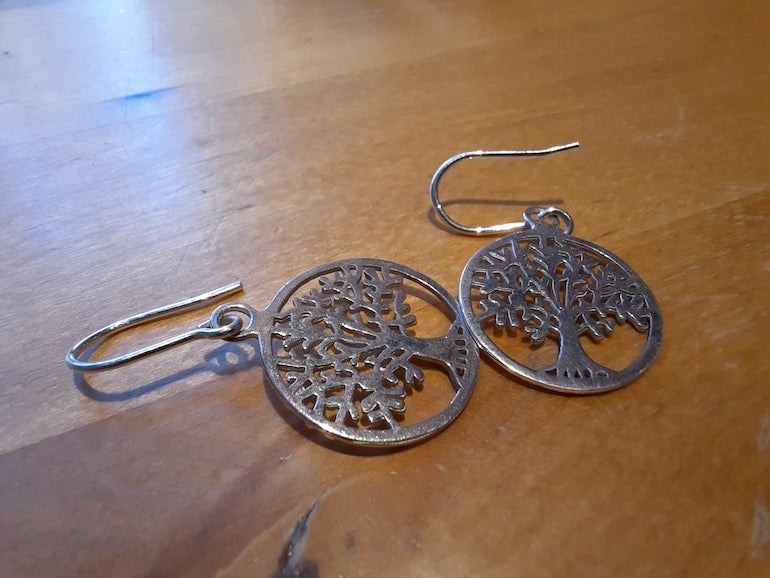 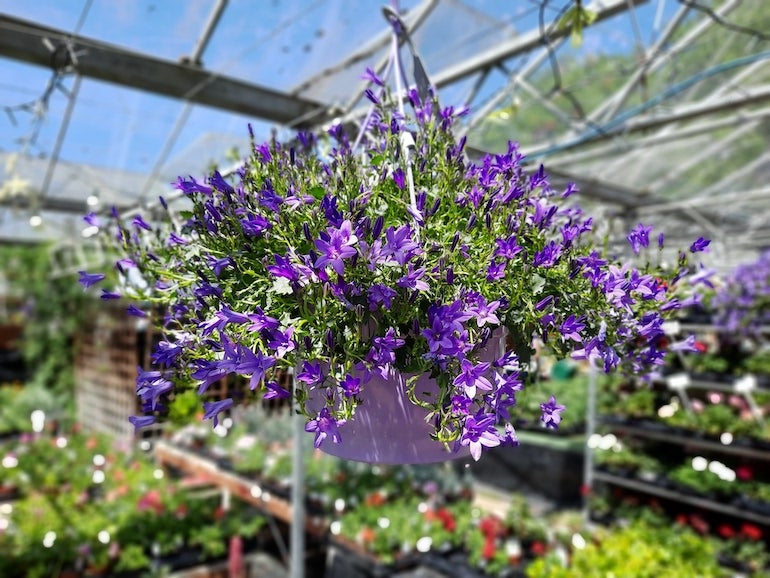 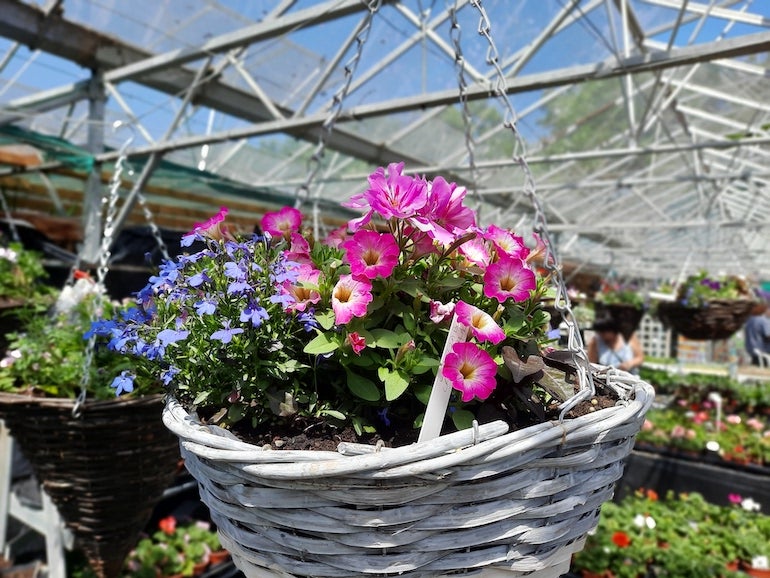 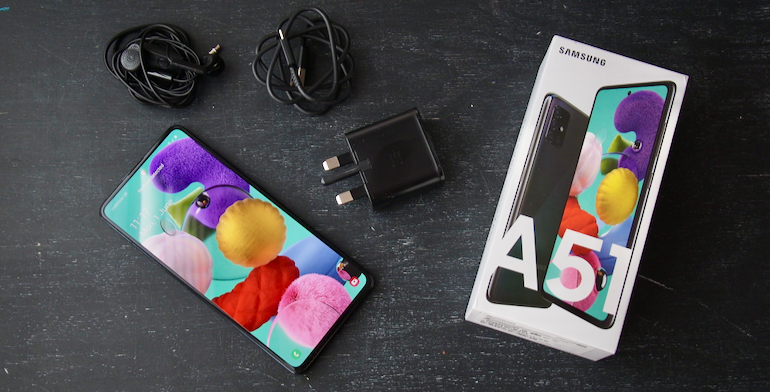 The Galaxy A51 is a good low-cost alternative to the very expensive Galaxy S20 or even S10. It offers a high-quality OLED screen, excellent design and the best software you’ll find on any Android phone.

The plastic construction and less durable glass at the front are all acceptable compromises. The same can be said for the camera, which is a good all-rounder as long as you stick with the standard shooting mode.

The only drawback, and it is a major one, is the performance. If you’re after a smooth Android experience, you may be disappointed as the A51 is outclassed by almost every other handset at this price point.

Is this a universal dealbreaker? Not necessarily. If you’re a fan of Samsung phones, hardly play any games and you’d instead stick with the familiar and well-polished Samsung UI, the Galaxy A51 makes perfect sense at £330, and you can get it for even less if you get it on a contract.

On Vodafone right now, for example, you can get a brand new A51 for as little as £23 a month with nothing to pay upfront. This also gets you a generous allowance of data plus unlimited free calls and texts.

To compare contracts, take a look at our best Samsung Galaxy A51 deals.