Introduced by Samsung as "the biggest breakthrough since the mobile phone", the Galaxy Fold promises to revolutionise the smartphone world with what is, essentially, a tablet that can be folded down and used as a mobile phone. 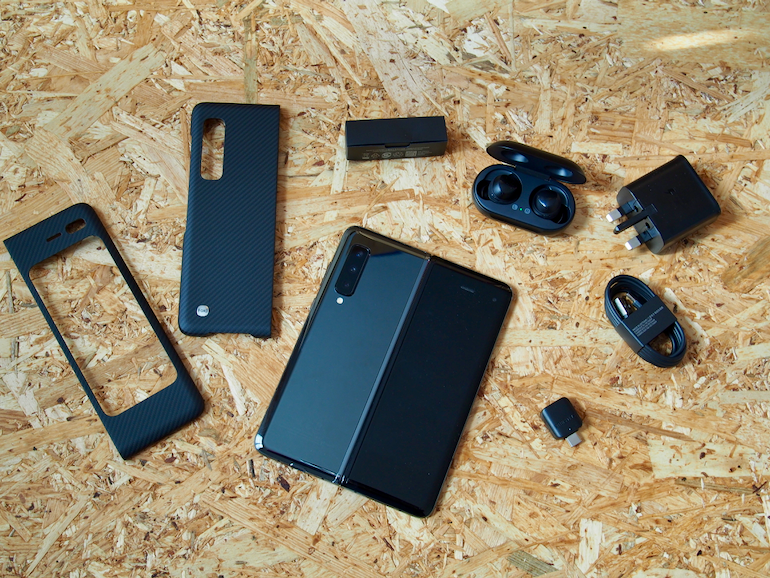 The Galaxy Fold and all its box contents. Samsung has not only included a two-piece ultra-light kevlar case, but a pair of AKG wireless earphones, and a case that doubles as charging pod too. The overall quality of the packaging and accessories is excellent and reflects the high price tag of the Fold.

The Samsung Galaxy Fold is the first genuinely different device we have seen in years. 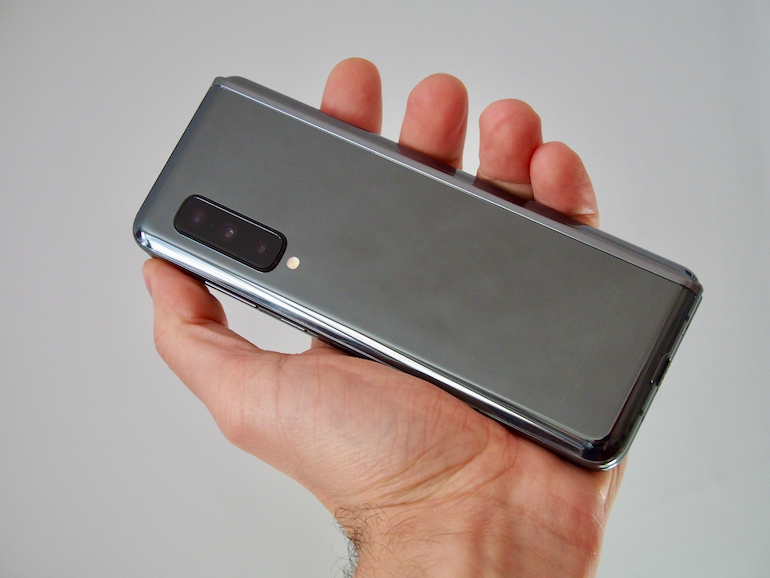 The Galaxy Fold manages to be considered both the smallest and biggest phone out there. When closed, it reminds you of the narrow mobile phones from back in the day, and the reinforced metal hinge and massive battery packs contribute to make this a pretty hefty device.

At the front of the device, you'll find a cute, fully functional, 4.6-inch AMOLED screen. It’s a bit too small to be used for things like browsing the internet or reading emails, but we really admire the seamless integration between the two screens. 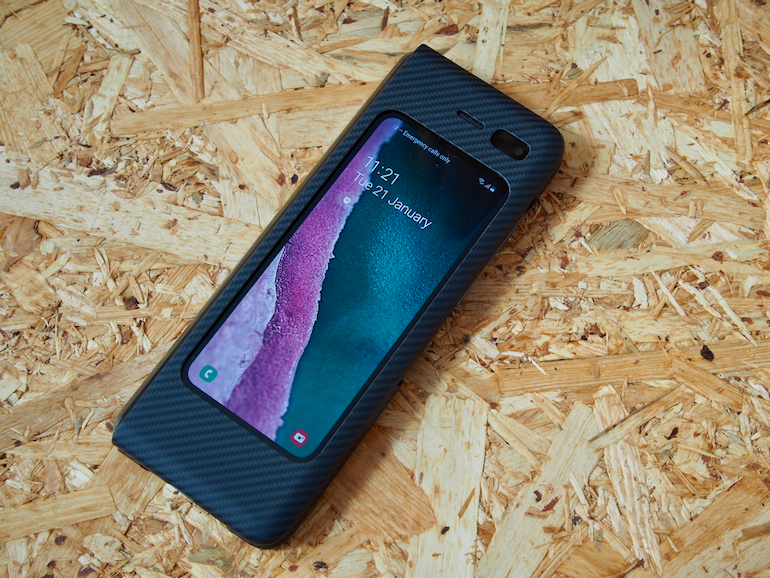 The cover screen feels small but it is a high-resolution AMOLED display that is fully functional. 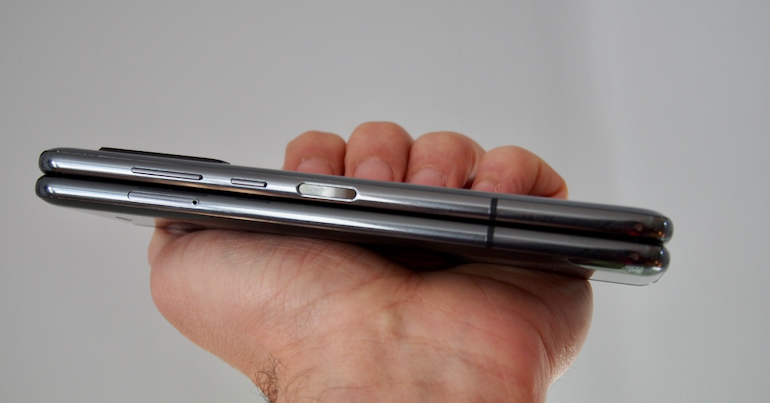 The fingerprint sensor is positioned on the side. The location feels natural, but it will not activate when the screen is on standby.

Given its thickness and overly narrow form, using this device when folded can be jarring, and you can't help being very conscious of its sheer weight. At 260g, this is by far the heaviest mobile phone on the market right now. By comparison, the mid-sized Galaxy S10 weighs around 160g so imagine carrying your average smartphone with a small banana (or two Mars bars) strapped on its back. 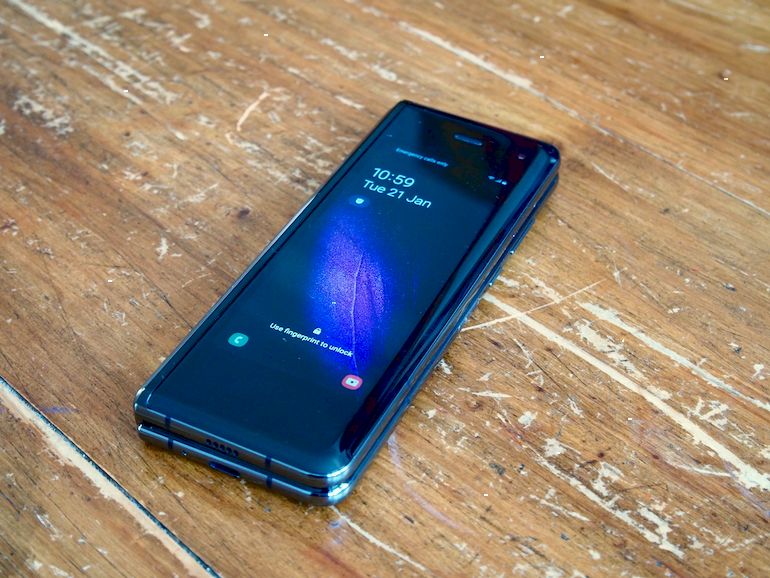 The Galaxy Fold comes with a two-part kevlar case. It’s definitely worth using as the outer glass layer is very slippery, and its mirror finish is a magnet for smudges. 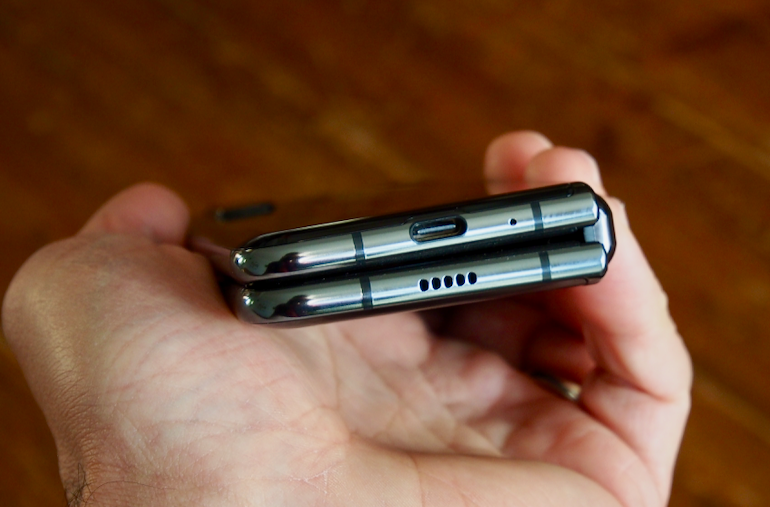 USB-C and speaker at the bottom. We were impressed by the sound quality of the double-speaker setup.

Luckily Samsung knows how to design their devices with good ergonomics, and the Galaxy Fold never feels awkward to use.

On the right side of the Galaxy Fold, you'll find the volume rocker, power button and fingerprint reader. Fingerprint unlocking is easy to set up and reliable to use. Alternatively, you can unlock the phone with a glance using facial recognition.

The act of unfolding this device will grab the attention of anyone around you. 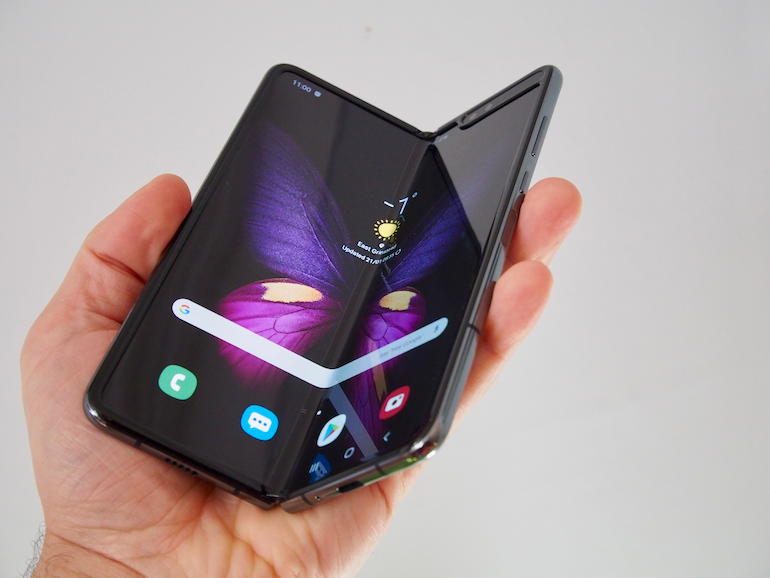 "Wait! How? Wow!". Everyone I showed this little thing of wonder was both amazed by it but sceptical of the screen's durability. After our extensive testing, we have no reason to doubt the reliability of the hinge mechanism and the screen's resistance to folding.

The hinge is undoubtedly well built. It feels sturdy and designed to prevent overextending the Display, even if some force is applied. It’s got the same high quality build we expect from all Samsung devices. 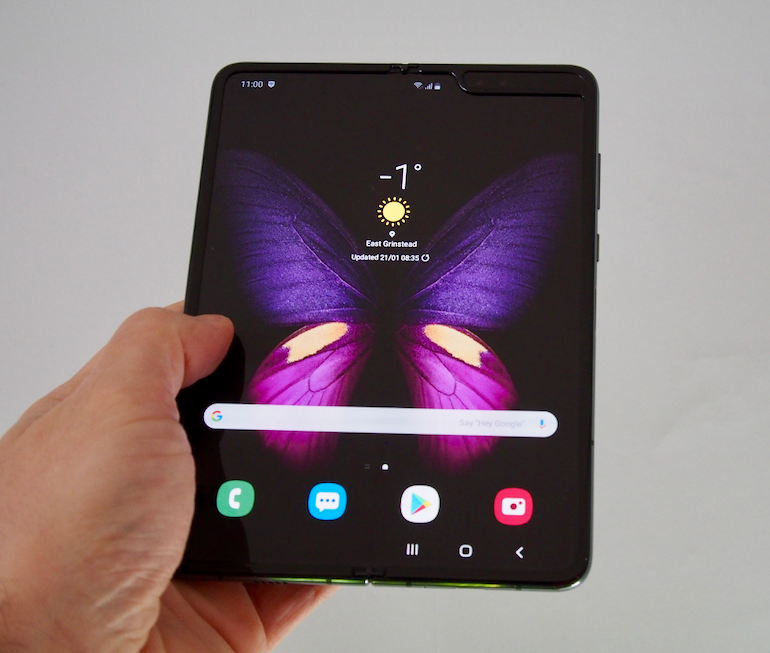 If you're familiar with using tablets, there will be nothing new in the experience of using the large display.

When it comes to the display itself, one crucial thing that you have to bear in mind is that unlike almost any smartphone on sale nowadays, there is no reinforced glass layer. The display surface is softer, made of a plastic layer that will fail under excessive strain and will be prone to scratches.

The narrow vertical crease down the middle is also another weak spot of this device and Samsung makes clear that you should take extra care when pushing the screen down the middle area. Samsung has even produced a video titled "Caring for your Galaxy Fold". The video feels very much like an ad, but it reminds the customer to go easy on their new Galaxy Fold, be aware of sharp objects and avoid contact with dust or water. 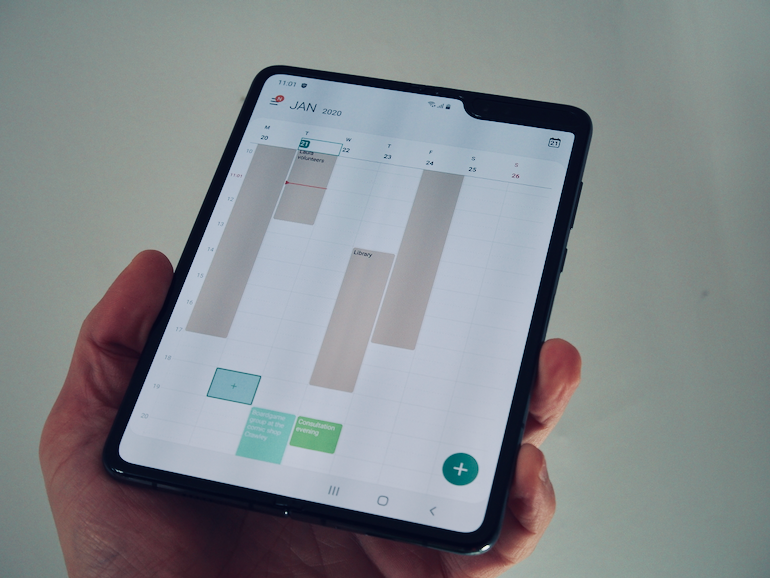 It is with productivity applications like Calendar and Maps that the Galaxy Fold makes the advantage of the large screen clear. 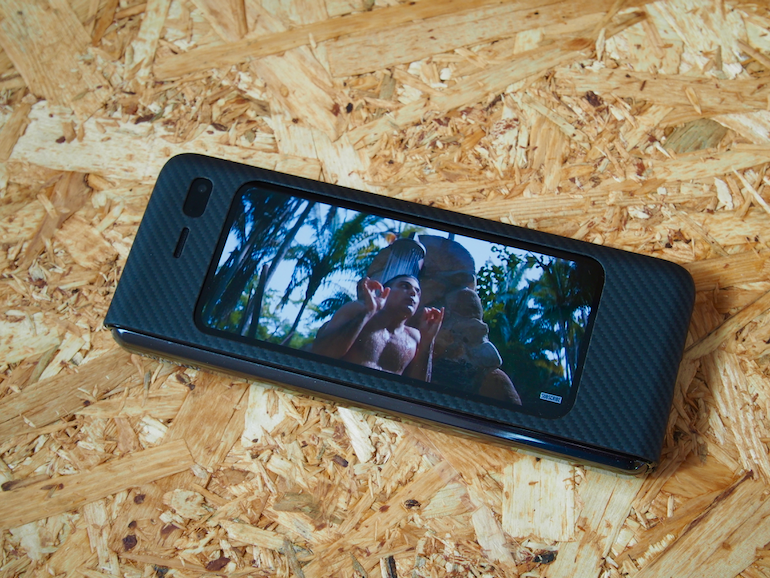 The "cover screen" gives you access to the full system and all apps. Video quality and colours are excellent. 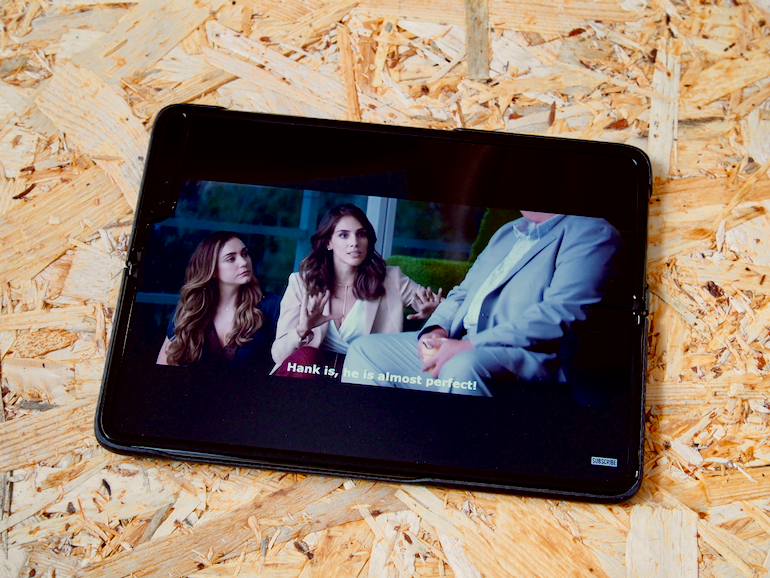 Because of the square shape of the main screen, widescreen videos are rendered within large black areas.

The square shape of the foldable screen has its drawbacks, however. Similar to old TVs, the 4:3 aspect ratio will result in heavy "letterboxing" when watching widescreen videos. When it comes to games, you will find that the vast majority will work great in this format, but there are exceptions.

The triple-lens setup on the fold comprised up of a 12MP standard wide-angle, a 16MP Ultra-Wide and a 2x Telephoto for lossless zooming. This setup is in every way identical to the one found on the Galaxy Note 10 and Galaxy S10. This Samsung flagship camera is at the time of writing, the best you can buy out there, and it delivers consistently good results even when compared to the stiff competitions from Apple and Google. 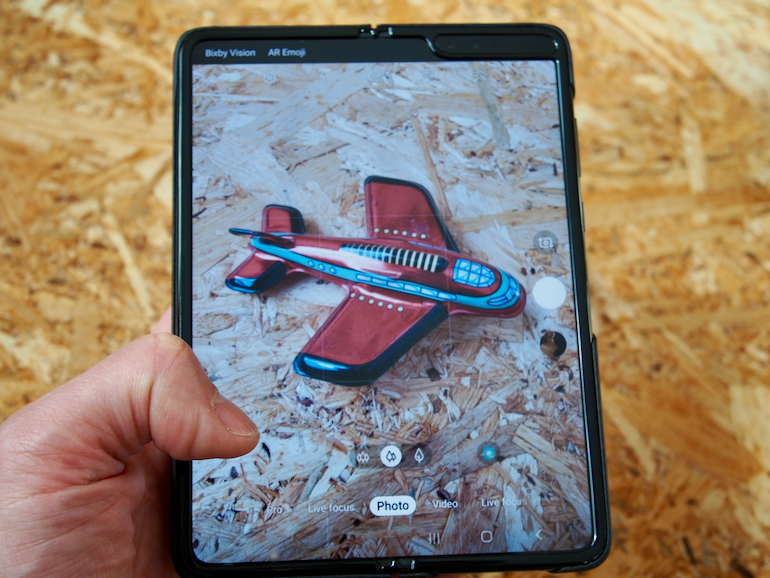 Using the big screen for the camera interface is excellent if you like having a large preview area. The quality of the images is as good as what we have seen on the Galaxy S10 and Galaxy Note 10. 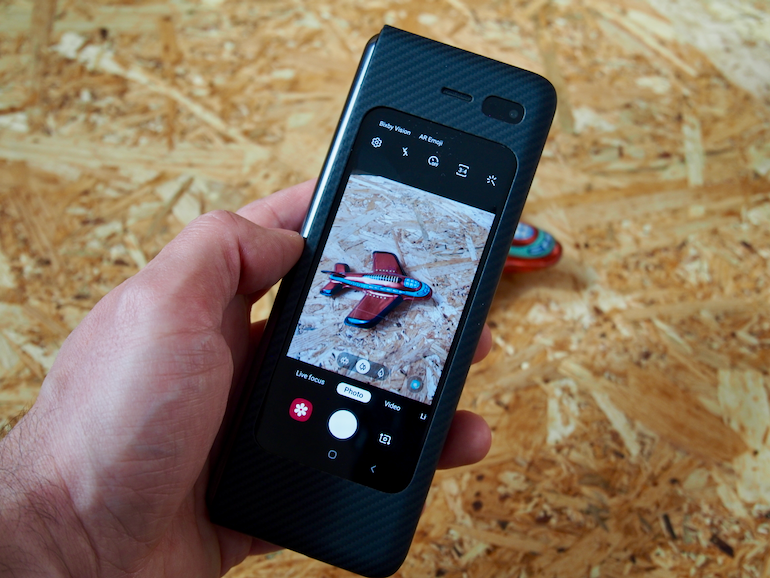 The camera can be accessed when the phone is "closed". It may not give you the same beautiful preview, but you'll find it a lot more convenient for taking pictures with one hand.

The same applies to the selfie camera, a 10MP shooter that supports wide-angle for group selfies and Live Focus for that softer background portraits. In the case of the Galaxy Fold, there are two identical sets of front cameras so that it can be used seamlessly whether the device is open or closed. 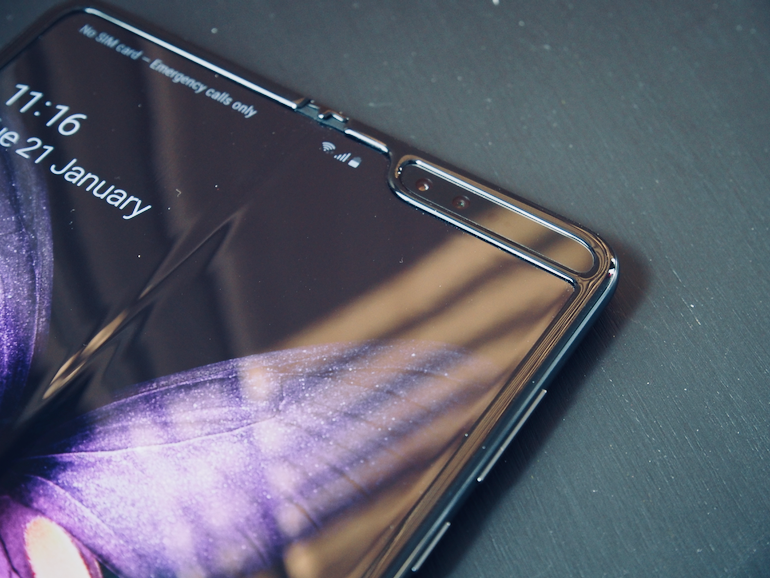 The selfie camera is hosted within a large notch on the top right of the screen.

The large 7.3-inch main Display makes this device feel very much like a tablet. Bigger is often better when it comes to productivity apps, and no other phone comes close to the experience the Fold can afford you with things like the Calendar app or Maps. 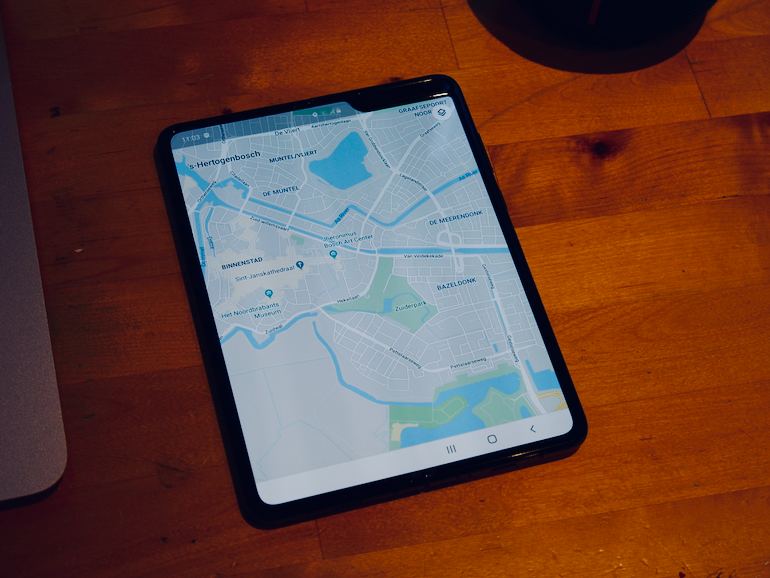 Find your way on the big screen, then close it to navigate. Maps is another application in which the Fold has a clear advantage over standard devices.

Gaming is also undoubtedly a lot more fun, and photo editing is a pleasure to use even compared to large smartphones like the Galaxy Note. The display uses AMOLED technology so you will have the same vibrant colours and deep black seen on the other Samsung flagship devices. There is also plenty of brightness that makes it perfectly usable outdoors, and the HDR+ resolution will ensure consistently high contrast.

If you're worried about the crease in the middle of the screen, don't be. While it is visible when the screen is off, and when there is glare, it disappears when you’re checking out content and will not affect your videos or games in the least.

One tiny flaw of the foldable screen is the uneven refresh rate between the two sides. Text appears to scroll more smoothly on the right side compared to the left. But on the plus side this is hardly noticeable in everyday use. 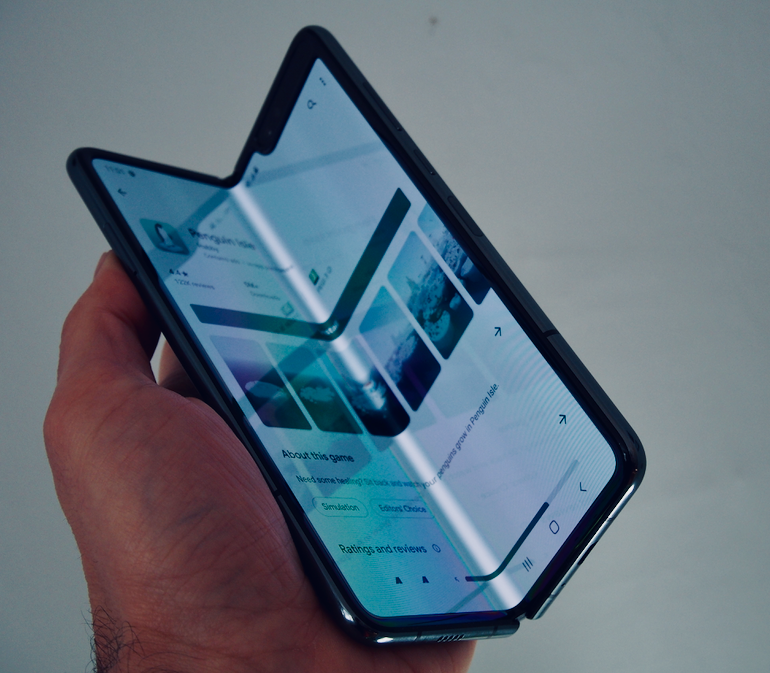 We have tested the foldable screen in a variety of conditions, and are truly impressed by its solid and seamless performance. Apart from the hardly noticeable differences in refresh rate, there is no flickering or delay when switching between the cover and the big folded screen.

When it comes to the interface, the system used is the identical One UI by Samsung and Android version seen on the latest Samsung phones like the Galaxy S10 and Galaxy Note 10. Even the processor is almost identical to the one found on the Galaxy Note so you can expect similar snappy performance whatever you throw at it.

128GB of RAM is an enormous amount, and the standard 512GB of storage space places this at the high end of what you can buy today.

The Samsung Interface has been adapted to accommodate the folding screen but remains identical to the well designed, highly customizable system found on the other high-end Samsung devices. Thanks to a feature Samsung calls App Continuity you can go from using the small screen at the front to the larger, foldable screen inside without the need to reopen the app you were using.

App continuity can sound like a small feature at first, but it greatly enhances the usability of the Galaxy Fold.

Imagine you see a new email notification at the front. You can open your email app, read the email and even start typing your reply without unlocking the screen. As soon as you realise your reply is going to require more than a few sentences, you can switch to the bigger screen by unfolding and carry on typing with no-delay.

The reverse does not happen by default, so apps are closed when the screen is folded shut, but Samsung has allowed for this to be changed to suit your needs: go to "Display Settings" and then "Continue apps on front screen" to choose which app should stay open. Messaging and Maps seem the obvious ones, but it is good to see Samsung has provided the user with this level of customisation. 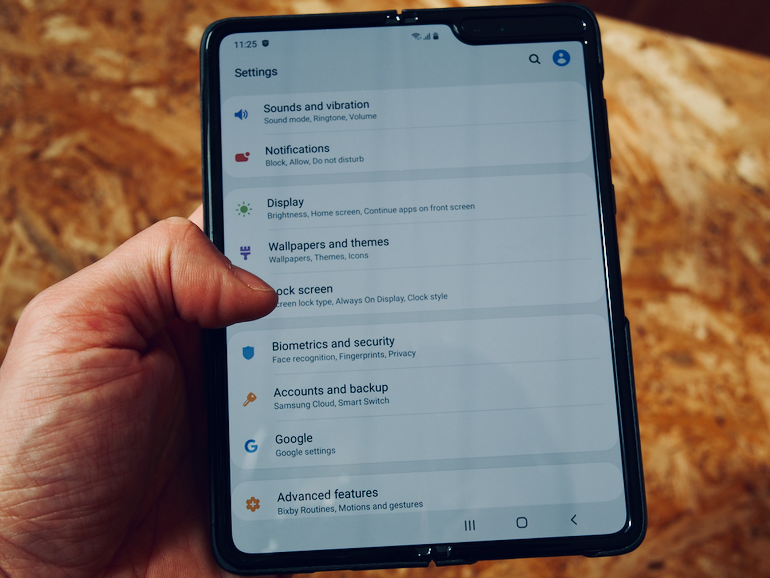 The user interface is identical to the one found in other top-of-the-range Samsung devices.

Despite being far from perfect, and carrying the expected blemishes of a first-generation device, the Samsung Galaxy Fold is the closest we have to a perfectly usable 2-in-1 device. It’s bold, it’s eye-catching and guarantees a lot of attention whenever it’s bought out.

Its folding mechanism is really satisfying, and in tablet mode it could really revolutionise your on-the-go content experience. 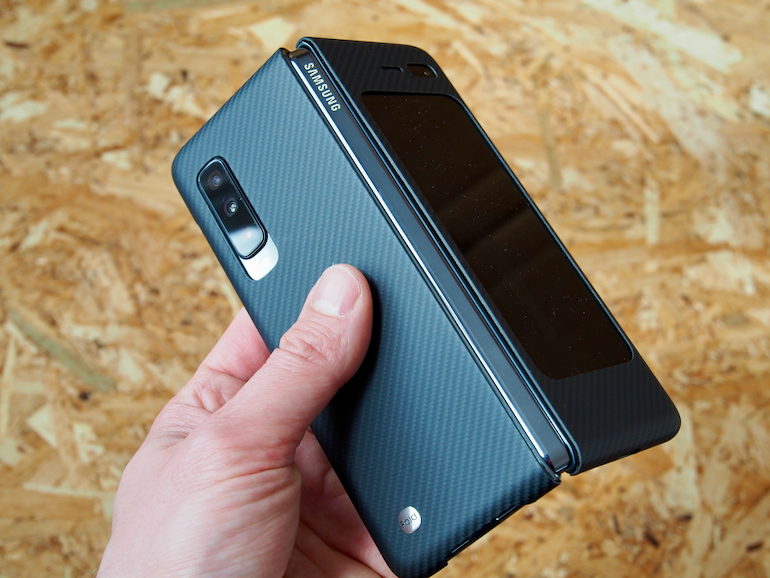 The Galaxy Fold is a well-designed, reliable device that carries the best of Samsung's expertise in mobile technology.

However, despite the hype, the Fold is unlikely to revolutionise the market overnight. It's heavy, expensive, and is nowhere near as durable as the waterproof, tough-glass clad phones that dominate the high-end market. At about £1,900, this is very much a device for the adventurous tech lovers, early adopters and business users that can see a clear benefit in a phone that can comfortably function as a tablet.

Samsung has launched its latest line of foldable phones. Find out more.