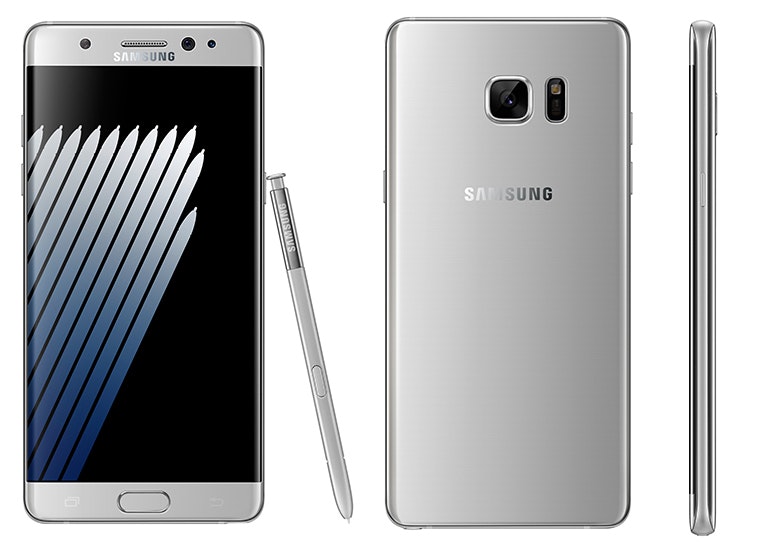 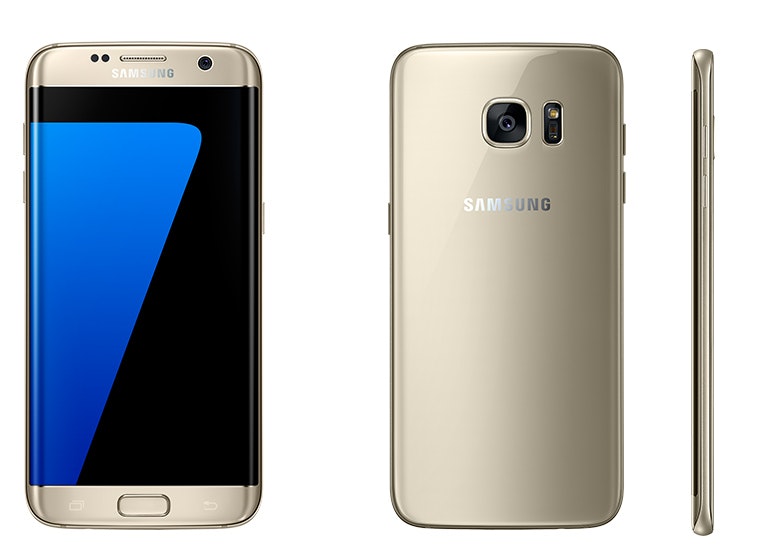 The Note brand has traditionally been reserved for 'phablets', which are a category of handset with larger dimensions that mean they're somewhere between a phone and a tablet.

But in a sign of how almost all phones have got bigger in recent years, there's actually not a great deal of difference between the Note 7 and S7 when it comes to size.

The standard S7 has a 5.1-inch screen, while the S7 Edge variant has a 5.5-inch screen. So they're really only marginally smaller than the Note 7's 5.7-inch display.

Both the S7 and Note 7 have pretty narrow bezels (that's the plastic rim around the screen) and are very slim, so neither feels too oversized in the hand. Unless you're upgrading from a 3.5-inch phone like the iPhone 4S, in which case both will feel like you're holding a monster phone.

These handsets are bursting with new technology. But on the outside, very little has changed from their predecessors.

Both phones are solidly built and feel like they'll last. But the Note 7 just edges it for us. Its symmetrical design and rounded corners make it a joy to hold in the hand.

Galaxy Note 7 at a glance

Galaxy S7 at a glance 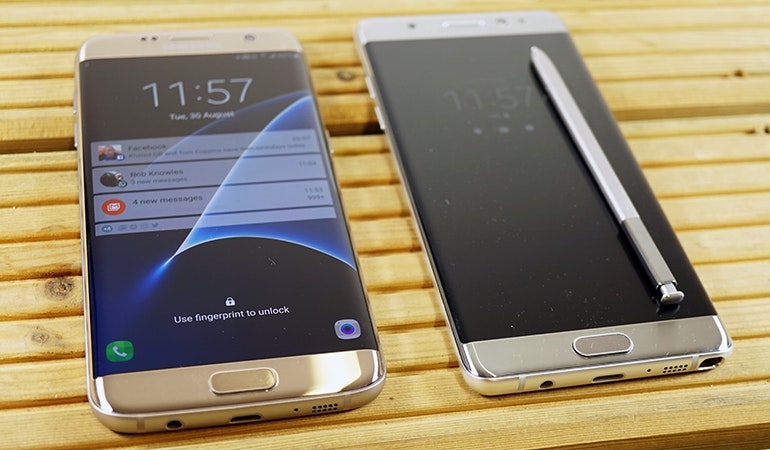 Both phones' screens have a QHD (Quad HD, i.e. a resolution of 2,560x1,440 pixels) resolution, which is among the highest around.

The term 'resolution' refers to the number of pixels, which are points of colour that make up an image on-screen. The more pixels you pack into a display, the sharper the image quality.

Theoretically, given the smaller size, the S7's screen should look slightly sharper than the Note 7's. But in reality, you can't see any difference. 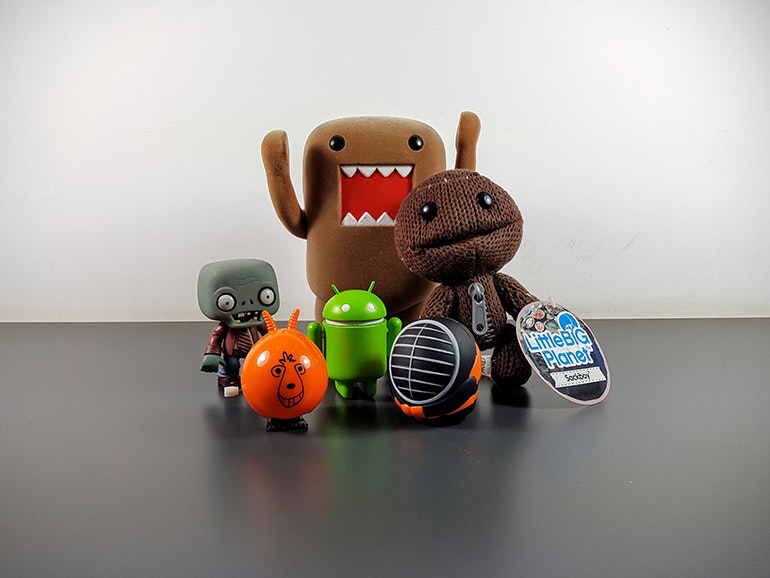 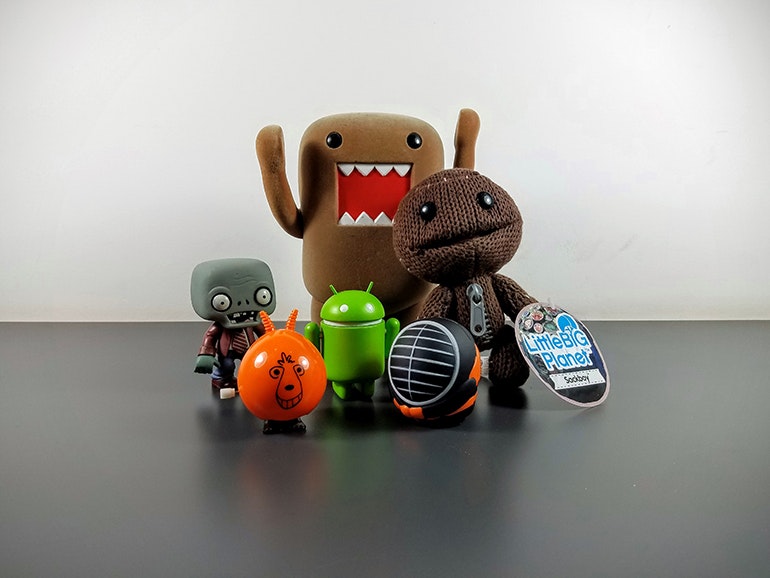 Both phones feature a 12-megapixel rear camera and a 5-megapixel front-facing camera. Photos are clear and sharp, and the colours are bright without looking artificial.

The Note 7 and S7 also feature the same neat shortcut that lets you jump straight to the camera by double-pressing the home button. This even works when the phone is asleep, as long as you have not activated a security lock or turned on fingerprint recognition.

Optical image stabilisation – which keeps the image steady while you're snapping a photo or recording video – also comes as standard on both phones.

When it comes to battery life, there's not much to choose between the Note 7 and S7. Both lasted more than a day, which is pretty standard for today's smartphones.

Both phones also feature Samsung's own TouchWiz user interface over the top of the Marshmallow version of Google's Android software.

This is less intrusive than previous versions, but it does mean it'll delay when you can update your phone to the latest version of Android. Which is irritating, especially when you're paying top whack for a new handset.

The Note 7 boasts a powerful 2.3GHz quad-core processor and 4GB of RAM. These combine to ensure that even the most resource-sapping games and videos run without a hitch and apps open in a snap.

But the S7 is no slouch. It too has a 2.3GHz chip and 4GB of RAM, meaning its performance is on a par with the Note 7. But using both phones day to day, there are some noticeable differences between them.

At the time of writing, the Note 7 is available free on contracts starting at £41 per month. The S7 is free from £27 per month.

So neither phone is cheap. But then they are two of the most cutting-edge smartphones around. 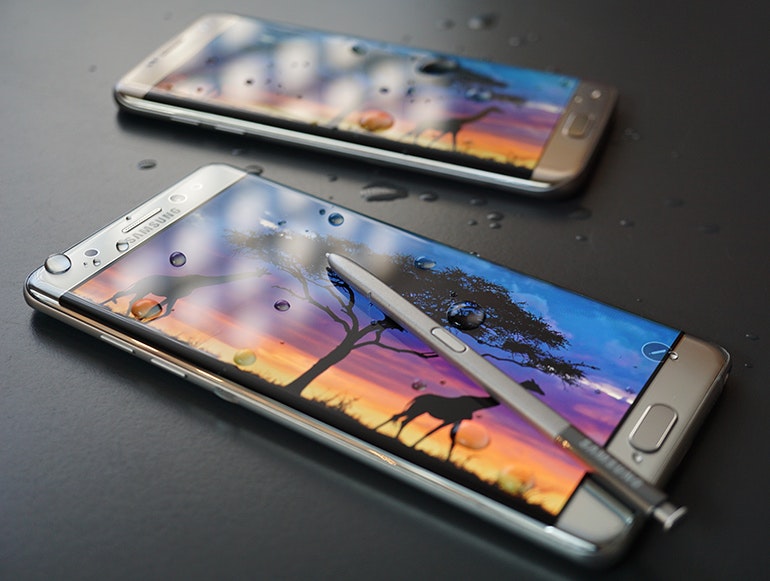 Samsung has been on a roll of late. At the moment, only Apple can rival it when it comes to high-end smartphones.

Improvements it has made across its range include boosting camera quality and making the camera app easier to use. And just as crucially, making its own preloaded apps less annoying.

The S7 was one of the most impressive phones of the year, and can still hold its own against a lot of newer handsets. But next to the Note 7, it suddenly looks a little behind-the-curve.

With a better always-on screen, improved stylus functionality and new – if dubious – iris recognition tech, the Note 7 is our choice of the two.

It won't be to everyone's taste, but if a powerhouse of a mobile with a big screen and stylus is your cup of tea, you can't go wrong. *

It's Apple against Apple, this year's phone up against last year's.

It's the clash of the titans, as Samsung’s best takes on Apple’s finest. But which is right for you?