The world’s most beautiful villages, according to social media

Uswitch has discovered which villages are the most beautiful in the world by assessing their popularity across social media.
Share this guide

Ever romanticised about escaping to the countryside? Living the idyllic, rural lifestyle you have always dreamed of? Surrounded by picturesque landscapes, rolling hillsides and beautiful, rustic villages? Well, for some people, this is now becoming a reality.

A recent report has shown that enquiries to estate agents for village properties have risen by 126% year-on-year. With this in mind, Uswitch mortgages have assessed the two visual-centric social channels, Instagram, and Pinterest, to find out which of the world’s most beautiful villages are the most popular on social media.

The most beautiful villages in the world 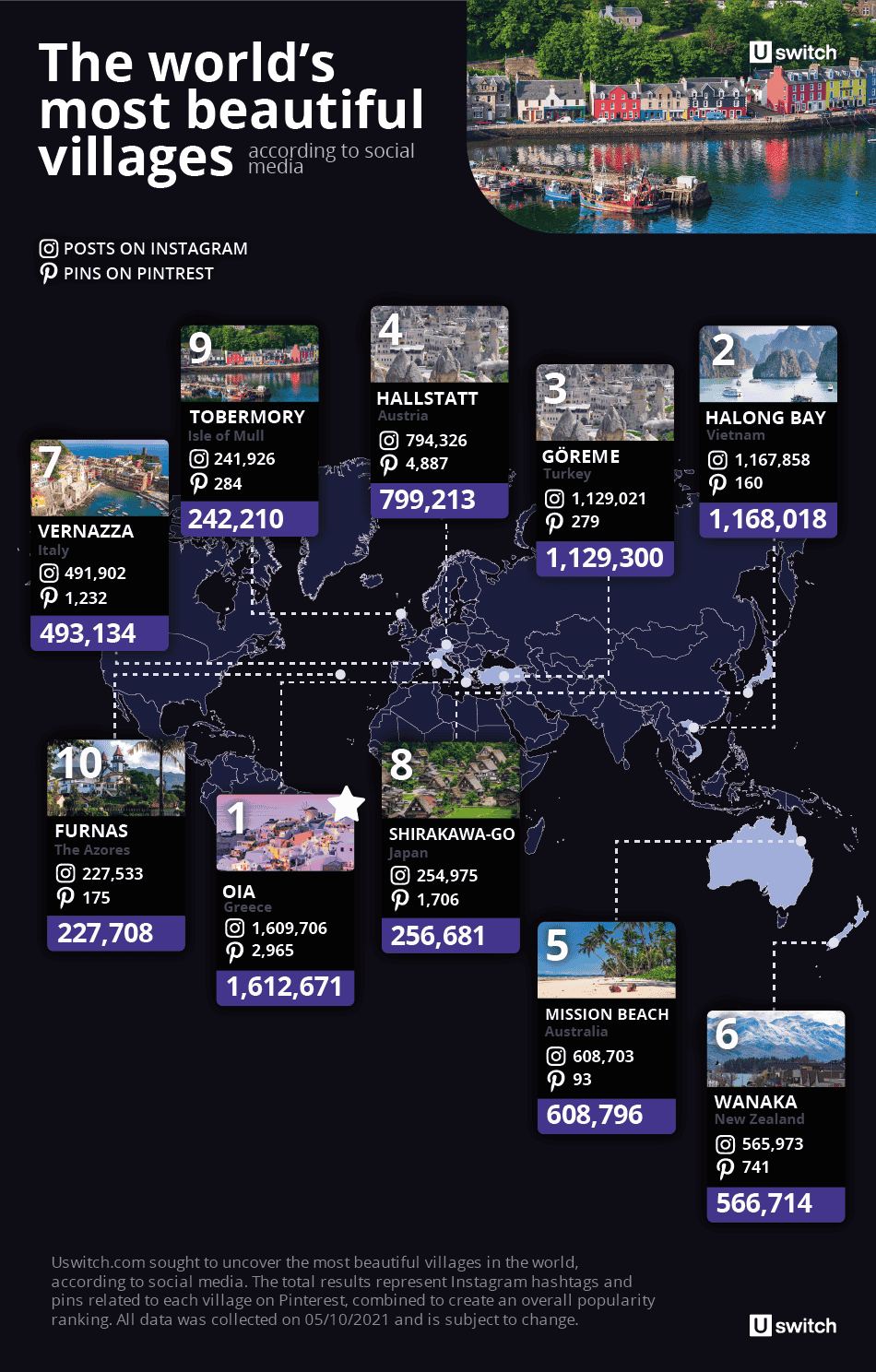 So, you have your bags packed and want to jet-set off to some of the world’s most beautiful settlements. But where do you go?

Europe seems to be the most popular destination with six out of the top 10 destinations situated on the continent. Topping the list is the stunning village of Oia in Greece with just over 1.6 million social media appearances; the vast majority of which are from Instagram posts.

Second and third are very closely contested by Halong Bay in Vietnam and Göreme in Turkey, with just over 1.1 million social media appearances each. A slight drop to just under 800,000 for Hallstatt in Austria takes us to fourth place on the list.

You’d need to catch a flight to the other side of the world for fifth placed Mission Beach in Australia and Wanaka in New Zealand, before flying back to Italy to visit Vernazza in seventh place with just under 500,000 appearances on social media.

The top 10 is completed by the villages of Shirakawa-Go in Japan, Tobermory on the Isle of Mull in Scotland, and Furnas in the Azores (Portugal), all with less than 260,000 social media appearances.

So, if you wanted to visit all of these, you would certainly clock up some air miles, as well as your carbon footprint. So, what about on a continental scale?

The most beautiful villages in Europe 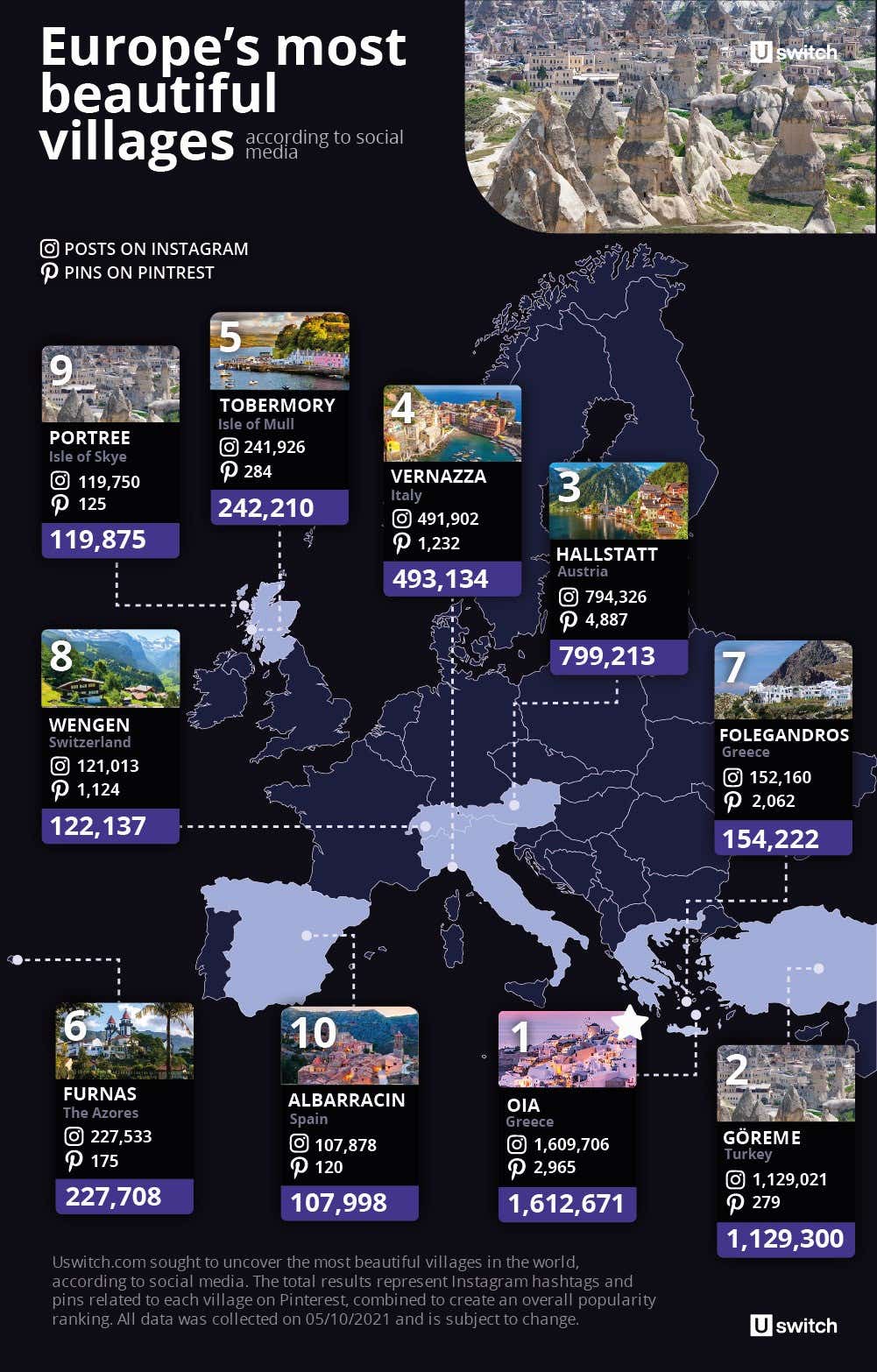 Europe has a multitude of places to offer depending on the type of experience you would like as a tourist. It is perhaps unsurprising to see so many villages located in warmer climates and in coastal areas as this is a major pull factor for tourists the world over.

As already noted, Oia in Greece leads the way and has more social media appearances than the bottom seven villages combined. Built on the slopes of the volcanic island of Santorini, it is clear to see why it is top of the list, with stunning views across the south Aegean Sea and a rich, architectural and religious history.

Similarly, ranked second on the list, Göreme will offer a unique tourist experience. Located within the “fairy chimney” rock formations of Turkey, this magnificent village allows for hot air balloon rides and the opportunity to visit local, artisan markets and impressive churches.

But it very much depends on which type of holiday experience you would like.

The UNESCO World Heritage Site of Hallstatt in Austria has the most Pinterest pins out of the top 10 with 4,887 - almost double that of Oia and Folengandros. But they are unable to push any higher than third in the list, with total Instagram posts of just under 800,000. This would be a great destination for exploring the mountainous landscapes, majestic glaciers, and historic salt mines.

Similarly, in eighth spot is Wengen, with a comparatively low 122,137 social media appearances. But do not let that fool you as, located on a sunny, sheltered terrace below the Bernese Alps, this charming village offers spectacular views across the Lauterbrunnen valley and copious hiking trails that meander through pine forests and wildflower meadows.

Fourth place Vernazza in Italy, with just under 500,000 social media posts, will perhaps offer you a traditional, Mediterranean-style holiday experience with a protected harbour on the north-west side of this historic fishing village and a scattering of local restaurants, churches, and castles.

Or perhaps your desires lie in exploring the beauty that the UK has to offer. Tobermory on the Isle of Mull (242,210 social media appearances) and Portree on the Isle of Skye (119,875 social media appearances) make up fifth and ninth places respectively in the top 10. As the location for the children’s TV show Balamory, Tobermory is the setting for brightly coloured shops and restaurants situated along the pristine, white sands and crystal-clear waters of the North Atlantic Ocean.

Alternatively, slightly further north, and a short boat ride, will take you to Portree on the Isle of Skye, where you can visit a traditional fishing village with a picturesque harbour and pier, surrounded by hills and hiking trails aplenty.

If a unique experience is what you are after, then sixth placed Furnas (227,708 social media appearances) may be your calling. Located on the east of the Azores in the middle of the Atlantic Ocean, this stunning little village is situated within a giant, volcanic crater, making it the setting for geothermal pools, hot springs, and steam holes - a site of peace and serenity.

For seventh place on the list, hop on a flight back to Greece to visit the marvellous village of Folegandros (154,222 social media appearances). This is a locale of incredible, natural beauty and having been relatively untouched by international tourism, it has managed to sustain its unspoiled charm. Made up of traditional, white-washed Cycladic architecture, wild natural landscapes and peaceful atmosphere certainly make it one of the most desirable places to visit within the region.

Completing the list, and perhaps offering one of the most unique experiences, is the iconic village of Albarracin. Do not let the relatively low number of social media appearances deceive you (107.998) because this is a gem! The imposing, fortified perimeter is home to a village that has preserved its Islamic and medieval flavour. Surrounded by red, sandstone boulders and cliffs, this is a location that offers a blend of passive and adventure touristic opportunities.

The most beautiful villages in Asia 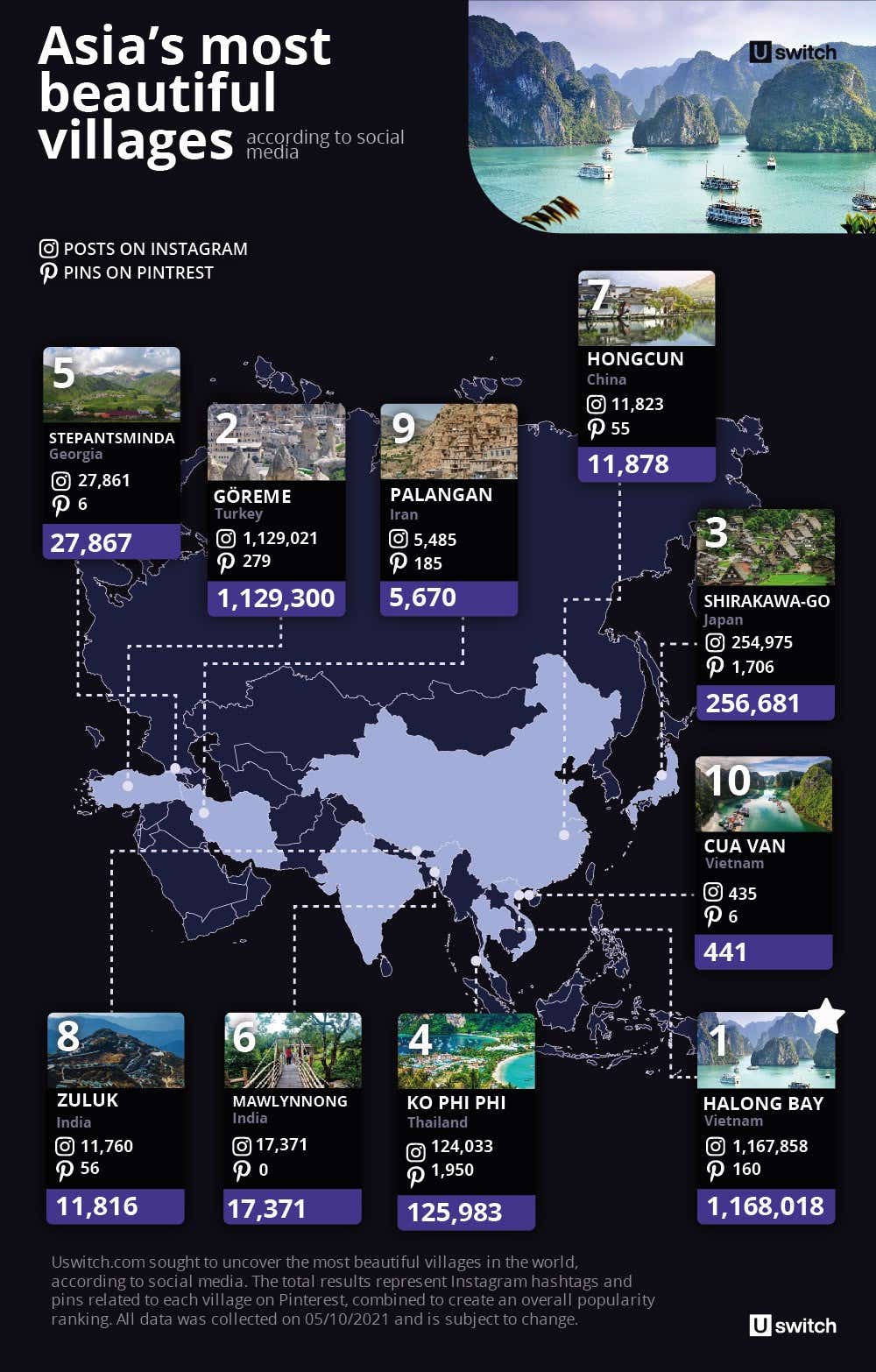 Ha Long Bay in Vietnam is the most beautiful village on this continent. With just over 1.1 million social media appearances, it is easy to see why this tops the list and is Vietnam’s number one tourist hub. Towering pillars of limestone and tiny islets of forest rise from the emerald waters of the Gulf of Tonkin making this a site of ethereal beauty. Göreme in second place transcends the Asian-European border and narrowly misses out on first spot by about 40,000 social media appearances.

Another village located on this geographic, half-way point is fifth place Stepantsminda in Georgia, with 27,867 social media appearances. Located about 5,000m above sea level in the Caucasus Mountains, this village is situated in a valley overlooked by historic churches and the snowy cone of Mount Kazbek.

With around a quarter of a million social media appearances, the remote village of Shirakawa-Go in Japan is home to traditional, thatched farmhouses and is the site of religious temples, shrines, and festivals. In this village, you can expect heavy snowfall in the winter and iconic cherry blossoms in the spring.

Ko Phi Phi is fourth on the list. For film fans out there, you will recognise this as the setting for the 2000 Leonardo Di Caprio movie ‘The Beach’. For those of you who haven’t seen the movie, it is a site of contrasts. Phi-Phi Don is a hedonistic paradise, with bleached beaches and warm, azure seas during the day and a rich party scene in the evening. Ko Phi Phi Leh is, by contrast, an underdeveloped, naturistic haven with stretches of coral reefs in crystal-clear waters overlooked by jagged cliffs.

India has two locations within the top 10. Mawlynnong is sixth on the list with 17,371 (all of which are Instagram posts) and Zuluk in eighth place with 11,816 social media appearances. Advertised as the cleanest village in Asia, Mawlynnong is the site of a community-based, ecotourism programme set within lush greenery and exquisite biodiversity. If you are looking for a soothing experience with a picturesque ambience, look no further.

Located 3000m above sea level on the east of the Himalayan mountains, you will find the tiny village of Zuluk with a population of 700 inhabitants. A former transit point of the historic silk road across Asia, this emerging and offbeat destination will offer majestic views across the rugged, mountainous terrain, plus the opportunity to view some of India’s wildest animals in the dense forests that surround it, such as deer, bear and the red panda.

Asia’s ninth most beautiful village is Palangan, found in the Middle East. Situated on the slopes of the Tangivar valley, this beautifully preserved village is the site of historic, stairway architecture that overlooks the meandering river beneath it. Relatively untouched by tourism, this will offer the opportunity to be at one with nature whilst staying with the local inhabitants.

Rounding off the top 10 most beautiful villages in Asia is in the same country where we started, Vietnam. The deceptively low number of social media appearances (441) does not reflect the unique beauty that this village has to offer. The floating village of Cua Van offers a fully local tourist experience with a community of people whose prevailing culture and way of life is in stark contrast to the more tourist boom of Ha Long Bay. The views are like that of a poetic painting; colourful, traditional houses and primitive characteristics of a fishing village from ancient times.

By and large, European villages tend to rank as ‘more beautiful’ than Asian villages, but as the old adage goes - beauty is in the eye of the beholder.

Compare options for buy to let mortgages to get the best rates and provider options.