Thinking about a new central heating system, or just want more information on the one you have? Read this guide.

Your central heating system plays an important role in your home - keeping you supplied with the heat and hot water that make life so much more comfortable. But what systems are available and how do they work?

What types of central heating systems are available?

Central heating is a way of providing warmth in your home from, as the name suggests, one central source. Central heating systems broadly fall into one of the following types:

How does a wet central heating system work?

With a 'wet system' hot water circulates through a system of pipes that connect to the radiators throughout a house. At the centre of the system, a boiler burns a fuel - or sometimes there is a 'heat exchanger' and this heats the water that feeds the network of pipes. 'Wet systems' are the most popular form of heating system in the UK.

Radiators, despite their name, do not just give off radiant heat, in fact they deliver most of their heat through convection; air warmed by the radiator naturally rises, and cool air falls relative to it, as a result the warmed air circulates and the 'space' in a room is warmed.

The pipework may also be connected to a hot water cylinder (tank), which will provide a supply of hot water for bathing and washing.

What type of fuel is used in a boiler?

New gas (and oil) boilers have to be of around 90% efficiency or higher (an A or B energy efficiency rating) and generally use condensing technology to achieve this. If your boiler is more than fifteen years old, you may want to consider replacing it with a new energy-efficient one.

What is the difference between a combi boiler and a conventional boiler?

As well as taking care of your heating needs, combi boilers provide instant hot water. They have the advantage of freeing up space in a home, because there's no need for a hot water cylinder (tank) like there is with a conventional boiler.

In most cases, heating water instantly is more energy-efficient than 'stored' hot water systems. However, the flow of hot water is slower than if it was coming from a cylinder, so a bath will take longer to run. Some combi boilers can in any case also heat water in a cylinder.

Modern boilers generally no longer have tanks in the loft to 'pressurise' the system through gravity. Instead they are sealed systems, and typically only require manual topping up from the mains water supply when the internal pressure has dropped (usually because of tiny leaks). This is a simple operation that takes a few seconds, and involves opening a valve on a pipe below the boiler.

My home is heated via a district heating system, how does this work?

In some areas, notably Nottingham, a centralised district heating source will deliver hot water via a series of underground pipes to a number of homes simultaneously, removing the need for a domestic boiler. This mains hot water then circulates around the pipes within the home to provide heating and hot water. The attraction of this type of system is its energy efficiency and low carbon footprint, and for the consumer it means lower energy bills.

I've heard that ground source heat pumps are environmentally friendly, but will they lower my energy bills?

A ground source heat pump works on the same principle that fridges and air conditioning systems work on - making one place cooler while making another place warmer - or the other way around. If you consider how warm the back of a fridge gets, while the inside of it gets cold, then you begin to get an idea of how this system works.

Ground source heat pumps, fuelled by electricity, work by making the earth outside a home colder, by running a refrigerant fluid through pipes that are buried in a trench or a borehole, while delivering warmth at the heat exchanger indoors . That heat is transferred to the water running through the pipes inside a house to warm radiators and provide hot water.

Ground source heat pumps typically reach temperatures of around 50°C, which is significantly lower than with a boiler, which can reach a temperature as high 90°C (although it's recommended that you set the temperature lower than this). So, you will need to run a heat pump for longer to achieve the same level of comfort, and it tends to work better with underfloor heating, rather than radiators. Although much more expensive to install, they can be as cheap to run as gas central heating. they are a good option to consider if you live off the gas network.

How does a warm air system work?

Warm air systems were sometimes installed in the sixties and seventies in the UK, but continue to be popular in North America. Air is heated by a boiler, typically fuelled with natural gas, and fed via ducts to rooms around the home . The warm air enters the room via a floor or wall vent.

In commercial buildings, variations on warm air systems are still in widespread use, although they typically also serve as a cooling (air conditioning) system.

In most homes, warm air systems have been replaced with 'wet' systems, which are generally more comfortable and efficient.

How does a storage heating system work?

The principle of a storage heater is that it contains bricks capable of storing large amounts of heat. These are heated overnight using the off-peak electricity on Economy 7 and, on Economy 10 tariffs, during two shorter periods during the day. This heat is then gradually released the following day. 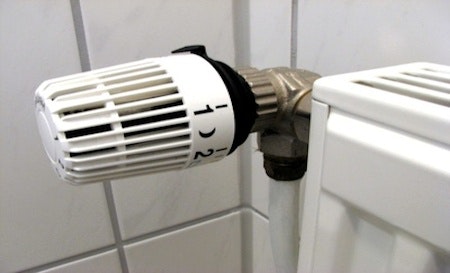 Storage heating systems, although consisting primarily of individual storage heaters, typically rely on a separate wiring system within the home for cheaper off-peak (Economy 7 or Economy 10) electricity, so can still to some extent be described as a 'centralised' system. The same wiring typically will also be used to heat a hot water cistern (tank).

A storage heater normally has at least two controls, one for controlling how much electricity is used, which will determine how much heat is generated for storage, and another for controlling how much heat is released. This means that if you're out during the day, you can delay the release of the heat until you return in the evening. More advanced storage heaters also have thermostatic controls.

Unlike older storage heaters, which took up a lot of space, modern ones use bricks with much greater heat storage capability, and are far more streamlined.

Which of the two should you opt for? We take a quick look at the pros and cons.

In terms of cons, it is worth noting that electric central heating is often more expensive as electricity unit prices are up to four times more costly than gas prices. On top of this, electric central heating storage heaters do not provide instant control. This means you will have to plan your heating needs ahead as switching the heating on at night means it will heat up for the next morning.

The main advantage of gas central heating is that it is cheaper, per unit, than electricity. On top of this, gas boilers are getting more and more efficient. Replacing an old boiler with a new energy efficient one is pretty straightforward in terms of the installation process. You can look into getting a new boiler here.

However, gas central heating is not without its problems. Gas prices continue to rise, and although they remain lower per unit than electricity costs, they are far from cheap. Another problem which faces some homes is that they are not connected to the gas grid. Getting connected can prove lengthy and costly. Gas central heating boilers should also be serviced regularly to ensure they are in good working order.