The Pump to Plug Report

The adoption of electric vehicles (EVs) will play a vital role in meeting ambitious climate change commitments, as it becomes increasingly difficult to ignore the impact that traditional driving is having on the world around us.
Share this guide

The Pump to Plug Report header

A recent report from The International Energy Agency (IEA) predicts a major surge in CO2 emissions from energy this year as the world emerges from the pandemic and its restrictive lockdowns. Even US President Joe Biden is calling on world leaders to rethink their commitments to carbon reduction.

It’s clear that the era of the electric vehicle (EV) can’t come soon enough. But which places around the world are the most ready to embrace the change?

In their new Pump to Plug Report, the energy team at Uswitch have analysed which parts of the world are ready to embrace EVs.

EV range anxiety is the top worry for drivers

Many EV drivers will charge their cars at home, but what happens if you see the low battery light illuminate when you arrive at work?

Earlier this year, our survey revealed almost a third (29.7%) of drivers in the UK worry about the car battery in their electric vehicle going flat while they are away from home and being unable to locate a charging station.

To understand which UK cities are the most prepared to embrace the EV, figures released under a Freedom of Information request revealed that some cities are more prepared than others:

Sheffield topped the table. Each EV charge point in the 41 council-operated car parks would be shared by 40 cars.

Glasgow is next, with 3,756 council-operated car parking spaces sharing 64 chargers. Each charge point would have to serve 59 EVs, which is a charger to car percentage of 1.7%

Completing the top three is Newcastle, where 3,158 parking spaces must share 46 individual chargers. At full car park capacity, 69 cars would have to share each charge point, resulting in a 1.5% charger to car ratio.

The most and least expensive EVs to charge at home

The higher price of electric cars is another significant concern for more than 80% of Brits, but which EV brands cost the most to charge per mile at home?

We wanted to discover how much the 126 most popular models would cost to charge per mile at home.

Taking the UK's average cost per usable capacity charge (18.8p /kWh), this is how much it would cost per mile to use the most popular EV models:

On average, an EV in the UK will cost £0.056 per mile to charge from completely empty to full capacity. For the 10 most expensive models, that rises to 0.078p per mile - 33% more than the average. For the 10 most affordable options, a full charge would cost just 0.047p per mile - 17% less than the overall average.

With the average UK driver travelling 6,500 miles in 2019, this works out as a £201.50 saving for drivers when picking one of the 10 most affordable EVs over one of the higher priced EVs listed in the study.

The EV brands with the priciest charge cost per mile

Next, we grouped the same 126 EV models by manufacturer to determine which brand is the most costly or cost-effective to run per average mile.

Here are the most popular EV brands, ranked by the highest average cost per mile:

The most popular electric car in every US state

Following the news that Washington State plans to ban the sale of fossil fuel-powered cars by 2030, we’ve taken the 126 most popular EV models and used Google Trends to determine the most popular electric car in every US state.

Chevrolet beats Tesla in the overall popularity rankings, with 20 out of 50 states (40%) preferring the all-American Chevy over Elon Musk’s Tesla.

States in the South - such as Florida and Texas - prefer the Chevy Bolt, compared to more Northern territories - such as New Jersey - who are firm fans of the Tesla.

Meanwhile, in the battle of the Teslas, it’s the Model X that tops the list finding favour in states such as Maine and Illinois, overtaking the Model S which proves more popular in California and Idaho.

Which US state has the most EVs using each public charge point?

On average, each state in the US has 10,600 registered electric cars sharing an average of 816 electric vehicle charging stations and almost 2,000 individual charging outlets. That’s around nine cars per charging station.

Below, we’ve highlighted the states where the queues at the EV charging station will be the longest.

The Alternative Fuels Data Centre summarises the incentives and funding opportunities surrounding electric vehicles in the US. We’ve crunched the numbers to reveal the top 20 states encouraging commercial and domestic drivers to switch to EVs. 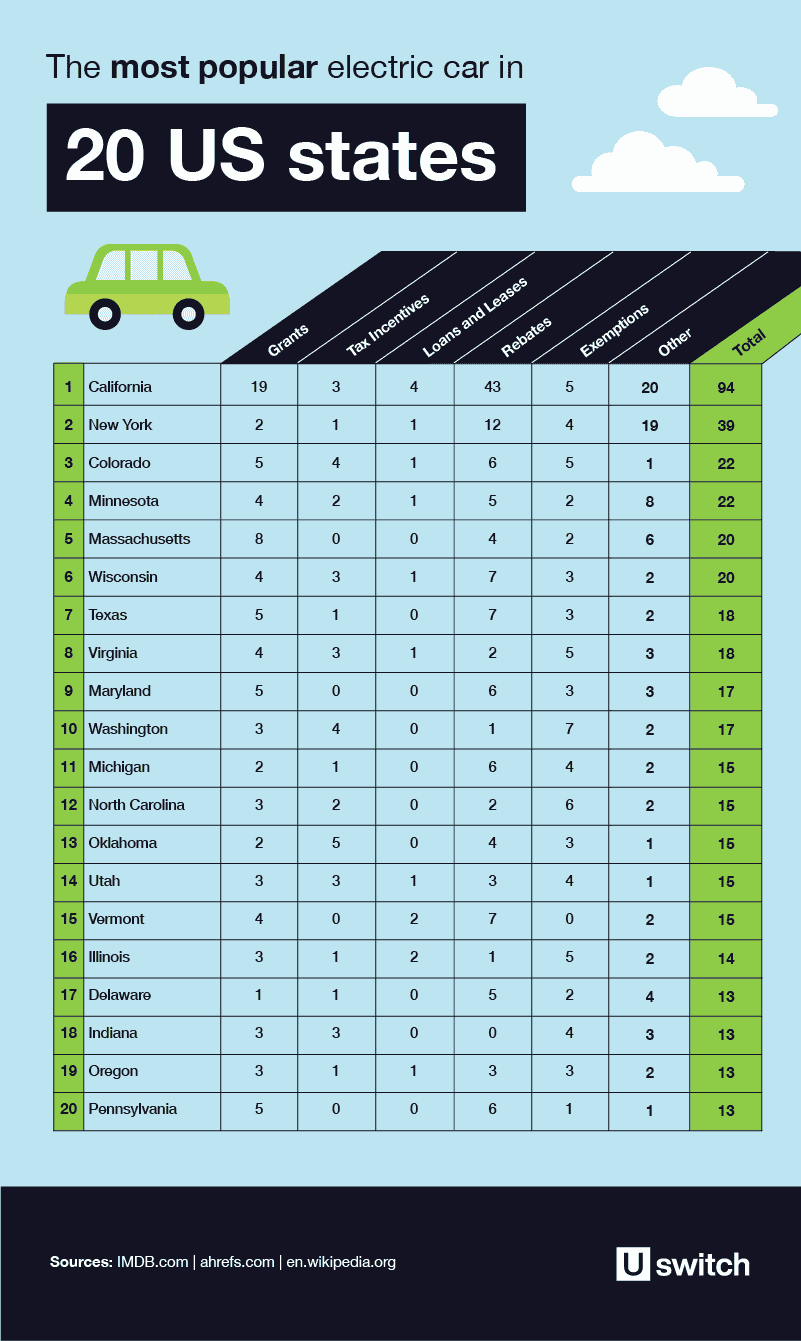 With 94 individual incentives, California tops the list of states with the most support switch. If you live in the Bay Area, you can apply for a grant of up to $2,000 for the purchase and installation of a Level 2 electric vehicle supply equipment, as part of the Clean Cars for All project.

Will Owen, Energy Expert at Uswitch, explains that comparing a number of different EV tariff prices is important in ensuring you get the best deal, especially if you are planning to charge your vehicle at home.

“Recent research from EDF Energy found that electric vehicles could save their owners £41,000 over the course of their lifetime, compared to the cost of owning a petrol car.

“While electric car owners will save on fuel and tax, it’s important to consider the cost of charging. Electric Nation Smart Charging Trial data in 2018 found that 87% of electric car charging is carried out at home using a home charging point.

“As part of the government’s OLEV grant scheme, a home charging point can be installed for £279. In fact, many energy suppliers offer discounted or free chargers with their EV energy tariffs.

“Another saving to consider is the London Congestion Charge and the April 2019 introduction of the Ultra Low Emission Zone (ULEZ). EVs are exempt from paying charges, saving motorists £12.50 each time they drive into the capital.

“Much like the US, there are electric vehicle grants available in the UK too. The grants make EVs more affordable and can deduct 35% off the purchase price, up to a maximum of £3,500.

“The cost of charging your car at home will be included within your electricity bill. Many energy companies in the UK are creating specific tariffs for EV owners, which include a lower off-peak rate, making it more affordable to charge your car at certain times of the day.

“As our research has shown, the cost to charge electric vehicles varies (much like petrol models) and depends on a few factors, including the size of your car’s battery and how  much you pay per unit of electricity. See how the different EV tariffs compare.

Another cost to consider is insurance. Right now, not all car insurers offer EV cover as standard, but you can read our electric car insurance guide to find out more.

Taking a seed list of the world’s best selling electric vehicles models and brands we discovered their battery capacity. Using an average of each electricity provider's peak kWh we calculated how long it would take to charge each vehicle's battery from empty to full.

Please note, the figures above do not include standing charge and were sourced from each individual electricity provider's website, data correct as of 20th April 2021.

Using an average of each electricity provider's peak pricing kWh (18.8p/kWh), the usable capacity and the range for each electric vehicle model (in miles) we calculated the average cost per mile.

*Car models marked with * are either concept vehicles, yet to be released, or their usable battery capacity and range has been estimated based on vehicles with a similar specification. All values included within this table have been obtained via https://ev-database.uk

*Car manufacturers marked with a * include data from vehicles that are yet to be released, or from vehicles where their usable battery capacity and range has been estimated based on vehicles with a similar specification. All values included within this table have been obtained via https://ev-database.uk

Please note: Average energy consumption and range are based on moderate drive style and climate. The actual range will depend on speed, style of driving, weather and route conditions

The most popular EV in every US state

Taking the most popular EV models in the US, we determined the current popularity of each model in every state in the US, using Google Trends. The higher the search interest, the more popular the car is in each state.

US states with the highest number of EV charging points

Using data from the AFDC, we charted:

EV Incentives in the US

State by state publicly available incentives to increase electric vehicle usage, ordered by the state with the most (CA):

Using data obtained via Freedom of Information request between January 2021 and April 2021, we have determined which council-owned and operated car parks have the highest ratio of electric vehicle charge points to the number of spaces, to determine which UK city is the most prepared for the EV revolution.