Uswitch has analysed the own-brand vegan ranges from eight different supermarkets to reveal which have the most choice.
Share this guide

More people around the world are making the switch to a plant-based diet as a way to not only cut down on meat consumption but also as a way to help the planet. And with UK supermarkets responding to this with their own vegan ranges, we wanted to see how they stack up against one another.

With Veganuary 2021 seeing its biggest sign up yet (500,000 people), supermarket giants across the UK are branching out with their own vegan ranges, in a bid to ensure all shoppers are catered for - whatever their dietary requirements.

Retail experts predict that UK supermarkets will make an estimated £658 million from the sale of vegan products this year, but with so much competition, which brand is going to give you the best choice to pop in your basket? With this in mind, Uswitch has analysed the own-brand vegan ranges from eight different supermarkets to reveal which have the most on offer for plant-based shoppers.

The price of vegan products can be a significant factor when considering switching to a plant-based diet, however new research shows that vegans on average spend 40% less on food than those that eat meat.

So we set out to discover which of the biggest supermarkets have the most affordable offerings for their vegan customers.

Taking each of the UK’s supermarkets vegan ranges from their online website, this is how much it would cost to buy products from each of their ranges: 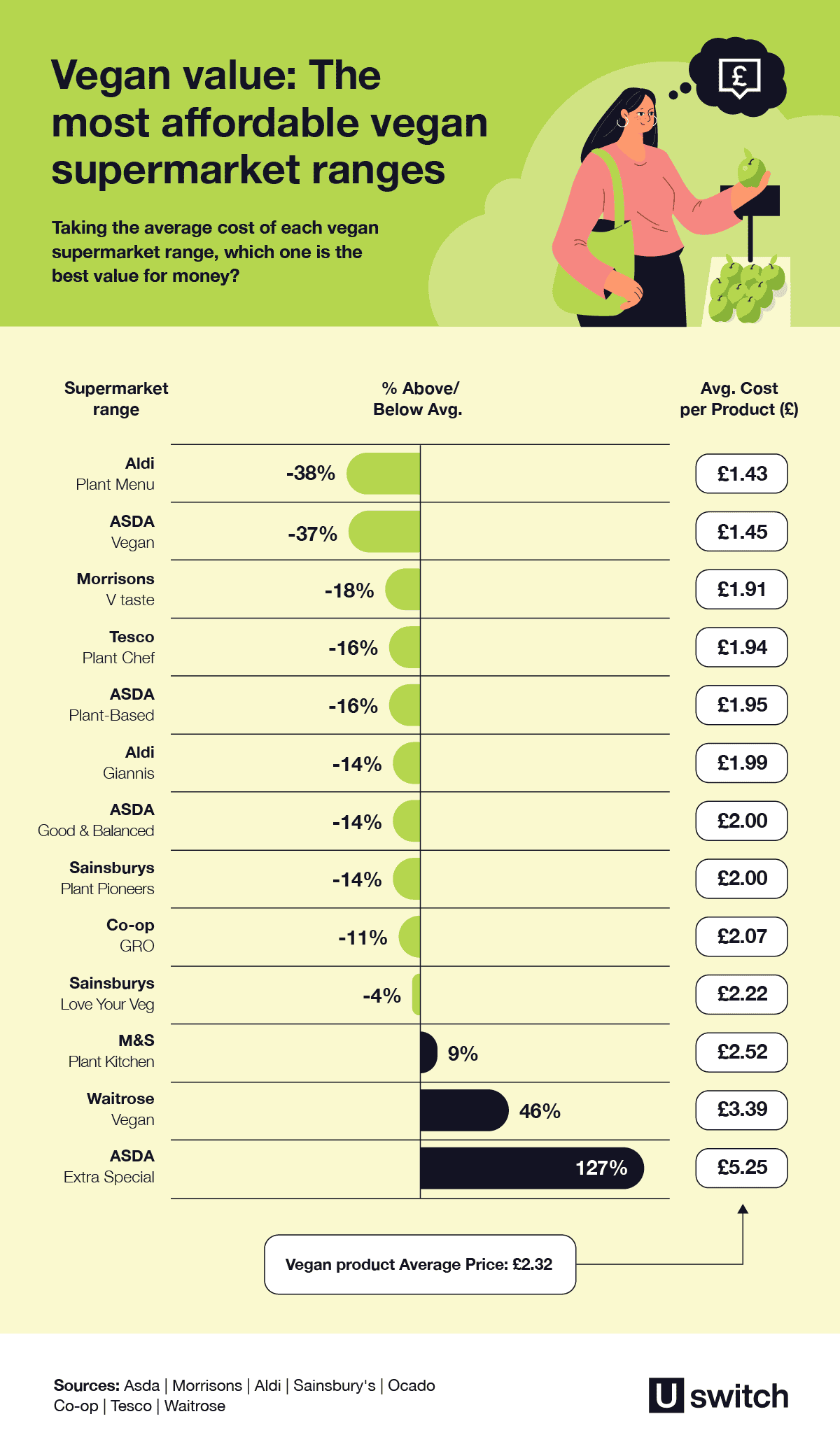 Topping the list with the best value for money vegan range was Aldi’s Plant Menu. The supermarket giant is known for its bargain deals and had an average cost of just £1.43 per vegan product.

Having relaunched its vegan menu back in 2019, Aldi’s Plant Menu has gone from strength to strength in the last few years with its most recent addition - inspired by KFC and Nandos - flying off the shelf ahead of BBQ season.

Asda’s Asda Vegan range took second place on the index for the cheapest vegan range, costing an average of just £1.45 for its products.

Completing the top three was Morrisons V Taste, whose range costs an average of £1.91 for its vegan products.

Next, we wanted to find out which supermarket ranges have the best food on offer by using their online grocery websites to discover how many items in their range they had available.

Here are each brand’s vegan ranges; ranked by the highest number of items available: 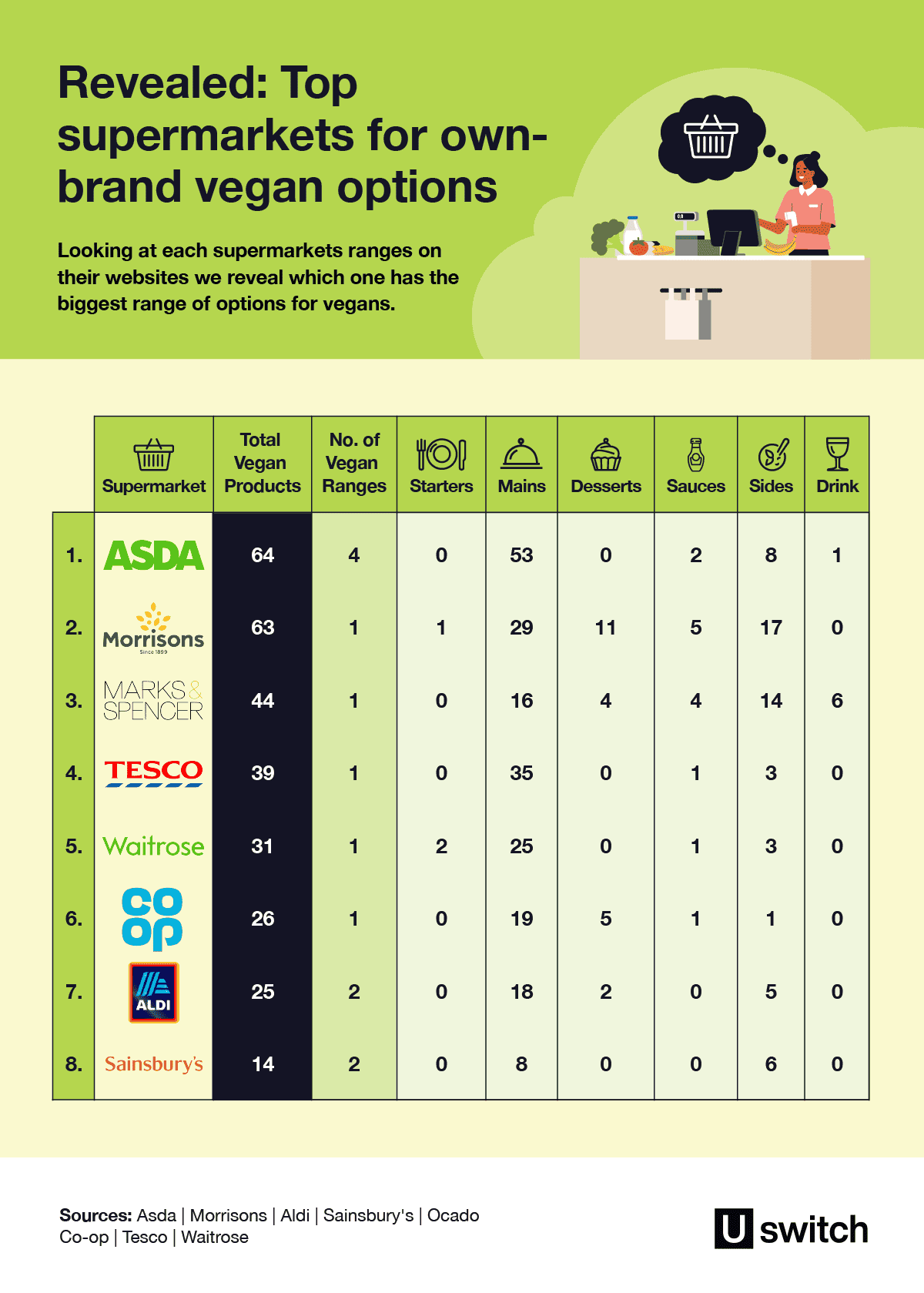 Coming highest out of eight supermarkets on the list was ASDA. The chain has 64 items available across its own-brand ranges including Vegan Steak and Ale Pie, Veggie Tikka Masala and No-Zarrella Sticks.

The top spot comes as no shock for the supermarket as it has recently been named ‘retailer of the year’ at the 2021 Free From Food Awards thanks to its heavy investment into free-from and vegan products over the last year.

Narrowly missing out on the top spot with 63 products available on its online grocery hub was Morrisons. Taking second place, the supermarket chain launched its own-brand vegan range in 2018 to compete with the UK’s other big supermarkets that were also investing heavily in plant-based products.

Morrisons made headlines back in 2020 as the first own-brand vegan range to release products including vegan ‘pork’ pies and mozzarella sticks.

Supermarkets that ranked towards the bottom of the list for choice were Aldi and Sainsbury’s. Despite topping the list as the cheapest supermarket brand for vegan products, Aldi fell short when it came to its choice of products, with just 25 items available on their grocery site.

The most affordable meat substitutes

Despite supermarkets like the Co-op recently slashing prices on their vegan burgers and sausages to help close the gap on costly vegan products, finding meat substitute products that are affordable can still be a challenge.

With this in mind, researchers at Uswitch have looked at the cost of meat substitute products and revealed which ones are the most affordable.

These are the top 10 most affordable meat substitutes on the high street:

Protein-packed vegan meals: which supermarket packs the most protein?

Everyone is aware that protein is important for a balanced diet, and luckily there are plenty of vegan products including beans, pulses and vegetables that will give you the right amount of protein.

Delving into the nutritional value of each supermarket’s vegan range, we reveal which products pack in the most protein below:

Protein packed products: Which supermarkets pack the most punch? table.

ASDA came next on the list, with three products also ranking in the top 10 including Meat-Free Mince and Shawarma Chicken Style Pieces that all had over 20g of protein per 100g in their products.

Other supermarkets that also made the top 10 were the Co-op, Morrisons and Waitrose whose meat style products all had over 19g of protein.

Vegan meals with the least salt per serving

For decades health advisors have said that too much salt in your diet may be the cause of several health problems, but with a lack of convincing evidence to suggest this, how much is too much?

As part of their vegan supermarket research, Uswitch has looked into products across each of the supermarket's vegan brands and discovered which ones contain the least amount of salt.

Vegan mains with the least salt per serving table.

Tesco’s Mushroom Spaghetti Bolognese came out on top with just 0.1g of salt per 100g serving, making it the main meal with the lowest salt content in the index.

Asda’s Good and Balanced Chilli came next on the list with just 0.15g of salt per serving.

Ranked: Which supermarket has the best sweet treats for vegans?

Are you a lover of all things sweet? Then you will be pleased to know that there are a few supermarkets out there offering your favourite desserts on their grocery sites as you know and love them but vegan!

Below, we rank which supermarkets offer the best treats for those with a sweet tooth and how much they cost: 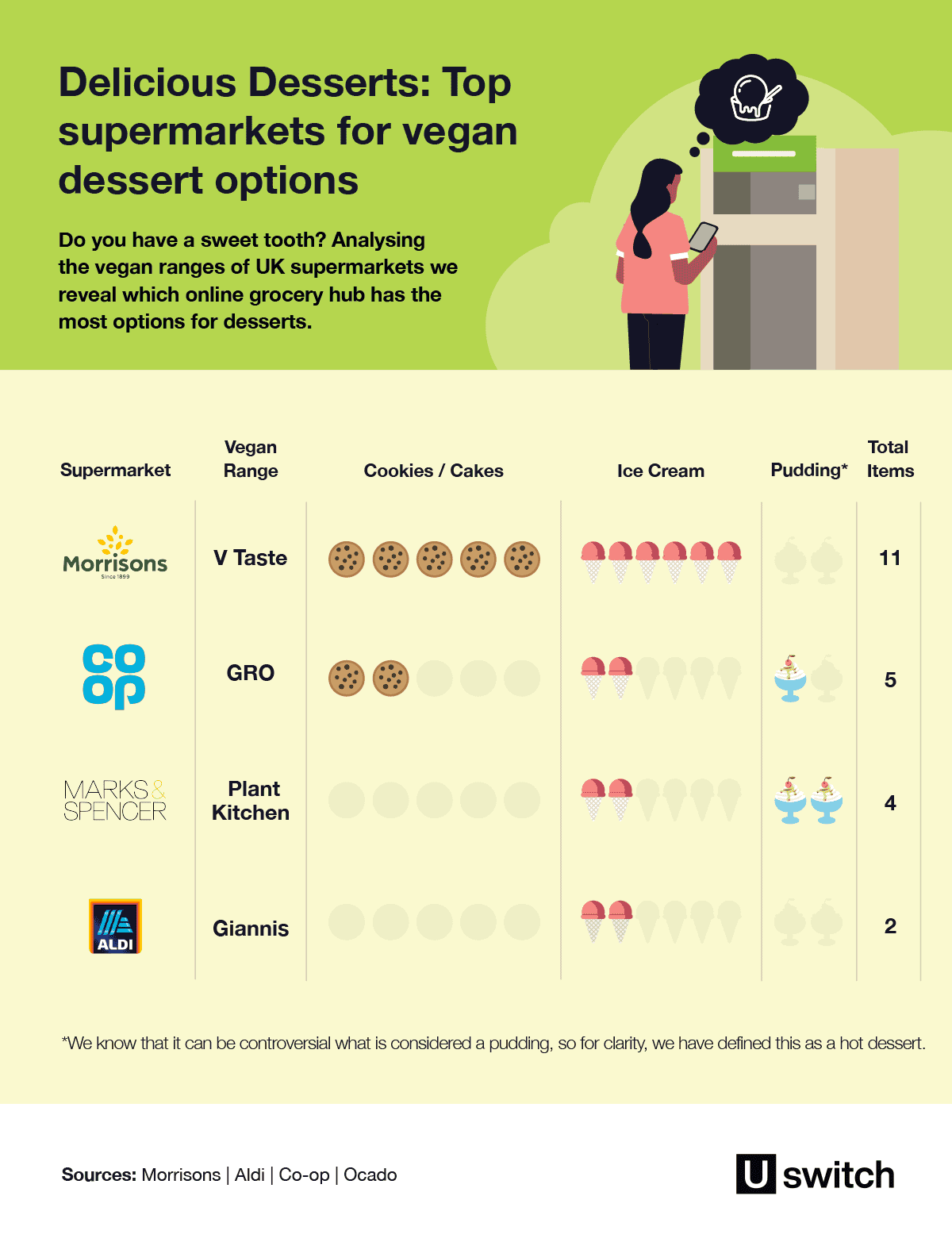 Marks and Spencer, known for its expensive and often luxury items, took third place on the list. The beloved supermarket has a total of four options available for sweet treats among its vegan range.

In a bid to launch more vegan products since Veganaury, the supermarket has gone hard by adding a number of new products to its range. While the sweet treats might not be available via online delivery you can get your hands on their new vegan Strawberry Cheesecake Wedges and Chocolate Chip Cookies in stores.

Most customers love the bakery section in Marks and Spencer and, with a new vegan version available for their favourite cookies, many will be flocking to grab a few while they are fresh.

“In the last few years, it’s become more common for people to eat meat-free for a few days a week in a bid to be more sustainable and healthier, and supermarkets are responding to this by expanding their vegan ranges.

"And while vegetarian brands such as Quorn have helped bring meat-free produce to the masses, switching to a fully plant-based diet can be seen as more challenging because of a supposed lack of choice.

“However, with supermarkets recognising the demand for an affordable vegan range, it might make Brits more likely to part in Veganuary 2022, which could save 4.87 billion kgs of CO2 (4,870 tonnes) alone.

“Our vegan supermarket index will be particularly helpful for those that are considering the switch to a plant-based diet at an affordable price while also providing information on where you can get the biggest choice and range of products to suit your needs.”

If you're looking to be more green at home, compare green energy deals.

Using the online grocery shopping platforms for the following supermarkets we have discovered which supermarket has the most option for vegan shoppers: Aldi | ASDA | Co-op | M&S | Morrissons | Sainsbury’s | Tesco | Waitrose (Lidl was unavailable to view online)

All data correct based on the online grocery hubs as of 25th May 2021.

Unless otherwise stated, all nutritional values are per 100g cooked.