Want to secure the best offer on broadband this Black Friday? Here's how to find the right Black Friday or Cyber Monday broadband deal for your household.
Share this guide

The Black Friday and Cyber Monday period is the best time of year to get some great deals on electronics and other Christmas gifts.

And recently, internet providers have started using the event to offer their own Black Friday and Cyber Monday broadband deals too. But with so many offers, it can be hard to figure out which ones are the best.

Find out how to grab the best Cyber Monday broadband deal for you and your household.

What do you want to know?

Here's how you can get a great Cyber Monday broadband deal this year.

How to get a good Cyber Monday broadband deal

If your broadband contract is ending soon, Black Friday and Cyber Monday could be a great chance to switch to a new broadband package. And if you're currently out of contract on your current service, you could make some serious savings on your monthly bills this November.

As in previous years, broadband deals will be available at heavily discounted prices over the Black Friday/Cyber Monday weekend, meaning you could get a high-speed, high-quality service for a much more affordable price, saving you money throughout the year.

So if you're free to shop around for a Black Friday broadband deal this year, here's what you need to do.

Decide what broadband speed you need

If you bought any new electronics this Black Friday, it’s a good idea to also think about what broadband speeds you might need to support them. With new devices being used in your home, maybe you need to increase your data allowance or speeds — but by how much?

You might not need a premium, high-speed package if you’re just checking emails and Facebook. But if you’re planning on getting a Netflix, Apple TV Plus or Disney Plus subscription to get you through the colder months, you might want to opt for a faster fibre broadband package to ensure uninterrupted streaming.

Are you looking to buy a new TV on sale? Look for broadband and digital TV bundles so you can make the most of your new TV and the content you watch on it. And remember, if it’s a smart TV that connects to Wi-Fi, it will now also be using your data and broadband too.

Don’t be too tempted by freebies

Providers often sweeten their Black Friday broadband deals with complimentary gifts and vouchers. And while these are great, you need to make sure you read the fine print first before you sign.

Be sure to check out how long introductory discounts actually last, too. Are they only good for a few months or do they last the entire contract? A free 4K TV may not actually be that great a deal if you end up paying more than you need to for the whole contract.

What’s the cost of the full contract?

Speaking of your contract, consider the cost of the full thing, not just the monthly rate. On our Uswitch deals tables, you can press the ‘Price details’ button to find the total cost of your contract and compare that to other deals.

Are you able to switch broadband today?

Finally, make sure you check your current contract — if you’re still in one — to see if you’ll be free to switch during the Black Friday/Cyber Monday period. If you’re halfway through your contract, you’ll be charged early termination fees to leave, and a Black Friday saving likely won’t make up for the money you’ll have to pay to exit your existing agreement.

But if you’re out of contract, or your contract is ending in November or December this year, you should be able to switch to a discounted Black Friday deal free of charge. That’s not including any setup fees you might have to pay to install your next broadband connection, though.

Just keep in mind you'll need to notify your provider that you want to switch roughly 30 days in advance, whether you’re in or out of contract.

Which providers have Cyber Monday 2022 deals?

A lot of Black Friday broadband deals are only available for a few days, with most running until the end of Cyber Monday. You could grab a Black Friday 2022 deal from one of these broadband providers, and based on their deals from 2021, you could end up saving a lot.

Virgin Media has already discounted the monthly price of two of its broadband and TV bundles this November.

People looking to get in early on a Black Friday broadband & TV deal have the choice between Virgin Media's Bigger Bundle + Phone package or its top-of-the-range Ultimate Volt TV bundle, which also includes an O2 SIM card with unlimited data.

BT has added Black Friday promotions to its two most-popular broadband deals and three of its broadband and TV bundles this November.

Not only will you get the first six months of your 24-month contract for half price if you choose a BT Black Friday offer, but four of the five selected deals also come with a sizeable £110 virtual reward card to spend at your leisure.

If you're an avid TV or sports watcher, you could also take advantage of these limited-time promotions, with either BT's Entertainment, Sport or Big Sport – which includes Sky Sports channels.

Sky has unveiled its Black Friday broadband deals for 2022, with lower monthly prices and a £75-100 gift card on a selection of broadband-only plans and broadband and TV bundles.

Its TV bundles include the latest Sky TV box, Sky Stream, which lets you watch all the Sky TV you subscribe to without the need for a satellite, and a free basic Netflix subscription too.

As for which broadband speed might suit you, 59Mbps will be plenty of internet speed for most homes, but for households with lots of 'power-users', with downloads and 4K games on all the time, its Ultrafast 145Mb or Ultrafast 500Mb deals would be better (if your property can access them).

Low-price internet provider Plusnet has slashed the monthly price of its Wi-Fi deals and is offering a £50 reward card with some of its offers for Black Friday 2022.

You can choose from its superfast fibre packages, which 97% of the country can get, or opt for its faster full fibre deals if they are available in your area. Speeds range from 36Mb at just £21.99 per month for 18 months, all the way to 145Mbps - which is more than double the UK's average internet speed - at just £27.99 per month. 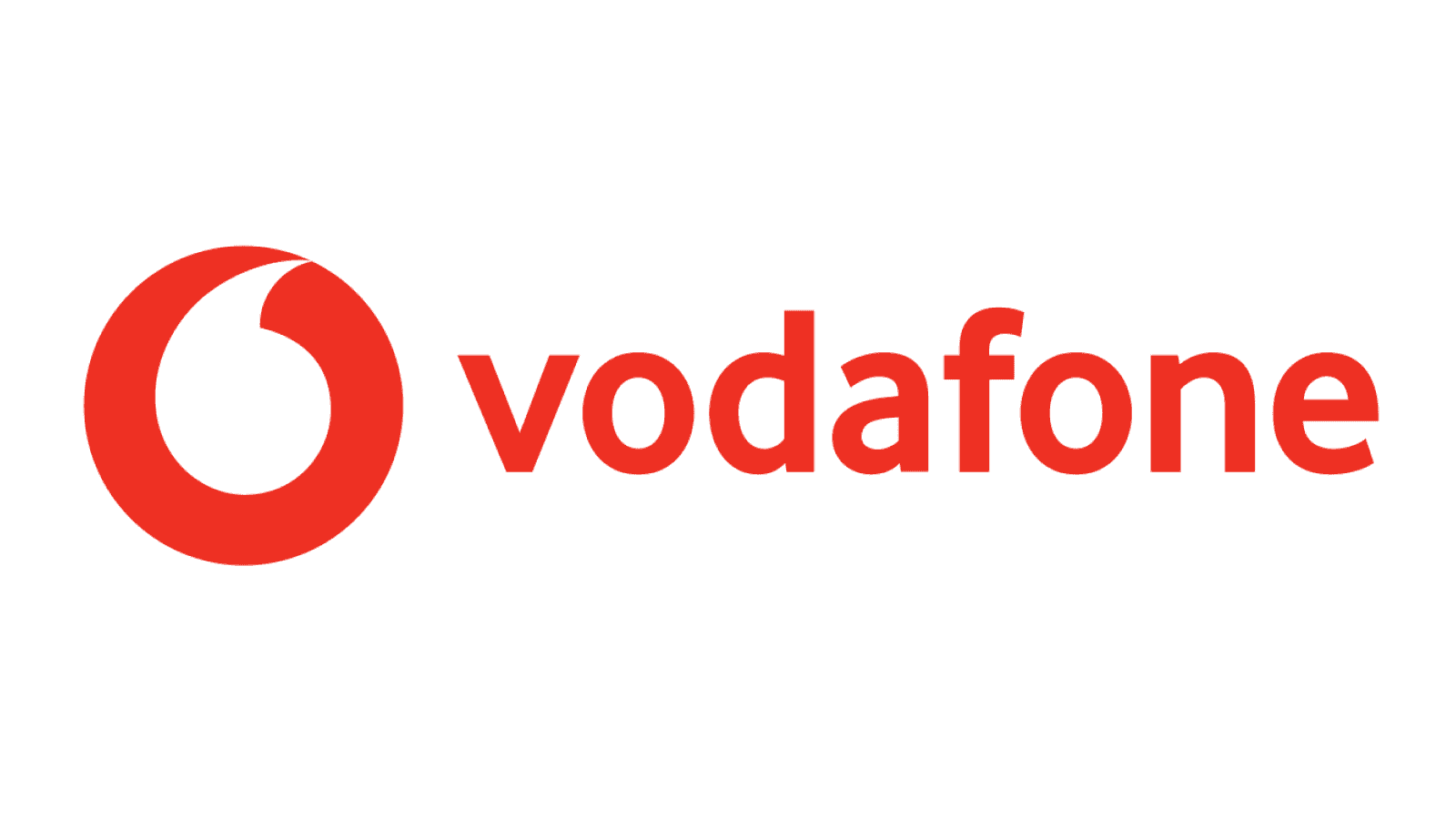 Vodafone's impressive fibre broadband packages are going for as little as £21 a month with a £100 gift card included, while its full fibre 100Mb package is just £24 a month when you buy this Black Friday.

TalkTalk is highlighting its full fibre deals this Black Friday, with a big price decrease and a generous gift card applied to its ultrafast broadband packages.

Customers can choose between 152Mb, 525Mb and 944Mb broadband speeds, and each speed option comes with a more valuable gift card of £100, £125 or £150. So if you choose a TalkTalk full fibre deal this Black Friday, you could add a sizeable boost to your Christmas budget.

Check and see if you can get one TalkTalk's Black Friday deals where you live and take advantage of some great Black Friday savings.

Hyperoptic is offering some of the cheapest Black Friday broadband deals where it's available. A simple 30Mbp Fibre Broadband deal costs as little as £13 a month (with no set-up fee) when you sign up during Black Friday.

Check out Hyperoptic Black Friday deals and see if you could get 150Mb full fibre broadband for less than £20 a month!

NOW is offering superfast broadband deals for just £20 a month this Black Friday. And with NOW TV memberships, you could get access to a wide range of Sky’s premium content, without the expensive bills that come with it.

What is Black Friday?

Since the early 20th Century, this day has come to signal the beginning of the Christmas shopping season for a few reasons. In America, Thanksgiving is a major holiday with televised parades — usually sponsored by department stores — to celebrate the holiday.

At the end of most parades, Santa Claus makes an appearance, which inevitably makes people start thinking about Christmas and shopping. This is convenient because students and the majority of non-retail employees have both Thursday and Friday off of work, giving most people a four-day weekend — perfect for shopping.

Why is it called Black Friday?

Black Friday is one of the biggest, busiest shopping days of the year. Because of the increase in spending, there’s a popular theory that the day gets its name from older accounting systems which wrote losses in red ink and profits in black.

The uptick in sales on this day drives enough profits to move stores out of the red and into the black — but this is just a theory. In reality, no one knows exactly where the name came from.

One thing is clear, though: Black Friday is here to stay.

What is Cyber Monday?

While many people still go shopping on Black Friday, retailers noticed an interesting shift in the early 2000s. In 2003 and 2004, online sales for retailers — particularly clothing stores — spiked on the following Monday.

This could be due to people who were too busy with family or travelling over the Thanksgiving weekend to get any shopping done, or maybe people needed backup gifts after missing out on limited-time Black Friday deals in store. Or maybe employees returning to work after a long weekend wanted to carry on shopping rather than focusing on work again.

Online retailers quickly took advantage of this trend and coined a new term and event in 2005: Cyber Monday.

Are there Christmas broadband deals?

You will be able to switch broadband during the Christmas period, but it’s not usually the best time to get a discounted Wi-Fi package. Broadband deals are often a little cheaper during Black Friday and Cyber Monday than in the actual Christmas period.

So if you’re eligible to switch at the end of November 2022, it’d make sense to look for a new internet deal then, rather than wait until the festive period in late December. You’ll likely find a better offer during Black Friday and Cyber Monday. 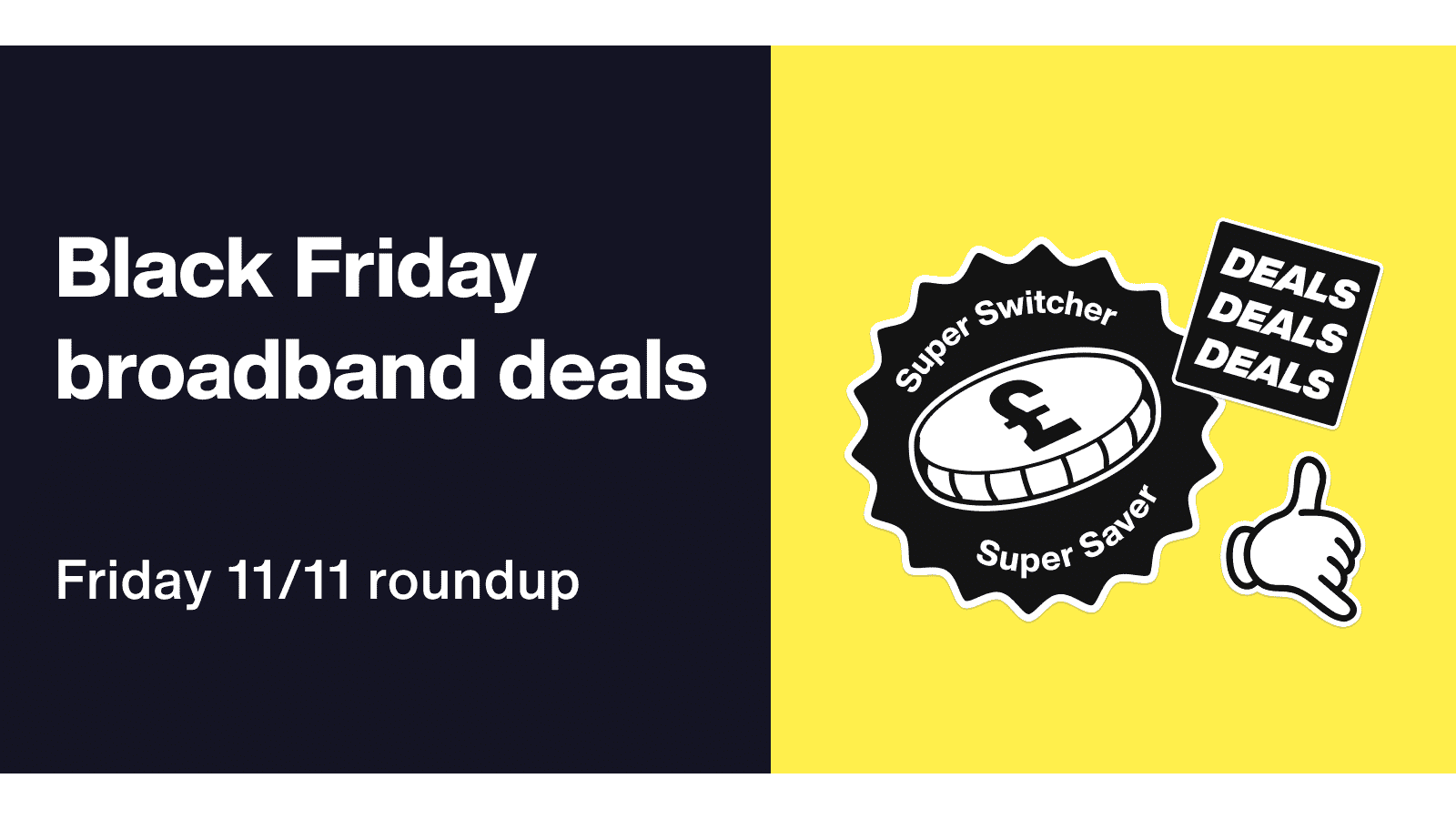 With Virgin Media, Community Fibre and Gigaclear all launching early Black Friday deals, you can get your hands on a cheaper Black Friday offer two weeks before the big day. 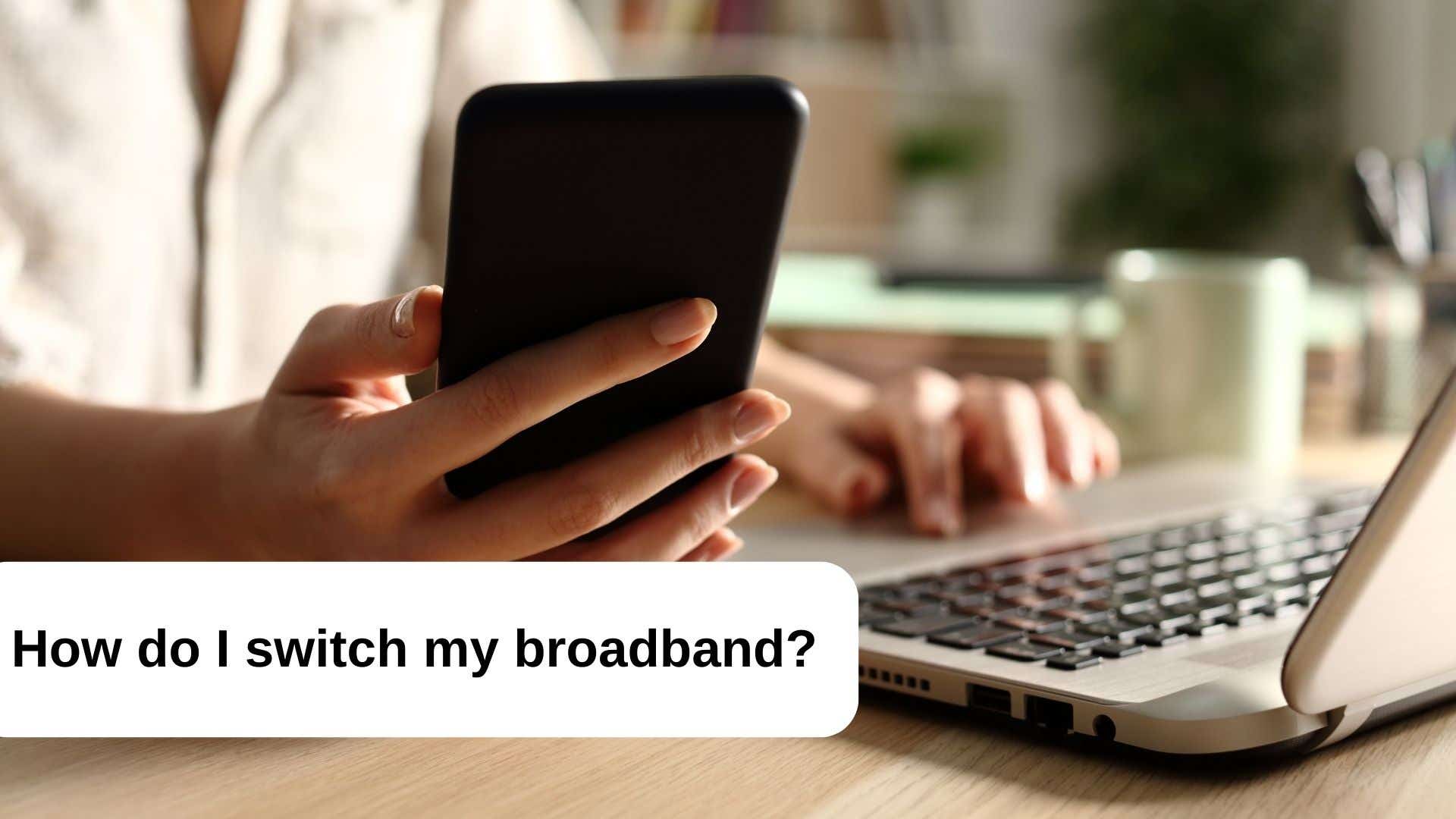 How to switch broadband | A guide to changing your provider

Looking to switch your broadband service? Here's how to do it all, from finding the broadband speed you need to choosing the right provider for you. 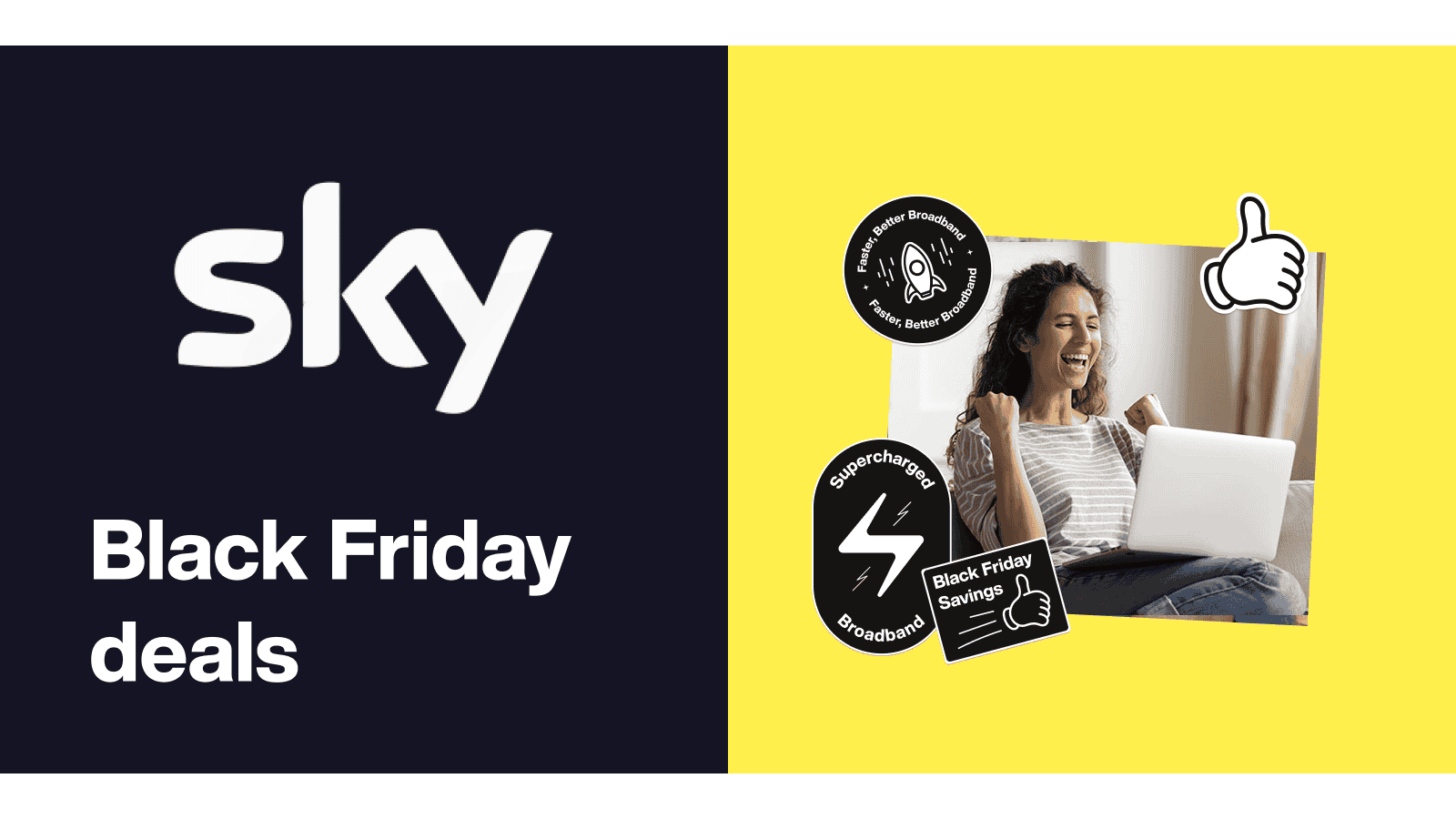 Sky has launched its Black Friday deals for broadband-only and broadband and TV bundles. Get heavy discounts and vouchers on Black Friday 2022 offers from Sky.