Where in the world can you travel the furthest for your money in an EV compared to a petrol car?
Share this guide

EV Value: Where can you travel the furthest for your money in an electric vehicle compared to a petrol-powered counterpart?

As the motoring industry continues its shift away from a reliance on the internal combustion engine to stand alone electric motors, the electric vehicles (EVs) themselves are rapidly increasing in quality.

Despite the fact that batteries in most EVs will still not take you as far on one charge as a tank of petrol, they do have the advantage of being much cheaper to recharge than the cost of filling up a tank of fuel. Therefore in every major country in the world, you are able to travel much further for your money in an EV than a petrol equivalent.

But where is this distance most pronounced? We decided to take a look.

To discover how far you can travel for £50 on both types of power sources, we chose two similar-sized comparable cars. The Nissan Leaf E+ and the Volkswagen Golf, both are mid-sized hatchbacks. Despite the Golf having an average range of 575.2 miles when full up, which is 336.2 more than the Leaf, it is a lot cheaper for electricity than petrol in these OECD countries. 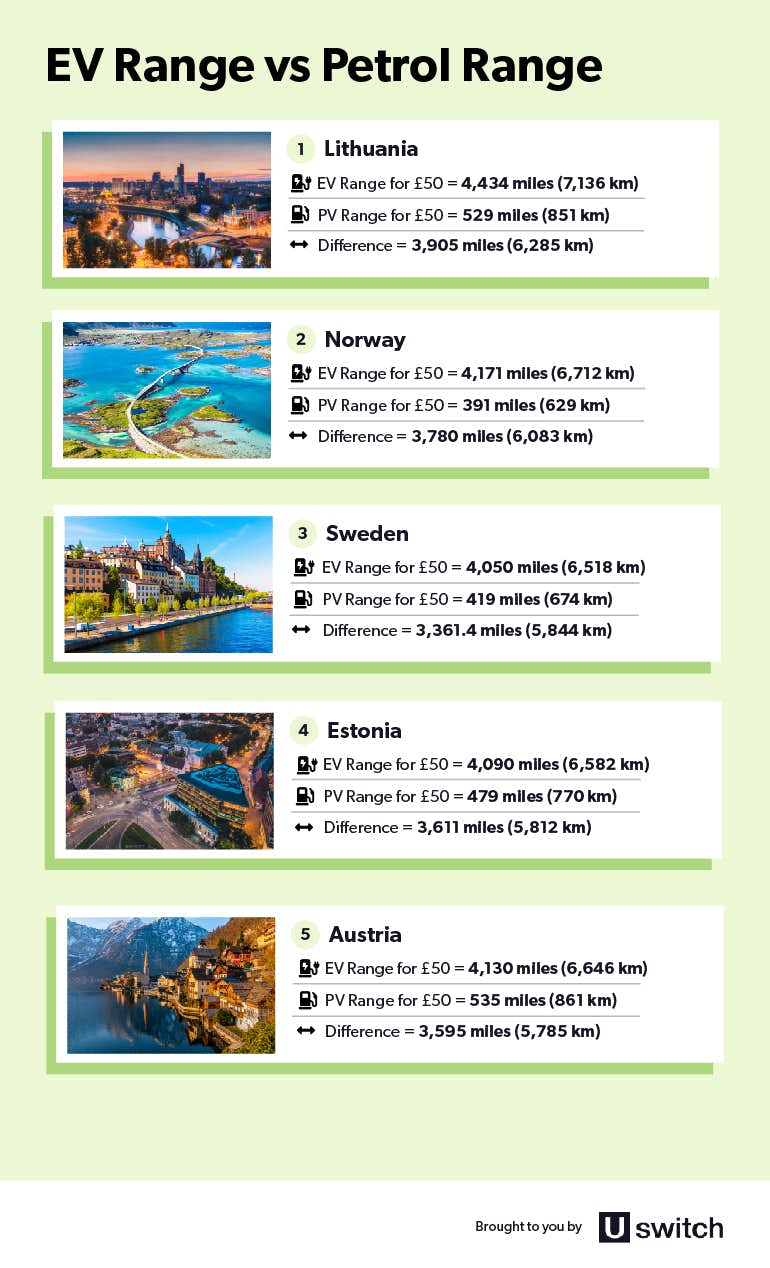 The small Baltic state of Lithuania is the country where it is the best value per mile to run an electric car compared to a comparable petrol model. Lithuanians will be able to travel more than 4,400 miles in a Nissan Leaf for £50 worth of electricity, this is almost 4,000 miles more than how far they’d be able to drive in a Volkswagen Golf for the same amount of money.

Norway is the second-best value nation for running an EV compared to the VW Golf, in the Scandinavian state you can travel 391 miles for £50 in the Golf. This distance pales in comparison to the whopping 4,171 miles that Norwegian citizens will be able to drive in the Nissan Leaf, this equates to a distance of just under 3,780 miles.

Sweden borders Norway, and the two Scandinavian countries are also situated next to each other in these rankings. The distance from Stockholm and Oslo is 522 miles, which means for £50 you could drive between the two nations' capitals almost eight times in the Nissan Leaf. This is far greater than the Golf which couldn’t even make the trip once on a £50 fill up.

With Estonia ranking as the fourth-best nation for running an EV compared to a petrol vehicle, it means that three of the top four nations are occupied by Baltic states. Ancient Estonian Pagans were some of the last Europeans to adopt Christianity after the 1200s Livonian Crusade, but it seems they are one of the first places to adopt EV usage. Estonians can travel more than 3,600 miles further in a Nissan Leaf than in a Golf when they spend £50.

The fifth best-value country in the world for running a Leaf compared to a Golf is Austria. This Alpine central European nation’s electricity costs allow you to travel almost 4,130 miles for £50 worth of electricity in a Leaf, analogously you can only travel 535 miles in the Golf. This means that there is a difference in the range of 5,785 in Austria between the EV and petrol vehicle when spending the same amount of money.

Countries with the best value range for electric vehicles 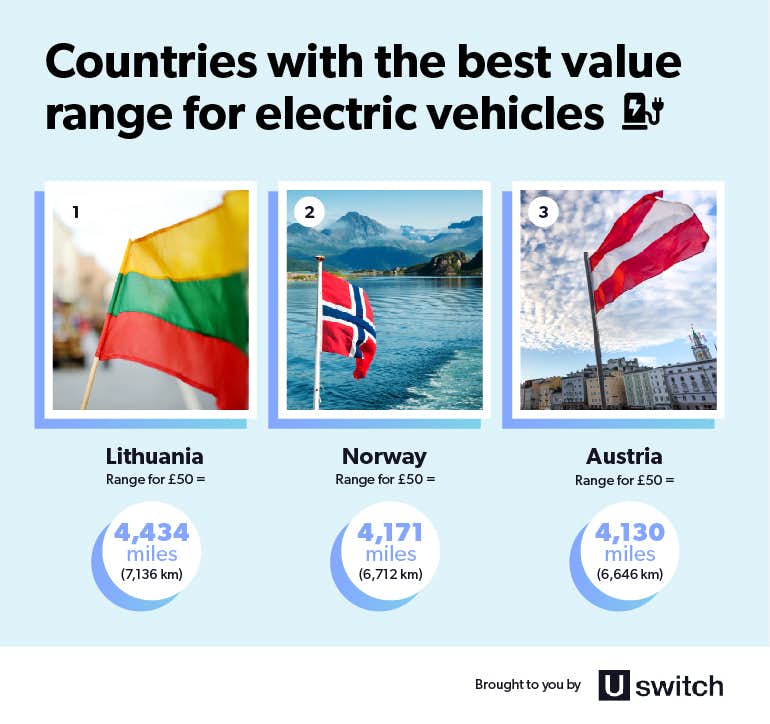 Not only does Lithuania have the biggest difference between the range of an EV and a petrol vehicle, but it is also the country where you can travel the furthest for £50 in a Nissan Leaf. You can travel 4,434 miles for that price, which means Lithuanians could travel from the easternmost point of the country to the farthest point west almost ten times.

Norway again comes second in the rankings, thanks to the 4,171 miles that drivers can travel in the Nissan Leaf for £50. You can fully charge the Leaf 17.45 times for this amount in electricity costs, and as the car has a 239-mile range the £50 range is vast.

Although Austria only had the fifth-biggest difference between EV range for £50 and petrol range, it has the third-highest overall EV range. It only costs Austrians around £3 of electricity to fully charge a Leaf, so they can travel 4,130 miles for £50.

Countries with the best value range for petrol vehicles 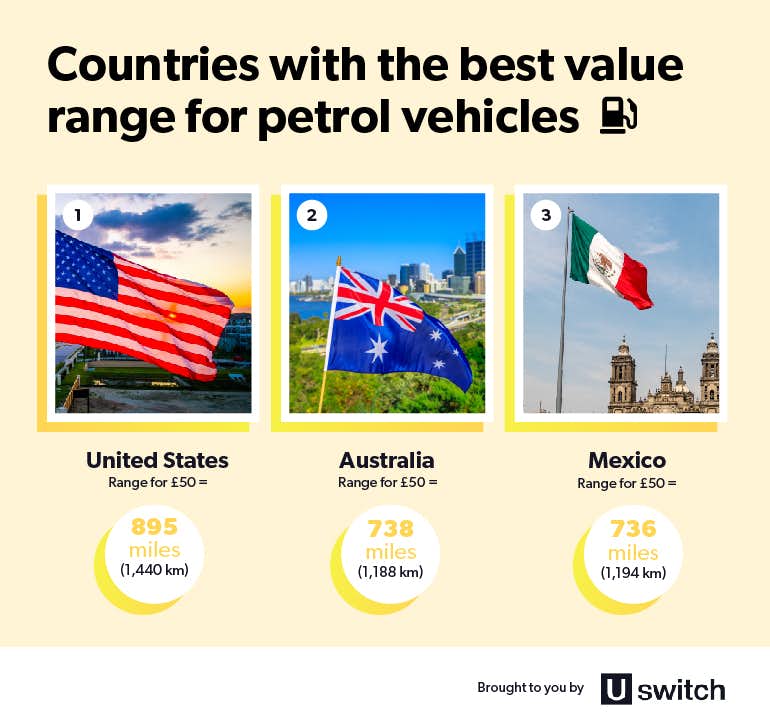 The USA is the OECD country with the best value for petrol-powered vehicles. In the States, £50 will take a VW Golf 895 miles on average, which is massive compared to some other countries. This is due to low fuel costs as the average petrol price is just £0.64 a litre.

In Australia it costs 12 pence more per litre on average compared to the USA, this means that Aussies can travel 738 miles in a VW Golf for £50. But as Australia is so big, this still wouldn’t be enough to get you from Sydney to Brisbane.

The country with the third-highest range for £50 in the VW Golf is Mexico, Mexicans can travel 736 miles on average, which is slightly less than Australia but still very far compared to the rest of the nations in the ranking.

“As the motor industry tries to move away from petrol and diesel, this study shows how economical running an electric car really is.

“Electric vehicles are much cheaper to recharge than the cost of filling up your tank, so even though they won’t take you as far as a petrol car, owning an EV could make better sense for your finances - especially for city-centre driving, where you can even escape road tolls in many cases.

“It will be interesting to see how the adoption of EVs progresses as more drivers wise up to the savings that can be made. It’s not just the fuel costs – electric cars are currently exempt from vehicle tax, and some councils have savings schemes in place.

“When it comes to insuring an EV, there is a common misconception that it can be a pricey part of ownership. However, as more motorists opt for an EV and repair costs fall, the insurance market will correct itself and we should see prices drop too.”