The environment is on everyone’s mind nowadays, and consumers are taking things into their own hands by switching away from petrol and diesel cars. But which country is most accommodating to this new crop of eco-conscious drivers? Uswitch wanted to find out.
Share this guide 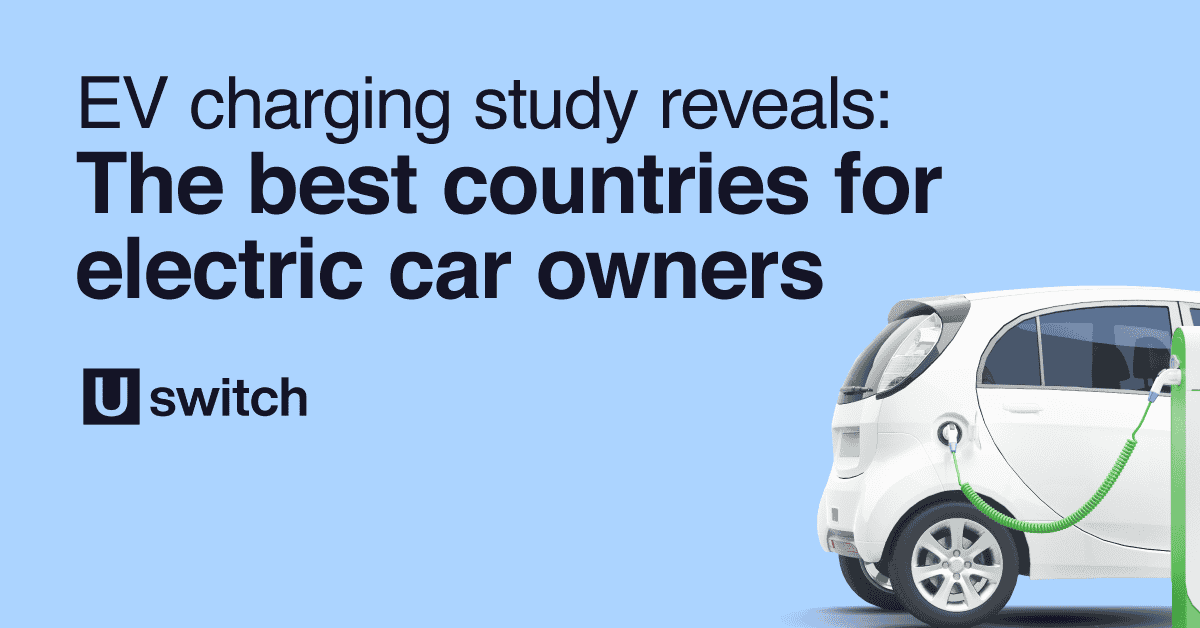 Interest in electric vehicles (EVs) is surging worldwide, with a record 52% of drivers wanting to make the switch away from petrol and diesel. It's not hard to see why. EV adoption is a focal point of many countries' energy efficiency plans and consumers understandably want to play their part.

Still, there are long-held concerns about affordability and EV charging infrastructure that is stalling progress in some regions, holding consumers back from biting the green bullet.

But who's been doing it right? We compiled data on the ratio of speedy electric charging points, the price of recharging the country's most popular model and EV charging station capacity per square kilometre and per capita to calculate an index score and ranking table for 34 European countries. The higher the score, the luckier the EV owner.

Which countries are the best for electric car owners? 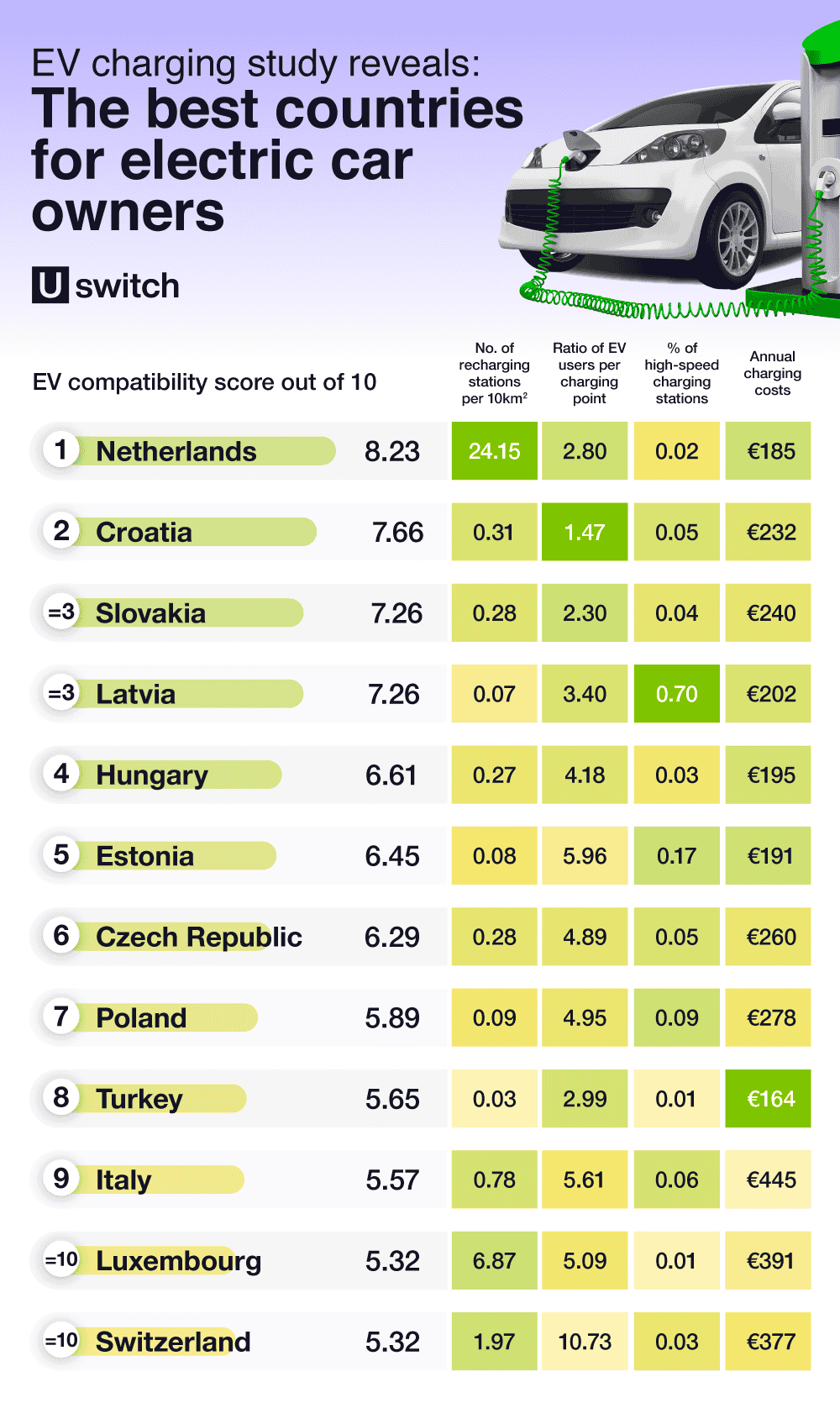 Beating out the traditional regional EV market leaders Norway and Sweden are our friends in orange, the Netherlands.

Its top-ranking position is no fluke: the Netherlands has one of the most robust EV promotion policies in Europe, complete with a target of making all new vehicles sold zero emissions by 2030 and extremely generous buying incentives for consumers, including subsidies and tax incentives. This is even more impressive when you consider that it already has a whopping 24.1 charging stations per 10km2, trouncing any other country on this list by a considerable margin.

In addition, it has the third-lowest average yearly charging price on the continent. It’s gone to great lengths to become a true haven for EV owners and show no signs of letting up any time soon!

Another underdog rising to the top, Croatia hasn't even cracked the top 20 in terms of domestic EV market share yet. Nonetheless, it is the second-best place in Europe to own an electric vehicle!

Croatia has 531 EV charging stations dotted up and down its (incredibly scenic) coast to service a relatively small population of just over 4 million, albeit one with a growing appetite for electric cars. Back in 2020, the online application round for electric vehicle subsidies - which had an initial budget of 2.9 million euros - exceeded demand in just two minutes. In total, the fund received 546 applications and agreed to distribute 5.8 million euros. It's not hard to see why!

Similarly, Latvia began experiencing a sudden spike in EV sales in the midst of the pandemic Perhaps our friends in Latvia caught on to the news about their country's outstanding value for money, which makes for some of the most eye-popping data in our index.

Want to know how many low-speed EV charging stations there are in Latvia? None. Not a single one. An incredible 69.6% of all electric charging points there are high-speed, more than any other country. Even better: all this incredible capacity comes at an average annual cost of just €202.17, making it the sixth cheapest country in our index.

With the seventh-lowest annual charging price in Europe and 1,367 recharging stations for just over 3,000 battery electric vehicles, it's no wonder the Slovak population are starting to catch on to the opportunities their country provides for EV owners.

After some difficulty garnering support despite generous government subsidies for electric car purchases, Slovaks bought a record amount of EVs in 2021, despite a decrease in overall car sales. We can confirm that their faith is not misplaced, as Slovakia is yet another member of our top five club.

Hungary is an EV market on the rise, and it shows, as it claims fifth place in the best European countries for EV owners. This is not all that surprising, considering we found Budapest to be the fourth best city for EV charging stations! The Hungarian Energy and Public Utility Regulatory Authority (MEKH) reports that last year alone, the country saw a 33.6% growth in the number of publicly available EV charging points.

This miniature infrastructure boom is undoubtedly designed to accommodate its fast-growing EV market, where 1 out of every 20 of cars sold is an electric or hybrid vehicle. According to our data, Hungary's total number of charging points stands at 2,541 and provides the fifth-cheapest price for recharging its most popular model.

If there's one thing Estonia is known for in the electric vehicle space, it's innovation. In addition to housing off-beat manufacturers like retro EV specialist Nobe, the country launched the world's first nationwide EV charging network, a process that has since been repeated with Enefit Volt, its largest public fast-charging network implemented in 2021.

As a result of all this forward thinking, it’s been able to provide 17.3% fast-charging capacity - the third highest on the continent - with impressive coverage at an annual average price of just €190.79 for its most popular model.

Czech Republic is managing to cater extremely well for its fairly large number of BEVs - 10,713 to be exact. However, it's evident that the country has plans to make EVs an even bigger part of its future, with plans to build 3,000 new electric charging points by 2025.

This would more than double its present infrastructure, drive much higher rates of EV adoption among its sizable population and surely send it sky-rocketing into our top five. For now, it's sitting pretty at a still impressive seventh place.

Poland is the first of two countries on this list with plans to launch its very own make of electric car - the much-anticipated Izara, set to be produced by ElectroMobility Poland. Poland's biggest asset in the data is the speed of its electric car charging points. With 8.5% of its AC capacity being fast-charging, Poland is the sixth highest performing country on this particular metric.

To keep up with a consumer demand for EVs that is outpacing the European average by a considerable margin, Poland will undoubtedly need to expand its infrastructure even further...especially after landing itself in our top ten.

EV sales are spiking hard in Turkey right now, with the Automotive Distributors Association (ODD) reporting an astounding 243.9% increase in January-March 2022 compared to the same period last year. Why? It's probably because owning an electric car in Turkey is very, very cheap. It is by far the least expensive country for recharging its most popular model in our index, with an average annual cost of just €164.49.

The Turkish government is another player dipping its toes into the EV manufacturing pool with the Togg national car and, like Poland, it will also need to expand their infrastructure in order to maintain its primo position as one of the best European countries for EV owners.

In terms of land mass, Italy is a pretty small country, but it has a lot of infrastructure to support EVs. Italy has the fourth most total EV charging stations on the continent and a relatively high adoption rate to match.

It is constantly looking for ways to upgrade its infrastructure to support the future of domestic EV adoption, such as providing EV charging points at its network of toll stations and, more impressively, the world's first EV-charging highway. You heard that right. A road that charges your car when you drive on it. We don't see Italy relinquishing its spot as one of the best places to be an EV owner anytime soon.

Which countries are the worst to own an electric car in? 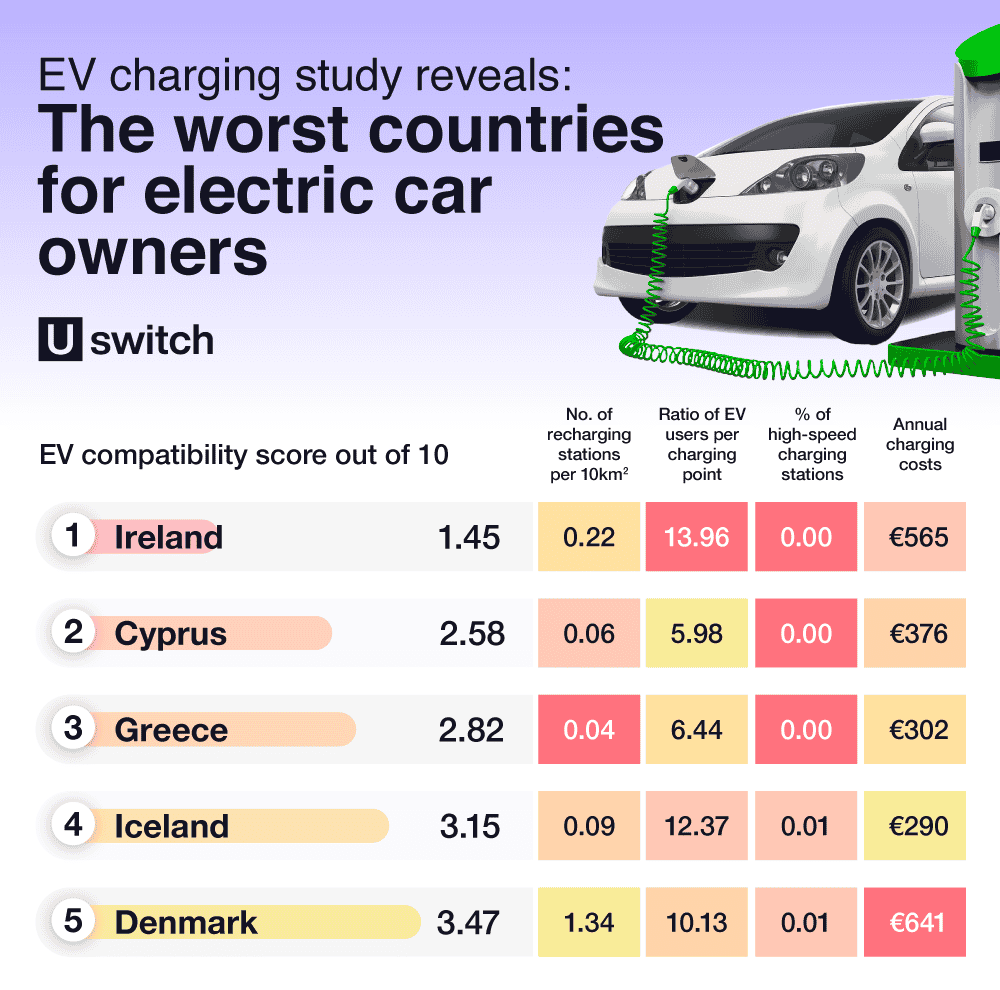 The Irish are a nation of storytellers, but unfortunately their EV statistics aren’t currently spinning a tale of success. The country has a relatively high adoption rate but doesn't yet have the infrastructure to support the public demand, with a ratio of 13.96 BEVs against the total number of charging points. Indeed, 80% of electric vehicle charging happens at home and this is expected to remain the case for the foreseeable future.

The government is planning "significant expansion" in the number of publicly available electric charging points after 2025 in order to meet their ambitious target of having one million EVs on the road by 2030, but for now, being an EV owner in Ireland is a matter of personal responsibility.

The second smallest country in our index, Cyprus slides into second-from-last place with just 57 available electric car charging points. Granted, there are only 341 BEVs currently registered in Cyprus, but its score also takes a hit on account of its number of fast AC charging points - there aren't any.

The cost is also relatively expensive given the lack of speed, with an average annual cost of €376.46 for the most popular model. There are plans, however, to add 40 new EV charging stations by the end of the year.

Greece clocks in at third from bottom with the third-lowest recharging station density per 10km2 - just 0.03%. It is also, like Cyprus, somewhat starved for fast-charging capacity, with just one such station across more than 131,000 km2 of land mass. The country's National Plan for E-mobility, outlined in June 2020, set targets of 1,000 further EV charging stations being installed within two to three years, and a further 10,000 in the medium term. At least fourteen of the initial 1,000 are expected to be fast-charging.

The world leader in green energy production per capita, Iceland is currently struggling to make the same headway in EV infrastructure and cost. The country has one of the highest EV adoption rates per capita in the world, likely owing to its eco-conscious population, but there are just 904 charging stations for these car owners, only one of which is fast-charging.

Although it has no bearing on our index, it's perhaps worth noting that the majority of these stations also appear to be located in the capital Reykjavik, putting those further afield at some disadvantage.

Another green energy innovator to land in the bottom set of this particular index is Denmark. The densely populated Scandinavian country has more BEVs registered than it has square kilometres of land (58,249 BEVs to 42,925km2) but like others at the bottom of our index, is somewhat lacking in infrastructure, with a BEV to electric charging points ratio of 10.1. More striking though is the cost of charging Denmark's favoured Volkswagen ID.4 EV, which at a sky-high  €640.83 is by far the highest in Europe.

Things to consider before buying an electric car

Did you know that if all cars were electric, carbon emissions in the UK alone would drop by 12%?

If you're thinking about becoming an EV owner, EV charging expert Ben Gallizzi offers some pointers:

1. Uswitch.com sought to determine the best country for electric vehicle (EV) drivers. To do this, they created a points-based index which evaluated factors related to the quality and costs of each country’s charging infrastructure.

2. Utilising data from the European Commission’s ‘Alternative Fuels Observatory’, the following factors were determined for the available countries (Lichtenstein was excluded from the study due to insufficient data):

·  Recharging stations per 10km2 – calculated from total number of recharging points in 2021 and country area size.

·  Recharging stations per EV – comparing the number of EVs that share each charging point.

3. Finally, an index score out of ten was calculated to rank each country synthesising the variables above. All factors considered for the index were weighted equally.