Road trips are a staple in Hollywood films. But almost always, the characters are seen in a regular diesel or petrol car which would emit a fair amount of CO2. Uswitch found out how these emissions could be reduced if they switch to an electric vehicle instead.
Share this guide 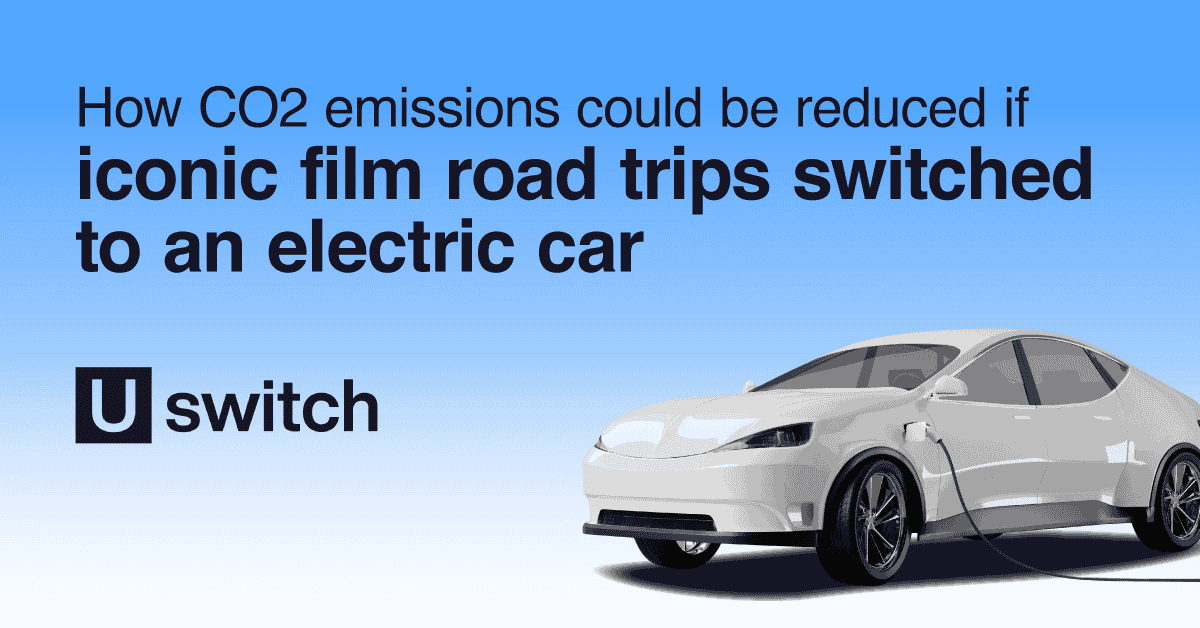 It’s no secret, Hollywood loves a road trip. From Thelma And Louise to National Lampoon’s Vacation, films and TV shows that take us on an adventure are almost always successful.

But with these trips using regular fuel-operated cars, it’s interesting to think of how much CO2 could have been saved if they made the switch to an electric vehicle (EV). EV charging experts at Uswitch, found out by looking at journey distance and travel time as well as refuelling time, EV charging station density and cost.

Which iconic film road trips could reduce CO2 emissions the most by switching to an electric car? 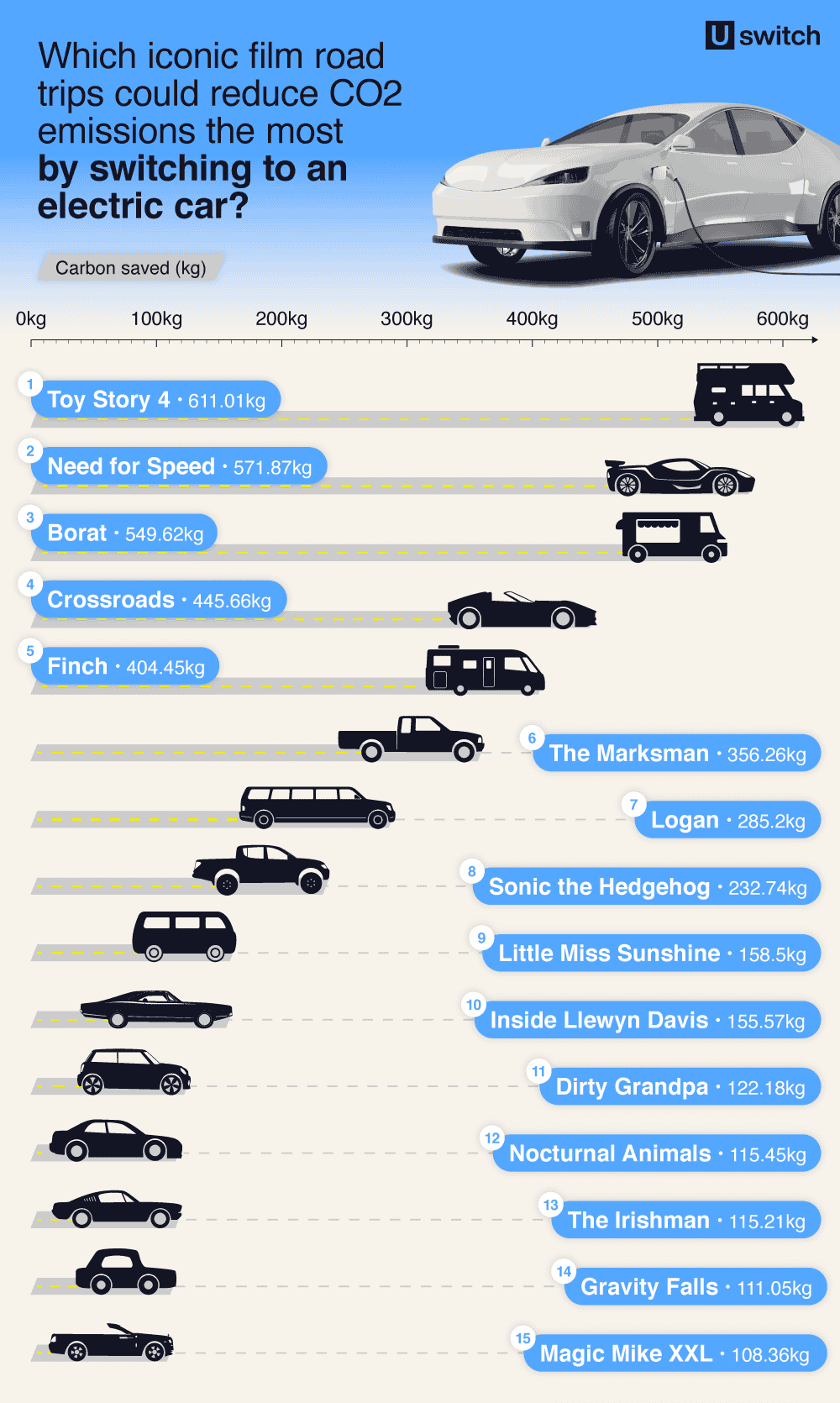 Toy Story 4, released in 2019, sees the beloved toys take the long journey between Boston and San Francisco. If you were to travel the same distance in an EV, it would take you just over 64 hours and you would reduce your CO2 emissions by 611kg.

For a film centred around street racing, it’s not surprising that the characters in Need For Speed could have reduced their CO2 emissions if they had an EV instead. With the journey going from San Francisco to New York City, and 2,087 charging points along this route, the carbon emitted could have been reduced by 571.87kg.

Although a trip with an EV could take 29% longer than with a fuel-powered car, there will be plenty of stunning views and attractions along the way to keep you occupied while your car charges up.

The road trip in Borat is filled with speed bumps and sees the main character using an ice cream van, an RV and a couple of cars to get from New York to Los Angeles. To do the same journey, you’d be looking at spending about $397 (£303) on fuel and over 45 hours on the road.

However, if Borat had opted for an electric vehicle instead, he could have reduced the cost by over 53%. Not only this, but he would’ve saved over 549kg of CO2 from being released.

The teen drama Crossroads sees four high school graduates leaving their small town in Georgia for Los Angeles in a yellow convertible. This route has the second-highest (after Borat’s journey) number of EV charging stations along the way with 2,389, so this convertible could’ve easily been switched out for an electric car.

One of the newer films on this list is the sci-fi drama Finch. As it is set in a post-apocalyptic world, the characters may have struggled to use an EV, even with 1,407 electric charging points along the journey.

That doesn’t mean you can’t use an electric car if you’re planning on recreating the route taken in the film. Going from St Louis to San Francisco in an electric car rather than a petrol one would save you $195 (£149) as well as stop 404.45kg of carbon from entering the atmosphere.

Another 2021 release is The Marksman, which earned over $15 million at the box office. A retired marine, played by Liam Neeson, travels from the US Mexican border to Chicago which would take about 40 hours if he had done it in an EV.

If he was doing it on a budget, he’d be happy to know that using an electric car would have saved him $147 (£112) in total. Switching to an EV for this trip could have also helped the environment by saving 356kg of CO2.

Superheroes are known for saving the planet in more ways than one, but switching to an EV is another way Wolverine could’ve done it in Logan. Rather than using a diesel or petrol car, if the characters had opted for an electric one, over 285kg of CO2 would’ve been saved.

He wouldn’t just be saving carbon either, using electric charging instead of filling up with petrol would save $114 (£87).

Although Sonic is known for his impressive speed, in his eponymous film he takes a road trip with James Marsden between Green Hills, Montana, and San Francisco. This would take almost 24 hours in an EV, but would reduce carbon emissions by over 232kg.

With 897 EV charging spots available along the route, you could easily use an electric car to travel the same journey as Sonic and save $94.50 (£72) as you do so.

The cult classic, Little Miss Sunshine, shows an 800-mile road trip taken in a yellow Volkswagen van. As this car most likely wasn’t great in terms of CO2 emissions, switching to an EV instead could’ve saved over 158kg of CO2.

Going electric would mean the journey would take just over 15 hours and would cost almost 70% less than using a petrol car.

The last film in our top 10 iconic road trips that could reduce CO2 emissions the most by switching to an electric car is Inside Llewyn Davis. This dark comedy sees a trip between New York and Chicago, a journey that would take a little over 16 hours in an EV.

Thinking about switching to an electric vehicle?

“It’s clear to see how switching to an electric vehicle could benefit the planet when it comes to these Hollywood road trips. If this has made you interested in moving beyond a petrol or diesel motor, here are some tips for switching to an EV:

1. Find the best one for you - To make sure you’re getting the right vehicle for your lifestyle, you can compare electric cars in terms of price, battery range, number of seats and top speed.

2. Decide between EV charging cables - You’ll need to be able to connect your EV to a charger at home so you can top up the battery, so it’s important to choose the right charging cable.

3. Find nearby charging points - Like the characters in these iconic road trip films, you need to think about where you’ll charge your car when you’re out and about. Fortunately, there are estimated to be more than 18,000 public charging points with almost 50,000 EV connectors in the UK, so you'll have plenty to choose from.”

According to the EV comparison table, the Tesla Model 3 Long Range AWD Auto has the longest range, with a 348 mi / 560 km range.

With the rise in air pollution and more investment into becoming a Net 0 country, EVs will become a big part of the future planning to reduce global CO2 emissions.

Once an EV has been purchased they are generally cheaper to run, with a full battery charge costing on average £15. With the rising price of fuel, a full tank of petrol or diesel can cost around £65.

At the moment, electric cars are more expensive to insure due to the batteries being expensive to replace. The cost of this should come down with time.

Electric vehicles are all automatic because they don't have internal combustion engines which require the use of gears.