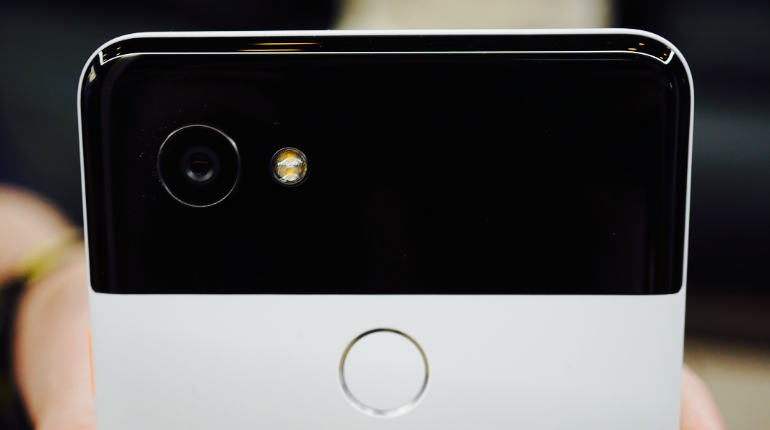 2017 has been a pretty big year for smartphone design. And when unboxing a high-end handset, I now almost expect to see a shiny infinity screen filling the front of the phone and an ultra-glossy finish around the back.

For that reason the Google Pixel 2 initially feels a little underwhelming. Where this year’s flagships from Samsung, HTC and LG have all been so reflective I could see my own face in them, the Pixel 2 comes with a matte finish that could be described as a bit dull by comparison.

Google’s handset has an aluminium unibody, which is covered up by this very plain textured finish. While this does hide any antenna lines, it doesn’t exactly make it the prettiest phone I’ve ever held.

But, after using it for half an hour, it was still fingerprint-free, which is more than can be said for the shinier phones I’ve used. And it’s certainly a lot less slippy than its polished competitors, meaning you’re far less likely to drop it.

Although a matte finish isn’t necessarily the most attention-grabbing look for a smartphone, it’s definitely far more practical. And actually, the longer you live with it, the nicer it feels.

There’s no getting away from the fact that the thick bezels (edges) at the top and bottom of the screen make the design of the Pixel 2 feel a tad old-fashioned. And the fact that the fingerprint scanner is still placed around the back of the device seems like a real missed opportunity. After all, if we must be saddled with chunky bezels, the very least they could do is include the fingerprint scanner conveniently on the front.

The bezels are significantly slimmer on the Pixel 2 XL. But they’re a little cumbersome by today’s standards. The handset itself feels very big to use, especially when you’re trying to navigate your way around it one-handed. It does give you much more screen though, which results in a much better experience when you’re watching things online.

Still, the Pixel 2 and 2 XL are not entirely without a bit of design flair. Like 2016’s original Pixel phone, there’s a glass ‘shade’ covering the top portion of the phone’s back, which gives a little stylish twist to an otherwise bland-looking device. This stands out on the black and white model, which actually looks really striking, particularly with the bright orange power button on the side.

As I’ve already mentioned, the Pixel 2’s screen is definitely not as big as the displays on rival Android handsets. Not only that, it’s not as bright either. In fact, in comparison to other phones, the colours actually seem a bit muted.

Having said that, the image quality is beautifully crisp and sharp. Although the screen doesn’t have the wow-factor, it’s actually great for watching videos, playing games and browsing the internet. Especially the larger 2 XL.

Where both phones will really wow you though is the sound quality. Thanks to the dual speakers on the front of the phone, you get a full, rich, powerful sound you don’t normally get on a smartphone.

It’s much louder than I was expecting too. In fact, when I turned the volume all the way up, it made a few people in the office jump. My music was loud, proud and crystal-clear.

And when it comes to watching videos on the Pixel 2 and 2 XL, the sound quality is definitely the best we’ve come across on a smartphone. Which makes the slightly dulled screen all the more disappointing.

Like the original Pixel though, the 2 and 2 XL are missing a headphone slot. So if you want to listen to music on the go, you’ll either need to invest in a pair of wireless earbuds or use the adaptor included in the box. A bit inconvenient perhaps, but definitely not a deal-breaker, especially as lots of smartphone manufacturers are releasing phones without a headphone jack. 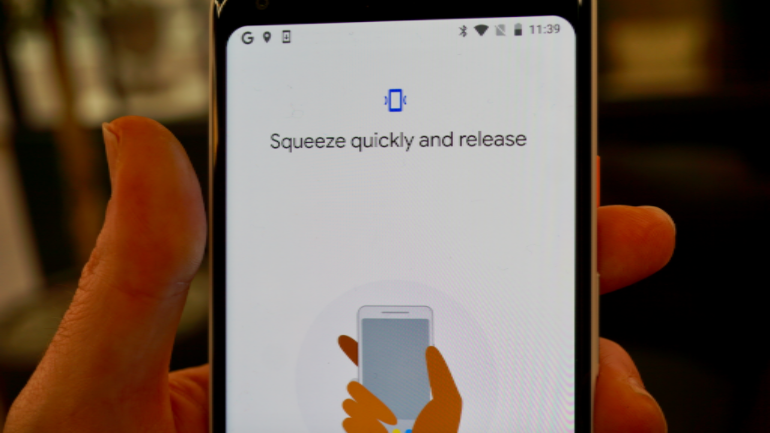 The most attention-grabbing, new feature of the Google Pixel 2 and 2 XL is the pressure-sensitive panels on the sides of the phone. Like the HTC U11, the Pixel 2 can be squeezed to access core functions.

Unfortunately, unlike the HTC U11 you can’t pick and choose what this function does. Squeezing the sides will only open up Google Assistant. So, if you can’t stand the sound of your own voice or feel silly talking to a virtual assistant, this feature will do nothing for you.

The squeezable sides on the Pixel 2 are much more responsive than the ones on the HTC U11. Gentle pressure will work on the Pixel, while the U11 needs a really firm hand to activate the Edge Sense tech.

Both the squeezable sides and the dedicated button on the homepage make it extremely easy to access Google Assistant. And with good reason too.

Google Assistant is currently our favourite voice-activated assistant on the market. Its more helpful than Amazon Alexa, understands our English accents better than Samsung’s Bixby and integrates with far more apps than Apple’s Siri. 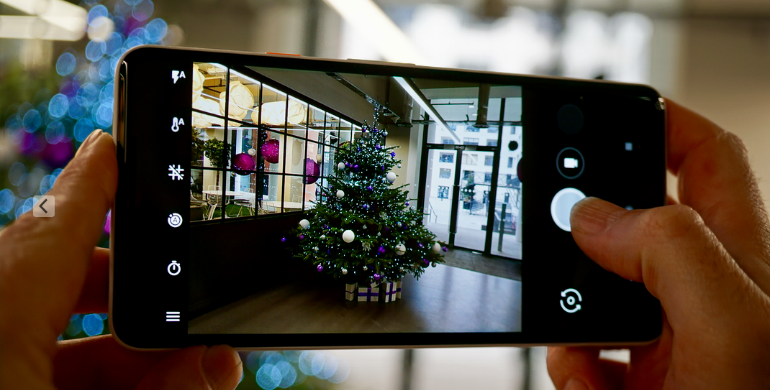 If there’s one reason to choose the Pixel 2 or 2 XL above any other phone, it’s the camera. Although on paper the single-lens 12-megapixel camera doesn’t sound much to write home about, in practice it’s one of the best we’ve ever tried.

Fans of its predecessor won’t be surprised to hear this, as last year’s Pixel is still one of the best cameraphones around. But Google has made some real improvements to the Pixel 2, most notably adding optical image stabilisation for less shaky shots, even when you’re taking photos on the go.

There’s also a wider aperture to let in more light, which makes for better, sharper photos, even in low-light conditions. And there’s improved processing after you’ve taken the shot, which will further improve the quality of your image.

This all works together to create more lifelike photos than you normally see on a smartphone. In fact, most high-end smartphones aim for an ultra-bright, eyewateringly colourful finish that’s definitely Instagrammable but not necessarily very true to life.

The Pixel 2, on the other hand, gives you incredibly detailed shots with lifelike colours that never look oversaturated or airbrushed. So you can confidently post these with ‘#nofilter’. 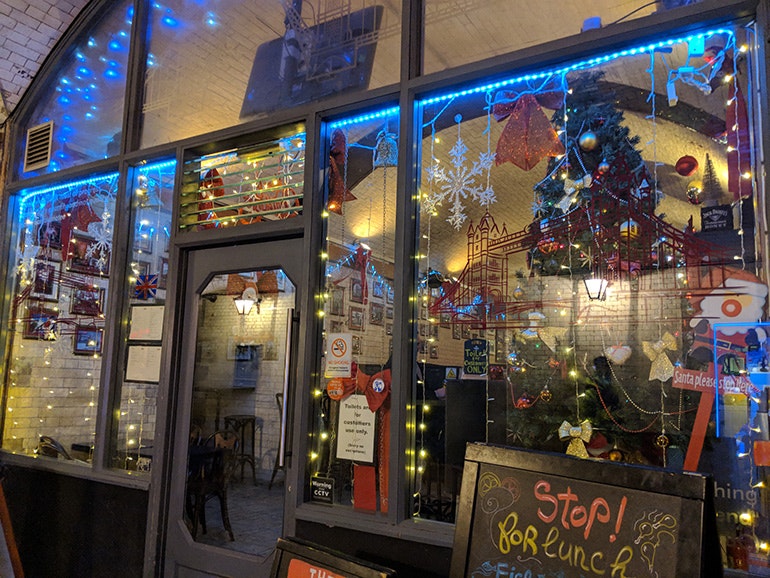 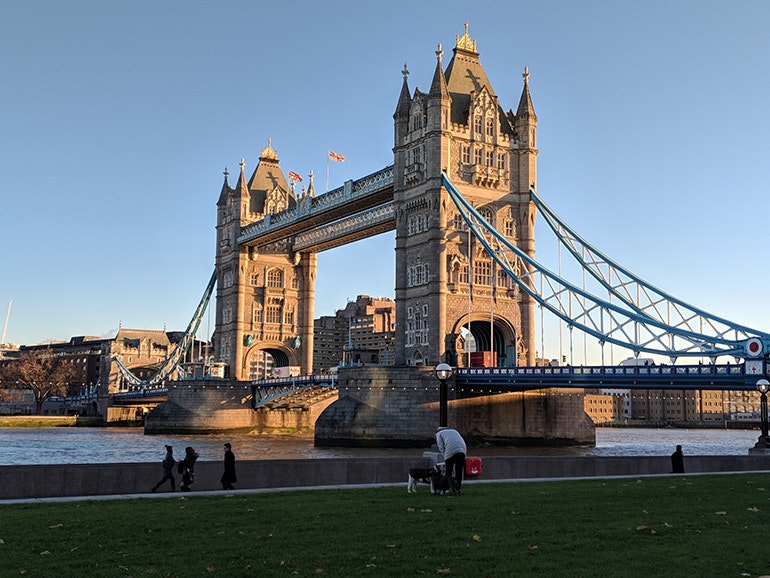 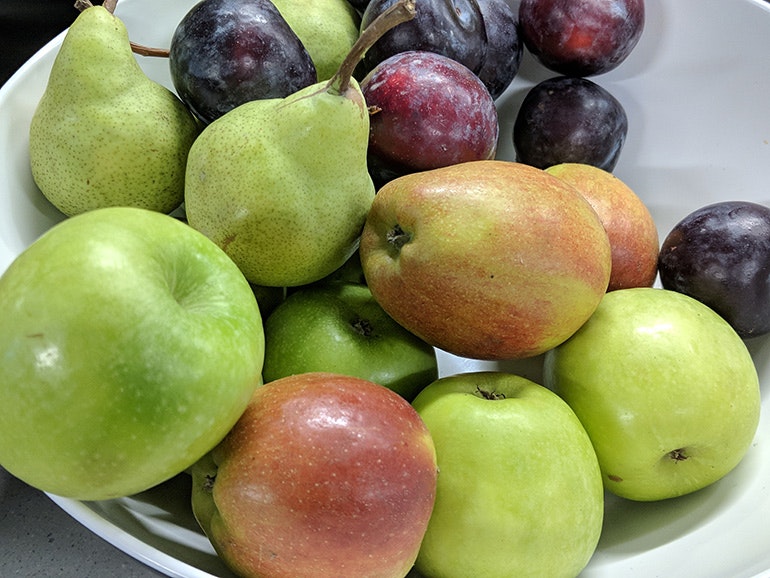 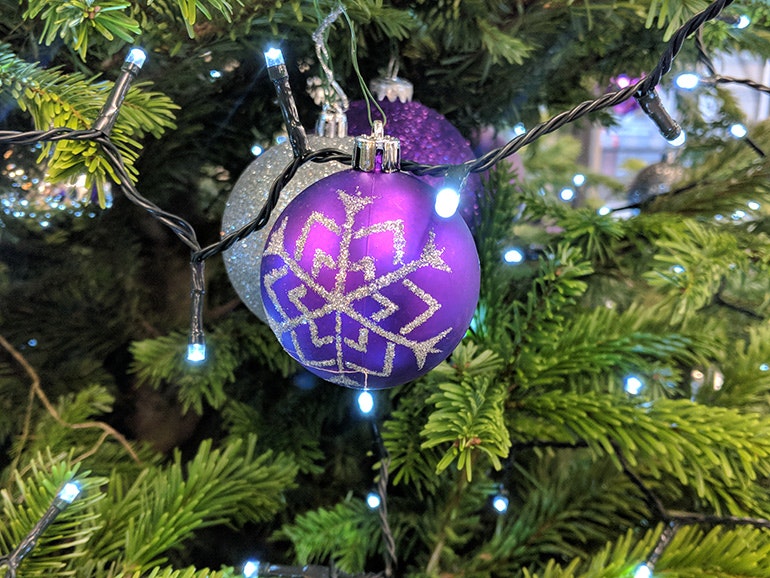 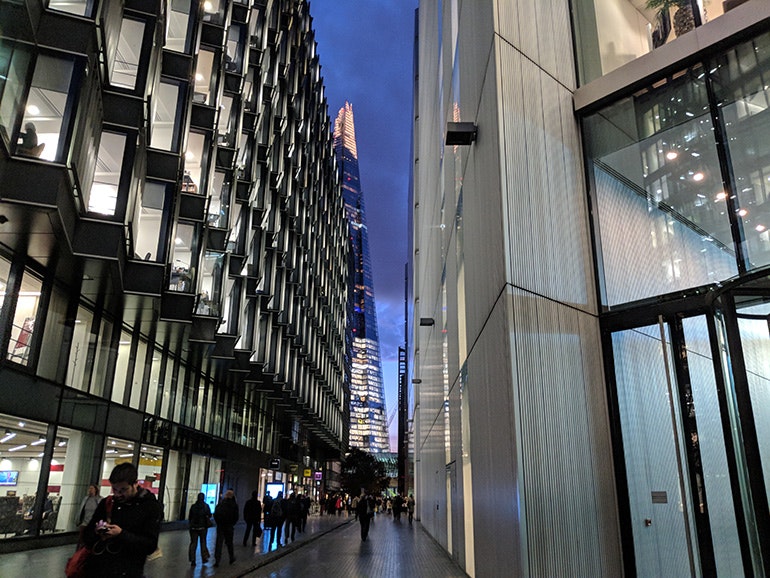 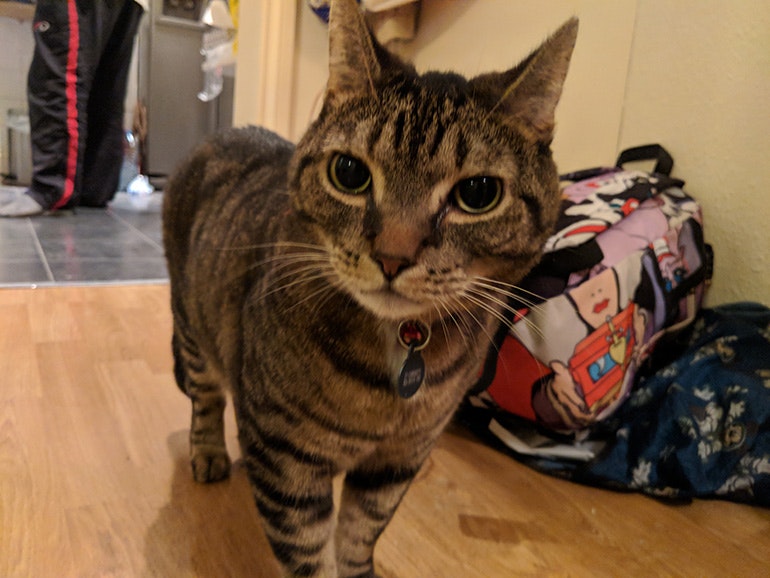 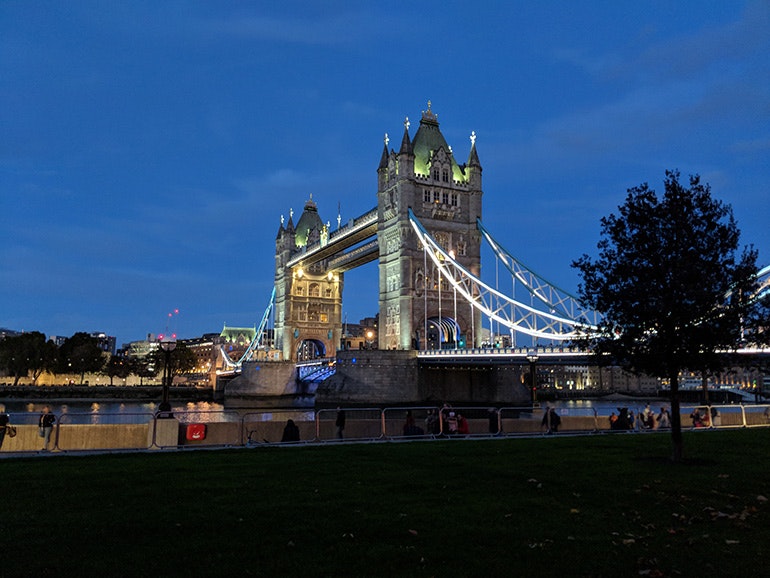 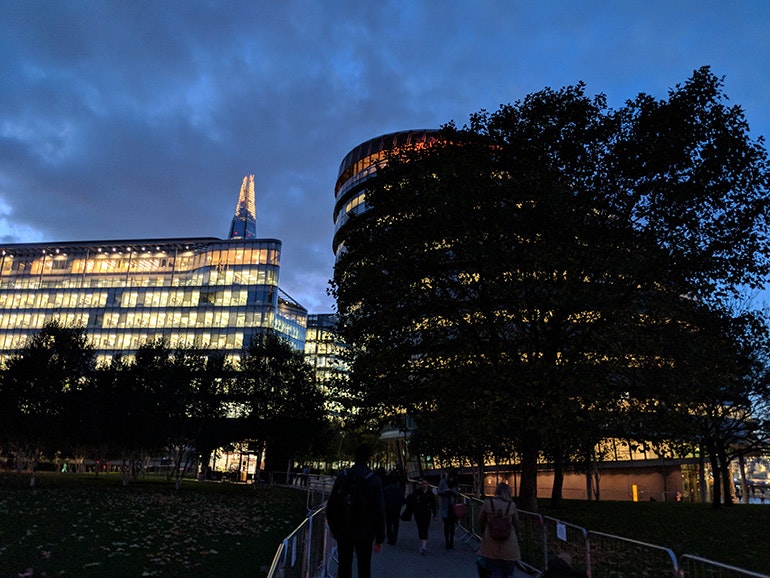 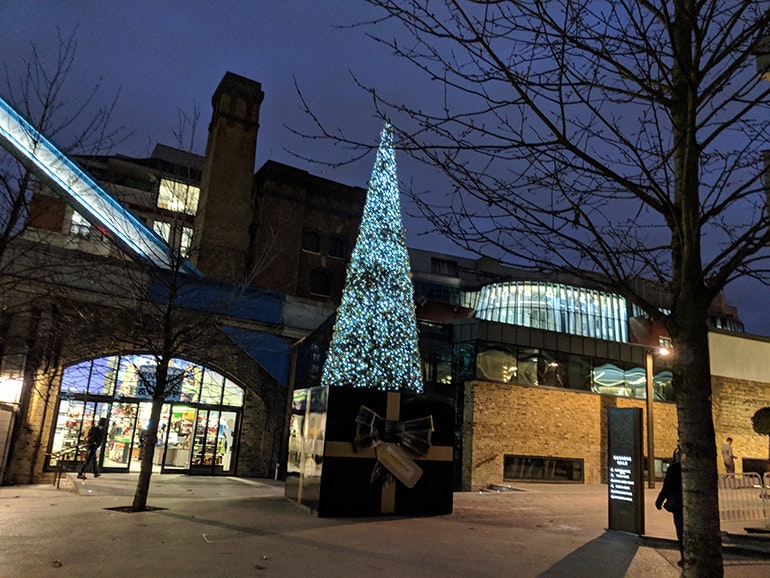 Although it’s a single-lens camera, the Pixel 2 and 2 XL have one major advantage normally reserved for dual-lens shooters: they have a Portrait Mode. This feature artfully blurs the background of an image while bringing the subject into razor-sharp focus to create a ‘bokeh’ effect. And thanks to some pretty amazing technology, Google has created a single-lens camera that can compete with high-end dual-lens cameraphones.

The Photo Sphere mode lets you take 360° shots that don’t end up looking distorted. By following a blue dot with the view-finder, you’ll be able to easily capture every angle without any jarring. And if there’s anything moving in the shot, the Pixel 2 will select one image rather than having the errant object ruining your 360° pic by appearing multiple times at different angles.

The Pixel 2 and 2 XL camera excels is capturing low-light images too. While most cameraphones perform well when the sun’s out, they quickly show their flaws after dark. And while the Pixel 2 does lose some quality in low-light conditions, the photos are still very sharp by smartphone standards and stuffed full of detail and colour. 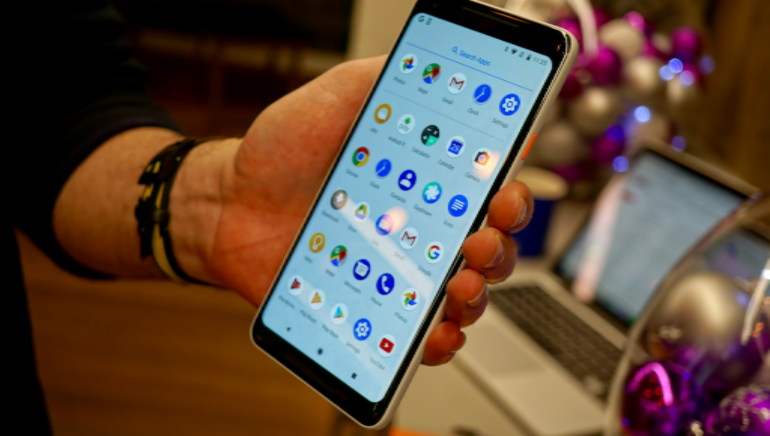 The Pixel 2 and 2 XL are lovely to use. They both come with a Snapdragon 835 processor and 4GB of RAM to keep it speedy and smooth, no matter what you’re doing. There’s no lag at all, even when flipping between multiple apps or multitasking.

You can choose either 64GB or 128GB of storage. But bear in mind there’s no option to add a microSD card, so you won’t be able to boost your memory space if you fill it up. 64GB is usually more than enough for most users, particularly as Google will provide you with unlimited full-res uploads of all your photos and 4K videos until 2020.

One of the main talking points with the Pixel 2 is that it’s given us our first glimpse of Android Oreo. And let me tell you, it has been worth the wait folks.

Android 8.0 definitely proves that less is more by giving us a much cleaner, easier and more simplified layout than we’ve seen before. Crucially, it comes with only a few essential apps and hardly any bloatware to use up your precious memory space.

The layout of the homescreen has been improved too. Naturally Google has placed its own search bar in the most convenient place possible, which is at the bottom of the homescreen. So you don’t even need to reach up to begin searching.

Above that is one row of essential apps including Chrome, Google Assistant, the Play Store and the camera. This leaves the rest of the homescreen completely free from clutter, apart from the discreet date and time at the top.

Google has also gifted Pixel 2 and 2 XL users with a range of gorgeous wallpapers to decorate the homescreen, many of which are dynamic and change subtly throughout the day. My personal favourite was the beach one which shows waves gently crashing on the shore. It’s actually pretty therapeutic to look at. 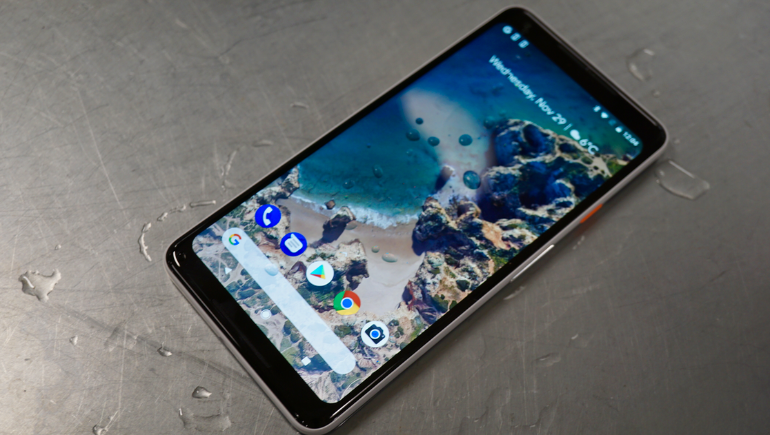 One of the biggest improvements with this year’s Pixel 2 is the addition of IP67 waterproofing. Unlike last year’s Pixel phone, which was merely splash-resistant, the Pixel 2 can survive in up to a metre of water for half an hour. So whether you’re using it in the bath or you accidentally drop it down the toilet, it should still work fine.

In fact, the entire phone feels a lot sturdier than last year’s model. The screen is made out of tough, more shatterproof Gorilla Glass 5. So not only will it survive a dunk in water, but the odd drop on the floor too.

Its sleek aluminium unibody only serves to make it feel even more durable. And Google has covered the phone with a textured finish, which, as I mentioned above, makes the phone much easier to grip, and far less likely to get covered in fingerprints. 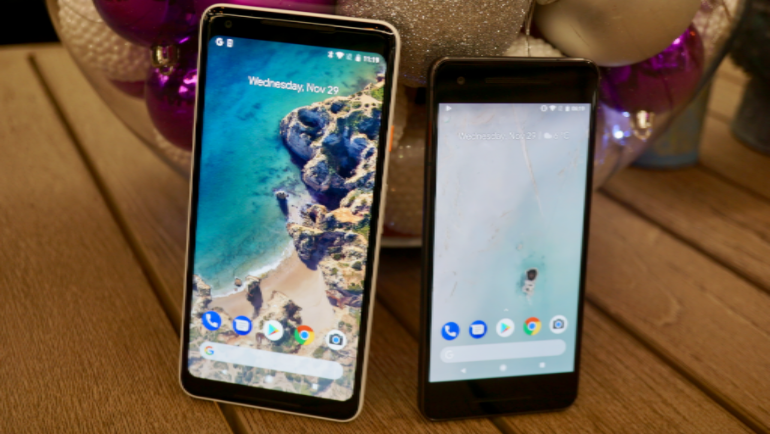 But if you are in the market for a new Android handset, the 2 and the 2 XL are definitely amongst the best all-round devices we’ve tried.

Although they don’t exactly have as many in-your-face bells and whistles as the Samsung Galaxy S8 range, beneath the surface they’re really great phones stuffed with premium features.

They come with a great sound system, a stunning camera and a hardy, waterproof exterior. Android Oreo makes the Pixel 2 and 2 XL an absolute pleasure to use and the fast processor and decent RAM keep them running fast and smooth.

If you’re tempted to get the Pixel 2 XL but can’t justify the SIM-free price, EE currently has an offer on for £47.99 a month plus £9.99 upfront. This will also get you unlimited texts and minutes plus a monthly allowance of 1GB.

The Pixel was the best cameraphone of 2016. Can this year’s model measure up? We find out.

It's the third coming of the Pixel phone. But what's it got to offer?