Back in the good old days a phone company might have one standout flagship for a year, with perhaps a larger plus variant for those customers who wanted a little more screen for their buck. Those days are now long since passed with both Apple and Samsung now choosing to release multiple variants of the same phone.

Samsung for its part had previously released three versions of its S20 line: the S20, the S20+, and the S20 Ultra.

The S20 FE or the Fan Edition if you prefer, looks to be the tech giant’s attempt at a budget flagship. At £699 it’s priced to entice those who like phones with an S in the name but who previously couldn’t justify the cost. But, even at a knockdown price is it worth your hard-earned money? Perhaps more importantly what sacrifices were made to get it to its new low price? Let’s find out.

At first glance, the S20 FE looks like a typical S20. The screen is a good size with a hole punch camera positioned in the top middle section of the display.

The phone’s three back cameras sit neatly on the left-hand side. They arguably look better than the Ultra’s four camera box setup. The FE’s back meanwhile, is minimalist just like its brethren.

It comes in six colours including, Cloud White, Cloud Orange, and Cloud Mint. That’s a lot of cloud for what Samsung is hoping will be its newest ray of sunshine.

However, it’s only when you begin to run your finger down the phone’s body, that you’ll notice the first cost-cutting measure. The FE’s back feels rough and a little bit plasticky to the touch. But the matte finish doesn’t pick up as many fingerprint smudges as the glossy S20.

Those prone to dropping their phone should also be aware that the screen comes with Gorilla Glass three screen protection. This is a significant downgrade from the Gorilla Glass 6 found on the other S20 models. But it still gives the phone decent scratch resistance, reduced scratch visibility, and reasonable strength if a scratch does occur.

So, while it offers some protection against being dropped, it would be a good idea to invest in a case and screen protector if you’re accident prone. A case also helps to avoid any smudging on the back if you pick up the device with messy fingers. When viewed at the wrong angle, the rear of the phone isn’t forgiving and reveals stains.

The handset is at least IP68 dust and water resistant, meaning that the elements won’t play havoc with its circuitry.

As we turn over the phone, we get our first look at what Samsung calls a “flat display”. The black bezels around the screen appear to be more prominent than other phones like the Ultra, but this never distracts or gets in the way.

The selfie camera looks pretty similar to what we’ve seen before, save for a chin-like notch hanging down from the hole punch. But once you start using it, you quickly stop noticing it.

Upon booting it up, the phone looks and feels as if it were any other S series in the line-up. There are differences, but they’re neatly tucked away in the settings.

Much like its stablemates before it, the S20 FE houses an AMOLED screen, one of the best types around. And users also get the benefit of a 120 Hz refresh rate. This essentially means that scrolling through the Fan Edition’s screens and apps will be a smooth experience.

At 6.5 inches, the FE’s screen is actually larger than the original 6.2-inch display on the standard S20. The in-screen fingerprint reader also remains on board.

The display’s resolution is set at 1080x2400. This will be fine for most everyday users, who will enjoy watching films or conducting their business on the device. 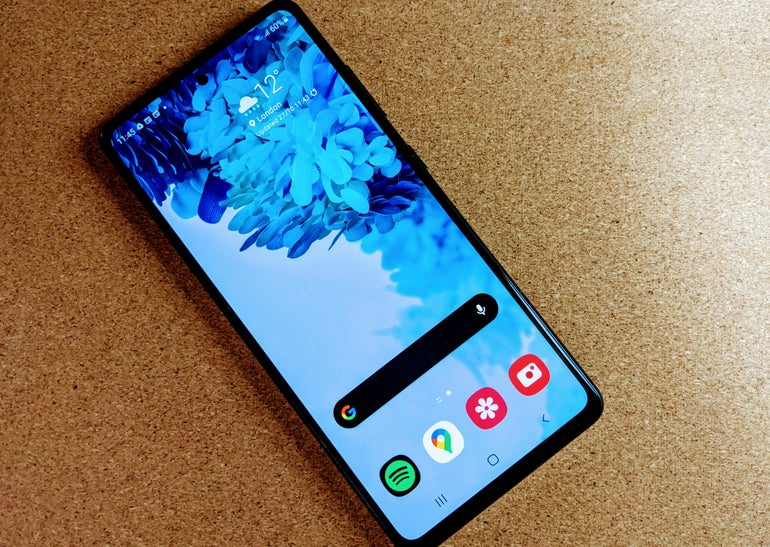 If you’re a screen aficionado who likes to tweak every little setting known to man, then unfortunately you’ll be out of luck. Unlike the devices before it, the FE doesn’t offer any options to alter the resolution.

Still, whether you’re watching the latest football highlights or bingeing your favourite box set, the display’s vividness stands out.

We were first given a hint of what the screen could do while watching highlights of the latest Merseyside derby. As a Liverpool player wheeled away in celebration, the brightness of his red shirt really stood out.

This strength was later confirmed while catching up on Star Trek Discovery. The blue and green skins of the aliens were genuinely eye-catching and made for a perfectly pleasing viewing experience.

Quite simply, the Fan Edition performs brilliantly in this area. You’ll have no problem getting through the day with its 4500mAh battery. In simple terms, that’s a lot of juice. This also represents an upgrade on the S20’s 4000 mAh.

We did our best to run the battery down with a lot of video streaming and online gaming. The phone managed around seven hours of non-stop streaming with the screen continuously active.

With normal everyday use, you shouldn’t have any problems getting it through the working day and beyond. With that said. you’ll probably still want to charge it once a day.

To that end, the phone supports fast charging. Samsung claims that with a 25W charger, you’ll be up to 50% in half an hour.

Wireless charging is also onboard, allowing you to charge those much-needed accessories or give a helping hand to another device.

The handset runs smoothly with its 6GB of RAM and 128GB of storage. Apps load promptly and swiping through menus was simple and lag free, with no hiccups.

As phones have become more advanced, the quality of the camera has become increasingly important. As such, Samsung has done its best to make the shooters an attractive offering. 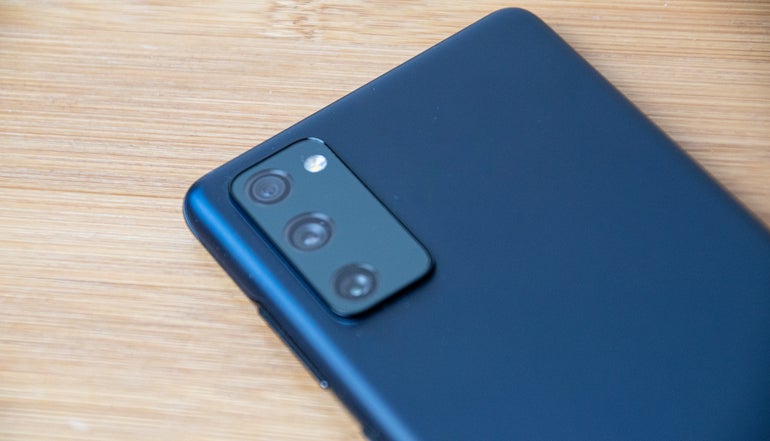 As much as some might not care to admit it, the tech giant knows that a good selfie is a selling point. As such the FE runs circles around both the S20 and the S20+, with its 32MP selfie camera. The other two come with a 10-megapixel front-facing single lens.

That’s a lot of tech talk, but as with most things, the proof of the pudding is in the eating.

We found that the cameras, coupled with onboard software, did a respectable job of capturing the moment. To the casual eye, the shots look clean and clear with no obvious flaws.

Whether a wedding reception, a trip to Disneyland or just a night out bowling with your mates, the shots are good enough to show off.

Not everything is perfect though. On closer inspection, one or two of the images look duller than they should, while others are far brighter than they need to be.

This again does not need to be a deal breaker, but is something to be considered before parting with your cash.

As with much of the phone’s set-up, pretty much all of the standard accessibility features on the standard S20 are retained on the FE. People with vision loss can benefit from abilities like Magnifier Window, a screen reader, a high contrast keyboard, and colour invert.

It’s a strong package which is slightly undermined by a surprising omission. Unlike its elders the Fan Edition lacks the Colour Lens feature.

Colour Lens enables the user to set a colour tint across the screen. In the grand scheme of things, it’s not a loss that will garner much attention, but for those that see better using certain colours, it will be a disappointment.

It’s a slightly strange exclusion because it appears that everything else remains present and accounted for. Yes, the resolution options have been taken away on this latest offering, but the screen should still be capable of supporting this basic option.

The rest of the accessibility suite has avoided the chop. People with hearing loss have the use of hearing aid support, sound balance adjustments, and Mono Sound. The latter takes sounds that would normally be intended for the left or the right ears and combines them into one stream.

The bag of tricks doesn’t stop there though with the Hearing Enhancements section also including Live Transcribe and Live Caption.

Live Transcribe allows for a conversation to be accurately transcribed on screen in real time.

Although the software makes occasional mistakes, more often than not, it’s a success. It also allows for extra options such as vibrating when a set name is mentioned, helping those who need it to stay in the loop.

For its part, Live Caption is easily our favourite accessibility choice of the bunch. Invented by Google, the software captions video media even if the app in question has a caption setting.

The function is performed by the device itself and can work with anything from a documentary on Nebula to a TalkSPORT video on Twitter. It even works with adverts.

In the same way Live Transcribe makes the occasional mistake, so does Live Caption. That said, the software appears to be impressively accurate and will prove a fantastic addition for those who want to enjoy their favourite show or stay current with the latest debates and multimedia chat.

People with physical disabilities are also catered for. With tap and swipe response controls allowing you to set how long it takes for the phone to respond to your touch.

Universal switch is also available. Sometimes referred to as Switch Access, this setting allows the user to assign certain actions to blinks and body movements. For example, blinking to go back to the home screen, or turning your head to trigger notifications. External devices such as a keyboard or specialist buttons called Switches can also be used.

Weighing in at 190g the phone doesn’t feel too heavy. It may however push the limit of one-handed use for some given the screen size.

At first, the S20 Fan Edition seemed like an odd name. After all, surely all the so-called fans of the brand would have already purchased the original higher-end products.

The latest in the S series isn’t so much for the disciples of Samsung, but for the newly or nearly converted. If you’re someone who has previously enjoyed life on the Samsung A series, then this would be a great upgrade for you.

The FE has all the best bits of Samsung, while doing away with some of the premium flash. The screen is great, the battery good, while the cameras don’t let the side down.

If this is your introduction to what a flagship can do then it’s safe to say you’re going to be impressed.

At £700, the FE is going to face stiff competition from the similarly priced iPhone 12 mini. It’s not necessarily going to be a knockout punch for Samsung, but the FE has enough in its locker to make it a close fight.