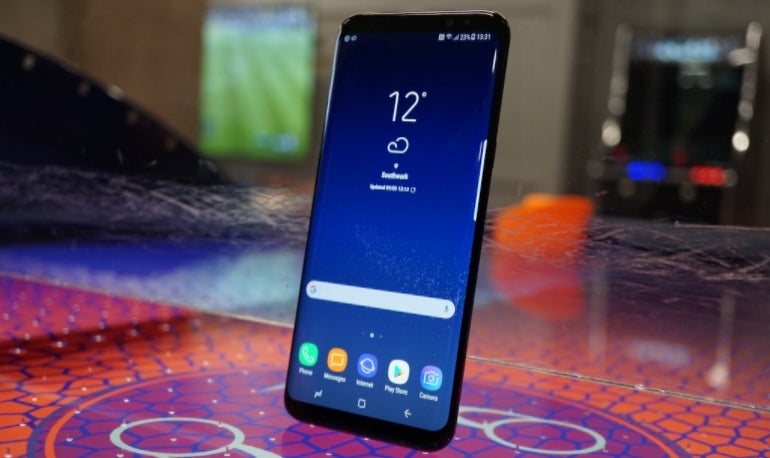 As soon as you take the S8 and S8 Plus out of the box, you know these are very high-quality handsets.

They feel nice and glossy, with no sign of the cheap-feeling plastic rear sections that Samsung was formerly renowned for.

They feel tall, too, thanks to the 18.5:9 aspect ratio (that's the ratio between the height of the screen and its width) that Samsung has opted for.

Like the G6, the screen seems to take up the whole front of the phone, which is a very good thing, seeing as it’s the way you interact with the phone.

Even the bezels/borders above and below the screen are very slim.

So slim in fact that the home button has to appear on the screen rather than being placed on the bottom bezel.

Sure you want the S8? Find a keenly priced deal on our comparison page. 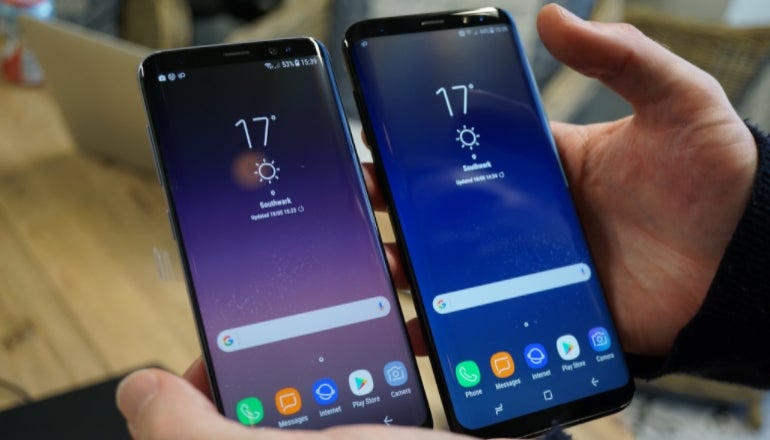 Samsung Galaxy S8 and S8 Plus in hand shot

Both phones feature the same ‘infinity’ display as seen on the Galaxy S7 Edge.

This appears to cascade over the left and right edge of the phone, to genuinely eye-catching effect.

As well as helping the handsets stand out from the competition, it adds a couple of features, which we’ll mention later.

Because the bezels are so small, Samsung has been able to pack a bigger screen without making the phone itself any larger.

Again, LG used a similar trick on the G6, but that doesn’t make it any less impressive on these handsets.

The metal and glass build gives both phones a 'premium' feel, but there are some interesting design quirks.

Not least among them is a button dedicated to Bixby, Samsung’s new personal assistant that hopes to rival Apple’s Siri and Google Assistant.

This sits on the left-hand side, below the volume rocker.

Then there’s the fingerprint scanner, which has been moved to the back of the phone, just like on the LG G6.

However, while the G6’s sits below the camera in an easy-to-reach position (and is raised slightly, making it easily identifiable to the touch), the S8’s is right next to the rear camera.

Not only is it more awkward to reach, it’s also not easy to discern by touch alone.

Plus you could end up pressing your finger against the camera by accident, leaving a fingerprint smudge on the lens.

The fingerprint scanner feels like an afterthought. Which is a shame, because otherwise these are two of the most gorgeous and fun to use phones we’ve ever tested.

One of the main differences between the S8 and S8 Plus is the size: the S8 has a 5.8-inch screen, while the S8 Plus is a little bigger, with a display that comes in at 6.2 inches.

Even on the S8 Plus, where – because of its bigger size – the pixels are slightly less tightly packed, it looks stunningly crisp.

The colours on both screens are excellent, too. They’re nice and bright, without becoming overly so.

There’s also a great difference between the light and dark parts of the image, thanks to the S8 being compatible with HDR (high dynamic range) technology.

Basically, this means you get a lot more depth to the picture, making it appear more lifelike.

There’s not much HDR content to watch on mobiles yet, but with Netflix and Amazon Prime Video on board, expect it to be the next big thing in mobile viewing.

If you watch a lot on your phone, this is a nice future-proofing feature to have.

As mentioned earlier, both are infinity displays.

As well as looking superb, the part of the screen that tapers down the side puts a couple of extra menus at your disposal.

Pull the tab in from the right, and you open a series of ‘Edge panels’.

You've then got quick access to apps, such as the calculator and clock, contacts and the Smart Select tool (which lets you capture a section of the screen as an image or gif).

You can customise the menus too, so you can have your favourite apps, contacts and tools within easy reach of the home screen.

Both the S8 and S8 Plus feature an always-on display, which always shows you the time, date, battery level and notifications to save you waking the phone. 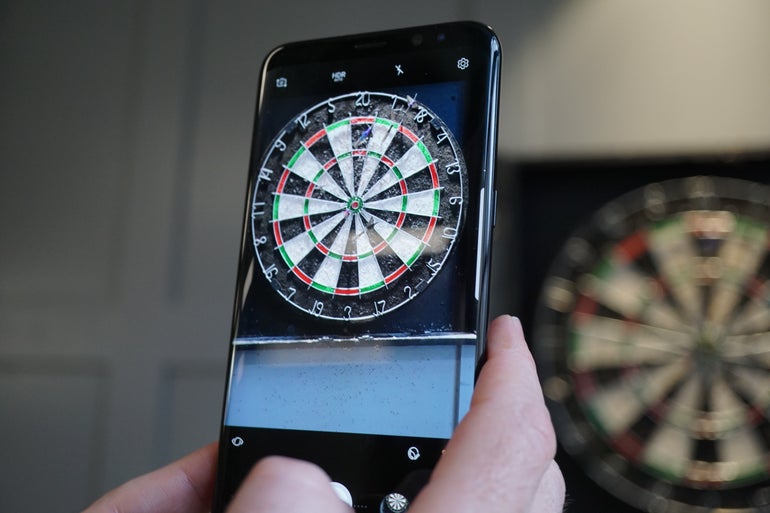 Samsung’s cameras have been some of the best around in recent years, so expectations are high for the S8 and S8 Plus.

At first glance, the S8’s camera doesn’t seem very different to the S7’s.

It has a 12-megapixel sensor, wide-angle lens and same Dual Pixel tech as found in the S7.

There’s a new multi-frame image processor that takes three shots every time you press the shutter, the idea being to reduce blur. And that’s about it as far as improvements go.

But once you start using it, you realise it’s streets ahead.

It’s super quick to open, for one thing.

Double-press the power key and it springs to life from sleep mode in under a second.

It’s amazingly easy to use too, thanks to the auto-HDR mode. Just leave it on and snap away, safe in the knowledge that you’ll get a decent shot no matter what the conditions are.

Optical image stabilisation keeps things steady, and photos are packed with detail, even when you're shooting in low light.

The S8 Plus features the same rear camera, and the same front-facing eight-megapixel camera with autofocus.

Make no mistake, the camera is an improvement on last year’s. And that was one of the best we’ve ever seen. It could well be the best mobile camera around right now. 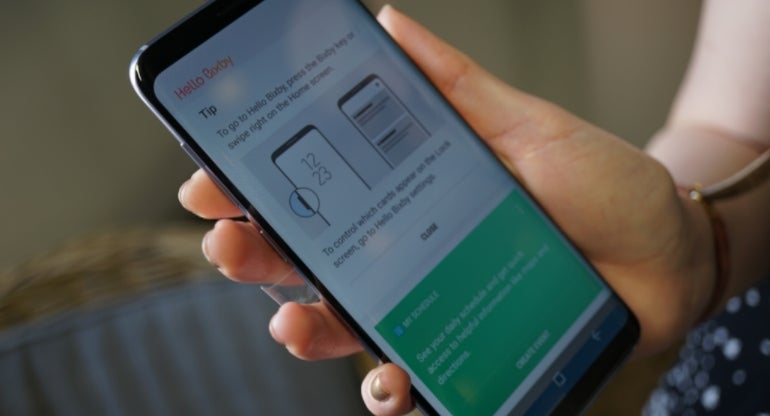 Unsurprisingly, they’re absolute powerhouses, thanks to Samsung’s own Exynos processor and the accompanying 4GB of RAM.

Whether you're playing resource-heavy games, watching HD videos or using apps (or doing all that simultaneously), the S8 or S8 Plus runs super smoothly and handles everything with aplomb. But that’s as you’d expect for a top-end phone in 2017.

In terms of software, Samsung has come on leaps and bounds in recent years.

The S8 and S8 Plus's Samsung Experience software (formerly known as TouchWiz) is a lot slicker than previous versions.

Gone are the icons that look like they were designed in Microsoft Paint, replaced by much more professional-looking versions.

It’s a lot less intrusive than previous versions too – there’s still bloatware (i.e. Samsung-made apps that are mostly inferior versions of those offered by Apple and Google), but they’re a lot easier to ignore than before.

Speaking of Samsung-made apps, these are the first phones with Bixby, Samsung’s own voice-activated digital assistant.

If you’ve used Apple’s Siri, Microsoft’s Cortana or Google Assistant, you know what to expect.

Or not as it turns out. Because at launch, Bixby can’t respond to voice commands. Considering this is its main function, it’s quite a disappointment.

But once Bixby is up and running, you’ll be able to press the dedicated Bixby button and speak your command.

Samsung says this should be working “later this spring”.

Until then, you can press the Bixby button to jump to a screen showing widgets like the news headlines, reminders, most visited webpages, etc.

It can also identify what you’ve taken a photo of and either find similar items or show you a link to buying said product.

Battery-wise, both are pretty competent without being fantastic.

Most days we used the phones, we got through a full day without having to recharge, though boosting the screen brightness and watching a video with the Video Enhancer on were both considerable drains on the battery.

Thankfully, Samsung has given users plenty of battery-saving options, by dimming screen brightness, watching videos in 1080p HD rather than quad HD+ and using the low-power mode.

It’s also worth noting that both handsets come with headphones made by AKG, which is part of Harman Kardon, the hi-fi company Samsung bought last year.

They’re much better than the usual bundled headphones, which is good, because neither phone’s speakers are much to shout about.

Neither phone is exactly cheap. The Galaxy S8 costs £689 SIM free, while the S8 Plus will set you back £779. Unfortunately, that’s the going price of a flagship phone in 2017.

That said, both are awesome handsets and you're getting a lot of phone for your money.

If you don't want to spend quite that much cash, there's always the Galaxy S7. It’s still a great phone, and the price is likely to come down now it’s been superseded. 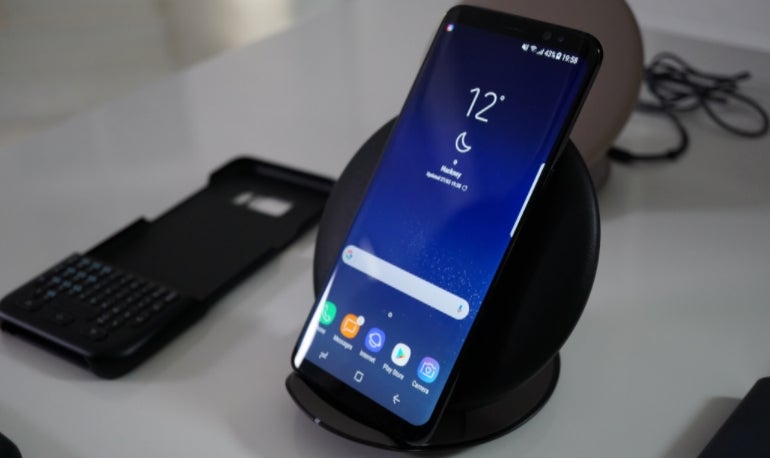 What’s left to say? The S8 and S8 Plus are fantastic phones.

It’s really a dead heat between them, the iPhone 7/7 Plus and the Google Pixel for the best phone of the last few months.

Sold on the Galaxy S8? Track down a good deal on our comparison page.

Think you'd prefer the S8 Plus? You'll find our pick of the best deals here.