Which country requires their residents to save up the longest to get on to the property ladder? Uswitch investigated in their latest study.
Share this guide

Taking the first step onto the property ladder, or even buying a new house, is a daunting decision. Depending on your circumstances, buying a home might prove better than renting, but which country takes the longest to save enough money to do so? The mortgage comparison experts at Uswitch.com uncovered how many years of saving is required to purchase a property outright with cash, in 29 different countries. The findings are based on the price of a city centre 2-bedroom flat and the average yearly savings (from the country’s average disposable income).

Countries that take the longest to save for a home 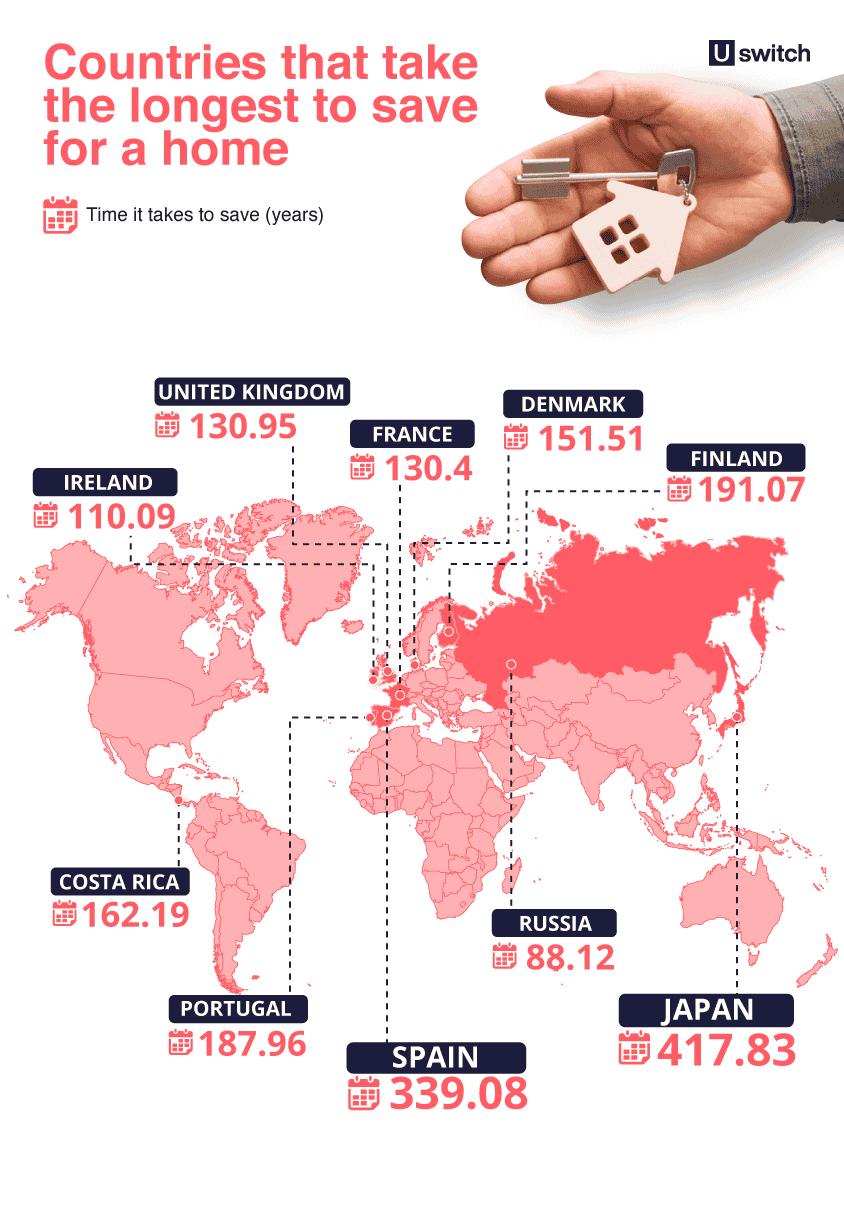 If you’re looking to buy a home in Japan, be prepared to save for a long time. If you were to purchase a two-bedroom flat near a city centre outright with cash, you’ll be looking at over 417 years of saving. The average price of a property is $535,670 and the yearly savings of most households sits at just over $1,282, which is a difference of $534,388.

Spanish apartments situated near to a city centre promise great nightlife, food, and cultural options, but if you’re saving for one by putting aside $573.73 a year (the same as the average disposable income), it will take over 339 years to make a purchase.

Although over 40,000 apartments, flats and studios are sold each year in Finland, trying to make a cash purchase by putting aside the average savings for the country ($1,728 per year) is almost impossible. As the average property costs $330,170 ($328,442 more than the annual savings), you’ll be saving for over 191 years.

There are nearly four million rented households in the UK, with the most popular type of rented property being an apartment. The number of renters could be down to the average property price sitting at $347,980 and yearly savings only at $2,657.40. This means it would take nearly 131 years to save enough to purchase a two-bedroom flat near a city outright.

The final three making up the top 10 countries that take the longest to save for a property are France, Ireland, and Russia. Of these countries, Russia is the only one to dip below 100 years of saving (at 88.1 years), as the average property price for a two-bedroom flat is $79,460. That’s over 85 times the amount residents are able to save ($901.76 per year).

The most affordable countries to buy a home 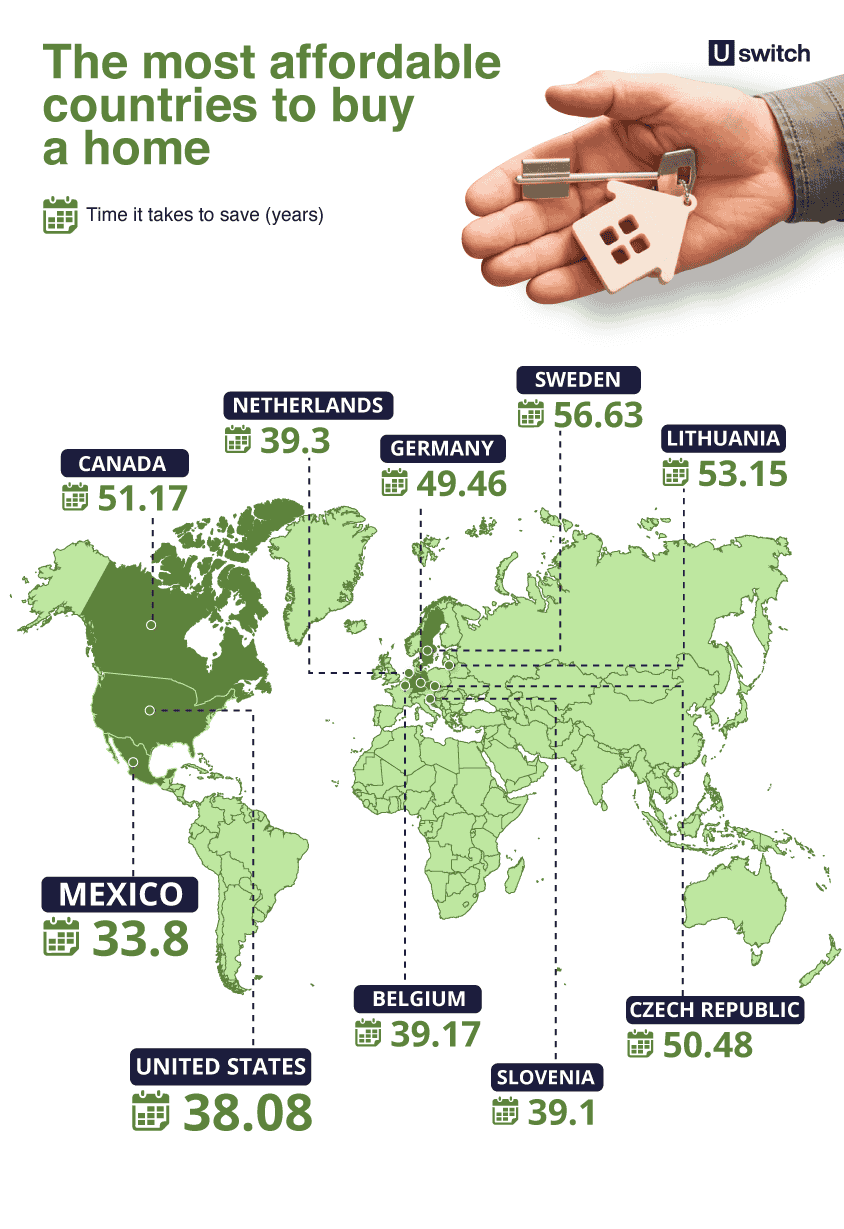 Not content on leaving you without any hope, Uswitch also found the most affordable countries to buy a home.

In first place is Mexico. It will take you just over 33 years to have enough money to make a cash purchase of a two-bedroom flat near a city centre, taking into account the average property price of $86,310 and average yearly savings of $2,553.36.

People in the United States have a tendency to lean towards owning a home rather than renting one - and the affordability allows them to do so. While the average property price ($163,030) is more than in Mexico, Americans are able to save $4,281.35 a year, on average, meaning it would take 38 years to have enough funds to purchase a home outright.

Mortgage statistics show that in Sweden, you can expect to pay around $354,830 for a property, but due to the large average amount of disposable income, you could put away $6,265.61 a year. This means 56.6 years of saving to be able to become a cash buyer and own a property outright.

If you’re looking to buy your own home and don’t fancy saving for 30+ years, use our affordability calculator to see how much you could borrow for a mortgage. 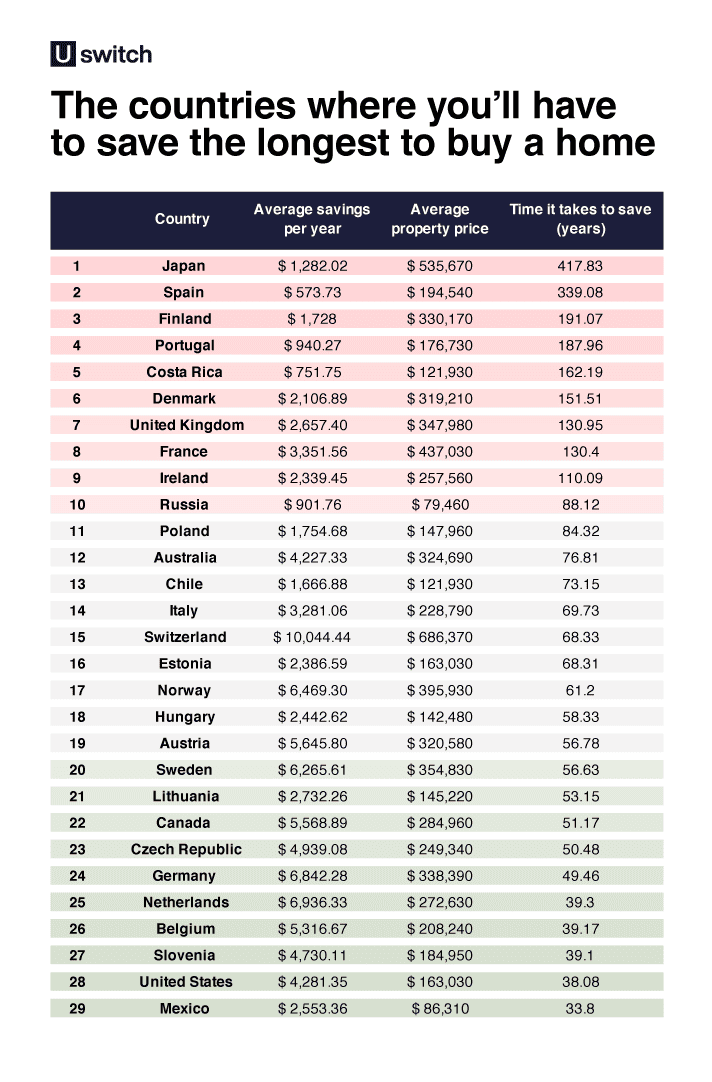