The best European countries for nature lovers to live

Since Europe is a continent with an abundance of stunning natural settings, Uswitch sought to discover the best countries for nature lovers to live.
Share this guide 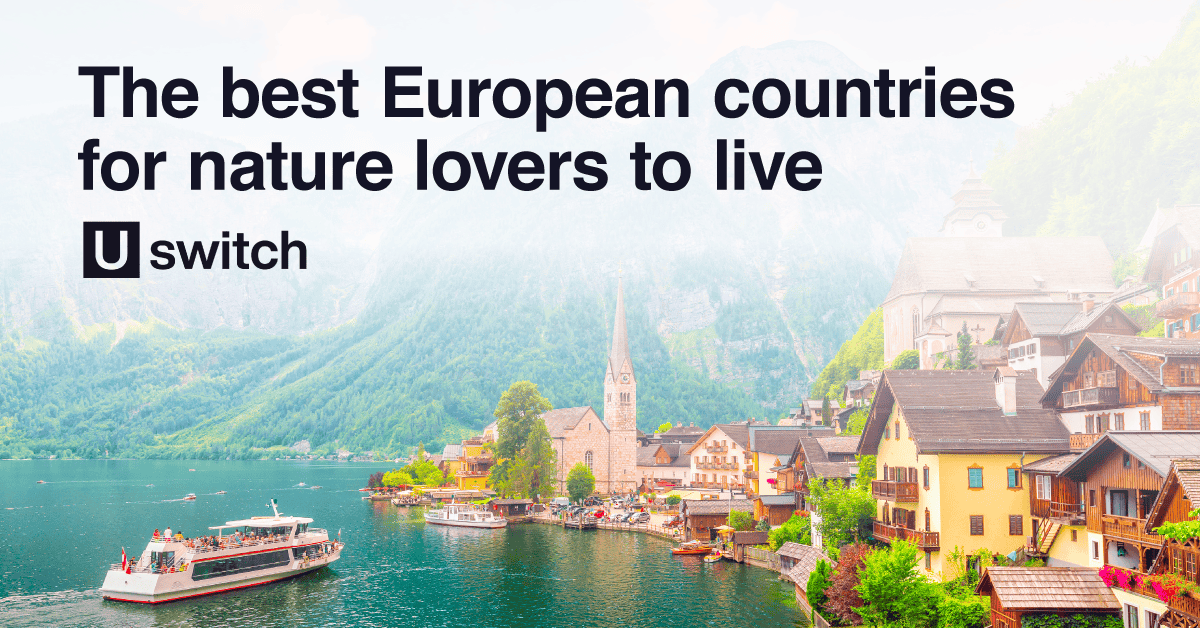 As a continent renowned predominantly for the vibrant culture of its many historic cities, Europe is often overlooked as a home to some of the most beautiful destinations in the world. From the picturesque coastline of Portugal’s Algarve to the rolling hills of Spain’s Camino de Santiago, Europe possesses an array of stunning nature to go alongside the hustle and bustle of its major cities.

The benefits of spending time in nature are backed up by evidence. A scientific study links spending at least 120 minutes per week in a natural environment with improved physical and mental health. With the issues of climate change and environmental health becoming increasingly perilous, a continent-wide effort must be maintained to protect Europe’s finest landscapes for future generations.

With this in mind, mortgage comparison experts at Uswitch conducted a study on 33 European nations to identify the best European countries for nature lovers to live. To do this, we looked at six categories: forest coverage, water coverage, flatland coverage, number of unique wildlife species, number of trails per 100km2, and average trail rating.

The best European countries for nature lovers to live 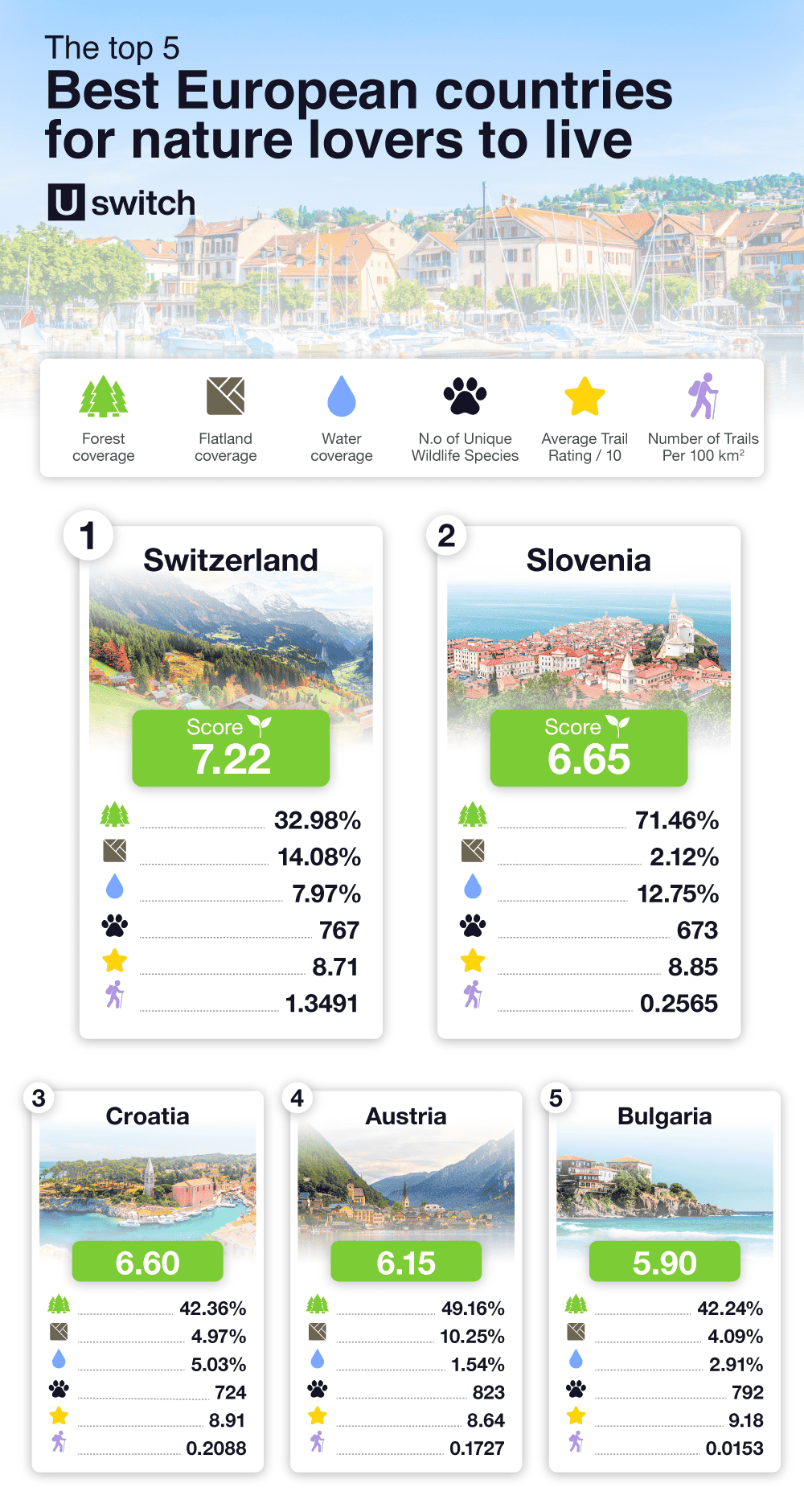 With its world-renowned mountain views and mesmerising Alpine scenery, it’s no surprise to find Switzerland at the top of our list. With over 14% flatland coverage and 767 unique wildlife species, the central European country obtained a stellar final rating of 7.22.

The Balkan nation of Slovenia was found to be the second-best European country for nature lovers. Achieving a final score of 6.65, Slovenia’s forest coverage score of 71.46% was the highest of all the countries in our study.

Croatia is the second Balkan nation to feature in our top five, thanks to its solid scores for average trail rating and number of unique wildlife species. Despite an impressive combined rating of 6.6, Croatia was prevented from an even higher ranking by its underwhelming score of 0.21 in the category of number of trails per 100km2.

With a final rating of 6.15, Austria joins Switzerland as the second central European country to feature in the best places to live for nature lovers in Europe. Despite impressive scores in the categories of forest coverage and flatland coverage, Austria had its overall rating dragged down by a lowly score of 1.54% for water coverage.

Bulgaria finished fifth in our study with outstanding scores in the categories of average trail rating and forest coverage. Despite the high placement, the south-east European country's poor rating of 0.02 for the number of trails per 100km2  reduced its final rating to 5.90.

The rest of our top 10 consisted of Sweden, Slovakia, Spain, Luxembourg, and Italy. With a forest coverage score of 63.16%, Sweden took sixth spot with a 5.85 rating. Despite a poor score of 0.94% for flatland coverage, Slovakia’s strong performance in other categories was enough to secure a seventh-placed finish.

With a study high score of 1,510 for the number of unique wildlife species, Spain finished eighth with a final score of 5.52.  Following Spain was Luxembourg, who obtained a 5.41 rating despite a flatland coverage score of 0%. Rounding off our top 10 is Italy, finishing marginally behind Luxembourg with a score of 5.40.

The worst European countries for nature lovers to live 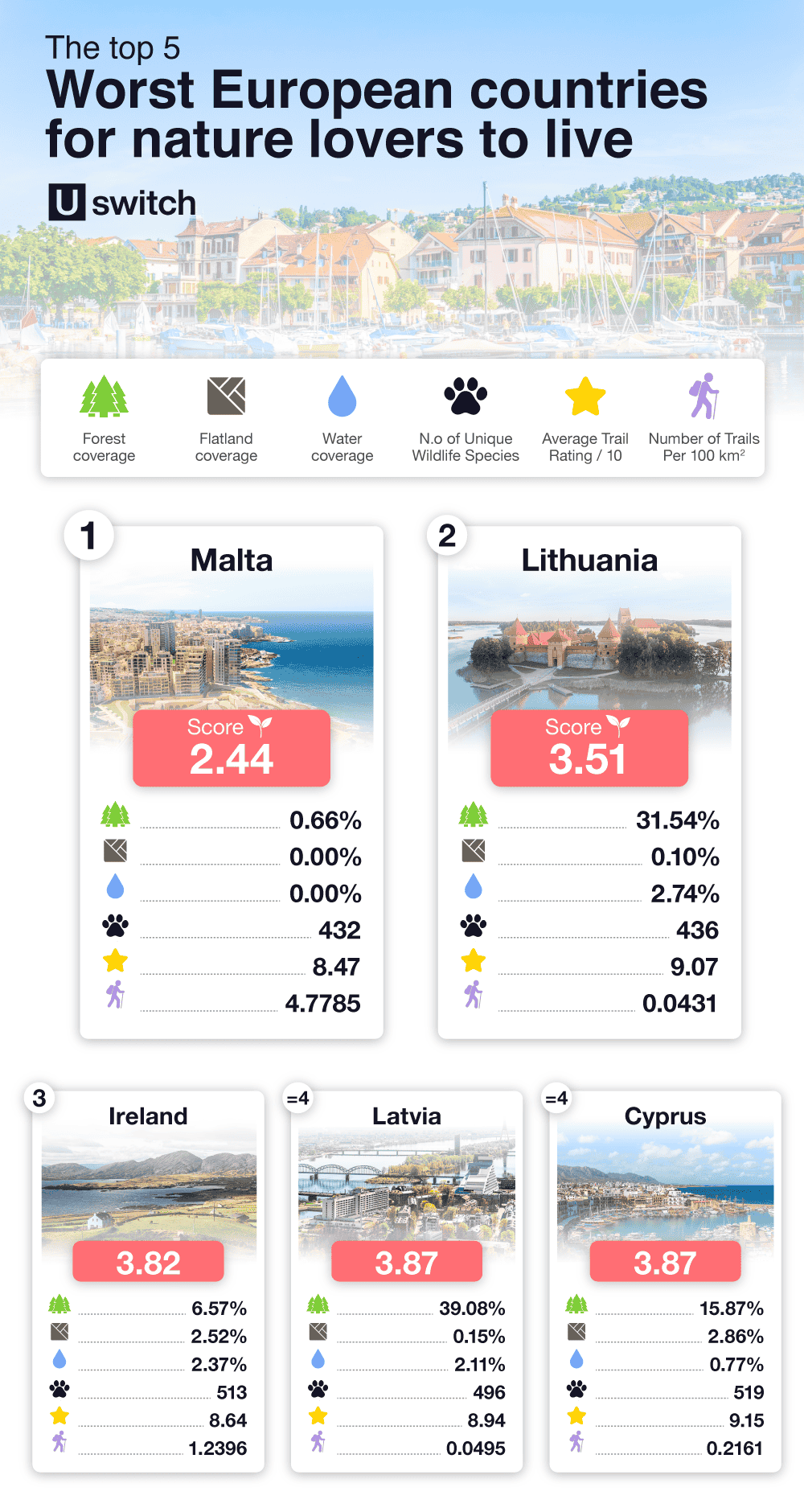 With scores of 0% for flatland coverage and water coverage, the Mediterranean nation of Malta was found to be the worst European country for nature lovers to live. An impressive number of trails per 100km2  score of 4.78 was not enough to prevent the world’s tenth smallest country from receiving an overall rating of 2.44.

Despite a decent forest coverage score of 31.54%, Lithuania’s final score of 3.51 was the second-lowest in our study. The Baltic state’s poor position was largely caused by its mediocre scores for flatland coverage and number of unique wildlife species.

Despite being home to beautiful natural retreats such as Lough Tay and The Cliffs of Moher, the Republic of Ireland is a surprising entry in the bottom section of our list. With disappointing scores of 6.57% for forest coverage and 513 for number of unique wildlife species, Ireland received a final score of 3.82.

With weak scores in the categories of flatland coverage and number of trails per 100km2, Lativa was found to be the fourth-worst European country for nature lovers. Despite a lacklustre overall score of 3.87, the Baltic state’s impressive score of 39.08% for forest coverage allowed it to edge ahead of Ireland in the table.

Latvia was joined in fourth place by Cyprus, who had its subpar score pulled up by an average trail rating of 9.15.

The remainder of our bottom five consisted of the Czech Republic, Denmark, Poland, Iceland, and Turkey. The Czech Republic shared sixth-last place with Denmark, with both countries receiving a score of 3.94.

Following a paltry score of 0.13% for flatland coverage, Poland finished eighth bottom of our list with a final rating of 4.23. Iceland and Turkey complete our bottom 10 with scores of 4.40 and 4.44, respectively.

How can I live closer to nature?

In this study, we’ve looked at many of the most beautiful places in Europe to identify which ones were the best to live for nature lovers.  While there are an endless array of beautiful nature retreats across the continent, living closer to nature doesn’t have to mean leaving the UK.

From the stunning meadows across Costwolds to the majestic views from the mountains in the Lake District, there are a wealth of beautiful rural areas in the UK to rival anywhere in Europe.

For those with serious ambitions of moving to the countryside, mortgage expert Florence Codjoe has these tips:

“For many nature lovers, the idea of moving to the countryside sounds like an idyllic dream. While there are many benefits to swapping hectic city life for the relaxing ambience of a rural retreat, there are a few things to consider before making a move.

Living in a less populated area can often mean less access to offices and job opportunities. This won’t be too bad if you’re planning to work from home, or your current job is within commuting distance, but it’s essential for anyone switching jobs to plan ahead.

Even for those able to do their jobs from home, it’s important that you check the quality of the utilities in your area. Many rural areas have less reliable internet signals compared to cities, so if you’re someone relying on Wi-Fi to do your job, then this is something to bear in mind.

Lastly, as many countryside retreats are in remote areas, it’s important to ensure you have good local access to vital services like hospitals, schools, travel, and emergency services. These resources will be especially important for those with young families, so it’s always good to do your research in advance.

All it takes is a bit of forward planning, and countryside life can be everything you imagined it to be.”

Florence is also a car insurance spokesperson for Uswitch and has recently been quoted in Newsweek, The Sun and Daily Record.