In the Platinum Jubilee year, our mortgage experts have analysed house price data to find out how much having a royal name in your street name could boost your property value.
Share this guide 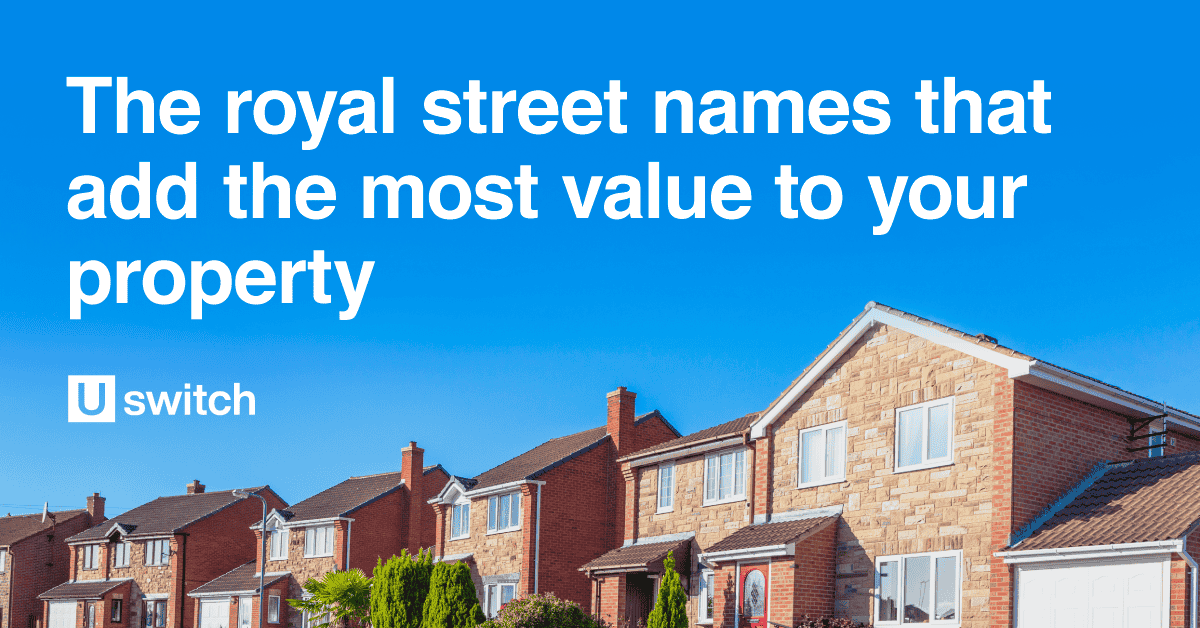 The UK’s fascination with the royal family is no secret. Whether you’re an ardent royalist or a lifelong sceptic, the fact remains that it’s almost impossible to live in Britain without the royal family having an impact on your life.

With the presence of the royal family so intrinsic to British culture, it’s no surprise to find streets across Britain with names relating to the monarchy. But how much can having a royal street name add to the value of your property?

Our mortgage experts at Uswitch conducted a study on 34 royal-themed words to find out which ones had the biggest impact on home value.

If you are looking for a new home on a royally monikered street, compare mortgages to get the best deal for you. 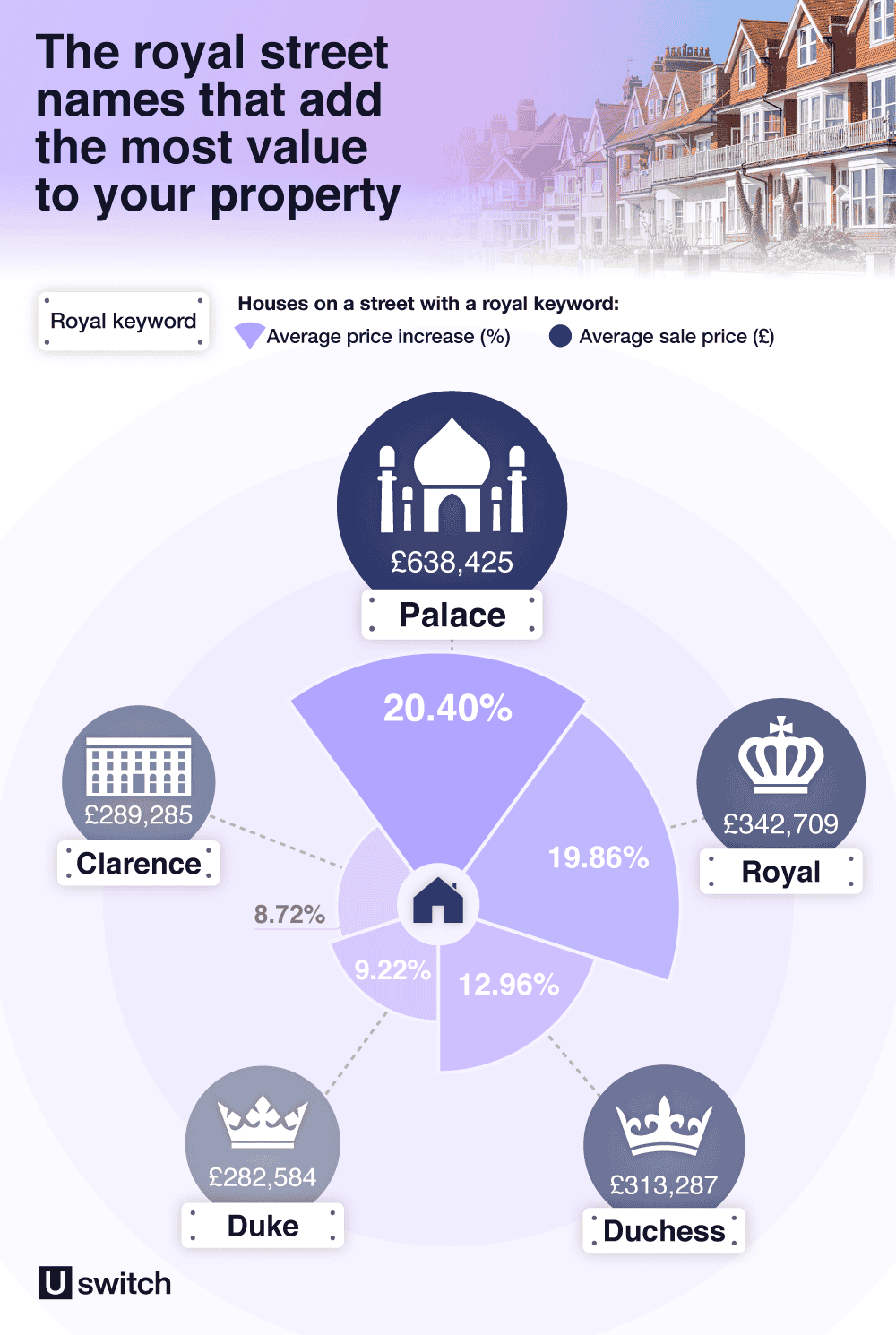 To discover the property value of homes that have royal street names to the average property price in areas across the UK, we calculated the average price increase (%) of each royal word in the study. While house prices were compared to properties of the same type, other environmental factors that may also have affected property value were not accounted for.

With its connotations of regal glamour, it comes as little surprise to find that ‘palace’ is the royal word that was found to offer the biggest increase in home value. Found on a total of 1,160 street names across the UK and with an average sale price of £638,425, the word ‘palace’ was found to increase property value by a monumental average of 20.4%. So while your home may lack the historic splendour of Buckingham Palace, having this word in your street name might mean your home is worth more than you think.

There are few, if any, words capable of evoking a sense of importance quite like ‘royal’. It’s for this reason that this noun can be found on no less than 3,471 streets, with its associated average price increase of 19.86% narrowly missing out on the top spot. Whether you’re an ardent royalist or a devout republican, having the word ‘royal’ in your street could still see your property value soar.

With the global coverage that first surrounded Kate Middleton, and later Megan Markle, during the last decade, ‘duchess’ has become an inescapable word within British culture. It seems that the word holds similar value in the property market where its average sale price of £313,287 represents a near 13% average price increase.

One place behind ‘duchess’ is the word ‘duke’, suggesting that Kate and Camilla hold more clout in the property market than William or Charles. Despite an impressive average property price increase of 9.22%, the male royal title trailed its female equivalent by over 3%. Though ‘duke’ offered a significantly lower price increase than ‘duchess’, it was found in over ten times more street names across the UK.

Completing our top five is ‘Clarence’, which finished narrowly behind ‘duke’ with an average price increase of 8.72%. Featured in the name of the historic Clarence House premises, Clarence was found in 2,664 street names, with the properties recording an average sale price of £289,285.

Completing our top 10 are the words ‘Kensington’, ‘Harry’, ‘sovereign’, ‘Earl’, and ‘Buckingham’. With an average price increase of 7.82% across 1,826 streets, Kensington takes the sixth spot in our study, suggesting that the aura surrounding Kensington Palace has translated to the property market.

Concluding our top 10 are Earl and Buckingham, which finished ninth and tenth with average increases of 6.8% and 6.1%, respectively.

The royal street names that decrease the value of your property 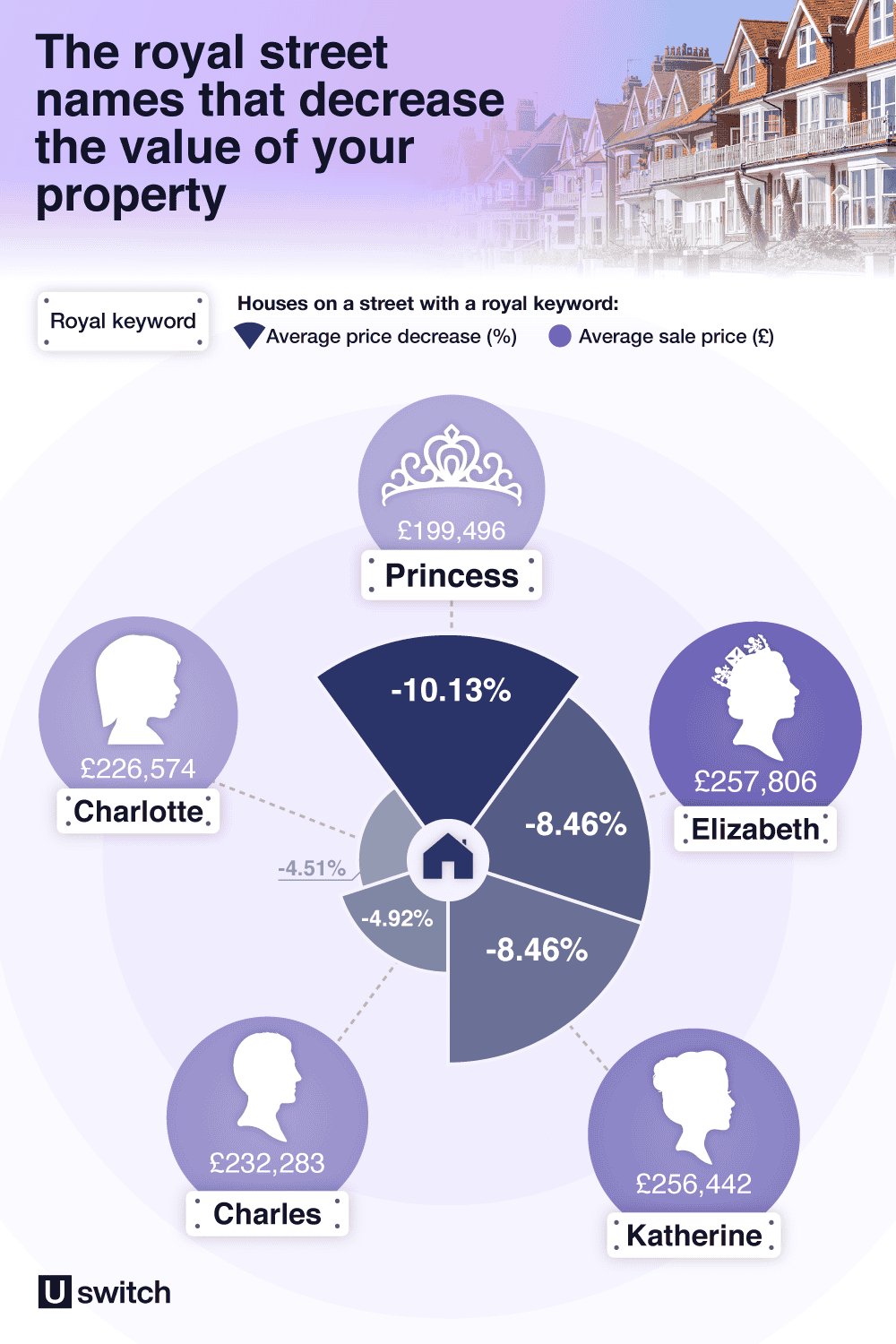 Despite the never-ending interest surrounding the life and times of Lady Diana, it seems that the aura of ‘the people’s princess’ does not wield the same impact on the property market.  Found on 2,256 streets, ‘princess’ was found to give properties an average price decrease of 10.13%, with the average sales price of £199,496 the lowest of all the words in our study.

As a nation with a renowned reverence for our monarchy, it may come as a surprise to find that the first name of our Queen appears to have a detrimental effect on home value. With an average price decrease of 8.46%, ‘Elizabeth’ recorded the joint-second worst score in our study.

Sharing the penultimate place on our list with ‘Elizabeth’ is ‘Katherine’, suggesting that female monarchy names hold little currency on the property ladder.

Recording an average property price decrease of 4.92% and an average sale price of £232,283, ‘Charles’ is the fourth entry in our bottom ten. Despite being found in over 3,700 UK streets, it seems like the name of our current heir to the throne holds little weight when it comes to increasing your house price.

Taking the final unwanted place in our bottom five is ‘Charlotte’, recording an average property price decrease of 4.51%. Despite appearing in over 1,000 street names and holding an average house price of £226,574, the name of our current Princess of Cambridge seemed to do little when it came to increasing your home’s value.

‘Lord’, ‘Beatrice’, ‘Louis’, ‘Henry’, and ‘Edward’ make up the rest of our bottom 10.  With average property price reductions of 3.04%, ‘Lord’ and ‘Beatrice’ were the words with joint-sixth biggest average decreases in property value.

Comparing the average price of homes on streets with royal names with the average house price in the respective area, we uncovered the local jurisdictions in which a royal street name appeared to have the biggest impact on home value.

With an outstanding average property price increase of nearly 30% and an average sale price of £454,411, the East London borough of Tower Hamlets was found to be the local authority where a royal street name had the biggest impact on house prices.

With over 343 royal street names, Tower Hamlets comfortably topped our list, finishing more than 3% ahead of its nearest rival. As the home to the historic royal fortress, the Tower of London, it seems as though the borough offers similar security when it comes to home value.

Greenwich is the second consecutive London borough at the top of our list. With a vast total of 909 streets with royal words in their name, the southeast borough recorded a formidable average property price increase of 26.48%. As the onetime home of the Palace of Placentia and birthplace of Tudor monarchs like Henry VIII and Elizabeth I, it seems as though Grenwich’s illustrious royal history still holds weight in the modern day.

Completing the capital dominance at the top of our list is the East London borough of Newham. With 822 royal street names in the area and an average sale price of £360,698, the home of the 2012 Olympic Stadium was found to offer an average property price increase of 19.93%, suggesting that the patriotic spirit generated by the games lives on in the property market.

While London dominated the top of our list, the bottom of our table was comprised entirely of Scottish places. The Orkney Islands, Perth And Kinross, and Scottish Borders were the local jurisdictions where royal street names resulted in the biggest average decrease in property value.

Concluding our bottom three is Scottish Borders with an average property value decrease of 31.34%.

How can you increase the value of your property?

As demonstrated by our study, the impact of royal street names on property value can vary wildly from location to location. Thankfully, there are an array of practical steps you can take to maximise the value of your home.

“Even when the market is favourable for sellers, there are further steps you can take to ensure you attract the best price possible for your property.

“For example, updating your home furnishings is a great way to raise the price of your household. By having a modern-looking home that looks ready to move into, you’ll reduce the anxiety of potential buyers who may be worried about renovation costs after purchasing.

“With many people increasingly concerned about their impact on the environment, fitting your home with energy-efficient appliances can be a great way to add extra value to your property. By replacing dated gas-based appliances, you create a more efficient home and reduce the concerns potential buyers may have about rising energy bills.“

For more information on ways you can maximise the price of your property, read our comprehensive guide on adding value to your home.

You can hire an estate agent to provide you with a valuation of your current property. We advise using a local estate agent who is more likely to have a better understanding of the house prices in your area.

Usually, it shouldn’t cost you anything to have your home valued by an estate agent.

If you are moving home, you may be able to transfer your existing mortgage over to your new property—this is known as ‘mortgage porting’. Mortgage porting is like remortgaging, except that you’re staying with the same provider.

In some instances, mortgage porting can save you money while eliminating the inconvenience of having to find a new lender.

To find out more about whether mortgage porting is a viable option for you, visit our comprehensive guide on porting your mortgage here.

All places with a potential Royal connection were included (i.e St James’ road will be included under James due to St James’ palace, even if it’s possible that the individual street is named after St James himself)