What broadband speed do I need for Black Friday?

Fact Checked
Black Friday is almost here and you know what that means: gadgets, gadgets, gadgets. It’s one of the biggest shopping events of the year and always has a big emphasis on electronics and appliances, so once the dust settles you’re sure to have a healthy stash of new tech to play around with, but are your broadband speeds up to the task?
Share this guide 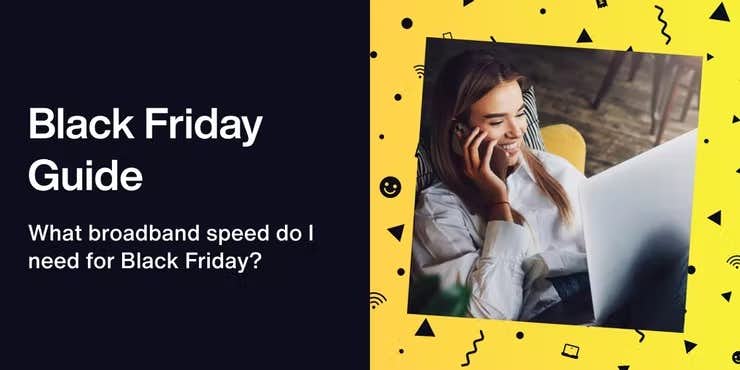 A quick estimation of the number of gadgets for households of vary sizes shows you how the demand on your broadband quickly adds up. Those living alone will probably only be using a maximum of 35Mbps of bandwidth at any given time, whereas a family of four could use up to 90Mbps if everyone was online at once.

If you’re streaming in HD or 4K, then it will place even more demand on your broadband, with 1080p using 5Mbps and 4K or ultra-high definition streaming needing as much as 15Mbps to stream properly.

So if you’re planning on binging Blue Planet II in ultra-HD, you’ll need a solid internet connection and good broadband speeds to ensure your viewing experience is uninterrupted.

If you have an Alexa or a Google Nest speaker controlling your lights and heating, setting reminders and, of course, streaming music, that's a further strain on your broadband connection.

What have you got your eye on this Black Friday, 26th November? Are you planning on shopping for new gadgets like the ones listed above? Have a look around your home and add up the download and upload requirements of the devices you have that connect to the internet.