When you're choosing a broadband provider, speed, price and usage limits are likely to be your chief considerations. But arguably, customer service should be just as significant.

Let's assume something goes wrong with your broadband connection — which it probably will, at some point. We've got some quick fixes that may help you that you can try here. But sometimes, you won't be able to fix the problem yourself and you'll need a provider that gets you reconnected and back up to speed quickly.

Of course, if you're looking for technical support or asking about services, you'll want helpful, knowledgeable customer care staff that can get you the answers you need, too.

And it's vital that the company’s call centre competently deal with any complaints you have and aren't just interested in earning commission.

Perhaps the best measure of a broadband supplier's customer service is Ofcom's quarterly report. This names and shames providers that received the most complaints and highlights those that impressed with the fewest customer complaints, too.

Below, we’ve listed all the results averaged across the year so you can see which providers are consistently performing well and which home broadband providers you might want to think twice about.

When publishing 2017's data, Ofcom took a deeper dive and published new metrics to give a better understanding of customer service quality across broadband providers. In general, people seem to be happy with their broadband, with eight out of 10 consumers saying they were satisfied with their provider. But some providers do fare better than others, however, with Virgin Media as the provider most likely to be recommended to a friend and TalkTalk being the least.

Ofcom completed its biggest survey into the customer service within telecoms to try to help consumers find the best broadband package. We've included the industry average and bolded the best and the worst in each category.

For reference, the tables show the companies which got the got the fewest and most complaints per 100,000 customers, and the complaints are based on averaging Ofcom's quarterly reports for a given year. 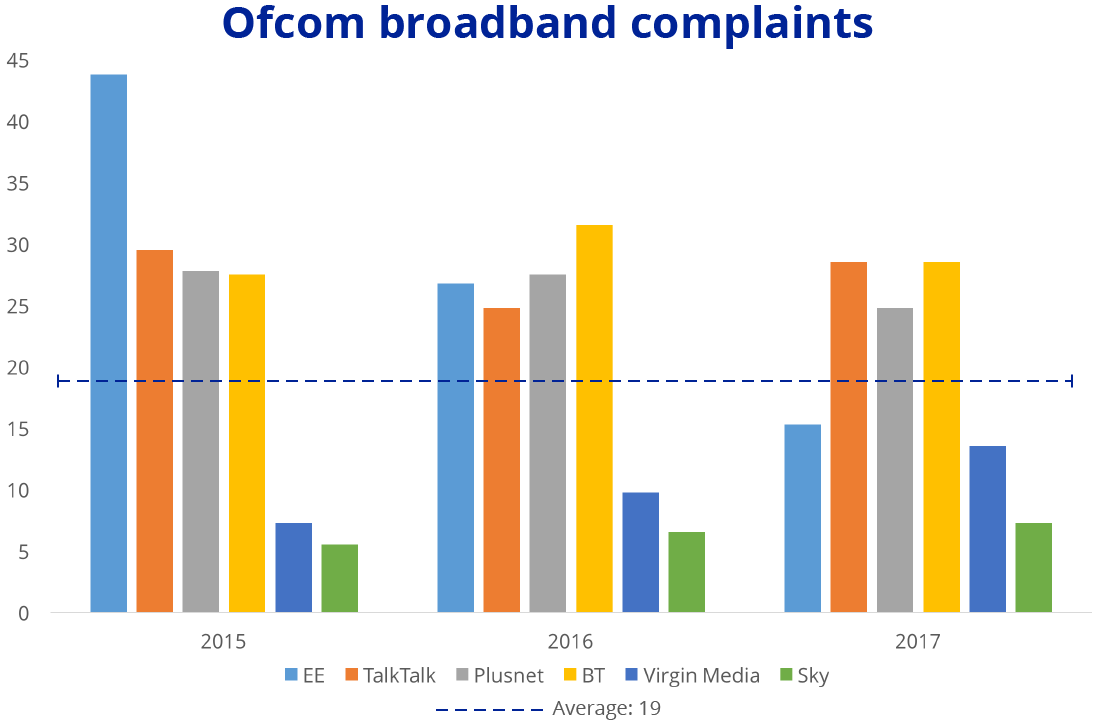 Check out our fastest broadband providers with our speed test.