Back in 2012 Netflix launched in the UK - for just £5.99 a month users could enjoy unlimited streaming of movies and television shows. Today, a monthly subscription costs up to £15.99.
Share this guide 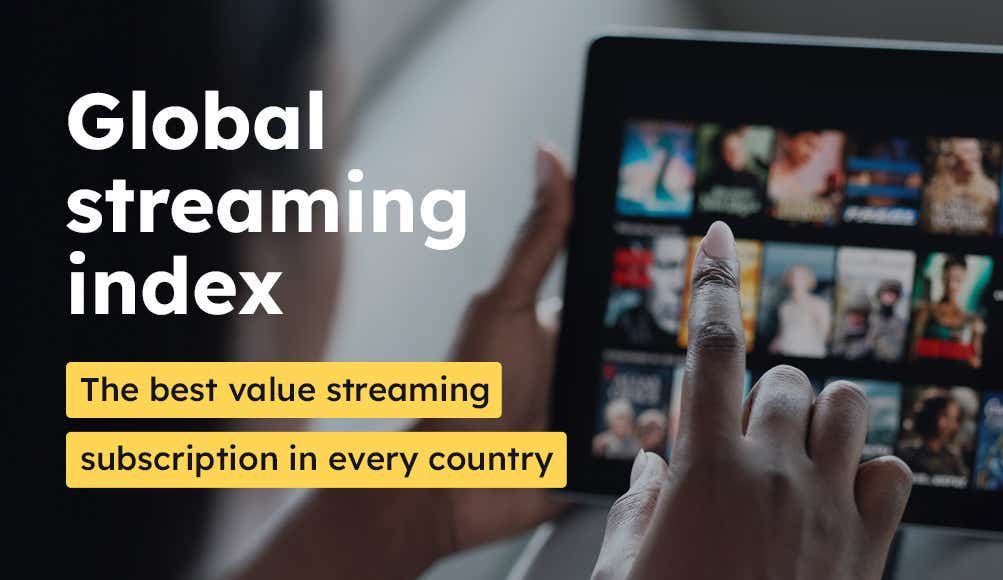 With the price of the world’s most popular streaming platform more than doubling in the last 10 years, we wanted to find out which countries have the best value streaming services.

Looking at the monthly cost and number of titles on Netflix, Amazon Prime Video and Disney Plus, we worked out which countries get the best bang for their buck on each platform.

The best way to stream movies and television shows is with ultrafast broadband - find the best broadband deals online now.

The best country to have a Netflix subscription

In Turkey, the premium tier of Netflix costs £4.17 per month, giving users access to four screens at once as well as Ultra HD streaming quality. Turkish Netflix subscribers can choose from a range of 4,686 movies and television shows, including many popular Turkish language Netflix originals.

Turkey has the lowest priced Netflix premium subscription out of all the countries we looked at. The best value country for a Netflix subscription is also the cheapest country for Netflix on our list.

The best country to have an Amazon Prime Video subscription

Jamaica is the best country to have an Amazon Prime Video membership in terms of value for money.

Those in Jamaica pay £2.41 per month for access to Amazon’s streaming services with 8,350 titles on the platform to choose from.

In Turkey, an Amazon Prime Video subscription costs £0.42 per month, or 7.90 Turkish Lira. The membership gives you access to all Amazon Prime benefits, including next day delivery.

The best country to have a Disney Plus subscription

When Disney Plus first launched in Indonesia, it merged with the country’s dominant streaming platform, Star India’s Hotstar, instantly boosting its popularity. Today, a monthly subscription to Disney Plus Hotstar in Indonesia is the cheapest on our list, and gives you access to 1,581 titles including Marvel, Disney and HBO originals.

The cheapest Disney Plus subscription

Disney Plus operates as Disney Plus Hotstar in Indonesia, following the merge with the Hotstar streaming service. For the equivalent of £2.16 a month, you can access Indonesian-language content and Disney originals.

The best value streaming service around the world

The best value streaming service in the UK

The best value streaming service in the USA

Streaming services with the most content around the world 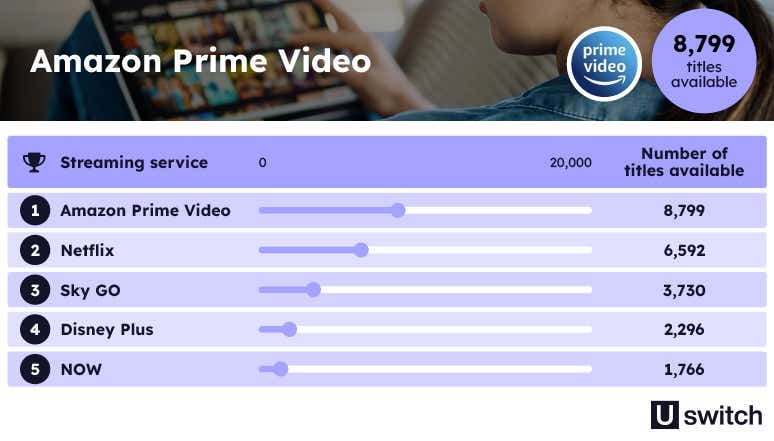 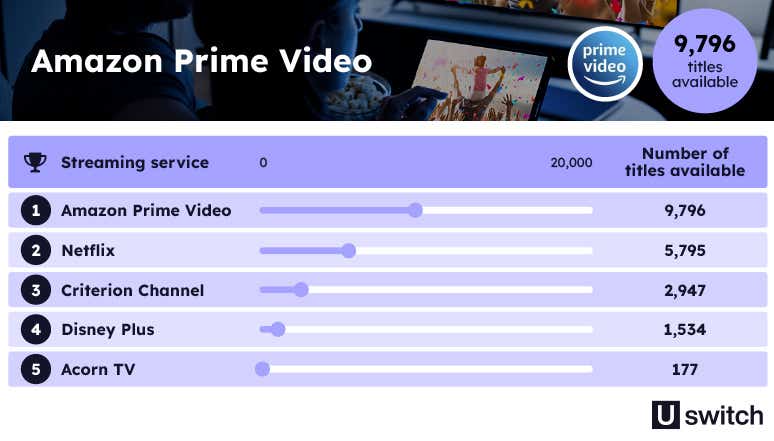 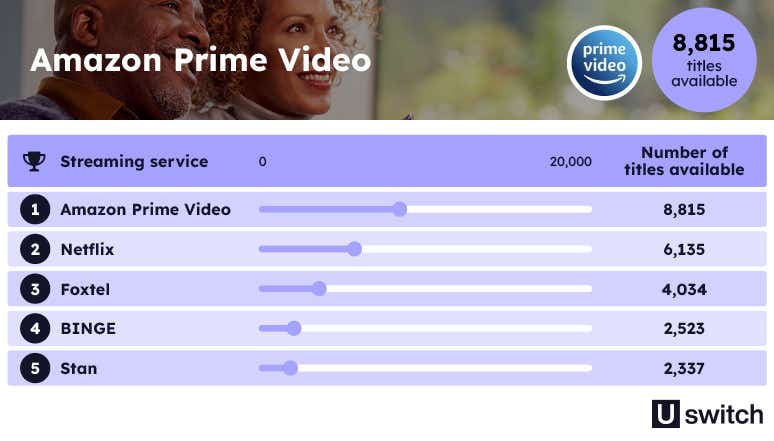 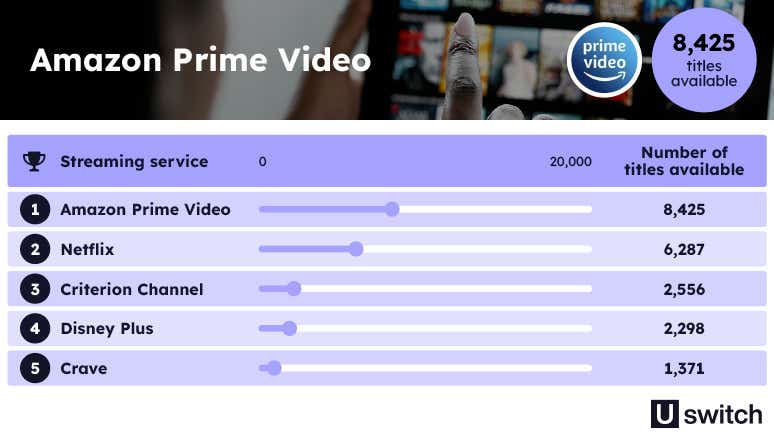 In Canada, Amazon Prime Video is the best streaming service in terms of variety. The platform has 8,425 titles to choose from, compared to Netflix which has 6,287.

The best free streaming service in the US

Tubi TV has 35,808 titles for US subscribers to watch for no cost at all. The service is ad-supported, playing commercials before and during TV shows and movies. Out of all the free streaming services available in the US, Tubi TV has the most content.

The best free streaming service in the UK

Amazon Freevee, previously known as IMDb TV, is available within the Prime Video app for users with a free Amazon account. With 3,009 ad-supported titles, users from the UK can access original TV series and documentaries. Of all the free streaming services available in the UK, Amazon Freeve has the most titles.

Kanopy is a free streaming service in Australia, available for users with a library card to access an online library of mostly educational TV series and documentaries. Kanopy also has a wide range of foreign films, independent films and experimental projects.

Tubi TV is the best free streaming service in Canada for the number of titles available. Canadian users have access to 18,389 titles on Tubi TV.

“With the costs of living rising, many households are deciding to cut back on their streaming subscriptions in order to save money. For those choosing between which streaming services to continue to subscribe to, there are a few things to consider, such as the number of available titles per platform and monthly subscription costs.

“The research reveals that, for UK streamers, Amazon Prime offers both the best value for money and the highest variety of content. However, one way to save money is to unsubscribe from all paid streaming services and use free platforms instead. From All 4 to BBC iPlayer, there are thousands of free shows to watch online, with Tubi TV revealed to have the most content to pick from!

“However, if you don’t intend to stop streaming any time soon and want to save money elsewhere, be sure to compare cheaper broadband options as an alternative way to save yourself money. It is also vital that your broadband offers a strong connection. A fibre connection of 30Mbps or more will provide for a buffer-free movie experience, allowing you to relax, sit back with your popcorn, and enjoy the on-screen masterpieces.”

Streaming TV or any other media refers to transmitting audio and video files via the internet to a device such as a laptop, mobile phone, or smart TV. Unlike downloads, streamed content isn’t stored on your device and is streamed instantaneously from the internet, so you’ll need a reliable and fast broadband connection.

This varies depending on where in the world you live and what level of subscription you opt for. Here in the UK, the Basic subscription costs £6.99 per month, or you can upgrade to a Standard subscription for £10.99 and Premium for £15.99.

If you’re streaming content on a mobile device, you’ll want to be aware of how much mobile data streaming could be using. For example, Netflix uses around 1GB of data an hour for standard definition content and up to 7GB an hour for 4K Ultra HD. If you’re worried about how much data streaming is using, you might want to download your content to your device first using Wi-Fi.

To get set up for live TV streaming, the first thing you’ll need is a reliable broadband connection and it’s recommended that you have a speed of at least 3 Mbps for standard definition and up to 25 Mbps for 4K HD. You’ll also need one of the following: a streaming device such as a Fire TV Stick, a smart TV, or a gaming console. Finally, you’ll need a subscription to a streaming service such as Netflix, Prime Video, or Disney+.

We sourced the monthly subscription price for Netflix from Netflix in each country. We used the price of the premium Netflix tier for each country. All information is accurate as of 05/05/2022.

All currency values were converted to GBP using XE on 5/5/22.

All currency values were converted to USD and EUR using XE on 17/5/22.

We sourced the number of titles on Netflix, Amazon Prime Video and Disney Plus from Justwatch.

Nick is the content editor for Uswitch's telecoms products, writing about and appearing in the media as a spokesperson and expert on broadband and TV services.He's covered annual broadband price increases and quarterly Ofcom complaints data, as well as all the latest TV releases and how to watch the football on TV for the best price.

Nick has recently been featured and quoted in several high profile publications including BBC, Techradar and Virginradio.

Visit the Uswitch press centre for our latest news.