TikTok rich list: These are the highest-earning car influencers on TikTok

With car influencers rising in popularity on TikTok, the experts at Uswitch sought to investigate which “carfluencers” are earning the most per post on the app.
Share this guide

Car influencers are on the rise on all social platforms, particularly popular video-sharing platform TikTok. These influencers, typically young drivers, post video clips of themselves driving around in supercars, collaborating with other influencers, and showing off the latest car releases, with each clip drawing thousands of views.

Interested in finding out who are the highest-earning car stars on TikTok, Uswitch assessed the number of followers, likes per video, and engagement rate of the most popular car influencers. These findings were used to establish who could earn the most on the app and which “carfluencer” has the highest engagement rate. 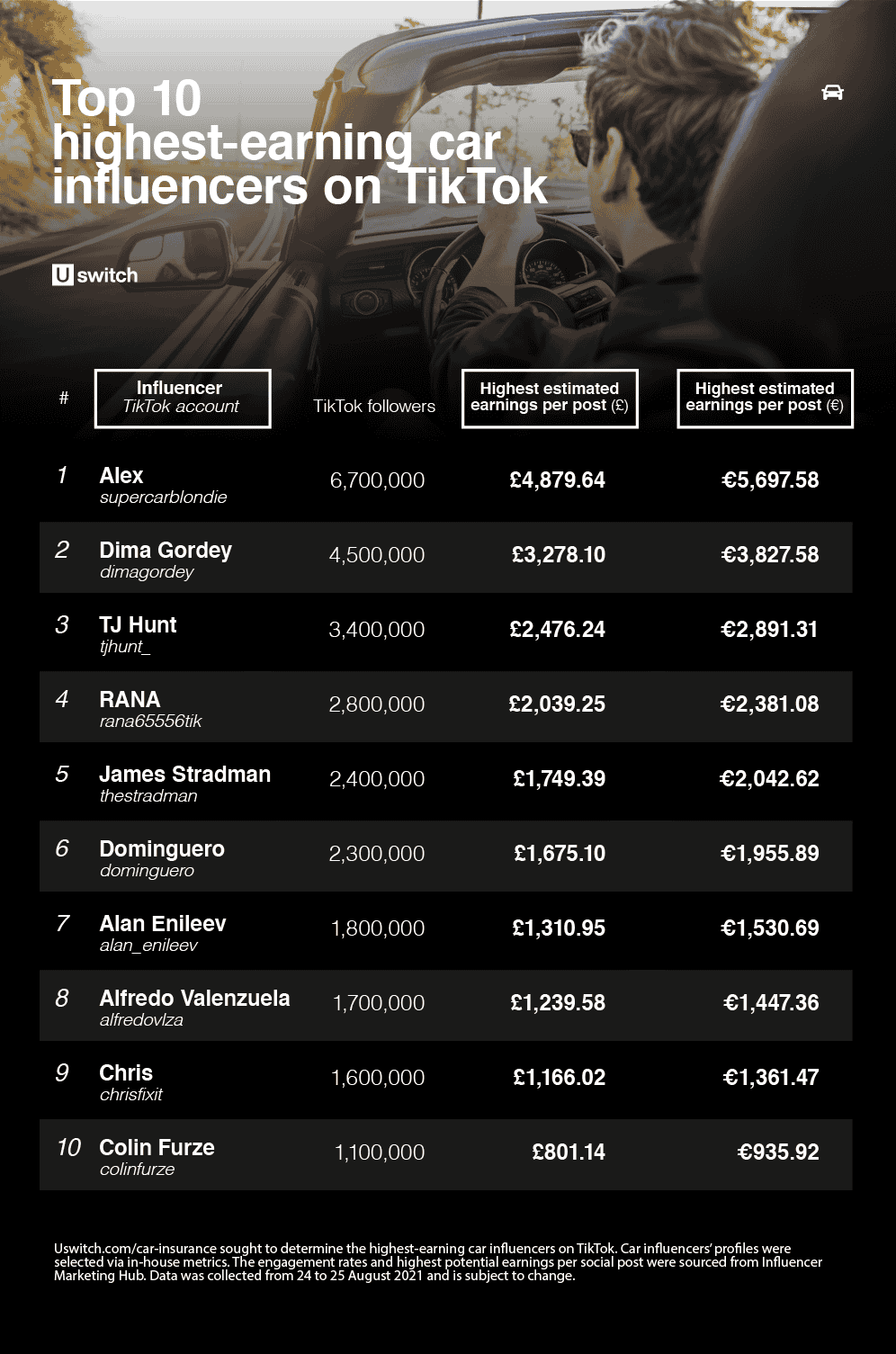 In first place, with the most TikTok followers and the highest estimated earnings per post, is Alex – more famously known as ‘supercarblondie’. Living up to her name, she regularly drives supercars on her account, including Lamborghinis. According to our research, Alex could earn £4,879.64 (€5,697.58) per post on her popular account.

Dima Gordey is next with estimated earnings of £3,278.10, or €3,827.58, for a sponsored post. The Russian-born car influencer has over 4.5 million followers on TikTok, with an additional 5.5 million on YouTube and 3 million on Instagram.

TJ Hunt posts videos recreating Fast and Furious scenes, showing the inner mechanics of expensive cars and collaborating with other car influencers. These short clips have helped him pick up over 3.4 million followers and potential earnings of £2,476.24 (€2,891.31) per post.

Alan Enileev (alan_enileev) and Alfredo Valenzuela (alfredovlza) are two more TikTokers who could earn a fair amount of money per post. Due to the number of followers they both have on the platform, they could charge more than £1,000 for a video.

Another “carfluencer” taking advantage of the three-minute video feature on TikTok is chrisfixit, a TikToker who shares car transformation videos and handy tips to modify your car. From creating these videos, Chris could make £1,166.02 (€1,361.47) per post.

Colin Furze (colinfurze) regularly shares his unique inventions with his one million followers – including building a James Bond car. According to our analysis, he could pocket around £801.14, or €935.92, per post on TikTok. 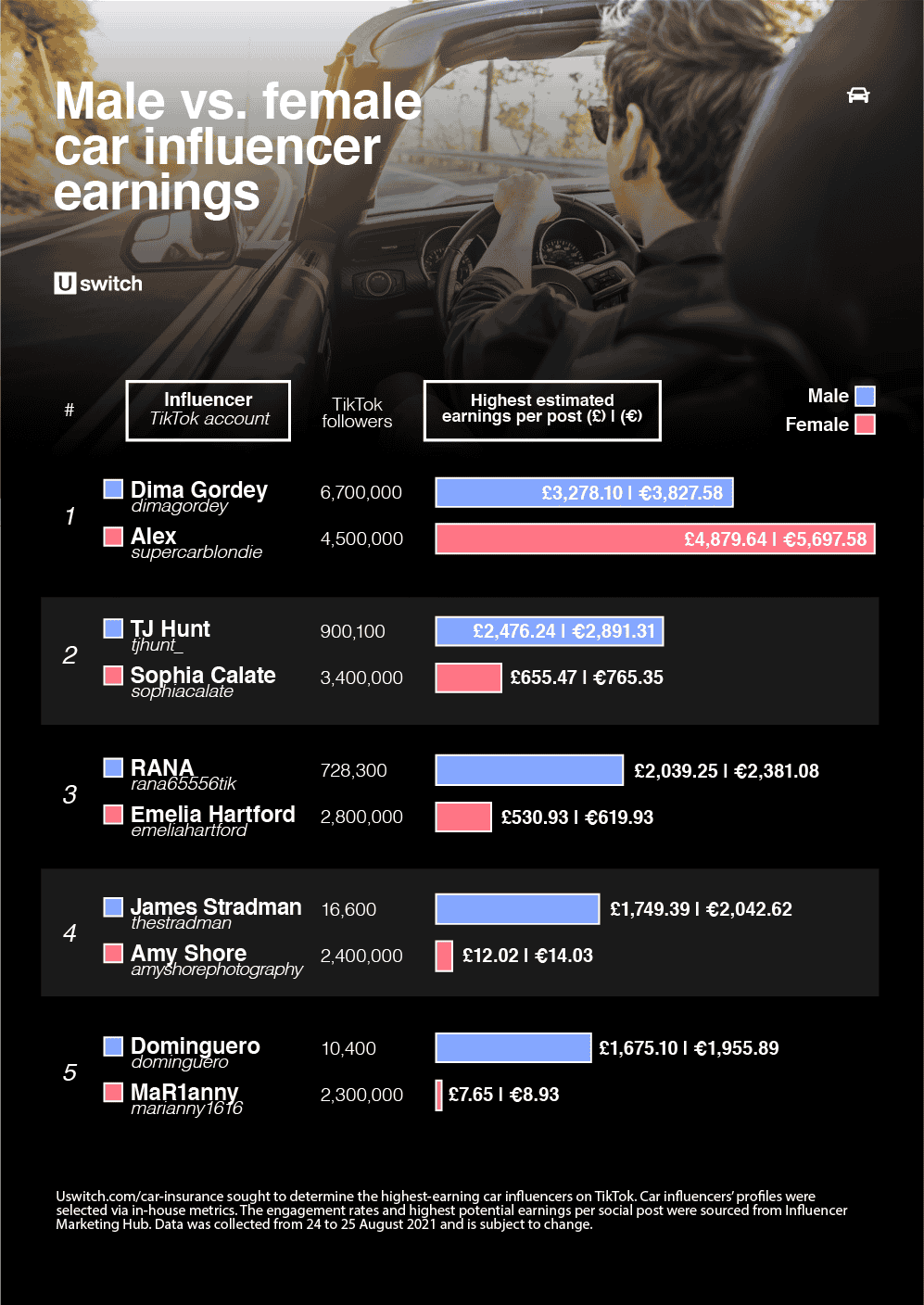 Long gone are the days where cars were considered a boy’s toy. Female highest-earning car influencer supercarblondie could earn over £1.6k more than the top-earning male car influencer on TikTok, Dima Gordey.

Thereafter, the top five biggest male car influencers out-earn their female counterparts. The most obvious difference comes from second place, with tjhunt_ vs sophiacalate. Whilst TJ could earn £2,476.24, Sophia’s potential earnings are £655.47 – a difference of £1,820.77! 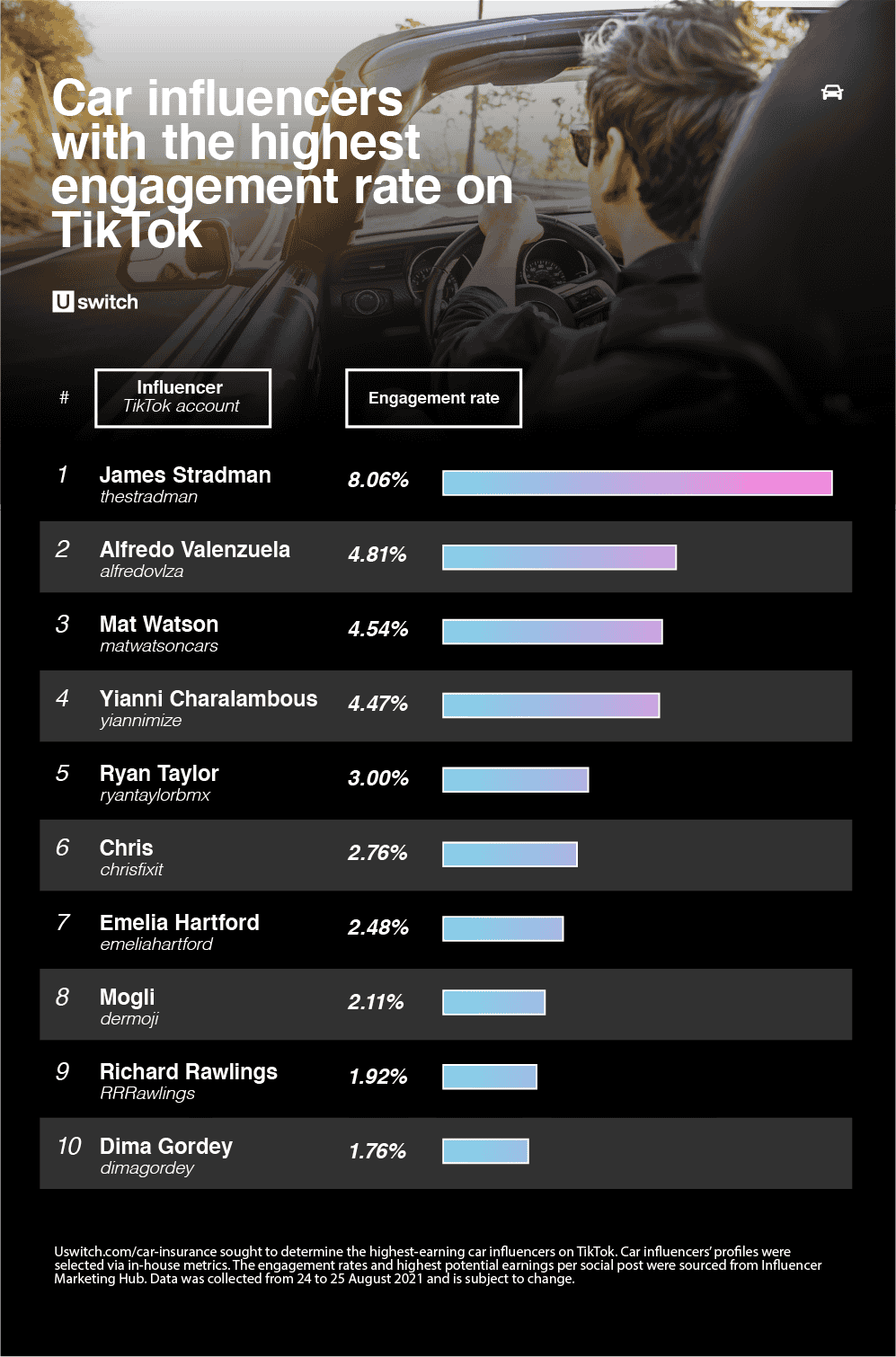 TikTok popularity isn’t just about the number of followers, but also how much these individuals engage with posts. This can be through likes (or ‘hearts’), or comments on videos. With over 200 million users on the app, the competition for these sought-after likes is fierce.

Although he doesn’t have as many followers as some other car influencers, James Stradman has the highest engagement rate at 8.06%. On average, he gets 193,500 likes on each of his first 63 videos.

Alfredo Valenzuela, Mat Watson, and Yianni Charalambous follow behind in second, third and fourth place respectively, with engagement rates of 4% and above.

Surprisingly, despite Alex of supercarblondie earning the most per post, she doesn’t make the top 10 car influencers with the highest engagement rate. Alex’s engagement rate of 0.96% misses out on the top spot by a whopping 7.1%. 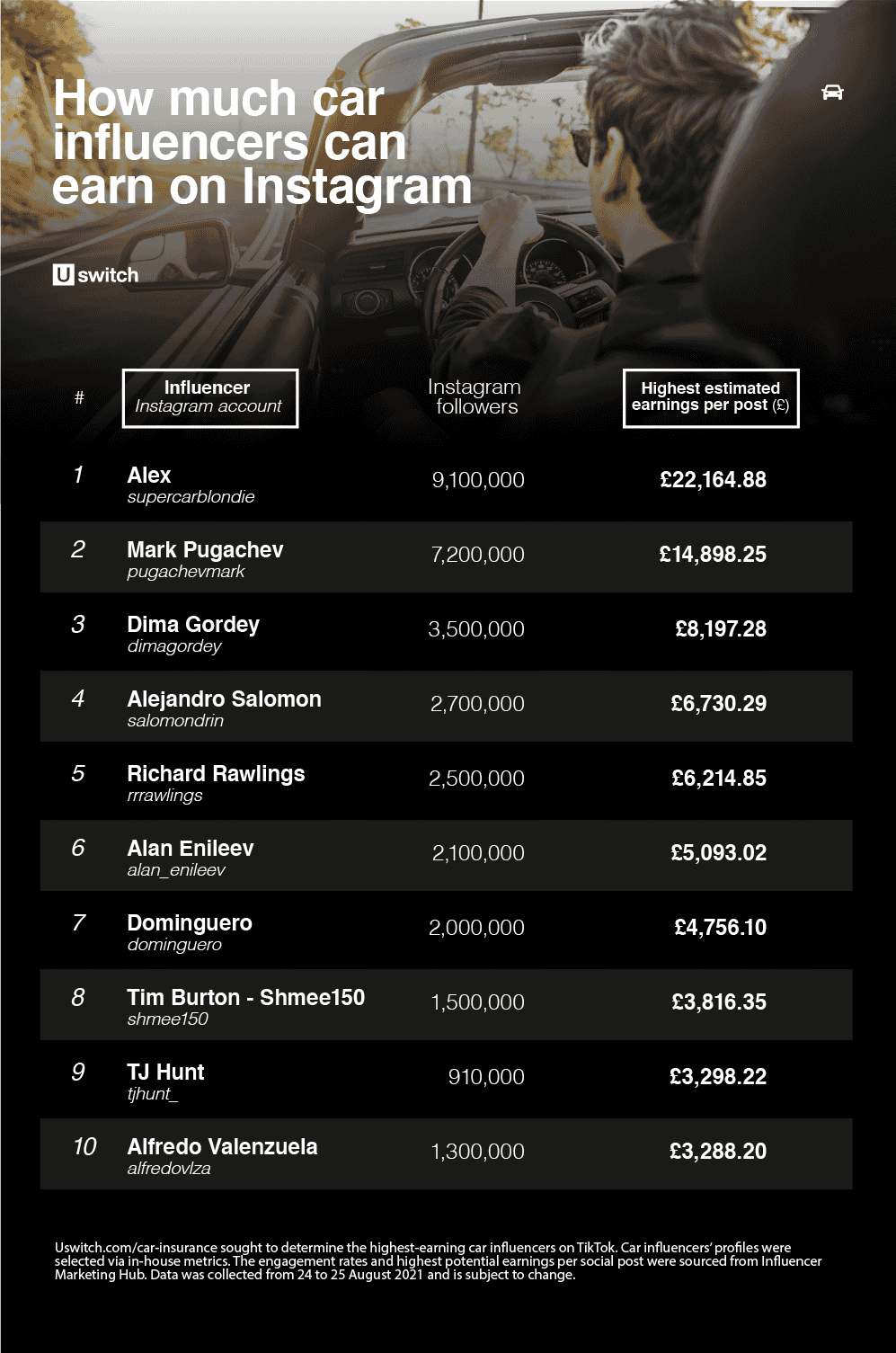 TikTok is not the only social media platform you can earn a living from. If you have plenty of followers elsewhere, you could have multiple incomes from your online presence. For example, Instagram pays some of the creators in ad revenue that can be paired with the money they make from brand collaborations and endorsements, resulting in annual income in the millions for some.

The top three highest earners on TikTok (Alex, Dima Gordey and TJ Hunt) could also collect an impressive paycheck from Instagram. This is especially true for Alex (supercarblondie), whose estimated earnings are a whopping £22,164.88 per post.

Whilst Mark Pugachev could earn £14,898.25 on Instagram, he doesn’t have the same dominance on TikTok. His pay packet from the video-sharing platform stands at just £59.36 per clip.