I swapped my S7 Edge for the new Huawei P20 Pro

Luigi Palazzolo - 11 May 2018
Comment
Share
Tweet
I traded in my trusty old Samsung for the shiny new Huawei P20 Pro. Here's how I got on.
In partnership with

When I got my Samsung S7 Edge two years ago, it was the best phone on the market. Fast-forward to 2018, however, and things have definitely moved on.

Having said that, it’s still a great phone and I’m very attached to it. So it was with mixed emotions that I agreed to swap my trusty old S7 for the new Huawei P20 Pro.

Getting started and first impressions

Last time I set up a new phone, I was unboxing my then-shiny new S7 Edge. And it took forever to transfer all my content across.

So, needless to say, I was prepared to lose my entire afternoon to the hassle of moving my content across. But to my surprise, getting started on the P20 Pro was actually a pretty painless experience.

When I fired up the P20 Pro for the first time, I was given the option of using an Android transfer app to copy all my data across to the new device. But because I’m pretty wedded to my Google apps, I chose the “set-up as new device” option and logged into my Google account when prompted.

Within ten minutes, I had all my old apps installed and all my photos were accessible through the pre-installed Google Photos app.

I like to keep a backup of my text messages and calls. For this I used an app called SMS Backup and Restore. Once it was installed on the P20 Pro, I only needed to hit “Restore” to see all my old messages and call logs within minutes.

WhatsApp takes care of itself once you log-in and reassign your number. This takes seconds.

After about 20 minutes of messing around with logging in to accounts and apps, I was ready to put my old Galaxy in a drawer for a few days.

Registering my fingerprint for the scanner on the P20 Pro was speedy, so I decided to give the face-unlock a try.

I was a bit sceptical, having tried the same feature on the Galaxy S9 and come away distinctly unimpressed.

So I was surprised to see that on the P20, face unlock is consistently fast and reliable. In fact, it’s actually even speedier than the fingerprint scanner.

The hardware and how it feels

The handset the P20 Pro most resembles is the iPhone X. It’s a big, premium phone with a shiny body and an attention-grabbing screen. And, of course, it’s got the iconic notch at the top of the screen to house the front-facing camera and speaker, too. It’s every inch a 2018 flagship.

The phone comes in a range of glossy colourways and features a smooth, aluminium finish. For clumsy or cautious users, a free transparent rubber-case is included in the box. Which is very handy if you’re worried about it slipping out of your hand.

It was a relief seeing that the P20 Pro has an IP67 rating, making it dust and waterproof.

Simply put, I can give it a clean with a wet wipe or a quick rinse under the tap and it’ll come out right as rain. But I’m advised not to submerge it underwater for a prolonged period of time. Which is perfectly reasonable. 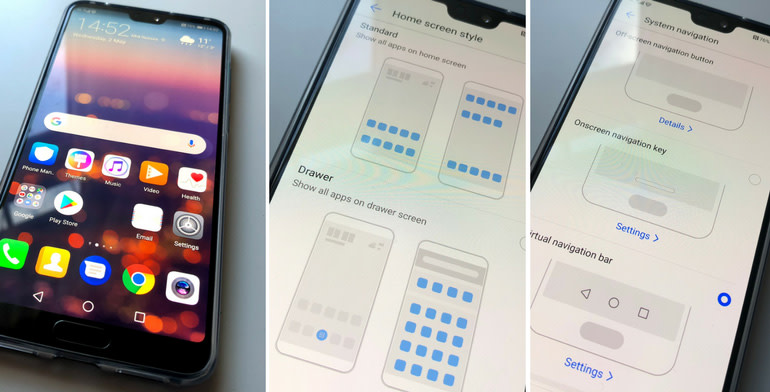 The Huawei home-screen is quite different to that on my old Samsung S7 Edge. So much so, it actually took me a little while to figure out where all my apps had gone.

Instead of the dedicated apps button on the S7 Edge that brings up all my widgets in one go, Huawei has organised everything into neat little folders. Which gives you a tidy and intuitive layout.

But, if you’re stuck in your ways like me, all you need to do is go to the settings and add the traditional apps drawer back in.

Meanwhile, the home button itself is a bit of a revolution to me. For someone used to the satisfying click of a well-designed mechanical button, the no-click one used by the P20 feels a little strange to start with. But it’s certainly fast and reliable both as a navigation tool and a fingerprint reader.

In its default setting, the P20 has the familiar “Back, Home, Apps” buttons on screen. But if you want an iPhone X-style experience, you can go through the settings to eliminate these virtual buttons. Once you’ve done this, you’ll then be able to navigate with a series of intuitive swipes and gestures instead. 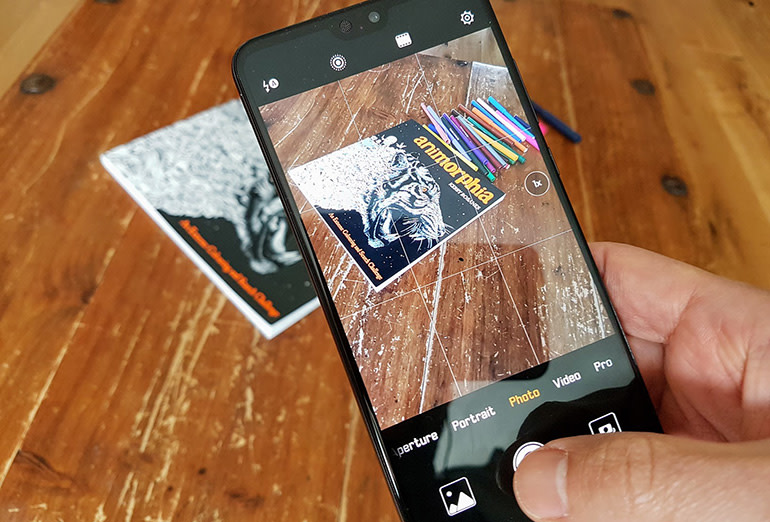 The S7 Edge has an amazing camera and I was certain I would miss it. But I needn’t have worried.

After all, with a staggering triple-lens setup, the brand-new P20 Pro was always going to out-do my 2-year-old S7 Edge. And even I, loyal as I am to my old Samsung, was wowed by the difference between the two phones.

The P20 Pro’s camera is very straightforward to use and extremely responsive. And it even gives you tips, such as suggesting you steady your device, to ensure you get the best possible results.

Better still, the P20 Pro comes with some very smart Artificial Intelligence that identifies the subject of your photo and automatically changes the mode to help you get the perfect photo with very little effort.

So, if you’re taking a photo of your pet kitten, it’ll switch on Cat Mode. Trying to capture a sunny scene? Blue Sky Mode will activate automatically. Or if you’re snapping a photo of your latest culinary triumph, it’ll select Food Mode to make your meal look extra delicious.

All of this conspires to give you flawless photos without any technical know-how. And you can even put a “#nofilter” at the end of your Instagram posts, knowing that your phone has already pre-selected the ideal mode for your image.

Elsewhere, I was intrigued by the Monochrome Mode and spent some time experimenting with it. And I must say the richness of the detail, even in poor lighting conditions is the best I have seen in any phone, and utterly eclipsed anything I’ve ever managed to capture with my old S7 Edge.

Just on the camera alone, my loyalty to my old phone is waning. My photos look so much better.

Huawei’s latest phone coped surprisingly well with being starved of charge, showing over 45% battery after a full day of light use and a night on standby. Which is actually even better than my trusty S7.

Switching to a new phone, particularly one made by a different manufacturer, can seem a bit daunting. But it’s actually a lot less hassle than you think. I was up and running on the P20 Pro within about 15 minutes.

And the rewards for switching have been more than worth the effort it took to insert my SIM into the new phone and transfer my content.

Even though my S7 Edge is only two years old, smartphones have undoubtedly moved on considerably since 2016. And as the P20 Pro’s array of cutting-edge features attest, Huawei is clearly at the forefront of innovation in the smartphone world.

Face-unlocking is amazingly fast, far better than Samsung’s facial recognition tech and Apple’s FaceID. And the big, bright infinity display is a significant upgrade from the S7 Edge’s smaller screen, which is hampered at either end by chunky bezels that are now distinctly out of fashion.

And of course, front and centre is the incredible triple-lens camera. As a bit of a photography enthusiast, I was eager to see if the P20 Pro would live up to the hype. It actually surpassed anything I have ever seen from a smartphone, with an incredibly detailed zoom and low-light results that prove this device can truly see in the dark.

So would I be happy to swap my Samsung for the Huawei P20 Pro? Well, I never thought I’d say this. But yes, In a heartbeat.

Do Huawei's latest handsets live up to the hype? We find out.