iPhone £25 battery replacement programme review: is it as good as it sounds?

Joe Minihane - 01 February 2018 Last updated: 06 December 2019
Comment
Share
Tweet
Joe Minihane took his ageing iPhone 6 in for a new battery. Here's how he got on with getting an appointment and how his ageing phone is performing now.

As the owner of a three-and-a-half-year-old iPhone 6, my battery has been on its last legs for a long time now.

For the last 12 months or more, I've come accept to a few short hours of battery life as the norm.

Not up to speed with Apple's £25 battery replacement scheme yet? Here's everything you need to know.

I ran out of power so often that I took to travelling with a charger permanently about my person.

Go without, and the dread of being without my beloved smartphone would rise throughout the day until I was left using airplane mode to eke out the final minutes of a podcast or some downloaded tracks on Spotify.

Considering I cover the smartphone world on a daily basis, I’m ashamed at how I normalised the fact that my ageing device was becoming virtually unusable.

New iOS updates made it slower and burned through battery faster.

At least four times a week my battery percentage would slide to 1% but somehow keep ticking for a few more hours. Worse, random shutdowns had become a weekly occurrence.

Help was at hand, though, in the form of Apple's offer to replace batteries on ageing phones for £25 - down from £79 previously.

The replacement scheme was launched after Apple admitted slowing down older phones to prevent shutdowns in handsets with eroded batteries.

Having considered a costly upgrade to the well reviewed iPhone X, I decided a new battery might help me save up a little longer. And so I decided to take the plunge.

Think you're ready to upgrade to an iPhone X? Here's our pick of the best deals up for grabs right now.

On Tuesday 23rd January I visited Apple’s website and found an appointment that morning for a battery replacement at my local store.

Flying in the face of reports about two-month long delays due to battery shortages and massive demand, I was all set to head out when a friend mentioned that he’d done the same, only to find Apple had no iPhone 6 batteries in stock.

I phoned ahead. As suspected, there were no batteries available. And although Apple could order one in, they couldn’t give me an exact date for its arrival in store.

All they could say was that it would be three working days until I heard from them.

Two days on I received an email saying a battery had been ordered and that it could take another fortnight for it to arrive.

By this point I’d had another battery fail on a train journey and seen my phone die a quarter of a mile shy of the seven-mile target I’d set on a training run.

Yet by Monday 29th January, I had an email saying a battery was in stock and ready to be fitted.

On 30th January, I visited the extremely busy Apple store in Brighton. 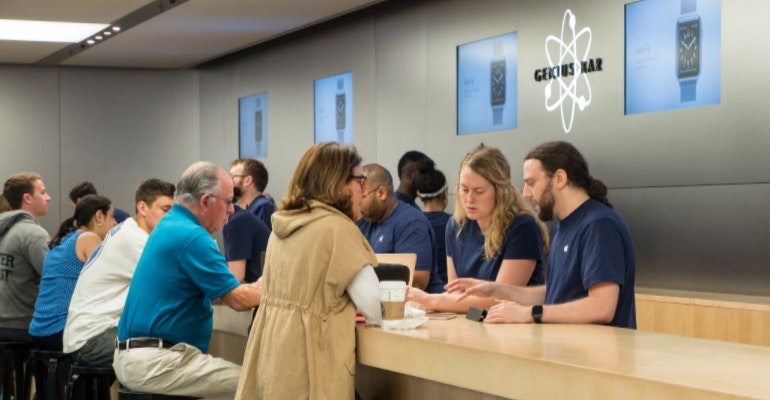 Staff were noncommittal about how many replacements they were doing, but there were at least five others handing over older iPhones when I dropped off my device. The wait of two hours was no issue, but did suggest a backlog.

After marking time for a bit, I was given back a working phone with 30% battery.

This was not a problem, although a spot of light Instagram browsing, some texting, an email check and 30 minutes of tethering saw it slide to 20% in less than an hour.

A further charge though and things held steady, dropping around 8% per hour.

Performance–wise, there was an immediate and noticeable difference.

Chrome, Twitter and Facebook opened quick smart, far faster than they had done in the past year.

The keyboard no longer suffered from nasty lag while typing out emails, while Nike Running Club finally let me set distances without having to wait five minutes for it to warm up.

Much has been made of whether Apple’s battery replacement programme will cause iPhone users to hold off upgrading.

In my case, it’s a tentative yes. Although it cost £25, my iPhone 6 feels a lot fresher than it has done in months.

The proof will come when further iOS updates cause more slowdowns, and whether Apple’s planned battery health feature, due with iOS 11.3, really does the job.

The wider question, though, is whether Apple can regain the trust of consumers.

And past failures, such as the now dimly remembered iPhone 4 signal debacle, show that the public are very forgiving when it comes to their most treasured possession.

Is it easy to get a new battery? Yes. Should you give it a go instead of upgrading right away? Certainly. This iPhone addict can attest that it works wonders.

Not sure if you're eligible for the iPhone battery replacement programme? You're able to take advantage, if you've got any of these models: iPhone 6, iPhone 6 Plus, iPhone 6s, iPhone 6s Plus, iPhone SE, iPhone 7 and iPhone 7 Plus.

Think you're ready to upgrade to a new iPhone instead of getting the battery replaced? Take a look at a selection of deals on our comparison page.