Alongside batteries that don’t last you a full day, broken displays are the bane of the smartphone age.

Let’s face it, there are few things worse than seeing a spider-web of fissures and splits splashed across your spanking new phone’s screen.

And there are even fewer among us who haven’t at some stage caused serious damage to our display.

According to O2, some 51% (24 million) of the adult population who own a smartphone have broken their display.

But the good new is that help is at hand.

From today (8th September 2017) customers who sign up for new top-end phones on select O2 contracts get a free screen replacement if they accidentally break them.

So which contracts and handsets are included in the free screen-repair offer? Will it be included on O2’s iPhone 8 contracts when they’re announced? And what happens while the screen is being fixed?

Read on and we’ll explain all.

The offer applies on the all-singing, all-dancing Galaxy Note 8, which you can pre-order but isn’t yet on shop shelves, as well as the Galaxy S8 and S8 Plus.

It’s also on the well-reviewed OnePlus 5, which comes a bit cheaper than those Samsung phones but still offers a great camera and a premium construction.

O2 has also said that “further devices may be added in the future”.

We don’t know for sure. But we reckon that means it’ll likely be a part of O2’s iPhone 8 contracts when they’re announced.

O2’s klutz-friendly offer applies on any 24-month contracts with monthly allowances of 30GB or above.

Want the Galaxy S8 or S8 Plus, those are priced from £55 per month and £58 per month respectively. A £9.99 one-off charge upfront charge applies on those deals too.

And if you like the look of the OnePlus 5, you’re looking at a minimum monthly spend of £41 per month. You’ve guessed it: a £9.99 upfront charge applies here too.

Compare O2 deals for the OnePlus 5. 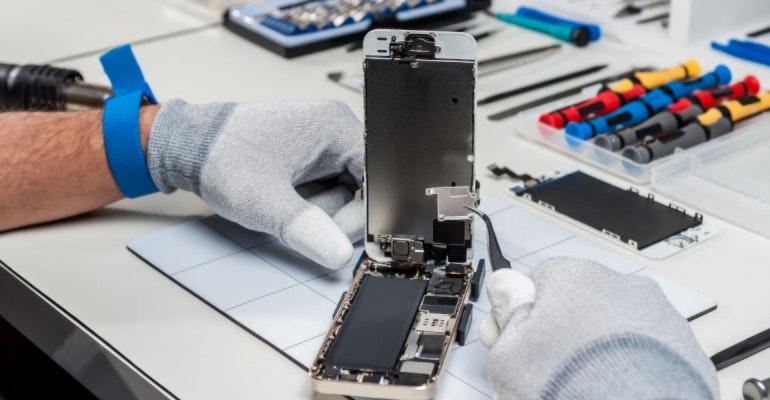 The terms of O2’s offer stipulate that customers will be able to “get their screen replaced once during the 24 months of their contract”.

If you’re especially clumsy or unlucky and break your screen again, O2 will offer you the chance to move to an O2 paid insurance product.

And if you don’t fancy that, you’re advised to head to a trusted, reputable store and pay for your repair.

Once you’ve lodged the claim, a courier will arrive the next day to pick up your broken phone and loan you a replacement to use while your own handset is being repaired.

5 It could be a money-saver

The fact that over half of smartphone users have broken their screens bears out that display mishaps affect most of us. And aren’t just something that happens to other people.

Factor in the fact that new screens don’t come cheap (you’re looking at £100-plus. At least) and the hassle of finding of a trustworthy repair shop and O2’s offer looks like a very welcome sweetener.

Is it safe to use third-party repair shops? We take a look in our guide.

How to avoid being overcharged for your mobile phone contract

Make sure you don’t get charged for your phone after you’ve paid it off.

Want to find out more about O2's roaming charges? We've got it covered.

What is O2 Refresh? 5 key facts you need to know

Freedom comes at a price. But is this one worth paying?

Roaming outside the EU: A network–by–network guide

We take a look at how much UK providers charge for using your phone outside the EU.