Loads of smartphone launch each year, but for most of us there are two main ones to watch out for: the iPhone, and the new Samsung Galaxy S handset.

It’s already four months since the iPhone 13 touched down, so now it’s the turn of Samsung’s next flagship.

The Galaxy S22 is rumoured to launch in the coming weeks, 12 months on from its predecessor, the Galaxy S21. The S21 was one of the standout phones of 2021, so expectations are high for the S22.

It shouldn’t disappoint. If the rumours are right, it’ll boast a super sharp screen, incredible camera and oodles of power. It should even mark a welcome return for the company’s Galaxy Note phones. Read on for everything we know so far...

Like most big phone firms, Samsung launches a new flagship every year without fail. The Samsung Galaxy S21 launched on 14th January 2021, which suggests the S22 should be announced any day now.

Samsung previously announced its new Galaxy S iteration in February or March, usually just ahead of the Mobile World Congress smartphone show that’s held every year in Barcelona. But with coronavirus disrupting the global tech exhibition schedule, that show has been less important for the last couple of years. Hence Samsung has decided to go early, and announce its new flagship in the first weeks of the year. It’s highly likely that will remain the case this year.

New phones typically cost the same or more than the models they replace. It makes sense, seeing as they pack higher specs and more cutting-edge tech into a package that’s cost millions in development costs. But the Galaxy S21 actually cost less than its predecessor, the S20. So could the S22 cost even less than the S21?

Probably not. According to one leak, all three phones in the S22 range will cost more than their S21 counterparts. It only mentions US prices, but we can guess that the UK equivalents will cost more too.

Why? One reason is the global chip shortage. A lack of components is impacting all kinds of products right now, from smartphones and smartwatches to computers and cars. It also led to a shortage of iPhones at the end of last year. When demand outstrips supply, prices inevitably rise. It’s likely Samsung will pass on some of that extra cost to us punters.

If they are looking too pricey for you, never fear. The S21 starts at £769, and will likely be discounted once the S22 breaks cover. Samsung also announced the Galaxy S21 FE recently – it’s very similar to the S21 but with a larger screen, bigger battery and lower price. Both are great options if you want to save some money.

The big rumour doing the rounds is that the S22 range’s screens will actually be a little smaller than the S21’s. According to renowned leaker Ice universe (posting on Chinese social media site Weibo), the standard S22 will have a 6.06-inch screen, down from 6.2 inches on the S21. The S22 Plus is expected to have a 6.5-inch screen (down from 6.7 inches) and the S22 Ultra a 6.81-incher (down from 6.9 inches).

Wondering how they will look? YouTube channel Unbox Therapy has placed them side-by-side using dummy units. Though the video has since mysteriously disappeared. Were they too close to the truth...? 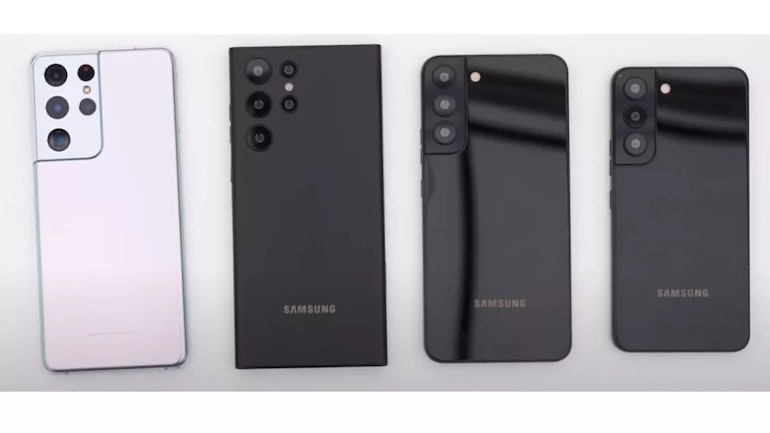 The S22 Ultra is expected to have not only the biggest, but the best screen of all three handsets. SamMobile claims it will reach 1750 nits brightness – that’s significantly brighter than the 1500 nits seen on the S21, so expect colours to have more ‘pop’ and images to be clearer in bright sun. It’s thought to be the brightest screen ever seen on a Samsung Galaxy phone.

The S22 Ultra is also thought to support variable refresh rates. That means it can handle the fast action with no blurring, and then drop down to a lower refresh rate (thought to be as low as 1Hz) when showing more static content to conserve battery. Like the S21 family, the S22 range’s refresh rate is expected to top out at 120Hz.

For the most part, the S22 family will look a lot like the phones in the S21 range, with one exception: the S22 Ultra. According to leaked images, it will look more like the now-discontinued Galaxy Note range of phones, with squared-off corners and no separate camera housing on the back.

It’s also through to have a slot for the stylus, so you can write and draw on screen without worrying about where to put it.

Samsung didn’t release a new Note phone in 2021, so rumours abound it will be incorporated into the galaxy S range. The Note popularised the big-screen nature of today’s smartphones (the 2011 original was 5.3 inches, which was considered massive at the time). We hope such a landmark phone can be kept alive in some form or other.

The S22 design features a major camera bump on the back with five lenses, slimmer bezels and a flat, rather than curved, display.

It’s also said to have a selfie camera built under the screen, though that rumour has been doing the rounds for years now. We wouldn’t count on it.

Samsung’s smartphones feature some of the best cameras around, so we have high hopes for the S22’s imaging abilities. And if the rumours are on the money, we won’t be disappointed. 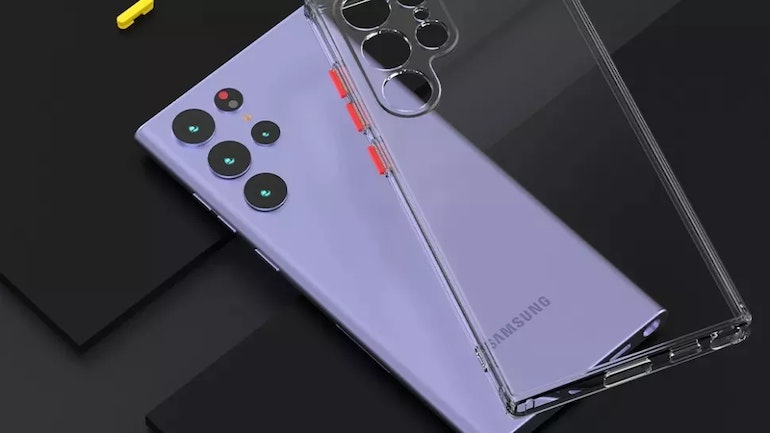 Not only is it thought to feature five rear lenses, it’s also thought to be made in collaboration with camera giant Olympus. This wouldn’t be the first camera/smartphone team up we’ve seen – think OnePlus and Hasselblad, or Nokia and Carl Zeiss – but the prospect is still very enticing indeed.

The same 108-megapixel sensor as the S22 is thought to return, though the S22 Ultra is expected to have a significant upgrade thanks to a Super Clear lens. This should reduce glare and reflections while providing more image detail.

The phones are thought to feature dual 12-megapixel ultra-wide and telephoto lenses.

Another rumour says that the star of the show will be a new 50-megapixel sensor made by Samsung. This is thought to use larger pixels, so the lower resolution wouldn’t impact image quality. It could also result in a smaller camera bump and better low-light performance.

Google’s Pixel 6 uses similar tech – in fact, it could even use the same sensor. As well as offering full-resolution 50-megapixel photos, it can produce 12.5-megapixel stills using a process called ‘pixel-binning’. These smaller images would take up less space on your phone while also offering greater brightness.

The S22 is expected to run Samsung’s latest Exynos processor, which it will unveil on 11th January, according to 9to5Google. Which would set the stage nicely for an S22 announcement.

Alongside that should come a new graphics processor that uses AMD’s RDNA 2 architecture. That’s the same basis as the graphics brains of the Xbox Series X and PS5. While it wouldn’t make the S22 the equivalent of those machines in terms of gaming prowess, it would certainly establish it as a major player in terms of gaming handsets.

The battery capacities for all but the S22 Ultra are said to be lower than their S21 counterparts, but thanks to the more efficient chip, we’re sure we’ll see some gains in terms of battery life. Wireless fast charging is also on the cards, as is no microSD card slot (as was the case on the S21 family). With cloud storage at your disposal, who needs it? 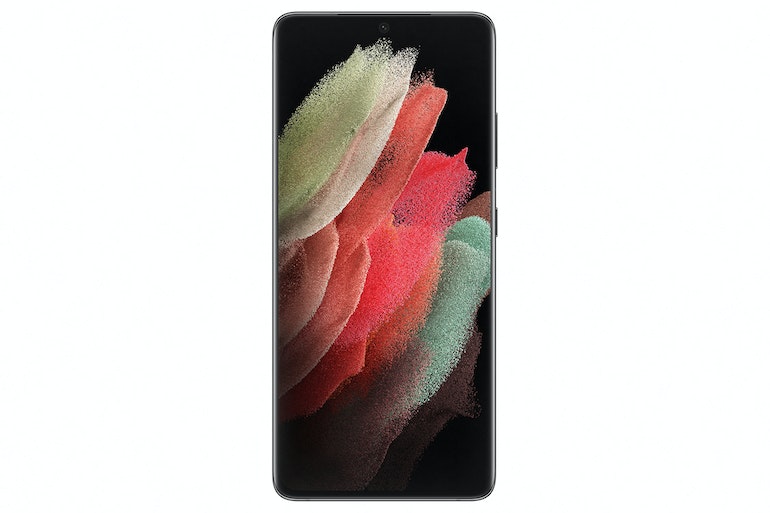 The S22 looks like a mighty exciting prospect. Better screens, more power and the return of the much-loved Galaxy Note – what’s not to like?

Samsung always offers plenty of pizzaz with its launch events, and we’re sure the S22 will be no different. Stay tuned for all the official details as soon as they break.