Well, the much-anticipated Samsung Galaxy S8 is finally here. And it’s definitely been worth the wait.

But, as you’ve probably guessed, the Galaxy S8 is a premium phone at a premium price. And, with the brand-new S8 expected to hit shelves on 28th April, you’ll be able to get last year’s S7 at a bargain price.

So, is it worth paying the extra to get an S8? Or is it just not different enough to last year’s model to justify the additional outlay?

Read on and we’ll explain the differences between the last year’s models and the shiny new S8 and S8 Plus phones and help you decide which one you need.

Want to see you the latest Samsung compares to last year's iPhone? Check out our head-to-head between the S8 and the iPhone 7.

The curved screen used for Samsung’s Edge range is now standard across both S8 handsets, meaning that there’s no such thing as the S8 Edge. Instead, the top-of-the-range version of the S8 has been dubbed the S8 Plus.

The big difference between the S7 and S7 Edge is that the S8 and S8 Plus’s display takes up the entire front the phone. Tagged as an ‘infinity screen’, it means that Samsung can incorporate larger screens in its phones without making the phones themselves any larger.

And Samsung has put all that extra display space to good use, with a handy multi-tasking mode that lets you have multiple windows running on your screen simultaneously. And videos and photos look great on them too.

Both phones are about as thick as last year’s models, probably due to the fact that Samsung has decided to fly in the face of current smartphone trends and keep the headphone jack. This will no doubt curry favour with fans who don’t want to fork out for an expensive pair of wireless earbuds to go with their new phone.

Despite the headphone slot, both the S8 and the S8 Plus are extremely lightweight and feel easy to use one-handed.

Samsung has dispensed with the traditional, physical home button, instead embedding one into the screen. The fingerprint scanner is now placed around the back of the phone, making even more room for the infinity screen.

The S7 and S7 Edge both come with a fingerprint scanner built into the home button. By getting rid of a physical home button on this year’s flagship phones, Samsung has had to move the scanner to the back of the phone next to the rear camera lens.

More interestingly though, Samsung has added an iris scanner and facial recognition tech to the S8 and S8 Plus. The phone manufacturer first featured this biometric-security feature on the Galaxy Note 7 handset, so it’s no surprise to see it on this year’s S8 range.

The use of iris scanning and facial recognition has given the S8 and S8 Plus perhaps the very best security currently available. If it works as well as Samsung claims, you can expect to see competitors follow suit, possibly bringing about the end of the fingerprint scanner as we know it.

Both the S7 and S7 Edge come with an impressive 12-megapixel dual-pixel camera.

The S8 and the S8 Plus also come loaded with a 12-megapixel rear camera that utilises dual-pixel tech. But winningly, they also have a large F1.7 aperture that lets in more light for better performance in low light conditions.

The handsets also use multi-frame image processing. This means that for every photo you take on the S8 or S8 Plus, the camera will actually take three shots. It then uses blurring technology to meld them together. The result is much sharper and brighter images.

If you’re a fan of taking selfies, you’ll definitely want to update to this year’s flagship. Samsung has given its front-facing camera a much-needed update from the 5-megapixel shooter on the S7 and S7 Edge to a much more respectable 8 megapixels.

Last year’s flagship phones come with a choice of 32GB or 64GB of storage. The S7 Edge is also available with 128GB capacity.

Interestingly, Samsung seems to be moving away from offering different storage options, as both the S8 and the S8 Plus only come with 64GB. Which is still plenty of storage for most smartphone users, but does mean that there won’t be a smaller, more affordable option for users who don’t want lots of storage.

If you’re a so-called ‘power user’ and you need more space than 64GB, both S8 models let you add up to 256GB of additional storage with a microSD card.

In terms of battery life, there’s not all that much difference between this year’s Samsung flagship and last year’s.

Both the S7 and S8 come with a powerful 3000 mAh battery, while the S7 Edge’s 3600 mAh battery is actually a bit more beefy than the S8 Plus’ 3500 mAh. However, the battery-optimising properties of the Android Nougat software of both S8 phones means they won’t let you down.

All four phones are compatible with wireless charging and come with fast-charging modes.

Again, there’s not much difference between the latest Samsung and last year’s model when it comes to waterproofing. All four models come with IP68-rated waterproofing, which means the phone can survive in up to 1.5 metres of water for up to 30 minutes.

They are also protected from dust, dirt and sand without the need for a cover.

One thing that really sets the S8 apart from all Samsung phones that have come before it is Samsung’s brand-new voice assistant.

Meet Bixby. The result of a tie–up with artificial intelligence (AI) firm Viv Labs, Bixby is one of the smartest voice assistants we’ve come across.

More ‘context-aware’ than Siri and Google Assistant, Bixby will use your location and what’s on your screen to work out what you’re asking it to do.

It’s worth noting that at launch Bixby will only understand Korean and American English. We’ll have to wait for an update later on this year before it understands UK English.

At the moment, Bixby is only compatible with a selection of Samsung apps. But apparently it will be updated to work with third-party apps in due course.

With improved AI, for us Bixby definitely outranks Google Assistant, which has been added to the S7 and S7 Edge as part of the Android Nougat update.

The processors in the S8 and S8 Plus are broadly in-line with last year’s models, although the graphics processing unit has been improved by up to 20%.

Watch out for our in-depth review where we’ll suss out just how good the graphics are on the S8. And how zippy they are to use too.

The S8 and the S8 Plus will be launched with Android 7.0 Nougat, but will presumably be one of the first phones to upgrade to the much-anticipated Android O, which is due to be released later this year.

The S7 and S7 Edge initially ran on Android Marshmallow but have since received an upgrade to Nougat. 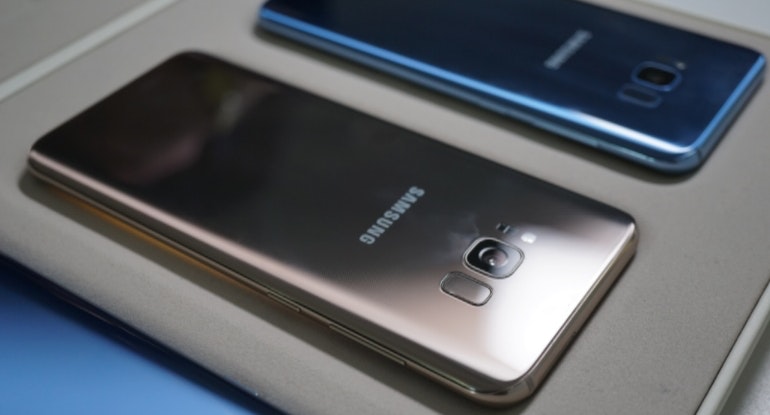 The S8 and S8 Plus are set to launch in black, grey, silver, gold and blue, with more colours expected once the phone has been released.

The S7 and S7 Edge was available in black, white, silver and gold when it first came out, with rose gold and coral blue added later.

The Galaxy S8’s is a very, very worthy upgrade indeed. Its all-screen front means it looks like no other smartphone. And with the addition of Bixby, a better camera and best-in-class security, it’s a bold and brilliant update inside and out.

Head to our dedicated page to compare our Galaxy S8 deals.