As its name suggests, 5G is the next-generation network technology that’s set to replace 4G as the means through which we connect to the internet on smartphones, tablets and a huge range of other web-enabled devices.

So what’s so special about 5G? How much will it cost? When will a 5G service launch in the UK? And what’ll change for smartphone users when it does? Sit tight and we’ll answer all your questions.

Still struggling to get 4G in your area? Take a look at the networks with the best coverage.

What sort of speeds does 5G offer?

In practice, according to the most recent Ofcom study the UK’s actual current average 4G speeds are well below that. Even on EE, which is the network with the UK’s fastest 4G service by some distance, customers experience an average speed of 20Mbps.

With that in mind, it’s similarly unlikely that actual 5G speeds for consumers will be anywhere close to the 20Gbps that the technology is capable of. But tests conducted under real-world conditions still augur well for a much faster service than 4G.

In 2015, Chinese phone-maker Huawei teamed up with the Docomo network to give customers participating in trials 5G connection speeds of up to 3.6Gbps. That’s superfast by anyone’s standards.

It might be lightning quick, but the very same things that impair 4G and 3G speeds will also affect the speed and quality of your 5G connection. Think: buildings (especially tall ones in high-density areas), microwaves and other Wi-Fi signals.

Are current-generation phones compatible with 5G?

Alas, no. To try out 5G you'll need to buy a dedicated smartphone with the correct modem for connecting to the ultra fast network. But as 5G becomes more available, more and more phones are being released with 5G connectivity.

What 5G phones can I get right now?

Samsung has just released its new flagship smartphone range - the S20. There are three handsets in the range, the Galaxy S20, S20+ and S20 Ultra, and they’re all available on 5G. 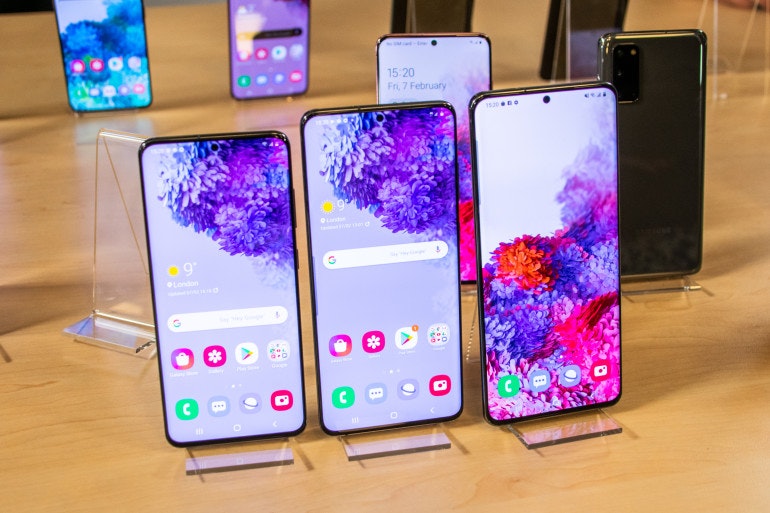 The Galaxy S20 is the cheapest of the three handsets, but that doesn’t mean it’s a slouch in the specs departments. It’s got a 6.2-inch Infinity-O display with a triple lens camera on the back that is dubbed the “smartphone camera to end all cameras”. The camera set up is made up of a 64MP Telephoto Camera, 10MP Front Camera and 12MP Wide Camera so you can snap a wide variety of brilliant photos.

One step up is the Samsung Galaxy S20+, which has a bigger 6.7-inch screen and has a similar camera array to the S20 so you can be assured of an image library of fantastic photos. Another great feature in the S20 range is the ability to record video in stunning 8K UHD.

Biggest and best is the Samsung Galaxy Ultra. With a 6.9-inch screen the display is perfect for big content action, with the Infinity-O display really bringing all your favourites to life. The camera takes a step up too - or rather, 108 steps. Yes, it has a huge 108MP camera that takes smartphone photos to a whole new level. 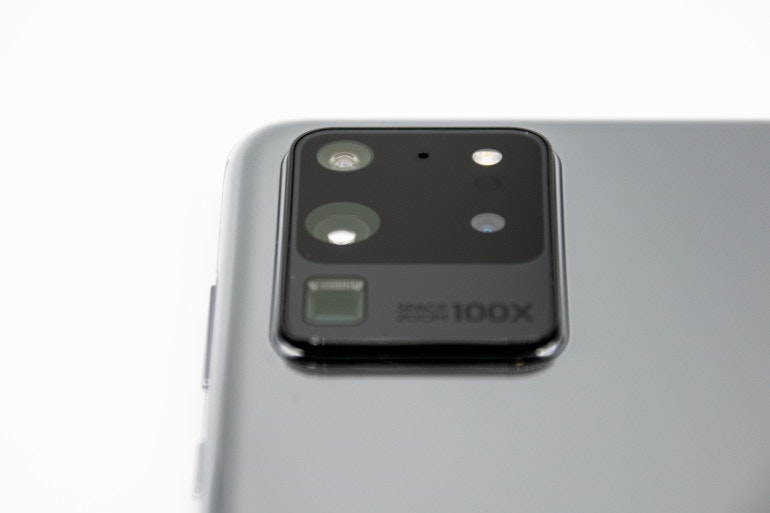 The Samsung Galaxy A90 5G has a bold 6.7-inch infinity display that makes all your favourite content look great - ideal when you’ve just downloaded a new movie with your superfast 5G connection.

It’s not lacking in the camera department either, the triple camera rear gets a variety of excellent images.

Get a great deal for the Samsung Galaxy A90 5G

Arguably the best of the bunch, this is the 5G take on Samsung's already bestselling Galaxy S10. Specs wise it takes things to another level. There's a huge 6.7–inch screen with QHD+ tech, 8GB of RAM, a hefty 256GB of storage, a rapid octacore chipset and a quadruple camera setup round the back. The selfie camera packs in two lenses for even sharper detail. Vodafone has yet to reveal pricing, but EE has the Galaxy S10 5G for £79 per month for 30GB of data and unlimited calls and texts and £10 up front.

Get the Samsung Galaxy S10 5G 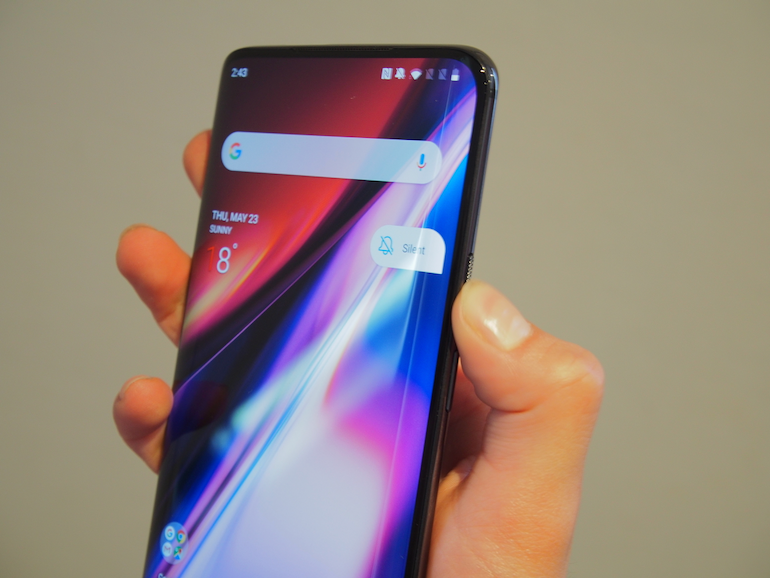 The OnePlus 7 Pro 5G packs a Snapdragon 855 processor, a 6.67–inc screen, pop up selfie camera and an in–screen fingerprint scanner. There's no news yet on how its battery will handle 5G, a concern considering the 4G model is not best in class when it comes to long lasting power. You can get the OnePlus 7 Pro 5G for £69 per month plus £50 up front, with 30GB of data as standard.

With a pop up camera like the OnePlus 5G model, Oppo's Reno 5G promises to be a decent bet for those who want something different to the usual offerings from major mobile makers. It's an EE exclusive, costing £64 per month and £50 up front over two years. The pop up mechanism looks sharper than the OnePlus, while the same Snapdragon processor ensures lightning performance.

LG's smartphones have struggled to get noticed in recent years, so Samsung's Korean rival will be hoping it can land a punch with its 5G phone. Its 6.4–inch screen is impressive and can be used with a new, secondary screen shown off back at MWC in Barcelona. At £79 per month for 30GB plus £50 up front, it's more expensive than any other 5G phone on EE. That's a hefty outlay for a device that neither looks or feels premium next to its competitors.

Will 5G change what I can do with my phone? 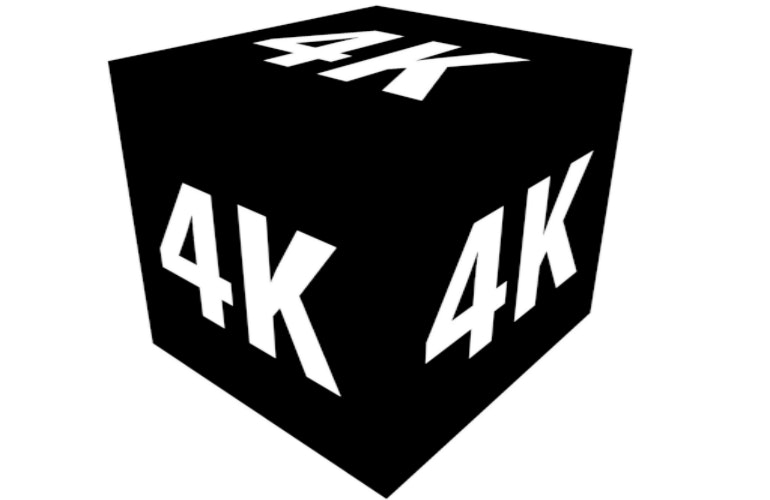 Where you’ll see a real difference with 5G is in the speeds you can download UltraHD (4K) and 3D video. With the theoretical maximum 5G connection speed of 20Gbps you could download an entire 25GB UltraHD movie in about ten seconds. And you’ll be able to stream UltraHD and 3D video more smoothly too.

As with 3G and 4G, with 5G you can, of course, still surf the web, stream video, download content and apps and do everything you do now. But you’ll be able to do it a lot quicker. You’ll also notice response times are much faster when you’re playing online games on your phone.

Will 5G be more expensive than 4G?

When 4G plans launched in the UK, networks charged more than they did for 3G plans.

How much more? Well, the cheapest EE 4G SIM-only plan when it became the first UK network to launch the faster service started at £36 per month. That bought you just 500MB of data per month.

EE’s most expensive 4G SIM-only plan at launch was £56 per month, which got you a monthly usage allowance of 8GB. Pricey, no?

However within not much more than a year, it was fairly standard for 4G plans to be priced in line with 3G. So, with any luck, premium pricing for 5G won’t stick around for too long either.

And as it stands, we haven't seen a huge premium on 5G price plans

What other benefits will 5G bring? 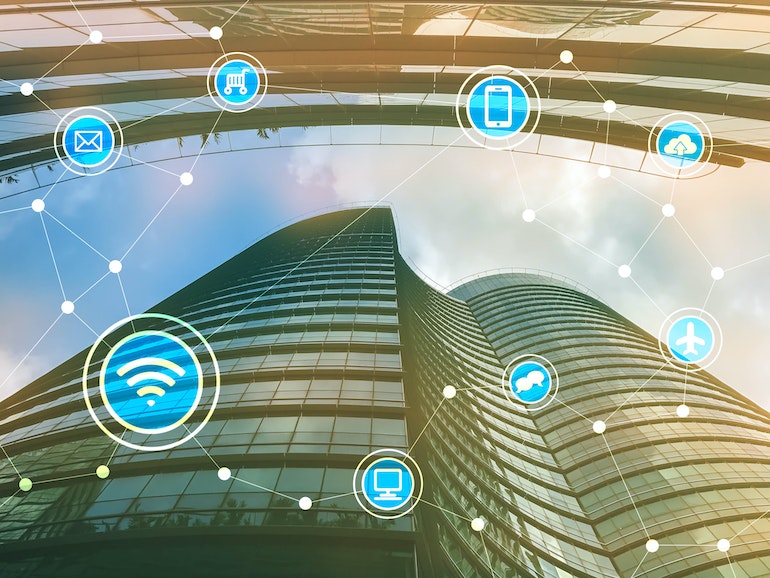 In recent years, you may have heard people bandying around the phrase ‘Internet of Things’. The ‘Things’ here refers to devices, such as fridges, cars and radiators, that now connect to the internet.

5G technology has the capacity to handle the surge in demand for bandwidth generated by the explosion in the number of internet-connected devices. That means the mobile web won’t become congested and slowed down by the sheer weight of demand.

EE and Vodafone are both stocking 5G home routers, designed to alleviate the strain on traditional wired platforms. This could lead to a revolution in how we access the internet at home as well as on the move.

"We cannot help but marvel at the speed of 5G compared to 4G but its important to note the technology is still in its infancy. When readily available to the masses, this technology will change the way we live forever and interact- not just with products but with each other as we truly start to adopt the internet of things."

Compare networks’ 4G speeds and coverage with our one-stop guide.