Every December, Uswitch looks over the number of broadband speed tests run throughout the year to find out which areas of the UK have the fastest internet speeds and which areas have the slowest. In some cases, the difference between your speed and your neighbour’s can be dramatic, and the UK’s slowest streets aren’t always where you might think.

With so many of us spending a lot more time at home this year, perhaps it’s not surprising that in 2020 Uswitch recorded more speed test results than ever, with nearly 400,000 people testing the broadband speed at their home. This is a 225% increase from the 122,000 Uswitch speed tests taken last year, showing just how much customers rely on a fast, consistent broadband connection.

The fastest broadband speeds are often in surprising areas, with big cities like London and Manchester noticeably absent from the top 10 fastest streets in Britain, and with average speeds often varying drastically from one postcode to the next.

The good news is that the number of broadband users enjoying faster speeds is growing. More than half of users (54%) now get speeds of more than 30Mbps, up from under a quarter (22%) five years ago. But despite the fact that superfast broadband (downloads speeds of 30Mbps or more) is available to over 95% of the country, a recent Uswitch survey found that only six in ten (60%) believe they can access it in their local area. 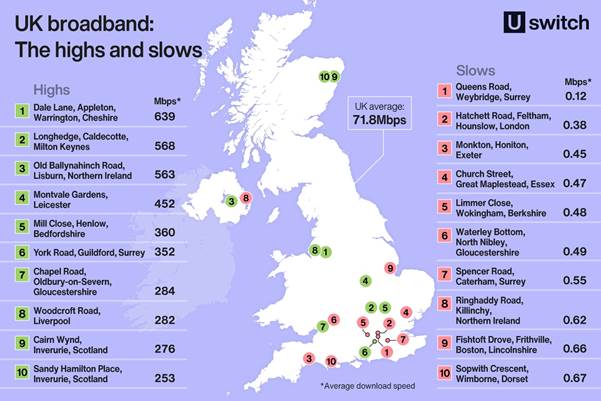 The slowest street in the UK is in Surrey

This year, the street with the slowest broadband speed is Queens Road, Weybridge in Surrey, whose residents are somehow managing to get by with average broadband speeds of just 0.12Mbps.

In a time when internet access is more vital than ever, it’s surprising that the slowest street is actually slower than the previous year’s title-holder. In 2019, Kingsclere, Huntington in York, was crowned slowest with access to average speeds of just 0.22Mbps.

Sluggish-paced Queens Road is a staggering 5,330 times slower than Dale, where average speeds reached 639.67Mbps over the past year. The difference between fastest and slowest is astonishing, and has increased dramatically since last year, when the worst street was only 830 times slower than the fastest. This suggests that the UK’s digital divide is growing with the rollout of full fibre broadband (FTTP) that’s bringing ultrafast speeds to parts of the country.

Ernest Doku, broadband expert at Uswitch.com, says: “The digital divide that runs through Britain has grown dramatically in the last year, with the fastest street’s broadband more than 5,000 times quicker than the slowest’s.

“It’s interesting to see that the North claims the fastest street this year, while the slowest street is in the South East, showing that the speed of your connection has nothing to do with where you live.

“It’s great that more of us are enjoying ultrafast broadband, but we don’t want to see large swathes of the country left behind on shoddy connections that aren’t suitable for modern life.”

What internet speed are you getting in your home?

Hover over the points in our graphic with your mouse — or tap them if you’re on your mobile — to see where the UK’s slowest streets are and what speed they’re getting.

What’s interesting is that ultrafast broadband services are at least partially available to half of the slowest streets in the UK, meaning that if customers in these areas decided to switch to an ultrafast broadband provider, they could get access to broadband speeds of at least 100Mbps –– that’s speeds potentially hundreds of times faster than what they’re struggling with at the moment.

Ernest went on to say, “With millions of us working from home and watching more streaming TV at the moment, a good broadband connection is more important than ever.

“One of the biggest obstacles stopping people from getting faster downloads speeds is the lack of awareness regarding superfast and ultrafast broadband.

“For example, some people on the UK’s fastest street, Dale Lane, enjoy speeds above 900Mbps, while others only get 5.5Mbps.

“And of the ten slowest streets, seven could have access to faster broadband, so we urge residents there — and anyone else unhappy with their broadband speeds — to do a quick check online to see what speeds they could be getting.”

The fastest streets in the UK

Hover over the points in our graphic with your mouse — or tap them if you’re on your mobile — to see where the UK’s fastest streets are and what speed they’re getting.

The fastest street for broadband in the UK is Dale Lane in Appleton, Cheshire, where average speeds reached 639.67Mbps over the past year. Second and third place went to Longhedge, Caldecotte, Milton Keynes, Buckinghamshire and Old Ballynahinch Road, Lisburn, Northern Ireland –– both of which had average broadband speeds of over 560Mbps.

While Dale Lane is the clear winner, it’s worth highlighting that last year the top three fastest streets maxed out at 182.52Mbps, 135.56 and 134.34Mbps. This reveals a staggering jump in the fastest speeds available in well-connected regions of the UK.

Notably, York Road in Surrey is the only street to keep a place in the UK’s top-ten rankings for fastest street from our 2019 study.

Here are some of the slowest streets for broadband in different areas of the country.

At 141Mbps, the Big Smoke’s fastest street is Junction Road in the London Borough of Enfield, with Franche Court Road in Wandsworth taking second place. Central Park Road in Newham retains its position as the third fastest street in London, and is the only street from 2019 to reappear in this year’s top rankings for the UK’s capital.

London’s slowest street, Dufferin Street in Islington, performs noticeably better than the country’s most sluggish streets for broadband, which is most likely because it’s an urban area with a wider general coverage compared to more rural areas. However at 3.15Mbps, it’s still not even the recommended speed for watching a good-quality video, let alone all the other online tasks modern households get up to.

Scotland's slowest street is Aultachruine, which is based in Glenshiel, Kyle. Its average download speed is 2.06Mbps, which is a lot higher than the slowest speeds in the UK overall.

Pennant in Llanbrynmair has Wales' slowest broadband speed, only reaching 0.86Mbps on average in the speed tests taken by its residents. It's one of the bottom 20 slowest streets in the UK.

Although Northern Ireland is a focus for many full fibre providers in the UK, ultrafast broadband speeds are still a long way from becoming nationwide. Its lowest street for broadband, Ringhaddy Road, features in the 10 slowest streets for the entire UK this year.

Holloway Head in Birmingham has the West Midlands' slowest broadband speed, at just 0.99Mbps on average.

Faster broadband is closer than you think

For many, it’s a story of the broadband haves and have-nots living side by side. In Surrey, residents on Woodcote Lane, Purley, enjoy ultrafast speeds of 206.45Mbps, while one of the country’s worst streets, Spencer Road in Caterham, is just a 17-minute drive away — but has average download times 372 times slower at 0.55Mbps.

Further reinforcing a lack of awareness of the faster speeds available, of the ten slowest streets, seven (70%) have access to a quicker service, suggesting that consumers are being deprived of better broadband simply because they aren’t checking.

Looking to switch your broadband to a faster service? Compare broadband deals with Uswitch to see what speeds you could be getting.