Home insurance for subsidence-affected homes and other properties

Subsidence is the caving in or sinking of an area of land, so if your home is affected by subsidence then you may wish to speak to a specialist home insurance provider.
Share this guide

Home insurance for subsidence-affected homes and other properties

Specialist home insurance or non-standard home insurance can often help cover issues such as subsidence at a lower cost than standard policies, but there are also measures you can take to help your claim and prevent subsidence from causing too much damage.

Read our guide to find out more or use the link below to begin comparing non-standard home insurance.

What is subsidence and what can be done about it?

Essentially, subsidence is when your property's structure shifts in a downward movement as a result of changes in the surrounding soil.

Heave is a term that is often lumped in with 'subsidence' when it comes to home insurance because it is also caused by changes in the surface which the property was built on.

However, heave involves an upward movement, which can occur when dry soil has too much moisture, causing it to swell and move the structure up.

Subsidence on the other hand can occur when the soil shrinks due to a lack of moisture, causing the structure to move down.

Clay soil is one of the biggest causes of subsidence as it changes its structure depending on how much moisture there is. This means when the weather is exceptionally dry, clay soil can cause your home to move in a downward movement.

Trees are also a factor, especially as they get older and the roots extend further and potentially dry the soil underneath and around your home.

Similarly, removing mature trees can result in the opposite effect called 'heave', which would make the previously dry soil swell up and heave your home in an upwards movement.

Drains suffering from leakage problems can also be a factor as they can erode some soil beneath the foundations of the buildings. 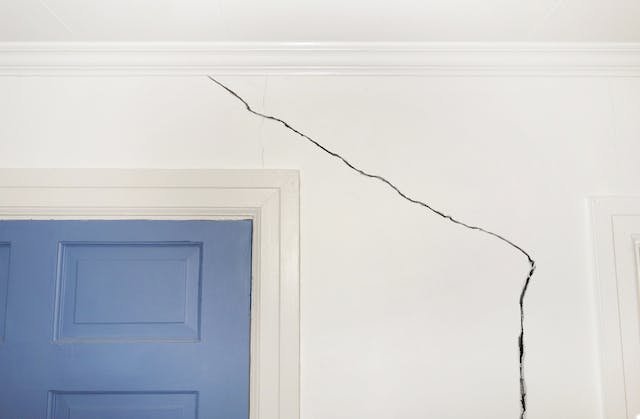 Subsidence cracks and how to spot it early

Cracks in the plaster of your property can be fairly common at some point in its lifetime, so this is not always a clear indicator of subsidence.

It's worth staying vigilant for any cracks that appear, especially if they occur roughly at the same time and during exceptionally dry weather.

Subsidence cracks are usually wider at the top than at the bottom and are usually thicker than 1 mm, and tend to appear at weaker points of the building's structure, such as around doors and windows.

If you suspect that your home might suffer from subsidence, then get in touch with your buildings insurance provider as soon as possible.

An expert will be able to identify the cause of the problem and decide to take action of either strengthening the building, removing or pruning trees and shrubs, or fixing leaking drains.

This could range from subsidence to unoccupied home insurance and even covering buildings where the main structure is made from materials other than brick.

Non-standard home insurance takes in these factors and can, in theory, offer a cheaper rate than standard policies.

You can also get cheaper non-standard or subsidence home insurance by taking a few precautions around your property.

The trees and shrubs surrounding your property are things you can usually control, so be sure that any new trees you plan to grow are a good distance away from the building.

As a general rule, their distance from your home should be equal to the height they are expected to grow to, so that the roots do not reach the soil under your home.

Be sure to also check for any blocked or leaking drains, and clean out gutters.

If you change insurance and you've discovered subsidence between eight weeks and one year into your new contract, then your new insurer and old insurer will share the claim equally.