If you believe in the paranormal and are looking to connect with the “other side”, the experts at Uswitch have created an index to find out which haunted hotels provide scarily good stays.
Share this guide

Do you believe in the paranormal, or are you more sceptical of those who cry ‘ghost’? Whatever you believe, would you ever consider spending a night in a haunted hotel?

If you’re keen to experience the chills and thrills of checking into a haunted hotel, Uswitch sought to identify where the ‘best’ haunted hotels are situated around the world to determine which hotels provide scarily good stays. To do this, we analysed 75 of the world’s most haunted hotels and created an index evaluating three main factors: TripAdvisor ratings, the price of a one-night stay, and guests’ reviews containing spooky-related words.

Where are the best haunted hotels around the world? 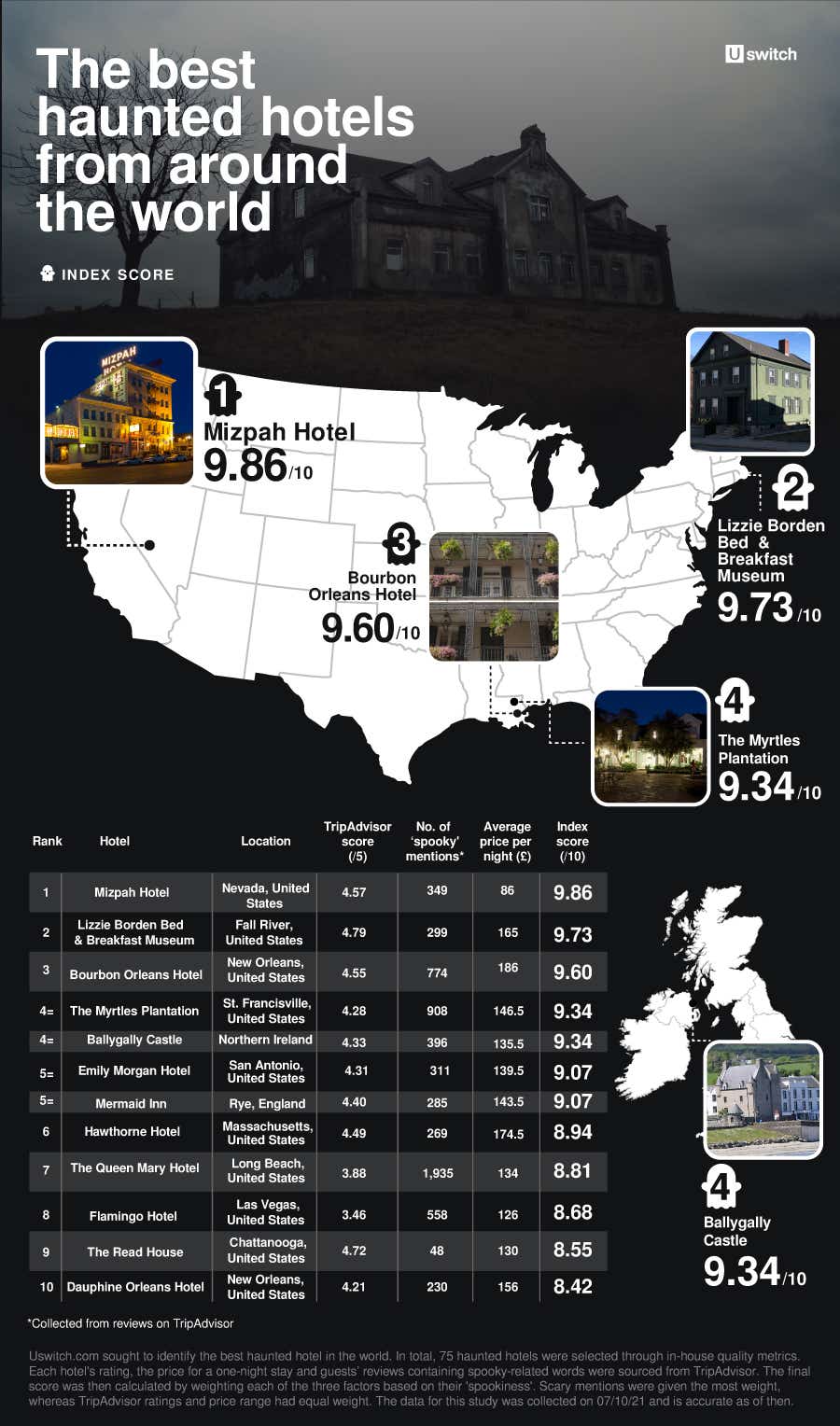 The Mizpah Hotel in Nevada is the highest rated haunted hotel in the world after receiving a total score of 9.86 out of 10 in our index. The hotel scored well for its high TripAdvisor rating of 4.57 out of 5 and has the cheapest price among the top 10 at £86 per night. Legend has it the ‘Lady in Red’ makes her presence known by whispering in men’s ears and leaving pearls from her necklace on guests’ pillows.

In second, with a total score of 9.73 out of 10, is the Lizzie Borden Bed & Breakfast Museum, situated in Massachusetts. The house received the highest TripAdvisor score in America (4.79) and is known for doors opening and closing on their own coupled with a “mysterious floral scent” that some say are signs of the Borden’s spirits.

Ranking third is the Bourbon Orleans Hotel, with a score of 9.60 out of 10. Receiving the third-highest number of spooky reviews in the top 10 (774), the hotel is said to have ghosts from different eras frequently appearing in hallways and the lobby. If that wasn’t enough to tempt ghosthunters, one review even states, “if you want to experience the ghostly apparitions, stay one night on the sixth floor of the Bourbon Orleans”.

Dauphine Orleans Hotel in New Orleans is the 10th best haunted hotel in the world, with a total score of 8.42 out of 10 in our index. New Orleans is one of the most well-known spots to encounter spirits in America, with reports suggesting that ghost sightings are frequent at the luxury hotel.

Where are the best haunted hotels in Europe?

Of all countries in Europe, the five best haunted hotels are situated in the United Kingdom and Ireland. Topping the list is Northern Ireland’s Ballygally Castle, with an index score of 9.34 out of 10, owing mainly to the 17th-century hotel’s high TripAdvisor rating of 4.32 out of five, and its 396 ‘spooky’ mentions from its guests in reviews. This may come as no surprise, though, as the castle is said to be home to the ghost of Lady Isobel Shaw.

In second with a total score of 9.07 out of 10 is the Mermaid Inn in the English town of Rye in East Sussex, known for its rich history and supernatural activity. With countless ghost sightings, instances of chairs rocking on their own, and figures reportedly walking through walls, the hotel is often considered one of the most haunted sites in Britain.

Castle Leslie Estate in County Monaghan, Ireland, is the third best haunted hotel in Europe, with a score of 7.50 out of 10 in our index. With the hotel ranking highly on TripAdvisor (4.62 out of five) and being known for its many ghost sightings, including a monk and ‘Lady Constance’, it’s hardly surprising this establishment makes the top three.

Scotland’s Dalhousie Castle is in fourth, with a score of 7.23 out of 10 in our index. The 13th-century hotel, which is Scotland's oldest inhabited castle, is home to several ghosts - most notably the ‘Grey Lady’, or Lady Catherine, who is said to haunt the castle’s dungeon.

Completing the top five is Chillingham Castle, located in Northumberland in North East England, with an index score of 6.97 out of 10. The castle boasts some of the highest levels of paranormal activity in England, with a large collection of spectres and apparitions spotted by visitors over the years. As a result, it should come as no surprise that the hotel’s reviews include the most mentions of ‘spooky’ words of all establishments in the top 10, with 597 in total.

The only hotel in the top 10 that isn’t situated in Great Britain and Ireland is Karosta Prison Hostel in Latvia, with an index score of 4.73. The hostel, which ranks in ninth position, was used as a Nazi and Soviet military prison in the 20th century. Many visitors have experienced paranormal activity at the site, including light bulbs unscrewing from sockets, doors opening by themselves, and the ghost of ‘The White Lady’ that wanders the corridors.

Where are the best haunted hotels in the United States? 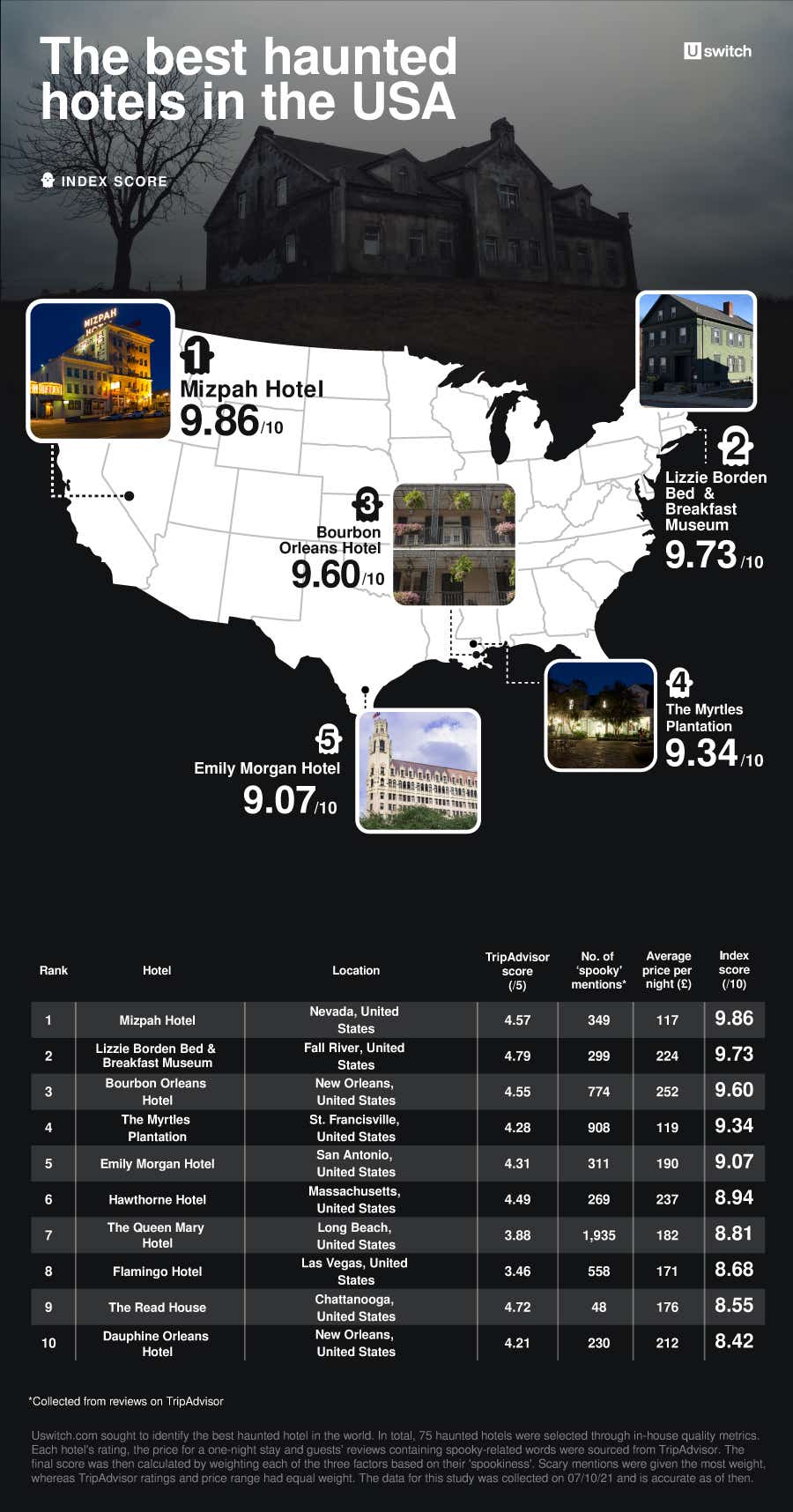 The Mizpah Hotel in Nevada is the highest rated haunted hotel in America after receiving a total score of 9.86. The hotel scored highly for its TripAdvisor review (4.57) and had the lowest price amongst the other top 10 (£117). Legend has it the ‘Lady in Red’ makes her presence known by whispering in men’s ears and leaving pearls from her necklace on guests’ pillows.

In second with a total score of 9.73 out of 10 and situated in Massachusetts is the Lizzie Borden Bed & Breakfast Museum. The house received the highest TripAdvisor score in America (4.79) and is known for doors opening and closing on their own, coupled with a mysterious floral scent that some say are signs of the Borden’s spirits.

Ranking third is the Bourbon Orleans Hotel, with a score of 9.60 out of 10. The hotel received a total of 774 ‘spooky’ mentions from guests reviews and is said to have ghosts from different eras appearing in hallways or the lobby.

Coming fourth is The Myrtles Plantation in St. Francisville, with a total score of 9.34 out of 10. Multiple images taken on the property appear to show ghosts which lead National Geographic Explorer to name the plantation ‘The South’s Spookiest House’. The hotel has the second-highest volume of spooky mentions (908) in the top 10, only behind The Queen Mary Hotel in seventh, which received 1,935.

Completing the top five is the Emily Morgan Hotel (San Antonio), with 9.07 out of 10. The hotel that once housed a psychiatric ward is known for unexplained noises and other sensations; the 7th floor allegedly has the most hauntings. In fact, one review confirmed a visitor had actually seen a shadowy figure in their room just before dawn.

Which country is home to the most haunted hotels?

Our analysis of TripAdvisor reviews of the 75 most haunted hotels around the world can reveal that the United States is home to the most, with a whopping 45 establishments with a supposed link to the “other side”. Following behind the United States with 38 fewer haunted hotels is England with seven, including The Langham - a luxury 5-star hotel on London’s Regent Street.

Australia and Ireland have three haunted hotels each, and Scotland, South Africa and Wales are home to two each. Among the top 75, the following countries are home to one haunted establishment: Canada, Denmark, France, India, Italy, Japan, Latvia, Mexico, Northern Ireland, Spain, and Sweden.

We analysed guests’ reviews of each hotel for ‘spooky’ keywords, such as scary, terrifying, terrified, spooky, horrifying, horrified, scared, eerie, creepy, ghostly, ghost, frightening, frightened, paranormal, and haunted, to find out which haunted hotel is the scariest to spend the night.

Our research found Stanley Hotel, based in Colorado in the United States, had a staggering 1,951 reviews mentioning ‘spooky’ words owing to scary happenings. This should come as no surprise as this hotel is where the world-famous horror novelist Stephen King stayed in the 1970s, which inspired him to write one of his best-selling masterpieces, The Shining.

Following behind with just 16 fewer ‘spooky’ mentions is The Queen Mary Hotel, based in Long Beach, California. Among the Art Deco style and grand appearance of the Queen Mary lies another, more sinister force - especially in Stateroom B340 - which is why it has been labelled one of the top 10 most haunted places on Earth.

In third is The Myrtles Plantation, with 908 ‘spooky’ words mentioned in reviews. Located in St. Francisville, Louisiana, this house is renowned for its history and strange goings-on. From handprints on mirrors, footsteps on the stairs, vanishing objects, death by poison, hangings, and gunfire - The Myrtles Plantation is home to more paranormal activity than any other house in America.