With the continuing success of Airbnb, more of us are renting out our homes to turn over a profit. But is it possible to make enough money to pay off your mortgage? Uswitch investigates.
Share this guide

Since its humble beginnings in 2007, Airbnb has exploded in popularity. Not only can travellers find accommodation all over the world, but hosts are able to generate additional income by listing their homes on the platform.

But just how much money can Airbnb hosts really expect to earn and could the profits be enough to pay off their mortgage?

Interested in finding out, the mortgage comparison experts at Uswitch gathered data on the average price of Airbnb properties in popular European cities. After analysing the data to uncover how much of a profit Airbnb hosts could make, they calculated whether these takings would be enough to pay off a full mortgage.

The top 10 European cities for paying off your Airbnb mortgage 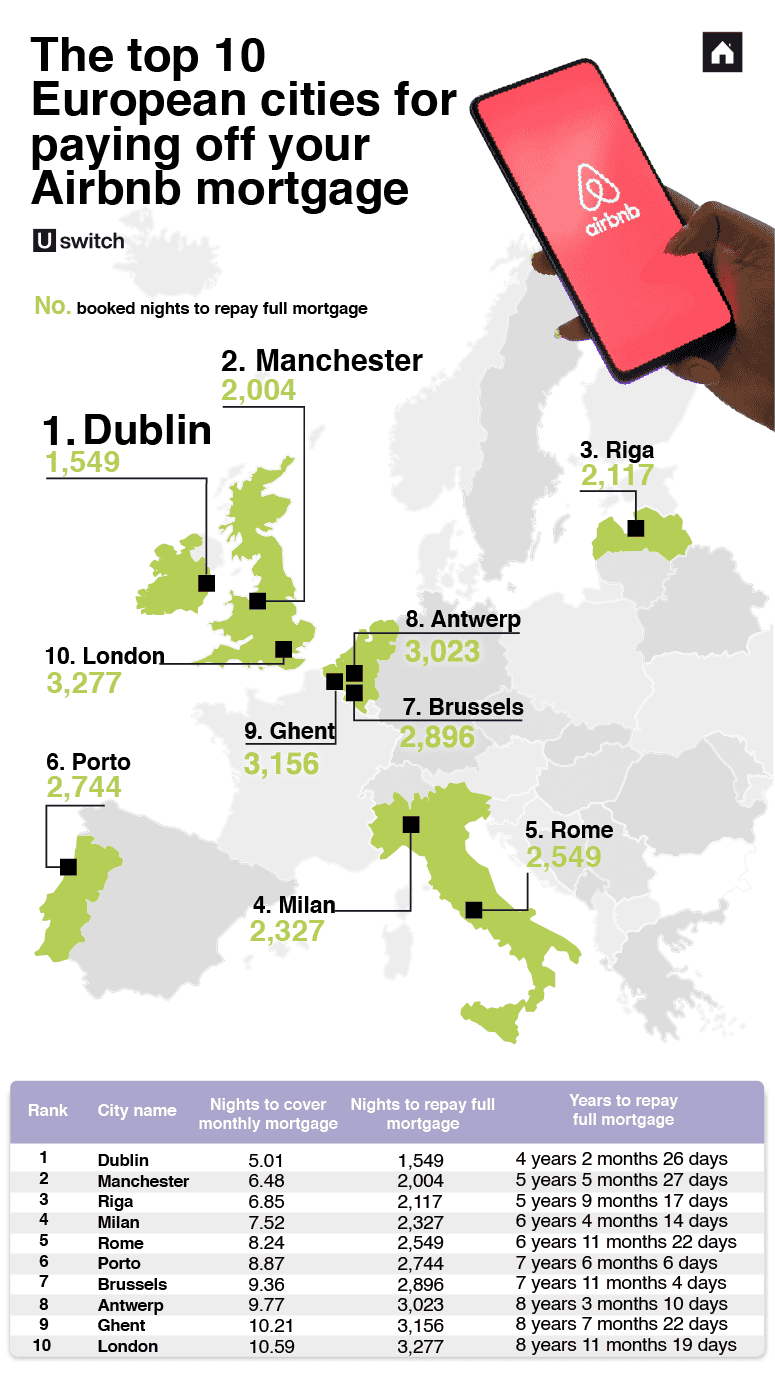 The best European city for Airbnb owners to pay off their mortgage quickest is Dublin. Not only is it recognised as one of the most cultured European cities, but the lively Irish capital also boasts some of the most beautiful homes in Europe.

The home of Alan Turning, Oasis and possibly the most famous football team in the world is also the second-best place to pay off your Airbnb mortgage.

Manchester hosts could settle their mortgages after just five years, five months and 27 days (or 2,004 occupied nights) of renting out their Airbnb property. Just a week’s booking would be enough to cover monthly mortgage repayments in the cultural city (estimated at €363,600).

It would take just five years, nine months and 17 days’ (or 2,117 nights’) worth of rent to recoup the full mortgage costs of  €218,760 in the Latvian capital, making it the third-best place to own an Airbnb property.

Riga is a visitor hotspot and a great destination for foodies. The capital city is also renowned for its stunning Art Nouveau architecture and its Vecrīga (old town) and Centrs (city centre), making it an appealing choice for Airbnb guests.

With an estimated mortgage cost of €449,400 for a three-bedroom house, it would take Airbnb hosts with a property in Milan six years, four months and 14 days to pay off, making it the fourth-best place to repay Airbnb mortgages.

The fashion capital has an abundance of cultural architecture and landmarks to reel in the tourists. From the famous Il Duomo cathedral to elegant cafes that fill Piazza del Duomo, you won’t be hard-pressed to fill the 2,327 nights needed to pay off your Airbnb mortgage in Milan.

Not only can Italy’s capital enable hosts to pay off their mortgages in just six years, 11 months and 22 days (2,549 nights), but owning an Airbnb property in Rome is an easy catch for visitors. Airbnb listings in Rome are recognised as some of the most affordable stays near an iconic landmark in Europe, making it a highly attractive destination that’s guaranteed to attract guests.

Portugal’s second-largest city is the sixth-best place to recoup your mortgage price through Airbnb. Hosts in Porto would need 2,744 booked nights—or seven years, six months and six days of occupancy—to repay their estimated mortgage price of €284,040.

To start recovering costs, Airbnb hosts would only need a nine-day booking to cover one month’s mortgage repayment, which isn’t a difficult feat in a place like Porto. The coastal city has much to offer visitors, from its medieval district to its famous port wine.

Belgium is a popular place for Airbnb listings and offers some intriguing properties, such as the world’s smallest Airbnb home. The historical city of Brussels makes the top 10 as the seventh-best place to own an Airbnb property for mortgage repayments.

Airbnb owners would need to rent their property for seven years, 11 months and four days (2,896 nights) to pay back the average estimated mortgage price of €438,000. An additional appeal for visitors to stay in a self-catered Airbnb is that Brussels is one of the cheapest cities to hire a car in Europe, making it easy to get around and explore.

Not only is Antwerp one of the best cities to own an electric vehicle in, but it’s the eighth-best place to pay back your mortgage through Airbnb. Hosts would have to fill their homes for 3,023 nights—or eight years, three months and 10 days—to recoup the costs of their mortgage.

Antwerp is a brilliant place for a city break (and therefore Airbnb guests!), with plenty of sightseeing, museums and foodie options to explore. Visitors can also make use of the Antwerp bike scheme for cheap and easy travel around the city.

In ninth place is Ghent—Belgium’s historical and lesser-known city. A 10-day booking would be enough to cover a month’s Airbnb mortgage payment in the medieval city. Ghent also has plenty to offer visitors, including its historic architecture and art.

Hosts would need to rent out their property for eight years, seven months and 22 days (3,156 nights) to pay back their Airbnb mortgage, which is estimated at €453,000 in Ghent.

London topped the charts in 2020 for having the most Airbnb listings out of all European cities. Now it rounds off the top 10 European cities for Airbnb owners to pay off their mortgages, where 3,277 nights of occupancy (eight years, 11 months and 19 days) would cover the cost.

Want to further boost your income from a London let? Airbnb owners in the UK’s capital can offer popular amenities such as valet parking, to increase the listing price by an average of €43.50.

It’s important to note that in London you’ll be subject to short-term rental laws, which state, you can only rent your property for a maximum of 90 days per calendar year. For longer than this you will need to receive permission from your local council.

Other European cities where Airbnb can pay off your mortgage

See below to find out where in Europe it would take less than 16 years to pay off your Airbnb mortgage. 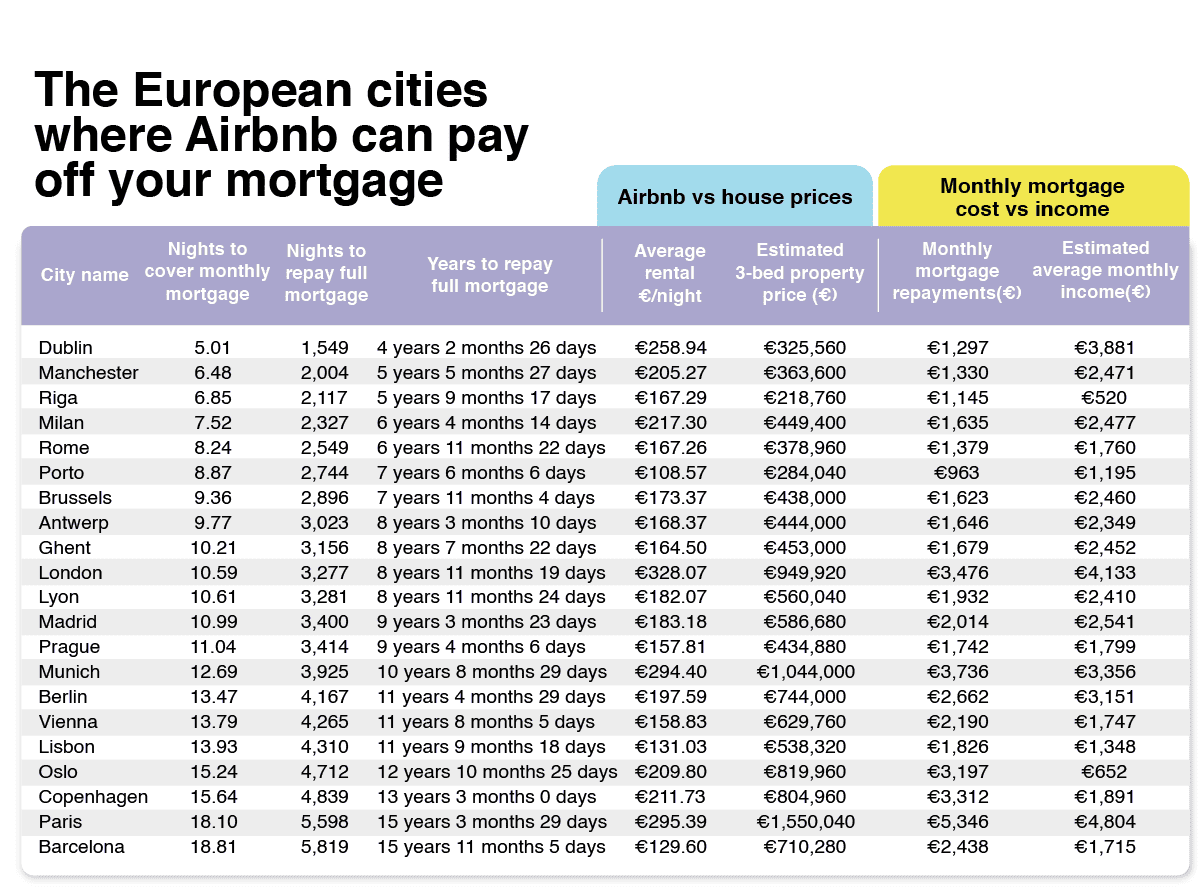 How to manage a mortgage for your second home

If you have the means to invest in a second home as a holiday home or as an investment property, can prove to be valuable long-term investments.

Whilst listing a property you live in for part of the year on Airbnb can be a great way to earn some extra income. However, there’s many things to consider before you start.

The UK government introduced the Rent-a-Room Scheme, which allows you to earn up to £7,500 tax free from sharing space in your primary residence.

On Airbnb, you can receive a £1,000 tax-free allowance on income earned from renting out your property. You can’t claim both.

Uswitch’s mortgage expert, Florence Codjoe, highlights what you should consider before getting a second-home mortgage.

Consider a buy-to-let mortgage. If you’re investing in a second home for the sole purpose of renting out the property then a buy-to-let mortgage is worth considering. Most buy-to-lets are interest-only mortgages, meaning your mortgage payments will be lower—giving you time to save up to pay off the “capita” amount at the end of the term.

*The average monthly income is pre-tax and excludes any other expenses related to the property.

Florence is also a car insurance spokesperson for Uswitch and has recently been quoted in Newsweek, The Sun and Daily Record.