Google Stadia takes a unique approach to gaming. You don’t really need any equipment beyond a computer or streaming device and a decent broadband connection. So what do you get for your Google Stadia subscription? And how does it compare to other online gaming options and gaming consoles?
Share this guide 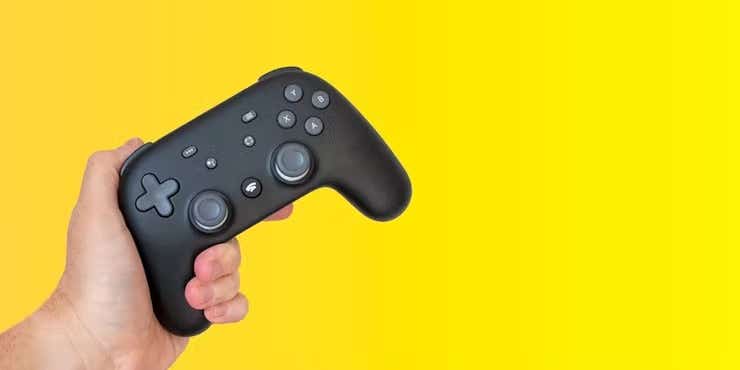 What is Google Stadia?

Google Stadia is an online game streaming service that doesn’t require a dedicated gaming console. First launched in November 2019, Stadia is Google’s cloud-gaming subscription service that looked like it would signal the end of console gaming once and for all.

Of course, cloud gaming was hardly a new concept. But with platform game streaming services already in place from companies like Microsoft, PlayStation and Nintendo, Stadia was unique in that it didn’t require any special hardware at all.

A Google Stadia subscription costs £8.99 a month and gives you access to a large selection of titles that you can play online on your PC or laptop. Alternatively, you can use a Google Chromecast, but you’ll need a Stadia controller.

What equipment do you need for the Google Stadia?

If you’re accessing Stadia on your Google Chromecast Ultra, you will need to purchase a Stadia controller. If you’re playing on Google TV, you ​​can play with any compatible Bluetooth controller.

You can also play on supported mobile devices and pair selected controllers with them via Bluetooth.

One of the best things about Google Stadia is that it’s completely mobile, with games and gameplay saved in the cloud. This means that you are able to resume gaming on the go just by switching over to a compatible smartphone. You can either use your phone’s touchscreen or connect a controller via Bluetooth.

Here are the mobiles that are currently compatible with Google Stadia:

When fitted with the right controller, Google Stadia on your smartphone is one of the best ways to enjoy major releases in a handheld format. And it gives the Nintendo Switch some serious competition in the small-screen gaming market.

If you want to play Stadia games on your TV, it’s a simple matter of downloading the Google Stadia app to one of the following streaming devices or smart TVs. You’ll then need to connect some form of controller in order to play.

What internet speed do I need for Google Stadia?

Online gaming is the most bandwidth-intensive activity you’re likely to use your internet for. And in order to have fast, uninterrupted gameplay, you’re going to need to upgrade your broadband to superfast speeds at least.

According to Google, a minimum connection speed of 10Mbps is recommended when using Stadia. And to play in 4K, you’ll need a minimum speed of 35Mbps. But while you can stream games at these speeds, you’re not leaving yourself much margin for error. If another person in your household goes online and starts streaming a 4K movie, your 10Mbps of broadband speed is going to get used up really quickly.

Cloud gaming is fairly bandwidth-intensive. And if you want to get low-latency gaming without any lag, smooth streams and fast response times, you should aim for at least 60Mbps or more.

We tested the Google Stadia on full fibre broadband, with average upload and download speeds of 120-140Mbps. This meant there was no lag, no skips or screen tearing, with games loading quickly and response times were never a frustration.

Take a speedtest to see how fast your broadband is.

When accessing Stadia via Chrome on a laptop or PC, the user interface is very straightforward, minimalistic and easy to use. Your home screen shows your library of games currently purchased and in-play. You then simply navigate to the Store section where you can search for and purchase new titles.

If you have your Stadia set up to stream on your TV via a Chromecast, the interface on-screen is fairly limited. You can only access your home page and you’ll need to use your computer or mobile if you want to search for and purchase more games.

What games can you play on Google Stadia?

Stadia adds new games each month, many of which are available to play for free for Stadia Pro subscribers. And since some are available for a limited time, it’s a good idea to regularly check your account for updates and claim Pro titles you like the look of as soon as you see them. This can be done on your computer or mobile device in just a few clicks.

Of course, there are plenty more games to choose from, but you’ll need to pay to access them in addition to your Stadia Pro subscription fee.

Ubisoft has its own game streaming subscription service, Ubisoft+, which allows you to play over 100 PC games for £12.99 a month. A number of these titles can be accessed on Google Stadia if you link your Ubisoft subscription to your Google account.

There are also a number of other gaming subscriptions that give you access to larger game libraries for a similar price, including EA Access, Geforce Now and Microsoft Game Pass.

For most of these you’ll need to purchase a console, but you’ll then have access to a much larger library of games. Something to think about.

Google Stadia Verdict - Is it worth it?

Online gaming feels like a natural move, especially since so much of our digital media moves towards online-only and streaming. Not many people even own a DVD player anymore, opting instead to stream movies and shows.

Google Stadia as a concept is great, giving you access to a wealth of titles and the ability to play without any upfront cost for equipment. There’s even the option to pick up gameplay on the go.

If you’re new to gaming, unsure of what console to commit to or would just like the option to dip in and try out different games and genres, Google Stadia is a fantastic option. You can sign up and start gaming in minutes for just £8.99 (or even less as you’ll probably get a free one-month trial).

As long as you have a strong internet connection, either via fibre broadband or 5G mobile internet, you can play whenever you want.

However, the biggest drawback of Stadia is its game library. As it stands, it’s not quite in a position to challenge other major platforms like Sony and Microsoft. Until Stadia can offer unique features such as exclusive titles with wide appeal, the option to rent or trial games, or popular titles at a discounted rate, serious gamers will probably prefer to stick to the brands and the platforms they know.