Lockdown Britain has hit the sofa to stream more content than ever before. Official figures from the ONS reveals how the UK has spent its time during lockdown, in comparison to a previous study in 2015. 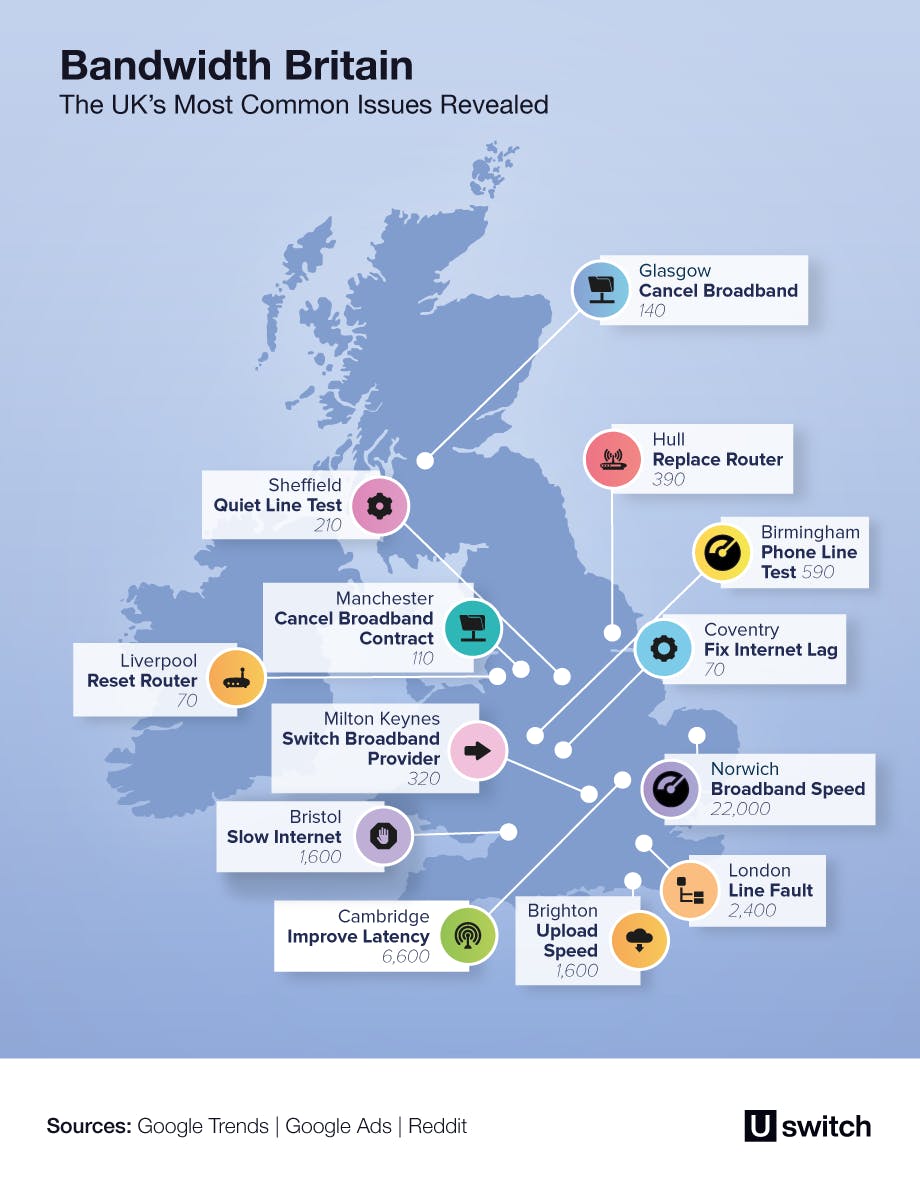 The ONS study found that the most popular lockdown activity was streaming video content, which took up two hours and 53 minutes each day, so it’s no wonder that our own recent study revealed that UK home broadband usage had increased by almost a third (29%) overall.

But, it’s not been smooth-streaming for over a third of the UK. A recent poll by YouGov discovered that 35% of broadband users in the UK have been dealing with slower than normal speeds since lockdown began.

How much bandwidth is the UK using and how is it affecting the quality of our connections?

During lockdown, there has been an increased demand on the UK’s broadband connections, with one in five households (21%) suffering from dropped connections, buffering or slow connection speeds.

We dug a little deeper, scouring Reddit to discover:

Technical complaints topped the list. Broadband Speed was the top issue affecting users in Norwich — they were searching for a speedy solution more than anywhere else in the UK. Improving Latency was the top issue in Cambridge who were the most fed up with having to wait for their connections to respond.

We also discovered a number of customer service related complaints such as Switch Broadband Provider and Cancel Broadband — it’s clear that Glasgow has had enough!

Have you suffered from any of these broadband-related issues? We’ve put together a handy guide to solving the most common internet problems so you can troubleshoot any issues that might arise.

Nearly 5 million consumers in the UK have suffered from broadband outages of three hours or more in the past year with the average affected home experiencing more than a day (29 hours) offline in total.

With millions of people across the country relying on their broadband connection for work, outages so far have cost the economy 5 million working days. Furthermore, outages caused by damage to cables or provider issues are costing the economy over one and a half billion pounds a year!

Whilst outages happen across the entire country, some cities have been hit worse than others.

Bristol is Britain’s outage capital, with residents suffering the longest time without broadband per person. Bristolians lost their connection for almost three million hours in total due to outages over the past year.

Norwich has the highest proportion of residents (15%) affected by their broadband going down over the last year. Meanwhile, Londoners reported the most instances of outages, with more than seven occurring in the past year.

The Welsh capital fares quite differently for outages though. Cardiff experienced the fewest outages in the UK, with only 1% of people having a lost connection in the same period.

Following a surge in demand, Netflix applied restrictions on streaming quality to reduce the amount of bandwidth used in order to help the video run as smoothly as possible. Our study found that per hour, Netflix would use around 1GB of bandwidth data at standard definition. 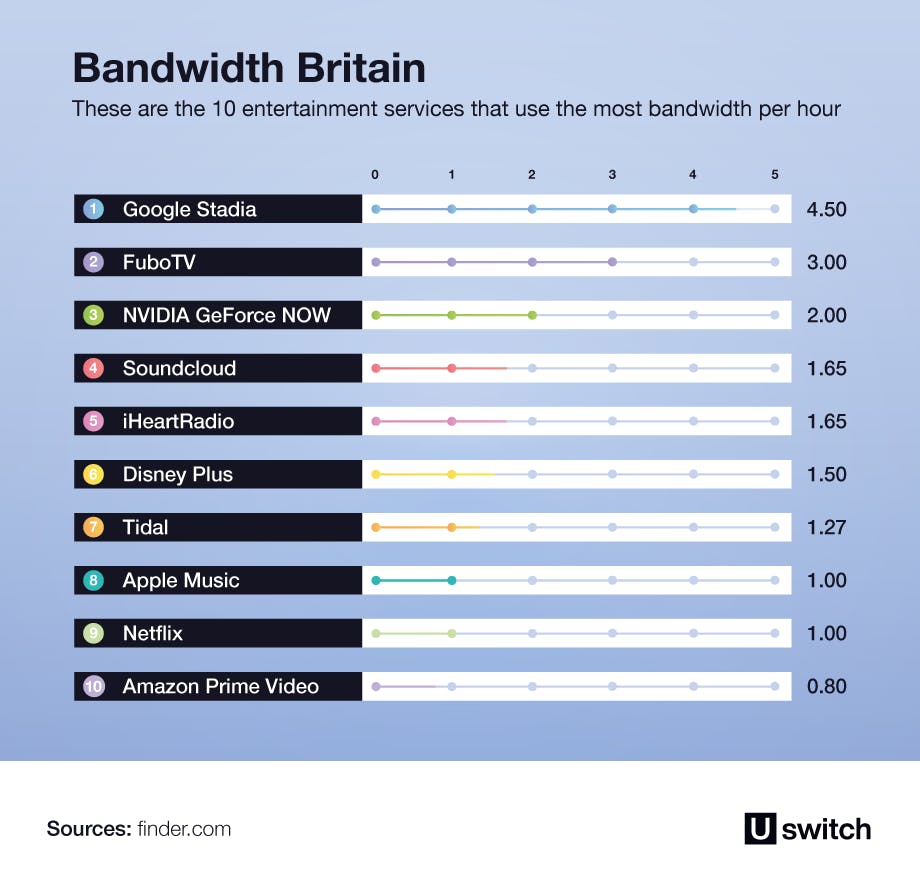 The popularity of cloud gaming, such as Google Stadia and NVIDIA GeForce NOW has boomed, but so has the requirement for the bandwidth to operate the games; which is why they have scored so high on the scale — Google Stadia uses 4.5GB of bandwidth per hour of play.

What is cloud gaming and why does it use so much bandwidth?

Cloud gaming isn’t powered by consoles or computers, but the games are streamed from the cloud via a data centre providing the processing power. Every single move that a gamer makes is communicated between the gamer and the data center and as such, requires a lot of internet bandwidth to provide smooth game play.

Where do the UK’s Biggest Bandwidth Users Live?

Our study named Southampton as the UK location experiencing the biggest surge in broadband use – jumping 49% to 44 hours and 36 minutes a week during lockdown, but which area in the UK is using the most bandwidth-hungry apps? 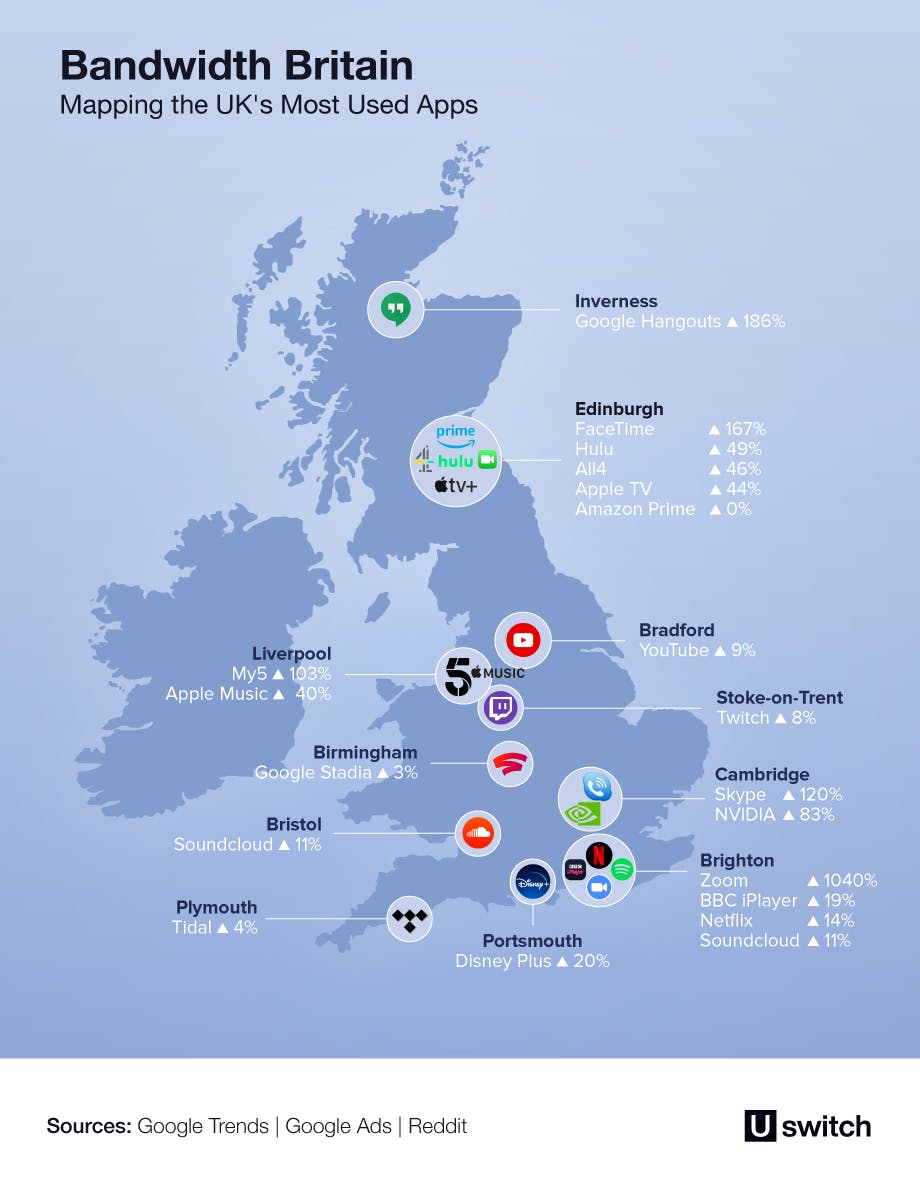 The UK’s Most Used Apps During Lockdown

Our research found that the average household has eight devices that connect to the internet, but what have been our most used apps during lockdown, and how much bandwidth do they eat up per hour? We took to Google Trends to find out: 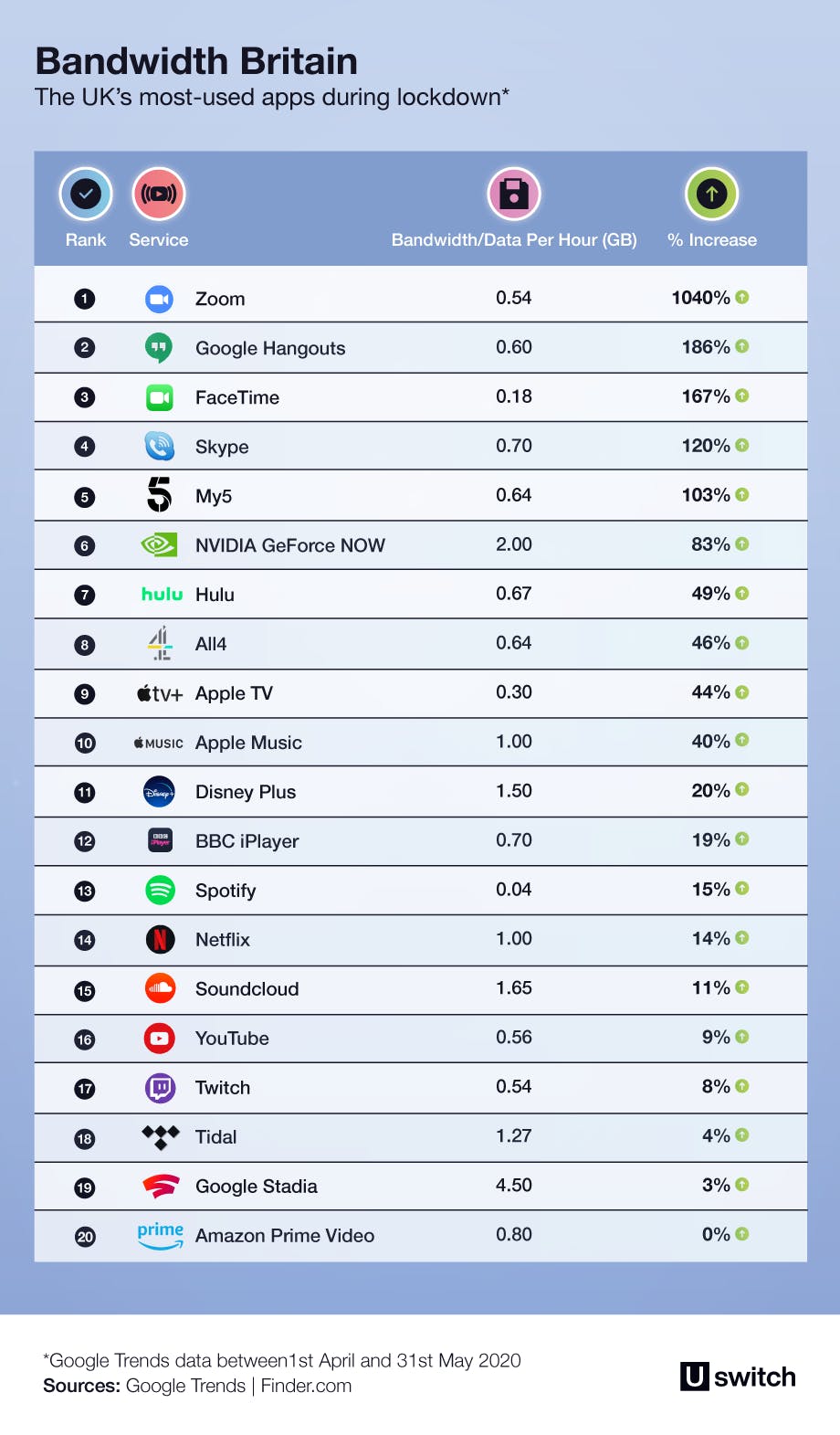 Revealed: The Winners and Losers of Lockdown Entertainment

Video-calling has seen a huge surge in popularity, with two thirds of consumers (68%) saying they have used the technology since the lockdown started. Zoom has been the app with the biggest increase in search interest in the UK.

Surprisingly Hulu tops the list as the most popular lockdown video streaming service, with 49% more searches than pre-lockdown. Even though Hulu isn’t officially available in the UK yet, it seems many people were still able to access Hulu’s content.  Apple TV is a close second, with 44% more people tuning in. Disney+ and Netflix are much further down the list than we predicted, with just a third more searches on average.

Is this because most people interested in streaming already have these services? Or maybe they’ve exhausted all of the content and are looking for new streaming sources? Amazon Prime Video bottoms out the list, with a negligible increase in interest of 0.1%.

Spotify needs to move over, Apple Music has taken the top spot during lockdown when it comes to searches. The music streaming platform has seen a 40% increase in searches. Interestingly, it could be the streaming quality that has knocked Spotify off the top spot. Streaming Spotify for one hour will use 0.04GB data, compared to Apple Music which uses 1GB and is much higher standard.

Whether you’re using your broadband to work from home or play from home, there is nothing more frustrating than when your internet connection drops out leaving you disconnected from family and friends.

We’ve asked our broadband expert Nick Baker to give us some pointers on solving the UK’s top issue — Slow Broadband Speed — helping you to get back online as soon as possible.

There are a number of reasons why your broadband connection could be slow, including multiple devices accessing the same network in your area, or a large number of devices on your home connection.

1. Carry out a broadband speed test so you can see just what speeds you’re getting. Try doing this at different times during the day and take a screenshot or a note of the result.

2. Check and see if your browser software is up to date. Having the latest version of your browser can really help speed up the way web pages load.

3. Is your router next to any other wireless devices? Anything from a wireless doorbell to fairy lights can have an impact on the speeds you’re getting. My tip would be to place your router on a small side table away from any other devices (rather than on the floor) and keep it switched on at all times.

4. Ensure you have a strong password protecting your Wi-Fi network to make sure nobody else is using it — this is particularly important if you live in a flat or apartment.

5. Is your router firmware up to date? Your router should update automatically, but you can force a reset (check the back of the device for instructions) and this can help with broadband speed.

6. Have you tried using a cable? Routers usually have an Ethernet cable socket in the back of the device so you can connect directly to them. Try using this and running the speed test again to see if you get faster results. Again, keep a note of these speeds.

7. Have you checked for interference on your phone line? Purchase some microfilters or get them from your provider. Plug them into every phone socket in your house as they split the broadband and phone signals so they don’t interfere with one another.

8. Are you using a phone line extension cable? These (especially if they are long) can impact the speed of your broadband. If you need to use one, make sure it’s high quality and as short as possible and not tangled up.

9. Plug your router directly into the main phone socket. These sockets usually have a line running across the front of them. Make sure your router is connected to this socket then try running the speed test again.

Still having issues? Take a look at our best broadband deals for your area.