Amazon Best Sellers: Tech with the most trustworthy reviews

Uswitch analysed the top 50 best-selling tech products according to Amazon UK Bestsellers pages, to find out which technology has the most trustworthy reviews.
Share this guide 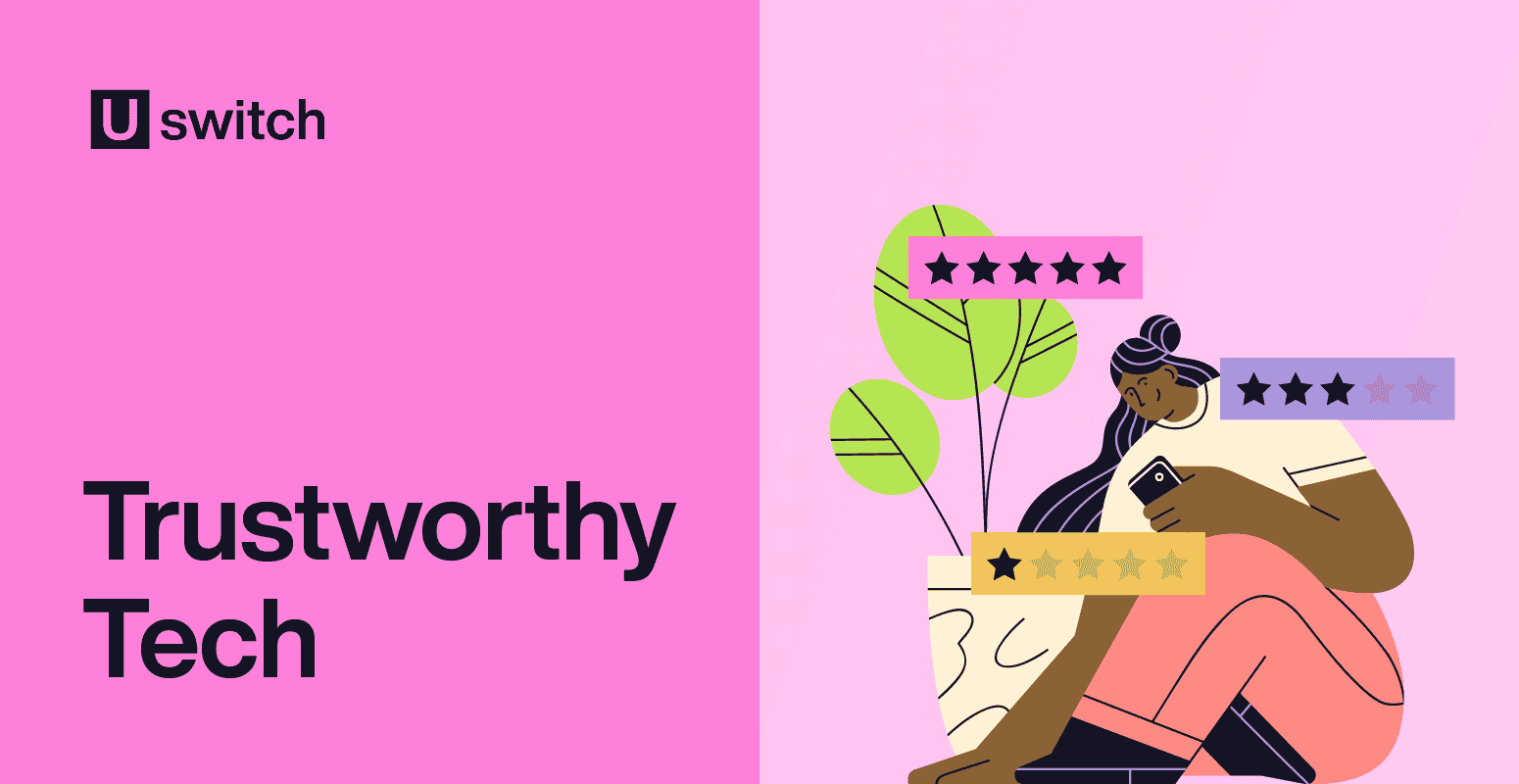 If you’ve been paying attention to the news recently, you may have noticed that there have been many stories about fake reviews online. In fact, just recently TripAdvisor announced that it had removed nearly one million fake reviews from its platform in its fight to protect users from an onslaught of misleading content. Of course, TripAdvisor isn’t the only platform suffering from this affliction. Fake reviews on digital marketplaces such as Amazon are also a major concern. In fact, Amazon and Google are facing a formal investigation in the UK over concerns they are not doing enough to protect users from fake reviews when browsing online. For any browsing online it is important to ensure you have the best broadband provider for you. Compare the best broadband deals.

How common are fake reviews?

After a lengthy investigation into fake reviews from the Competition and Markets Authority (CMA), it was found that fake reviews are all over the internet, and potentially influence around £23 billion of UK consumer spending each year. So, with over 2 billion people expected to buy goods and services online this year, which product reviews can we actually trust?

We’ve analysed the top 50 best-selling items across 20 types of gadgets, home electronics, and smart home devices according to Amazon UK Bestsellers pages, to find out which technology has the most trustworthy reviews. All the product URLs were put through ReviewMeta to estimate the share of "potentially unnatural reviews" for each product.

According to ReviewMeta, criteria for a review to be deemed unnatural include, but aren't limited to, a particular review with an "Unverified Purchase", one that shares "repetitive phrases with other reviews of the same product" or those that are "written by a reviewer who has only reviewed this brand".

From this, we were then able to determine which of Amazon’s best selling technology you can actually trust, based on its rating.

Our analysis revealed virtual reality (VR) headsets to be the most trusted tech in online marketplaces, with 98% of natural reviews across 47 VR products. See which other tech categories came out on top with the most natural reviews below.

How to spot the difference between authentic and fake online reviews

Many platforms have developed automated tools to identify and remove reviews that are clearly fake. However, as sellers become more sophisticated in how they write these fake reviews, it’s become harder for platforms to root them out.

That’s why it’s important that we learn how to detect these fake reviews. Although they are becoming harder to spot, with practice, we can learn about the deceptive methods they use and how to detect them. Here we offer some tips on how to spot the difference between authentic and fake reviews online. 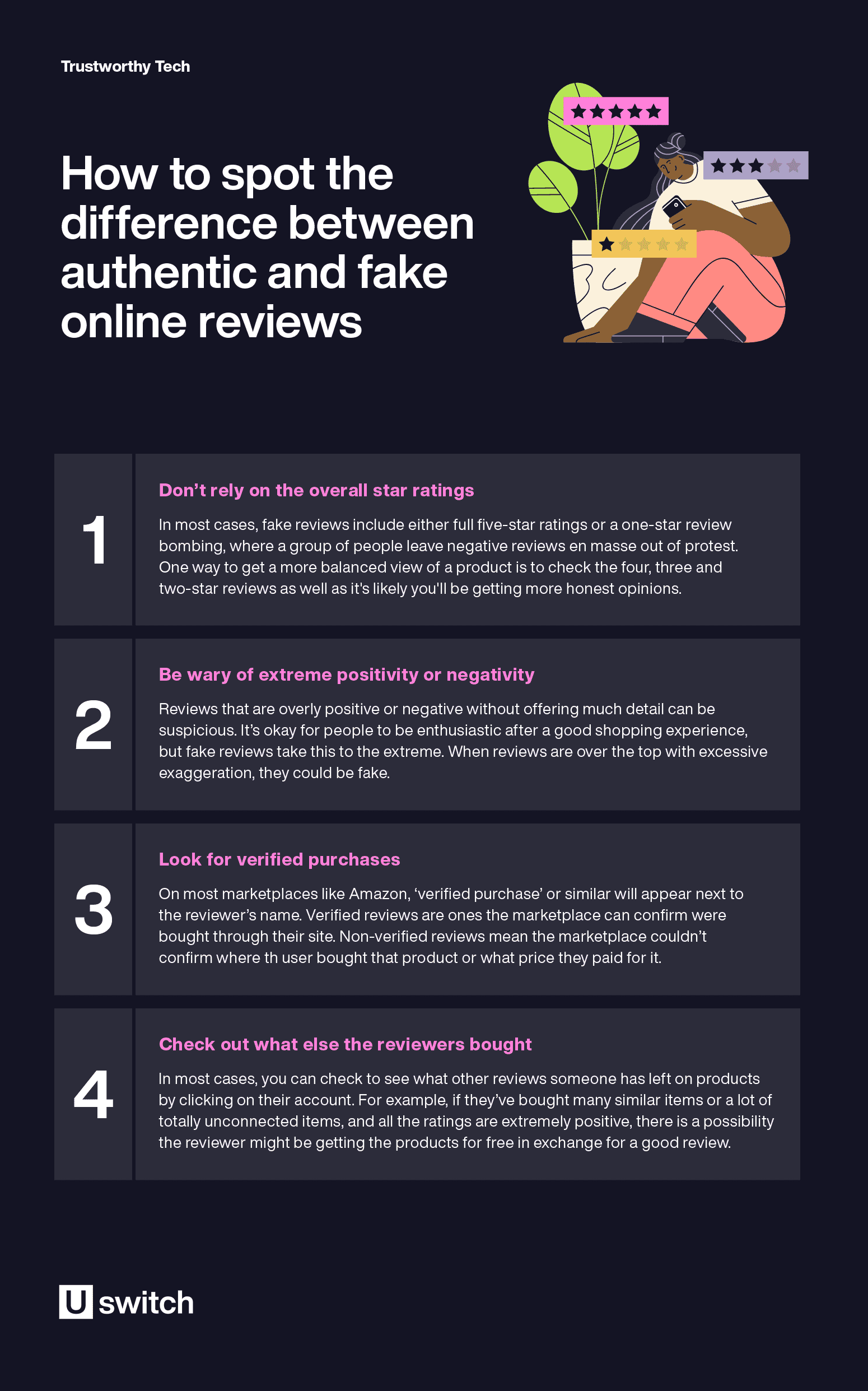 Is it illegal to buy fake reviews?

The good news is that writing fake online reviews could be made illegal under plans to crack down on firms deliberately ripping off customers. According to the UK Government, under the new laws, the Competition and Markets Authority (CMA) will gain new powers to tackle subscription traps and fake reviews. But in the meantime, it’s important for shoppers to stay vigilant when it comes to spotting fake reviews.

For big purchases such as your phone, it’s not worth taking any risks, that’s why at Uswitch we only supply products from the most trusted and recognised providers. To learn more and see our latest mobile contract deals click here.