Whilst every country has reacted differently to the COVID-19 breakout, the vast majority enforced some form of lockdown in March and April, forcing citizens to remain indoors. As a result, people around the world have had to find ways to amuse themselves at home.

Here at Uswitch, we’ve analysed Google search trends around the world to determine the most googled video games during lockdown. From nostalgic classics to virtual board games to the latest video game consoles, these are the most searched quarantine gaming terms.

Once the best selling game of all time, The Sims has seen a resurgence of search traffic as people attempt to fill their time in lockdown. In the UK, searches for The Sims games increased by 186% from February to March. That's an extra 376,200 Google searches in one month! The bulk of searches (210,500) were specifically for The Sims 4, the latest instalment of the iconic game.

However, the UK isn't the only country looking to virtually escape to The Sims world where there's no social distancing required. March saw a significant increase in searches for The Sims in Germany, Italy, Spain, France and Ireland. Spain topped the charts with a staggering 245% increase.

While Ireland came in second place for the biggest percentage increase in March, in actual terms, it only generated an extra 21,140 searches. In comparison, France ranked third with an increase of 196% for sims related searches, resulting in an extra 279,500.

Meanwhile, Italy saw the lowest search volume increase of 81%, however still more actual searches than Ireland overall with 40,480 extra searches in March. Therefore, Ireland might be taking up the game more in lockdown but it isn’t ready to be crowned Europe’s biggest Sims fan quite yet.

Only the USA recorded an increase in search traffic from March to April (17%). However, the UK, France, Spain, and Ireland still recorded at least double the monthly average search volume in April.

If you are worried that your internet speed can’t handle downloads, The Sims 4 is currently one of the fastest games to download. See which other games can be downloaded the quickest with our game download times guide. 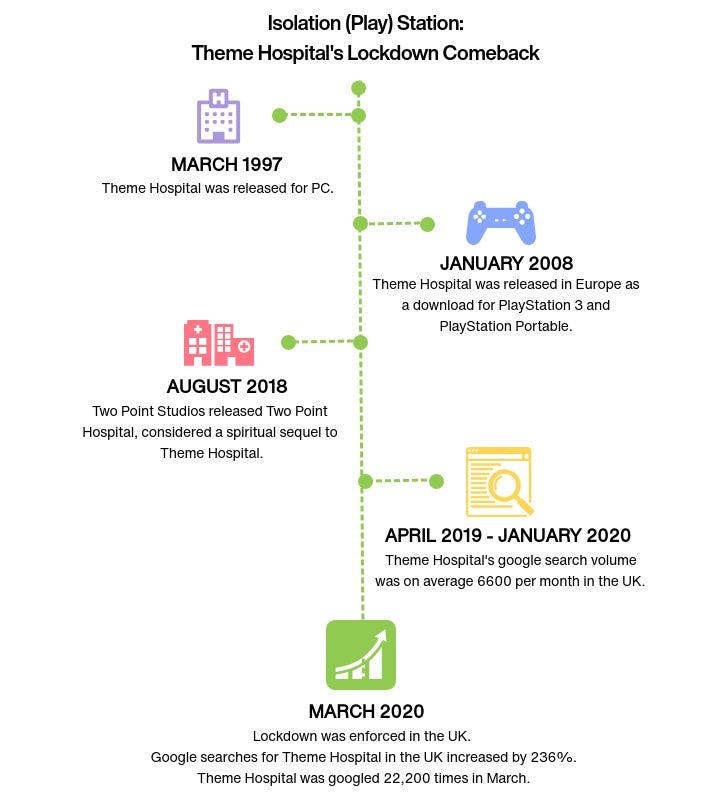 90s classic hospital game Theme Hospital made a lockdown comeback. Theme Hospital had an average monthly UK search volume of 6600 between April 2019 and January 2020. However, as COVID-19 hit headlines in February searches for Theme Hospital almost doubled. In March, searches increased another 83% to 22,200. That’s 235% more than the monthly average. Not bad for a game released in 1997.

Theme Hospital wasn’t the only legendary build simulation game that experienced a surge in lockdown searches. As UK citizens looked for ways to switch off from the news, nostalgic games Zoo Tycoon, Rollercoaster Tycoon and Theme Park World saw a combined increase of 378% in UK searches in March compared to February.

Not only are people in the UK searching for games to play, they are also googling the latest game consoles to play their games on. 4,445,180 searches were recorded in March for search terms related to Nintendo Switch, PlayStation and Xbox, three of the UK's most popular consoles. That's an increase of 151% (2,678,600 searches) from February. Combined searches increased a further 41% to 6,290,090 searches in April.

Although Xbox searches had the lowest percentage increase of 66%, in March, Xbox recorded similar traffic levels as experienced during the 2019 Black Friday sales and Christmas period. In April, Xbox traffic surpassed even Black Friday with 778,450 searches.

While the Nintendo Switch launch of Animal Crossing in March was always going to be popular, reviews on the official Nintendo Switch website suggest that it has become many people's go to game of choice during Quarantine, likely contributing to the 550,000 UK March searches and the 3,350,000 US March searches.

The US experienced similar game console search trends. 16,670,340 (170% increase from February to March) search terms were recorded during March relating to Nintendo Switch, Playstation and Xbox. In April, searches increased to 29,274,020 (76%).

Like the UK, PlayStation saw searches more than double in April compared to February, while Xbox recorded the lowest increase in search volume compared to competitors. The Nintendo Switch was the US lockdown console of choice, with a 592% from February to April.

Due to the increase in demand, consumers have experienced Nintendo Switch shortages across the US and the UK, with the console sold out at most retailers, including Amazon and Game. However, despite COVID-19 slowing production lines, PlayStation fans didn't have to worry as it was released in November. Check out our PlayStation 5 review.

While the UK is reliving their youth through favourite pastime video games, many are reconnecting with online versions of their childhood board games.

Similar traffic was recorded across the pond in the USA with 'online board games with friends' searches increasing 12,556% from February to March.

Buying and playing more games online has meant it is more important than ever to have a good broadband connection at home. Check your broadband is up to speed and take a look at our latest broadband deals to find out if there are faster services at a cheaper price in your area.