For many people with big plans and small bank accounts, the best place for them to turn to for help is crowdfunding. These sites help thousands of individuals and businesses every year to get the resources they need to thrive. But with so many out there, which one do you choose to fund your project?

Crowdfunding is a popular tool that works by asking a large number of people for a small amount of money that they can use to either invest or donate to a crowdfunding project in return for equity or rewards, such as merchandise. This method of fundraising has supported over 6 million projects in the past year, with sites such as Kickstarter and Crowdcube now central to many business plans.

From new creative projects to investing in existing businesses, the broadband team at Uswitch have analysed the fundraising credentials of 15 of the world’s most used crowdfunding sites to reveal the best and worst sites for crowdfunding around the world, and where you should donate your money.

The world’s most searched-for crowdfunding sites 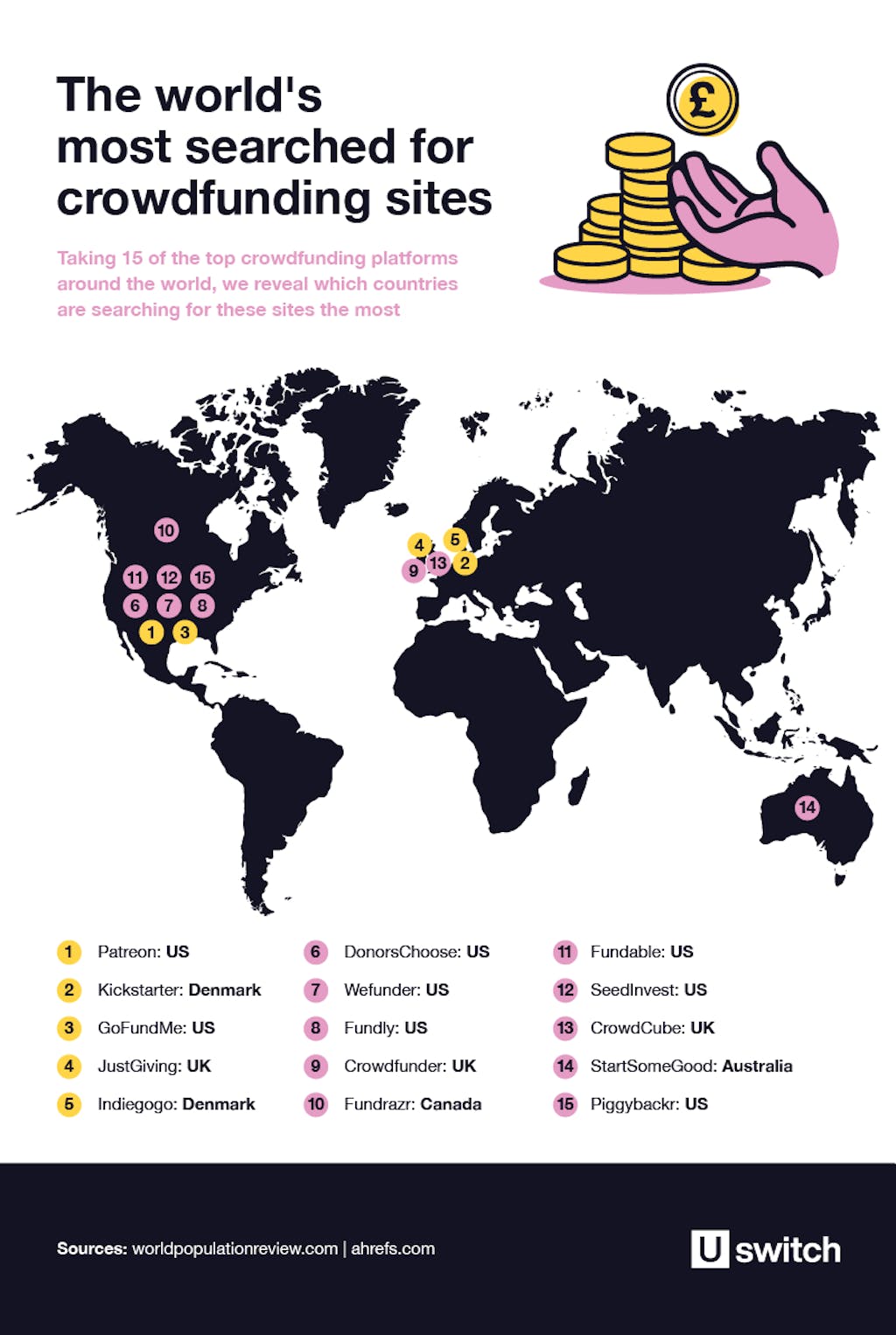 With searches for the term ‘donate’ increasing by 28% on Google Trends in 2020, charitable habits around the world have exploded as major life events have encouraged people to become more giving and spontaneous in their donations.

From popular sites like GoFundMe and Patreon to lesser-known sites such as SeedInvest and Fundly, citizens of the United States use crowdfunding more than any other country, with eight of our seed list sites being searched for the most in the US.

This could be for a variety of factors — for example, the sites that originated in the US have created more of a buzz on the ground, or because US citizens have the third-highest average wealth per adult in the world, and therefore more money to spend on causes close to their heart.

Meanwhile, creative project supporters, Indiegogo and Kickstarter were both searched for over 20,000 times on average per month in Denmark. The country is known to be one of the most innovative and creative countries in the world, so it doesn’t seem surprising that the Danish donate to creative crowdfunding platforms the most.

JustGiving proved popular in the UK, with over 64,000 searches on average per month in the past five years for the charity site, along with investment sites Crowdfunder and CrowdCube.

A focus on the UK: the most-searched-for crowdfunding platform in UK cities

With most smaller fundraising platforms gathering much of their support from donors in the US, the Uswitch broadband team wanted to take a look at how well the better-performing crowdfunding platforms in the UK did and if we could gain more understanding on the habits of donors there.

Using Google’s Keyword Planner and Google Trends data, we were able to distinguish GoFundMe, Kickstarter, JustGiving, Indiegogo and Patreon as the most popular sites across the UK.

Patreon was the most popular crowdfunding site in Brighton. But as a city that attracts thousands of artists, musicians and creatives every day due to its vibrant cultural scene, it seems hardly surprising that its biggest support is for creative projects. Patreon also topped the list in six other cities: Glasgow, Portsmouth, Newcastle, Plymouth, Sheffield and Stoke-On-Trent.

Coming in joint second place was GoFundMe and Kickstarter, both ranking top across five cities each.

GoFundMe took top spot in some of the UK’s largest cities including Manchester, Bristol, Leeds, Birmingham and Liverpool. GoFundMe is mostly popular with charitable fundraising efforts and social causes, with funds raised for Gianna Floyd, George Floyd’s daughter, being the most popular fundraiser on the site this year.

Kickstarter, meanwhile, was popular in cities including Oxford, Cambridge, Nottingham, Norwich and Aberdeen. The small cities have built a reputation as some of the best tech hubs in the UK thanks to its strong computing and healthcare sectors, and could perhaps be why Kickstarter, the fundraiser that helps to bring creative projects to life is the most popular. Kickstarter’s most searched for fundraiser was The Wonderful 101, a remastered action-adventure game that was financed through crowdfunding and raised over US$2.25 million.

JustGiving, the global platform for giving, came top in four cities including York, Cardiff, Leicester and Coventry. The fundraiser that everyone searched for this year was Captain Tom Moore’s 100th Birthday Walk for the NHS back in April 2020. To date, the fundraiser raised £32,796,355 and has seen the Captain become ‘Sir’, as he was knighted by the Queen for his charitable contributions.

The final platform on our list was Indiegogo, which came top in just London. Created to help innovations in tech and design gain support from entrepreneurs, campaigns related to e-bikes and scooter schemes are particularly popular on the page and saw lots of financial backing throughout 2020.

Crowdfunding Index: Which sites are the best for crowdfunding? 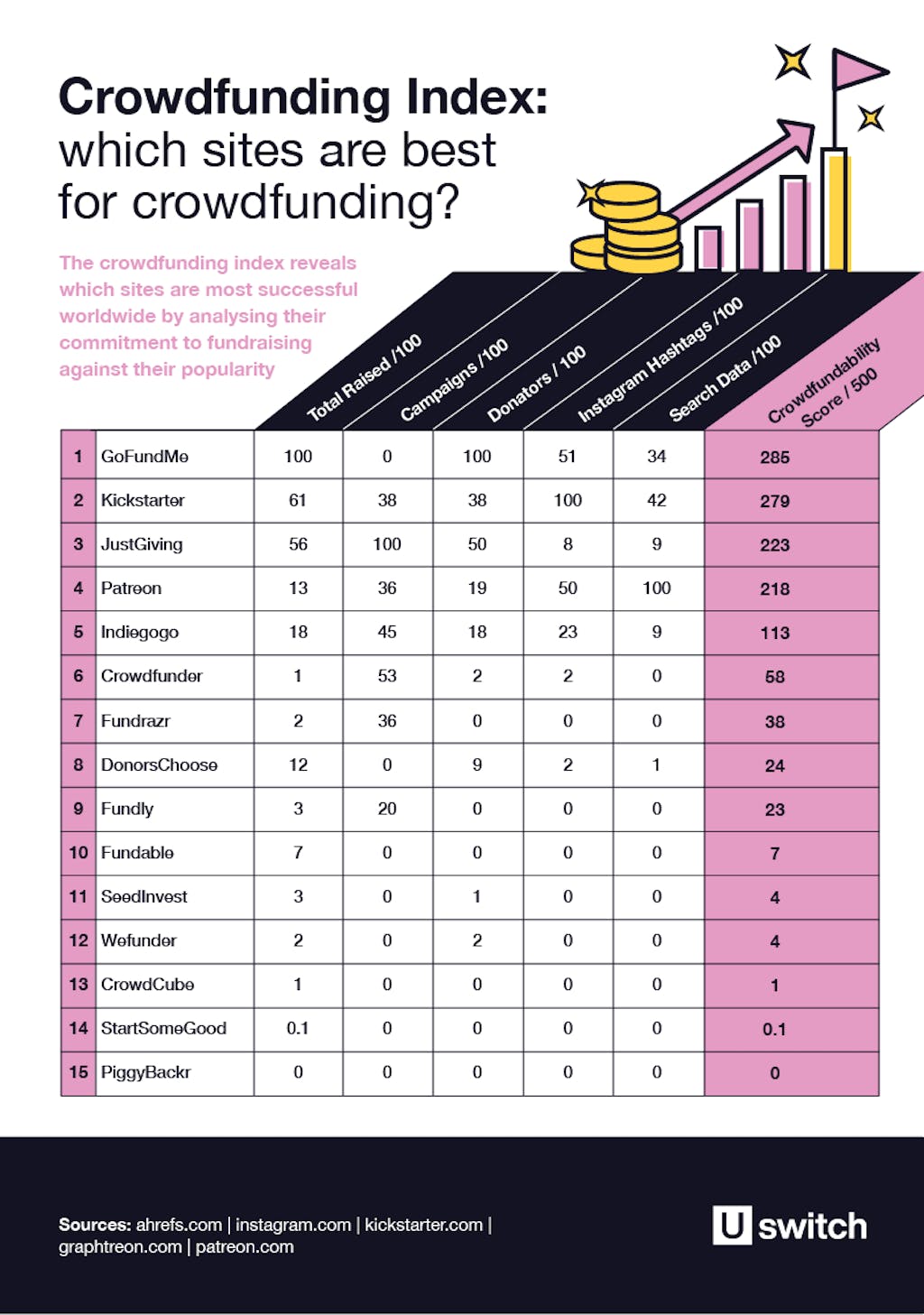 To gain a better understanding of the successes of the most popular crowdfunding sites, we developed the Crowdfunding Index. Taking our original seed list of the 15 most popular crowdfunding sites, we analysed their commitment to fundraising using a min-max normalisation method, based on five credentials: total money raised, number of donations, number of campaigns launched, Instagram hashtags and search volume data to give a final score out of 500.

GoFundMe, a site known for its charitable fundraising, topped the list scoring 285 out of a possible 500. The website has raised over $9 billion since its launch in 2010, with over 150 million donations made to the site in the last decade. GoFundMe has become a household name for fundraising projects over the last ten years, with support in everything from business projects to social causes such as Black Lives Matter. Over the past year, GoFundMe donations have hit a global high with the site raising $625 million dollars for COVID-19 relief and frontline workers.

Ranking in second place is one of GoFundMe’s biggest competitors, Kickstarter. Scoring 279 out of a possible 500 in our study, the site has had over 1.6 million searches on Google around the world by users wanting to fund creative projects. The site has raised over $5 billion dollars and funded 200,000 projects so far with the most popular category of projects funded being games. Interestingly, funding for creative projects proved popular in our study with Indiegogo and Patreon ranking fourth and fifth on the index.

Proving most popular as an investment crowdfunding site, Crowdfunder scored a 58 out of a possible 500 on the Index thanks to its 267,000 projects it has funded. Crowdfunding is an increasingly popular way to secure long term futures for businesses, and Crowdfunder seems to be topping them all, with over £100 Million raised up and down the UK by crowdfunding projects.

Ranking at the bottom of our list is the crowdfunding site Piggybackr, which ranked the lowest in all of our five criteria. Created for students and youth teams to fundraise for their schools, projects, and causes, the site is lesser-known than its competitor, DonorsChoose, due to a lack of social media presence. This has allowed DonorsChoose to take the lead, raising over $1 billion since the site launched in 2007.

What crowdfunding platform is best for my fundraising campaign? 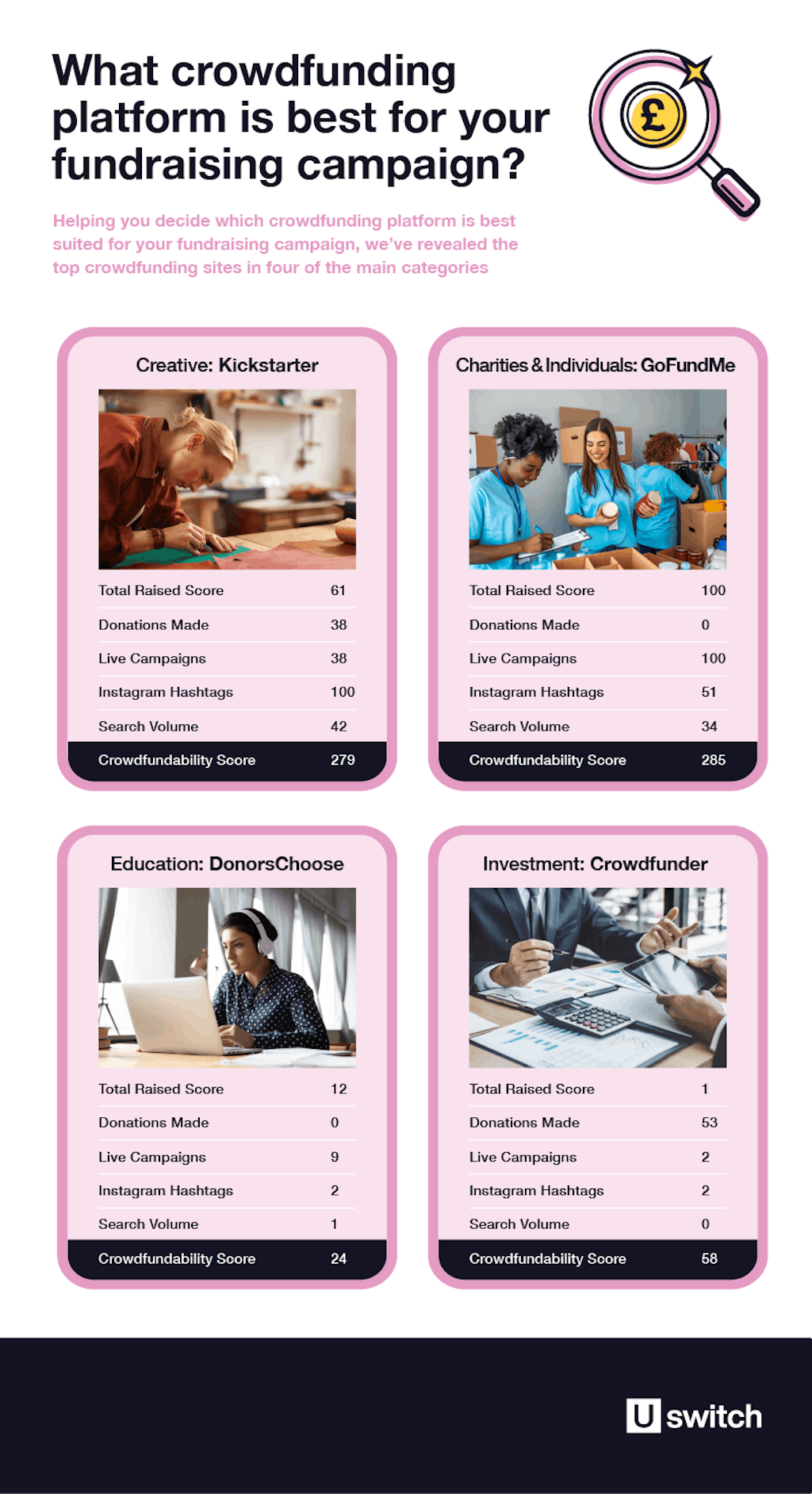 For those who are wishing to set up their own crowdfunding campaign, it may be tricky to initially work out which fundraising site is most suited to your efforts.

Whether it’s giving back to your local community or bringing your own creations to life, deciding on what you’re fundraising for may be the easy part. Have you considered the importance of donations made through social media channels, or how well known the platform is in your area already?

We’ve gathered the data for you to help you decide which fundraiser is best for your fundraising campaign and have also featured the top performing platforms for each category.

For charity and individual crowdfunding sites, StartSomeGood, Fundrazr, JustGiving and GoFundMe were compared, with GoFundMe coming out on top overall as the best platform.

For creative, tech and innovation platforms, Kickstarter came up trumps in almost all categories against its competitor, Patreon, with 9,090,384 more supporters and a stronger social media presence with 969,163 more hashtags. You may want to think twice before assuming Kickstarter may be the best crowdfunding platform for your campaign, however, as our previous search data found that Patreon was the platform being searched for most worldwide, with an average of 3.8 million monthly searches total.

For business and investment crowdfunding sites, Indiegogo was found to be the most popular platform with over 9 million donors on the site and 444,721 Instagram hashtags, as well as being London’s favourite platform. However, Crowdfunder did have lower transaction fees (1.9 percent) and platform fees (0 percent) than Indiegogo’s at 2.9 percent transaction fees and 5 percent platform fees*.

*A transaction fee is what is charged for processing card payments on behalf of your fundraiser, whereas a platform fee is what the platform takes to help invest funds back into its site to support its other projects.

Taking a seed list of the top 15 crowdfunding sites worldwide, Uswitch have analysed data sets in 20 of the world’s most charitable countries* to determine which sites are the best when it comes to crowdfunding. We based it on the following five credentials:

*The 20 countries used were all countries with enough available stats for the data.

To determine the seed list of apps that would be used as part of this study we took 15 of the most common apps from the top-rated lists by Hubspot, GoFundMe, and Fundly; being careful to include more than one app for each category, (e.g. Piggybackr, Fundly and DonorsChoose for education).

The world's most searched for crowdfunding sites

We used AHrefs to gather global average monthly search volumes for each site and ranked each platform from 1-15. After this, we then went back to AHrefs to determine which country each crowdfunding site in our list was most popular in.

The most searched for crowdfunding platforms in each UK city

Once we had this core group we then went back to Google Trends to see which Crowdfunder was preferred by searchers in each of our UK cities.

Crowdfunding Index: Which sites are the best for crowdfunding?

To determine which platforms were most successful worldwide, we used statistics from each of the platforms’ websites, Instagram, and AHrefs to determine five criteria to help rank each site from best to worst. These five criteria were total raised, number of campaigns launched, number of donors, average monthly global search volume and Instagram hashtags.

We then scored each site using a min-max normalisation scoring system to award points to each site based on the data we had collected. We gave the lowest piece of data 0 and the highest piece of data 1 and then multiplied each one by 100 to get a final score out of 500.

Which crowdfunding platform is best for my campaign?

Using the Index table, we then used the ranked platforms to determine which would be best for which type of campaign - e.g. Kickstarter is best for creative projects.