Films and TV shows have introduced us to many iconic properties. But can living near a famous home increase your house value and, if so, by how much? Uswitch investigates.
Share this guide

From the famous Fresh Prince of Bel-Air mansion to the suburban childhood home of Harry Potter, films and TV series have revealed some iconic properties. But, as these familiar homes have become tourist attractions, has fame affected property prices in the surrounding areas?

Intrigued by the concept, mortgaging experts at Uswitch delved deep into research to determine whether property values are affected by nearby TV and movie filming. 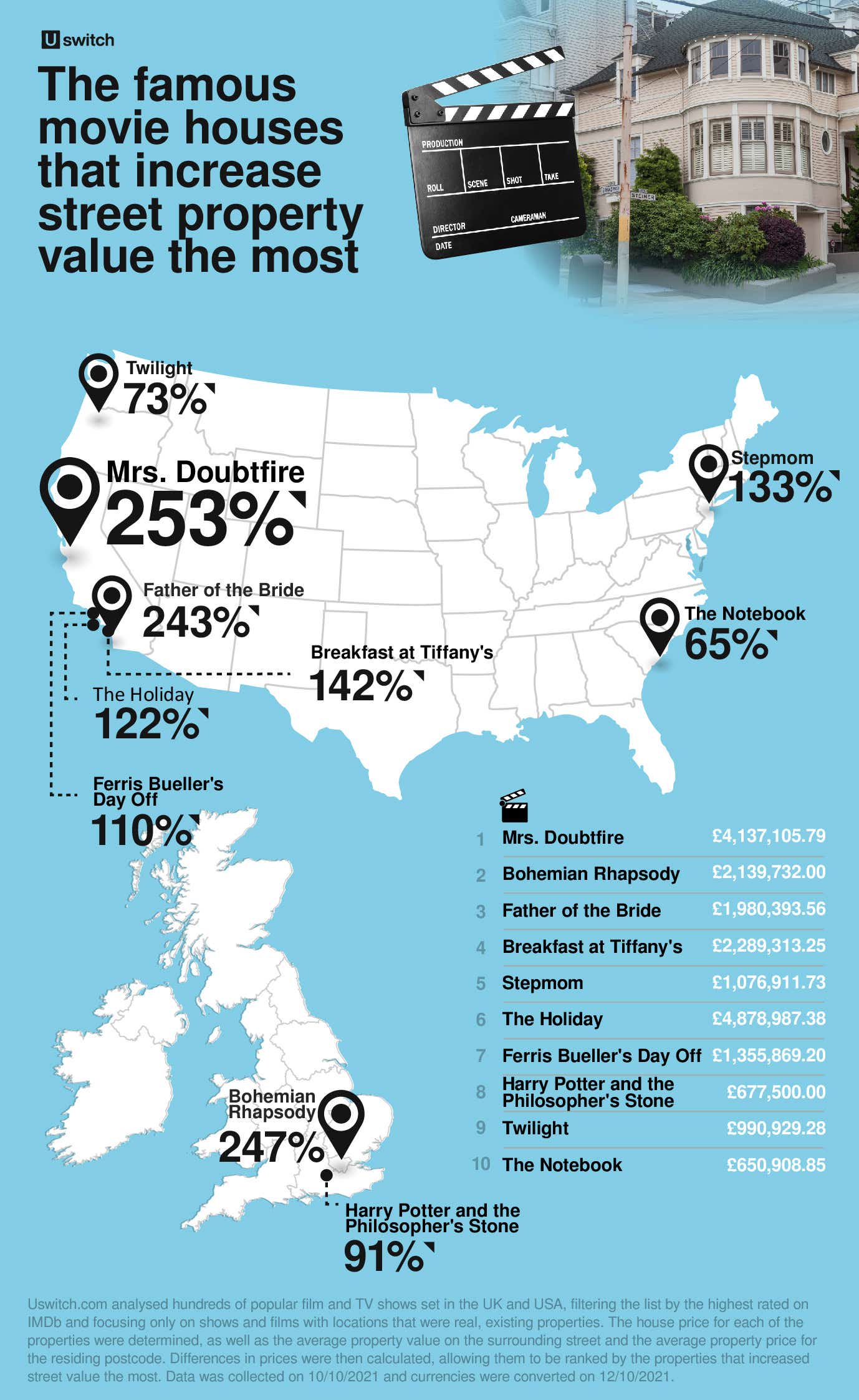 The movie home that has the biggest effect on property prices is from the family-favourite movie, Mrs. Doubtfire. Located along Steiner Street in San Francisco, the beloved Hillard home, made famous by Robin William’s unforgettable character, has increased nearby property value by a whopping 253%.

The star-studded cast of the 2018 musical drama, Bohemian Rhapsody, set up camp in the UK’s Surbiton for a week of filming at private property, Garden Lodge. Located in Ashcombe Avenue, Garden Lodge posed as Freddie Mercury’s famous Kensington home and is estimated to have increased property prices in the area by 247%.

3. Father of the Bride

Holly Golightly’s brownstone townhouse set in swanky Manhattan exists in real life at 71st Street, New York. Property prices in the area have been boosted by an impressive 142% thanks to its feature in Breakfast at Tiffany’s.

Featuring real-life friends Julia Roberts and Susan Sarandon, the third star of the award-winning movie, Stepmom, is their stunning home. Located in Nyack, New York, ‘Glenholme’ is situated within 1.5 acres of land and has increased property value by 133% since the movie’s release.

Cherished Christmas rom-com, The Holiday, features two desirable domestic locations, but we were particularly struck by Cameron Diaz’s Californian condo. Shot in Orlando Rd in San Marino, the impressive home has boosted local property prices by 122% since the movie’s release in 2006.

The Bueller residence has had several onscreen reincarnations (including Red Dragon and Not Another Teen Movie), but none are quite as charming as the original appearance in the eighties hit, Ferris Bueller’s Day Off.

Although set in Chicago, the movie was shot in Long Beach, California. The movie-famous property on Country Club Dr has boosted property prices in the street by 110%, fetching an estimated £712,304 more than other streets in the area (£1,355,869 compared to £643,564, respectively).

8. Harry Potter and the Philosopher's Stone

The exterior of the infamous Dursley residence in Privet Drive is, in fact, located in the United Kingdom in Winkfield Row, Bracknell. Featured in the first Harry Potter film, the Philosopher’s Stone, the property has since racked up next-door house prices by 91%.

The Cullen’s tree-clad dwelling in the vampire-themed movie, Twilight, has inspired a 73% price increase on next-door properties. Known as Hoke House and set within the franchise in Forks, Washington, this sleek glass house is actually located in NW Quimby Street, Portland.

We all fell in love with the mansion Noah built for Allie - that gorgeous lakeside house that provided several pivotal scenes in The Notebook. Apart from being a highly romantic setting, the property, located on Wadmalaw Island, has increased property value in the area by 65%.

The Bel-Air mansion has boosted property prices along North Bristol Avenue in Los Angeles by a tremendous 222%. The Fresh Prince, Will Smith, brought attention to the iconic mansion at the start of the nineties, and Airbnb recently welcomed fans to stay there to celebrate its 30th birthday.

Residents of Perry St., New York, have witnessed a massive property value increase of 221% since the success of Sex and the City. Set in fictional 73rd street on the Upper East Side, Carrie Bradshaw’s glamourous apartment with those iconic real-life exterior steps set the scene for many happy (and tragic) scenes with Mr Big.

Considering that Friends is one of the most-watched shows ever, with Friends: The Reunion breaking Sky One's audience records in May 2021, it’s surprising that Bedford St. hasn’t ranked higher.

Much-loved American sitcom The Golden Girls wouldn’t be the same if it were set anywhere other than the charming fictional home on Richmond Street in Miami, Florida. This iconic one-storey house has helped boost property prices in its true location, N Saltair Ave.

The San Fran Victorian house and its iconic red front door featured in the opening credits of the American sitcom, Full House, is arguably one of the most recognisable TV homes around. Perhaps that’s why it’s affected nearby property values by 81%.

Debuting the Olsen twins’ first TV appearance at just six months old, the filming of the Full House home on Broderick St. and its neighbouring properties are now estimated to fetch £2,123,525. This is £953,955 more than other homes in the area, which are estimated at £1,169,569.

You definitely wouldn’t have to look on Craigslist anymore to find the loft apartment Jess moves into on New Girl. Her apartment, Apartment 4D, is famous enough now to rake in an estimated £699,212, increasing property values in real-life location, Traction Avenue, by 66%.

Properties in the wider postcode area are estimated to be £278,094 less than Jess’ loft and are valued at approximately £421,118.

The filming of Sex Education took place along the picturesque River Wye that weaves through England and Wales. One of the show’s focal points is Jean and Otis’ home, which is a real-life holiday let: The Chalet.

Located in Symonds Yat East of Herefordshire, the recognition of The Chalet is estimated to have increased nearby property prices by 58% (estimated at £491,666). In fact, if you purchase next door to The Chalet, you may fork out £132,436 more than for a property in the wider postcode area (estimated at £359,230).

Since the quintessential British drama Downton Abbey first hit our screens in 2010, you’d be hard-pressed to find anyone who doesn’t recognise the Crawley family’s stately home from the show.

Filmed at Highclere Castle in Newbury, the success of Downton Abbey has increased the value of close-by properties by 9% (estimated in value at £644,210). If you’re looking to move close to the famous stately home, you may have to pay £54,959 more than other properties in the postcode area, which are valued at a lower £589,251.

Breaking Bad’s successful spin-off, Better Call Saul, features several locations throughout the series. But one of the most notable is the depiction of Saul’s own home in Ohama in the first episode.

Saul’s property resides in real life in Vassar Drive (also listed as Cutler Ave, due to the building’s location), but it’s made a small impact on the neighbourhood. Prices have increased by 8% (£20,322), where the estimated postcode average is valued at £254,478, and properties in Vassar Drive are estimated at £274,800.

Filmed at Westchester Place in Los Angeles, nearby properties have gained an approximate £44,564 over the general postcode area homes (£918,328 for those nearest to Westchester Place, compared to further afield properties, estimated at £873,764). When looking for a new home, it’s worth researching your potential new area to learn about the neighbourhood and to determine the cost of living. Before purchasing a property, always ensure to compare mortgages and check out the latest mortgage statistics in order to find the best deal for you.