Which popular Airbnb amenities increase listing values the most?

From valet parking to record players, properties listed on Airbnb offer a vast range of amenities to attract guests. But which favourite features increase the value of an Airbnb property the most?
Share this guide 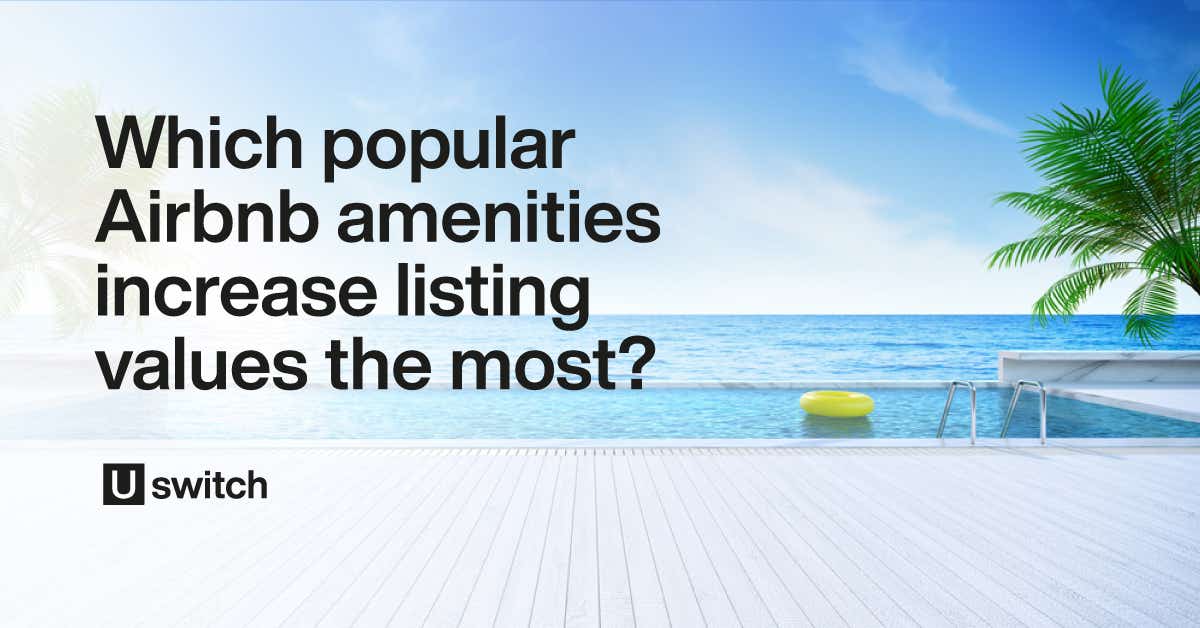 Keen to find out, the mortgage comparison experts at Uswitch.com analysed Airbnb properties located in 16 popular European cities to discover which amenities increase listing prices the most. From Oslo to Athens, find out which guest-favourite Airbnb amenities generate the highest value.

The most popular Airbnb amenities in Europe

Across all European Airbnb listings reviewed, valet parking proves to be the most valuable asset. Lucky owners who are able to offer valet parking can charge an average of €26.94 more per person than listings without this service. Valet parking is an even more lucrative service in some cities than others, such as in London, where it increases listing price by an average of €43.50.

The second most valuable feature for Airbnb listings is the welcoming of furry friends. The “pets allowed” search filter can increase an Airbnb price by an average of €25.67 per person. Even though pet-friendly properties might not earn as much extra cash as offering valet services, it’s certainly one of the most popular features across many European cities. Airbnb owners in Athens, Lisbon, London, Madrid, Paris, Prague and Rome can charge anywhere between €7.70 and €65.08 extra for allowing pets into their rentable homes.

A surprising contender in the most valuable Airbnb features is a record player. As the 10th most popular amenity across Europe, the value of including a turntable seems at odds with the practicality of valet parking or pet-friendly homes. Yet, featuring a record player can increase the rental price by €6.65 per person (or up to €18.50, if you’re staying in Brussels). Not only do turntables add a unique flourish to a property, but their presence encourages guests to engage with one of life’s most enriching experiences: listening to music.

There is a wide variety of popular amenities that differ across Europe. From fire pits to breadmakers, let’s take a closer look at which features increase Airbnb listing values the most in popular European capital cities. 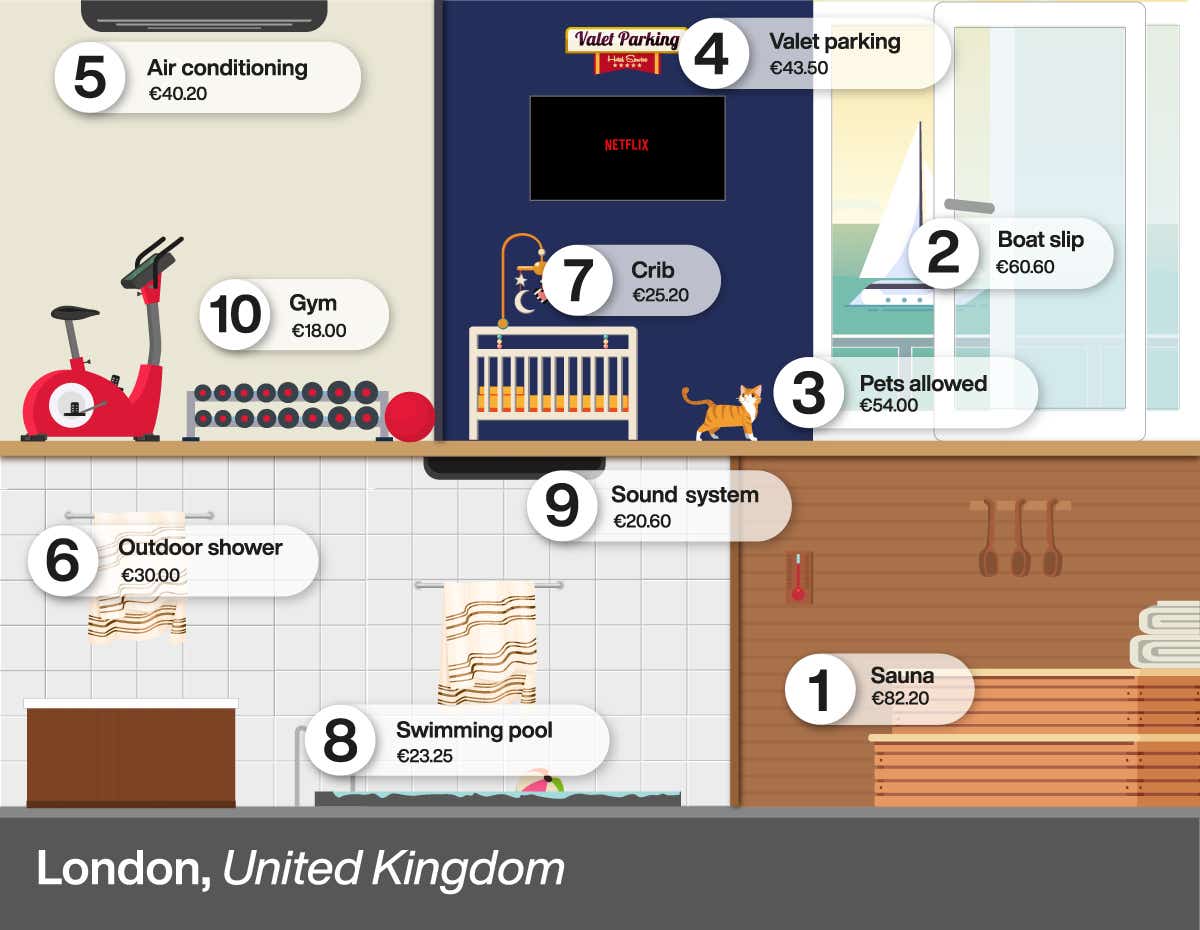 Despite their relative proximity to one another, the highest value amenities for Airbnb listings differ greatly between Dublin and London—both in price and with in-demand features.

While air conditioning is the top-valued amenity for Dublin properties, this feature may only increase Airbnb fees by €16 per person. That’s €2 less than London’s 10th most popular feature—a gym, which can increase rental prices by €18.

London’s most prized Airbnb amenity is a sauna, which is comparatively more profitable than air conditioning in the Irish capital. Owners offering a sauna can charge an impressive €82.20 extra, and this high demand likely reflects the popularity of spa city breaks in the English capital. 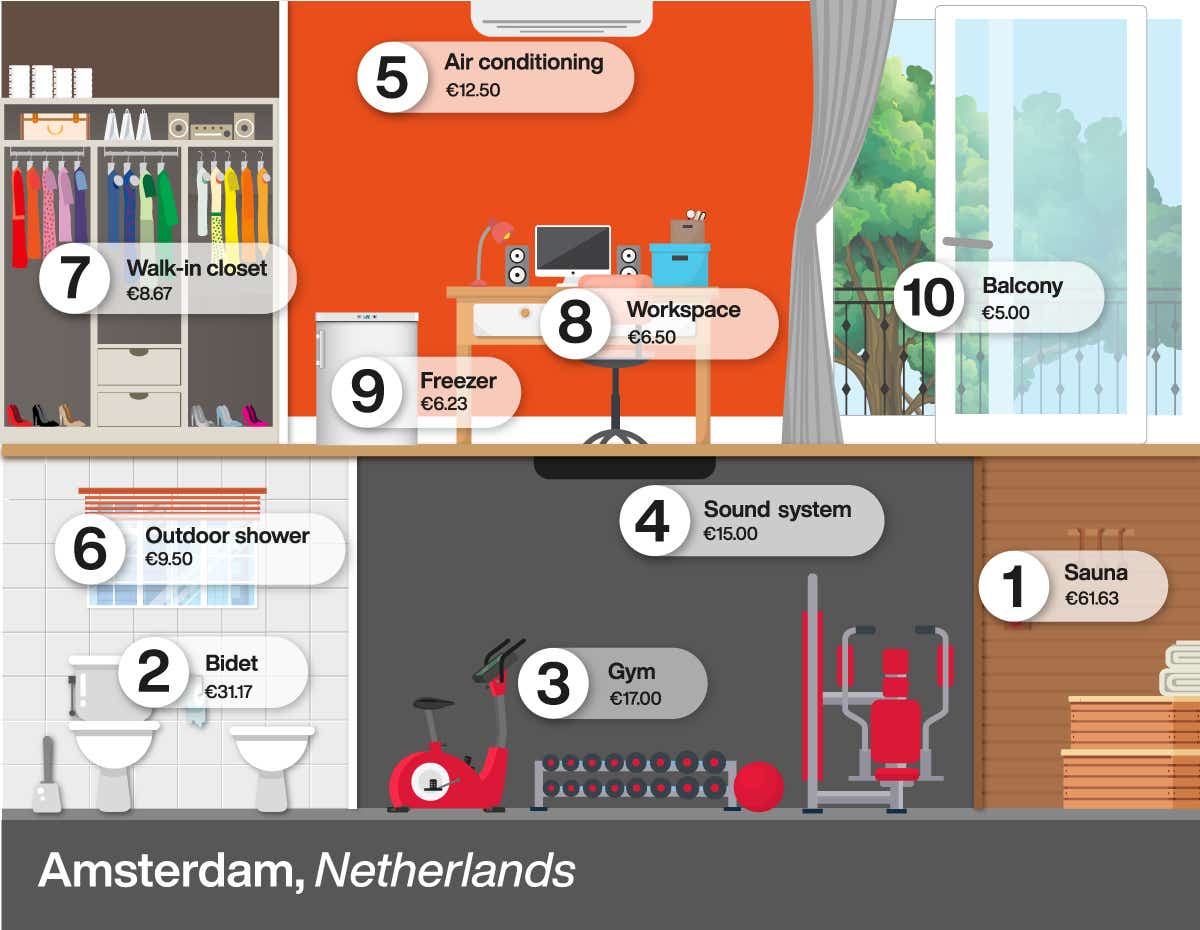 From walk-in closets to nearby laundromats, the scope of amenities vary greatly in northwestern Europe. Price is also a variable factor; the most popular Airbnb amenities in the Netherlands attract a much higher price than those included in Norway, Latvia or Denmark.

Airbnb properties in the Dutch capital that feature a sauna (the most popular amenity in Amsterdam) can attract an extra €61.63 per head than ones without. Sauna experiences are widely enjoyed in the Netherlands, which suggests the reason for their popularity in domestic settings.

Comparatively, beachfront properties—the most popular Airbnb feature in Oslo—may only gain an extra €23.56 than inland listings. The Norwegian capital has a thriving fashion scene, however, which may contribute to the demand for walk-in closets in Airbnb homes (the second most profitable amenity, increasing prices by €19.17 per guest).

Similarly, listings in Latvia's capital, Riga, that feature a pool may charge €20.33 more per head. In comparison, a beachfront property here is only worth an additional €2. Over in Copenhagen, beachfront properties are a mid-value amenity for guests, charging a small additional fee of €9.75. The real value in an Airbnb home in Denmark’s capital, however, comes from a breadmaker. As a loaf of bread here costs 51% more than the European average, paying the additional €11.57 for Copenhagen’s most popular amenity appears to make sense. 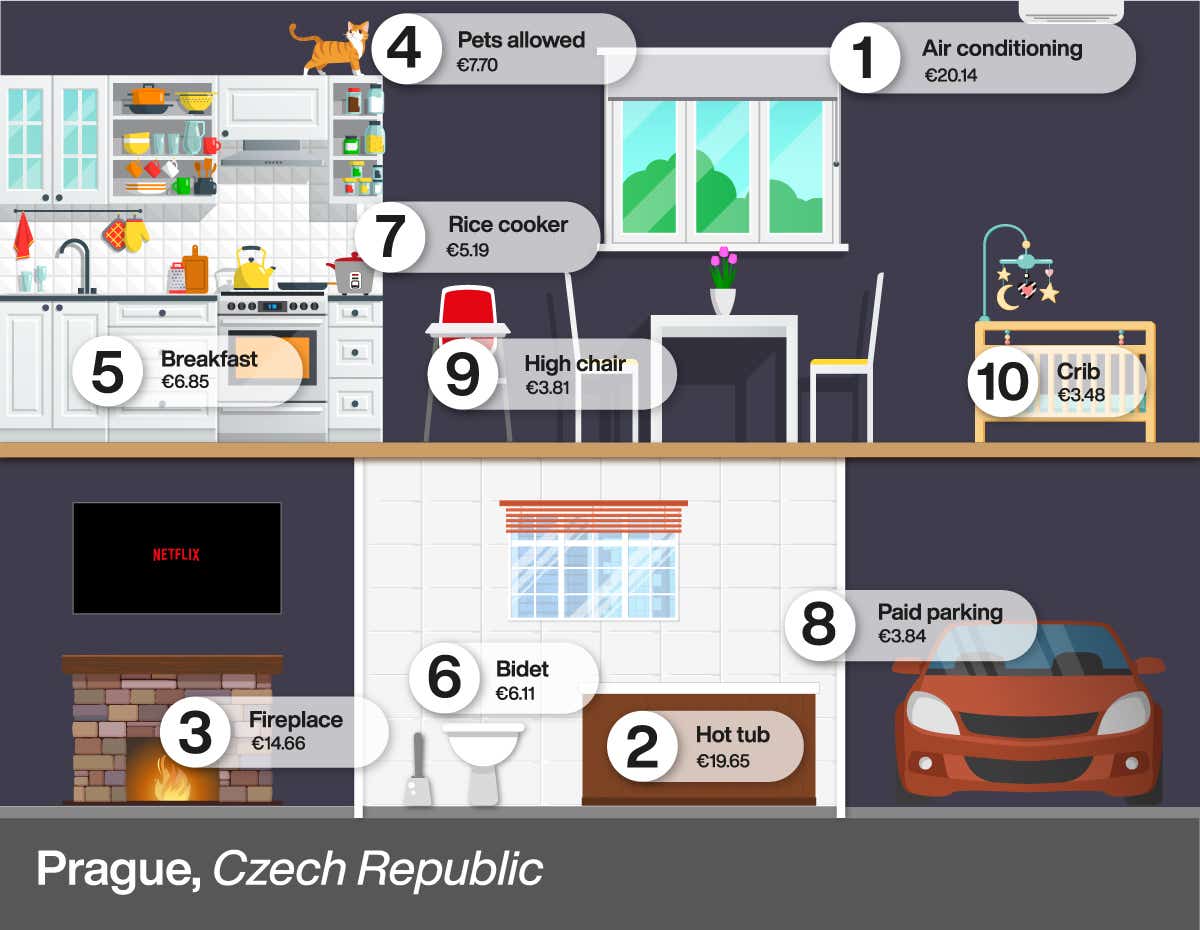 Air conditioning proves to be the most valuable amenity for visitors in both the Czech Republic and Austria. Despite temperatures only reaching the mid-20s during summer months, these landlocked countries can suffer without a coastal breeze to cool their cities down. As a result, Airbnb listings in Prague may be valued at €20.14 more with air conditioning features, whilst owners of similar properties in Vienna can charge €14 more per guest for cooler rooms.

Heading to the west of central Europe, guests in the Swiss capital of Zurich are hankering for a workout. Lucky Airbnb owners here can charge around €71.04 more for properties featuring a gym. Interestingly, Zurich listings that feature air conditioning are the third most popular, but are even more expensive than those in Prague and Vienna—increasing rental value by €26.88. 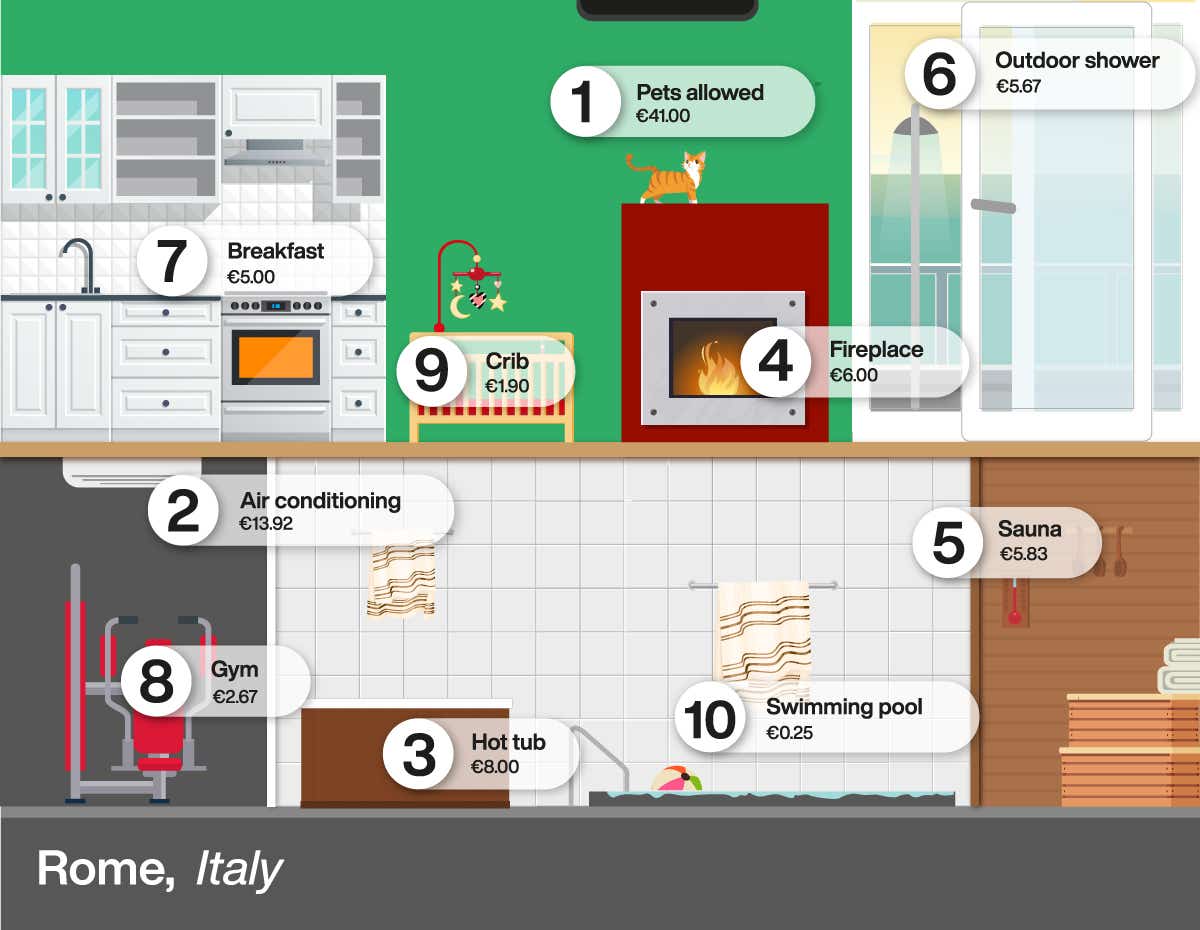 The “pets allowed” filter is most profitable for Airbnb owners in southern Europe—especially in Rome where it’s the most popular feature. Not only does Italy have many affordable Airbnbs within reach of famous landmarks, but pet-friendly properties in the capital can charge an extra €41 per person. In comparison, being the second most valuable asset in Spain and Portugal, guests may have to fork out an additional €38.33 in Madrid and €17.50 in Lisbon to bring their beloved pets on holiday with them.

More valuable than pet-friendly properties in Portugal and Spain, however, are saunas. Airbnb rentals in Madrid can demand an additional €50, whilst in Lisbon these can cost an extra €31.46. Property owners in the Greek capital can charge the most for amenities, however, as demands for pools in Athens can rake in an extra €53.50 per head. Athens is one of the few European locations where you can swim year-round, thanks to its warm climate. 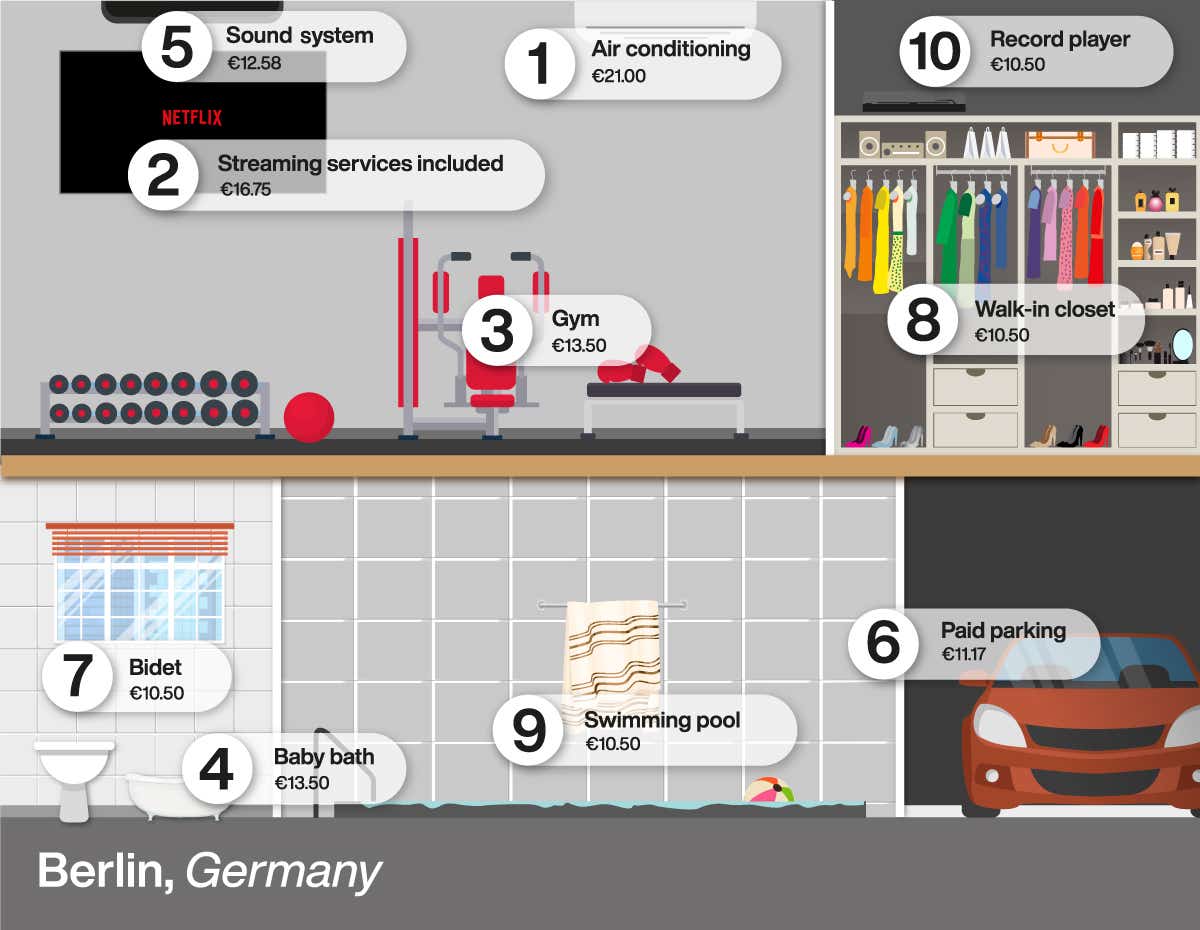 With warm summers in the landlocked country, it’s no surprise that Germany’s most popular Airbnb amenity is air conditioning. Berlin properties (recognised as some of the most beautiful in Europe) offering this feature may charge an additional €21 per person. But, over in Belgium, the focus is on fire pits. Airbnb hosts that include fire pits in their Brussel properties may be able to pocket an extra €25 per warmed guest.

Fire pits are also a popular choice in the French capital, where these can increase Airbnb prices by €54.33. For Parisian guests, however, it's the sauna that is deemed most valuable. Airbnb listers in Paris may up their prices by €83.83 per head (the highest increase from an amenity in all of Europe) if a sauna is featured.

If you’re interested in becoming an Airbnb host, or if you want to transfer from traditional landlord duties to Airbnb lets, Uswitch’s mortgage expert, Florence Codjoe has some advice to share:

“With Airbnb opportunities becoming increasingly appealing, it’s worth taking the time to evaluate the pros and cons of hosting your unused space before committing.

Unlike traditional renting, where you manage just one tenant over a long-term let, Airbnb hosting means that you may have multiple tenants a week, month or year to look after. Although this can help you create a diverse portfolio of tenants in a short amount of time, multiple occupants can mean higher management demands and increased expenses.

Before opening up an Airbnb stay, be sure to weigh up all the pros and cons first. Do your research and get in touch with existing hosts to find out what it takes to rent out your home.”

The experts at Uswitch.com were intrigued to uncover which guests’ favourable amenities can increase Airbnb values for the host.

To do this, a seed list of European countries was generated and 390,000 rows of the Airbnb data was collected from Inside Airbnb which sources publicly available information from the Airbnb site, including more than 70 attributes.

Rows with missing data such as no beds or price were removed, bringing the number of rows in the data down to 250,000. Some countries were excluded from the study due to inaccurate results; i.e. Sweden was removed due to poor data quality resulting in illogical results.

All prices (cost per night) were converted from their local currency to Euros. A new column was created which was the cost per night divided by the number of beds available to obtain a cost per person.

*All data was collated in January 2022 and is accurate as of then.