Samsung Galaxy S10, S10 Plus and S10e: everything you need to know

Ten years in the making, Samsung’s latest Galaxy S phones have been officially unveiled, with a suite of new features and improvements from last year’s models.

Dubbed the S10e, S10 and S10 Plus (in ascending order of price and range of features), the big news is that these handsets are the first-ever Galaxy phones that allow you to wirelessly share your battery power with other compatible devices.

They’re also home to smarter cameras that make greater user of artificial intelligence to help you get studio-quality shots. And they have impressive ultra-wide lenses that let you take stunning shots of the great outdoors.

And in another first, the range introduces us to Samsung’s frankly stunning, eye-poppingly vibrant Infinity-O ‘edge-to-edge’ screens.

Winningly, these pretty much span the entire front of the S10 phones, with just a tiny, almost completely unnoticeable pinhole cutout for the front-facing camera.

So that’s the snapshot view of the S10 range. Read on and we’ll take a closer look and all their features. We're your one-stop shop to get you up to speed on everything the S10 line has got to offer.

Take a look at deals for the Samsung Galaxy S10.

Prefer the top-of-the-range model? See our pick of Samsung Galaxy S10 Plus deals.

Like the sound of the most budget-friendly option? Here's a range of Samsung Galaxy S10e deals. 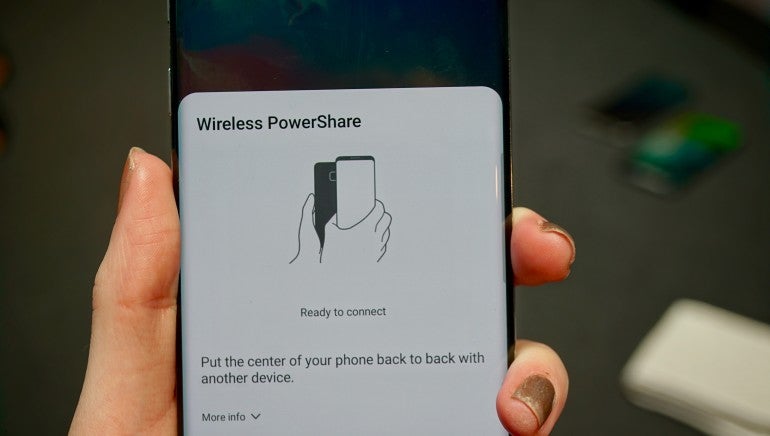 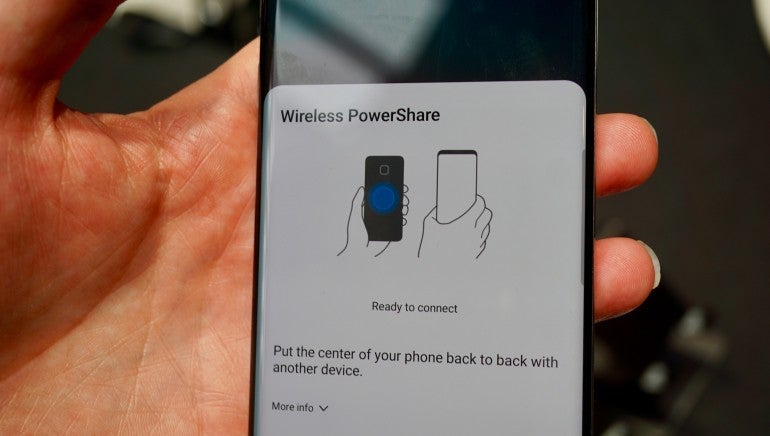 As we’ve mentioned, all three phones in the S10 range allow you share your battery power with friends and family who are in need of a boost.

Compatible with any phone that supports wireless charging, all you need to do is stack the phone you want to charge on the back of an S10 phone and it’ll start to transfer power instantly.

You can also use it to charge a Galaxy Watch or the natty Galaxy Buds wireless earphones that come free when you pre-order the S10.

With the latter, it’s just a matter of nestling the Galaxy Buds in the case supplied and placing it on top on an S10 phone. Then you’re good to go.

Some of the phones that you can charge with an S10 include: iPhone 7, iPhone 7 Plus, iPhone 8, iPhone 8 Plus, iPhone X, iPhone XR, iPhone XS and iPhone XS Max. Of course, you can also charge any Samsung Galaxy phone after the S6, as well as handsets such as recent models from Huawei, Sony and Honor.

To ensure you won’t resent sharing your precious battery power, all three phones in the S10 range are powered by large batteries. The S10e comes with a big 3,100mAh battery, while the standard S10 and S10 Plus feature 3,400mAh and 4,100mAh batteries respectively. So there’ll be plenty of power to go around.

To put the size of the S10 range’s batteries in perspective, the iPhone XS’ battery is 2,658mAh, while even the power-hungry XS Max only has a 3174 mAh battery.

And if that still doesn’t make you more willing to share, it’s worth noting that all three Galaxy S10 phones have fast wireless charging 2.0, so it’s easy to keep your phone fully juiced up.

Even better, the AI that’s at the heart of the phone cleverly ascertains and analyses how you use your phone and will shut down power-sapping apps when they aren’t in use. All of which means that running short of battery power really won’t be a problem.

Despite feeling very compact and pocketable, the S10 Plus and standard S10 pack in 6.4” WQHD+ and 6.1” WQHD+ displays respectively, each of which take up almost the entire front of the phones. Both phones’ screens are vibrant and crisp, with colours that are at times so vivid that it feels a bit like you’re seeing them for the first time.

The S10 and S10 Plus also have speedily responsive Ultrasonic fingerprint scanners embedded with the screen that work well in harsh weather conditions, such as rain and cold.

Built with state-of-the-art biometric scanning technology, these register every ridge and groove of your finger so they’re super watertight. Thereby making it harder to spoof using 2D images and resulting in what Samsung claims to be ‘vault-like security’.

Samsung Galaxy S10 Plus fingerprint scanner in use

And there’s another benefit to locating the fingerprint scanner within the screen, instead of under the rear camera lens where you’d normally expect to find it. Just as importantly, it means you’ll no longer end up accidentally smudging the lens when you reach around to unlock your handset.

The bijou S10e is even more pocket-friendly, but still makes room for a 5.8” FHD+ screen. Unlike its bigger brothers, the S10e’s fingerprint scanner sits on the side on the phone. Where it’s easy to reach and, once again, means you won’t inadvertently smudge your camera lens when you unlock your phone.

How does the S10 range stack up against last year's Galaxy S phones? Find out when the phones go head to head in our Samsung Galaxy S10 vs Galaxy S9 comparison.

Better cameras. And more of them

The S9 range came with a dual-pixel, dual aperture camera. That same highly rated technology is still present and correct this time around. But we all know that more is more when it comes to cameras.

With that in mind, Samsung has fitted the S10 and S10 Plus with triple-lens rear cameras, including a zoom lens, a wide lens and, for the first time on an S series phone, an ultra-wide lens. So at last you’ll be able to capture the entire scene for spectacular panoramic shots.

Despite the S10e’s keen price point, it still comes with a dual lens camera, which pairs a wide lens and an ultra-wide lens. So you can still get those wide-angle photos of landscapes and whatever else you’re minded to shoot.

All three of Samsung's new phones are equipped with Super Steady Video to stabilise the clip you’re shooting and eliminate the blurrycam effect that blights too many home movies.

To help you get better stills, Samsung has once more put the wizardry of Artificial Intelligence to work for a camera that’s smart enough to give you the best composition and automatically take the best possible picture for you. All you’ve got to do is point and let the most ‘intelligent Galaxy S series camera yet’ do the hard work.

A critical element of the camera AI is Samsung’s Scene Optimiser tech. This automatically recognises scenes and subjects (for example, food or sunrises) and adjusts colours and effects to give you the professional-looking images.

But the headline for 2019 is that Scene Optimiser now recognises ten more scenes and subjects, including cats and dogs. So you’ll have some excellent images to submit to the /awww section of Reddit.

Around the front, all three S10 phones have a dual lens camera that enables you to bring selfies to life with a so-called ‘bokeh’ depth effect, that blurs out background details and brings you and co-subjects into razor sharp focus.

If you want to be first in line to get the S10, you can pre-order it right now. In so doing, you’ll qualify for a free pair of cute and high-grade Samsung Galaxy Buds wireless headphones, normally priced at €149. While stocks last, of course.

These feature sonic technology from audio experts AKG and can be charged by placing them on the rear of your S10 handset.

The S10 will officially go on sale on 8th March.

Keen to find out more about Samsung's new headphones? Here's everything you need to know the Galaxy Buds.

Loads of colours to choose from

The colour palette for the S10 range takes in everything from an eye-catching shiny green to classic black and white shades. We’re especially taken with the canary yellow S10e.

Want an S10 on a monthly contract? Take a look at a wide range of deals for: