The Samsung Galaxy S8 is here.

After months of rumours, speculation and leaks, the Korean company finally pulled the wrappers off of its flagship device at a special event in New York.

But after all the hype, how does the Galaxy S8 stack up against its biggest rival, Apple’s iPhone 7?

Read on and we’ll give you an in–depth comparison, helping you decide which smartphone to choose.

Want to see how this year's Samsung compares to last year's S7 range? Find out in our head-to-head.

Samsung’s Galaxy smartphones have long been bigger and brighter than their Apple rivals. And the Galaxy S8 is no different.

Samsung says it’s the first phone to be certified as Mobile HDR. Premium by the UHD Alliance, meaning movies will look as intended by filmmakers.

While the two are very close in terms of performance, iOS tends to offer more regular updates and better security

Up front there’s an eight-megapixel camera with autofocus, designed to offer crisp and clear selfies.

The iPhone 7’s rear camera is a 12-megapixel effort with f1.8 aperture.

Samsung offers 64GB of on board storage with the Galaxy S8. But there’s also support for microSD cards up to 256GB in size.

Expandable storage is not something which Apple offers with the iPhone 7, but it does sell a variety of options, with 32GB, 128GB and 256GB models available.

Samsung has included an octacore processor in the Galaxy S8, clocked at 2.3GHz and with 64-bit architecture.

Put simply, that means it’s one of the most powerful smartphones available and will work at lightning pace.

By comparison, Apple’s A10 chip is a quad-core effort, clocked at 2.34 Ghz and with 64-bit architecture.

Only the hardest of the hardcore will notice the difference between the two devices’ performance.

Thanks to its size, the Samsung Galaxy S8 crams in a massive 3,000 mAh battery.

Apple says this is more efficient than previous models and, of course, Samsung’s phone must power a bigger screen.

But on the face of it, the Samsung Galaxy S8’s battery should last a lot longer. 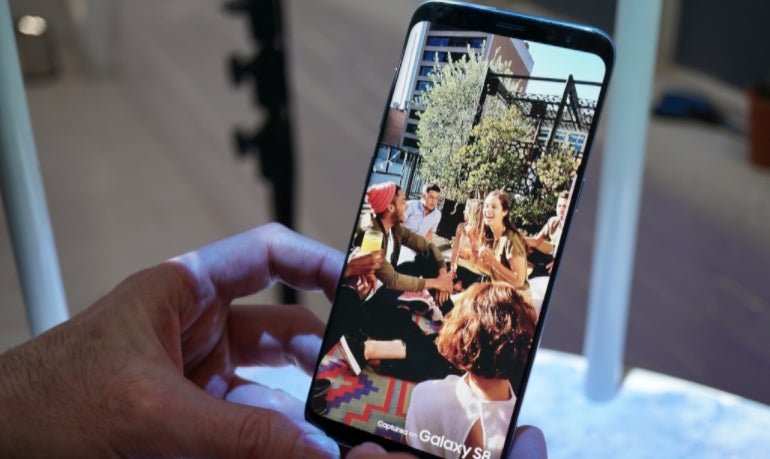 The metal finish of the Galaxy S8 is similar to last year’s Galaxy S7, but it stands out in one key area - there’s no home button on the front of the device.

This means there’s more space for the screen, with the home button and fingerprint scanner on the back of the phone.

Apple continues to use the same aluminium design for the iPhone 7 that’s been a feature of its smartphones since 2014’s iPhone 6.

That means that Samsung’s device has slightly better water proofing than Apple’s, with the ability to survive dunks in liquid deeper than one metre.

In reality, the difference will be hard to tell, with most suffering spillages and splashes rather than complete immersion of their device.

Samsung has added both iris scanning and facial recognition to the Galaxy S8, on top of the fingerprint scanning smarts used for its Samsung Pay platform.

The Galaxy S8 comes with Bixby, a new voice assistant which can be activated by either saying ‘Bixby’ near the phone, or pressing the dedicated Bixby button.

Samsung says it’s the most advanced system of its kind, capable of holding context aware conversations.

Apple’s Siri feels dated by comparison, only able to answer one question at a time.

However, plans are afoot to give it a major overhaul later this year. 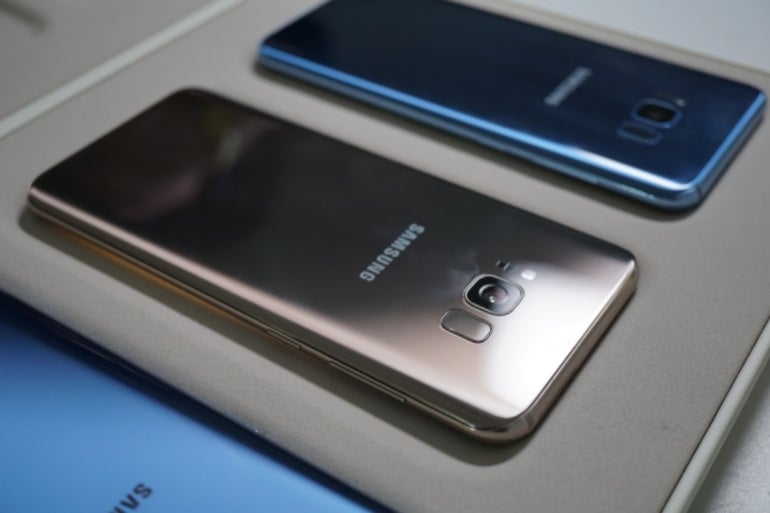 The Galaxy S8 is available in midnight black and orchard grey, with an arctic silver model coming later this year.